The "clone" of the Shaka (Sakyamuni) triad statue of the Horyuji temple, left, and its super clone at the Nagano Prefectural Art Museum in the city of Nagano. (Photos by Taro Yokosawa)
TARO YOKOSAWA, Nikkei staff photographerMay 8, 2021 08:00 JST | Japan
CopyCopied

TOKYO -- The cloning of cultural properties, the creation of highly precise replicas of important artifacts developed by Tokyo University of the Arts researchers, has continued to evolve.

Researchers have gone beyond just precisely duplicating works of art. Now, using cutting-edge technology and the fruit of their research, they are able to make them look exactly as they did when they were first created.

Their "super clone cultural properties" recreations include a Buddhist statue -- designated as a national treasure -- as it would have appeared 1400 years ago. Their works, in which digital technology and the artists' craft are merged, are now attracting attention as a new form of art in their own right.

The "super clone" of the Shaka (Sakyamuni) triad statue, a national treasure at the Horyuji temple, was first publicly displayed on Apr. 10 at the Nagano Prefectural Art Museum.

There the replica now has the same shiny gold appearance as when it was created in 623. Lost or chipped curls of hair on the head of the statue's central figure -- as well as a small ball of hair on its forehead -- have been restored and appear on the replica.

The position of the two smaller figures flanking the main one has been reversed in the replica, a decision based on how contemporary works were designed and other art history research findings. Flying heavenly maidens were also added around the halo behind the figures.

Highly advanced technology was used to create the replica. Granted permission by the temple and government authorities, researchers first used a high-definition digital camera and three-dimensional measurement to first collected data on the statue's shape and used a digital modeling system to recreate parts that cannot be measured such as the figures' backs and other damaged parts.

The researchers first built a prototype by assembling parts made using a 3D printer. X-ray fluorescence analysis of the composition of materials used in metal parts and their composition ratios enabled researchers to perfect the ratio of copper used in the casting, differing from the original composition by only several percent.

Based on the prototype, they completed the first clone of the statue. With original gold plating gradually falling off over the last 1400 years, local specialists in Takaoka copperware and Inami wood carving -- traditional handicrafts -- were enlisted to complete the casting and embellishing process.

The golden replica that finally went on show was made to even more faithfully reflect the original thanks to advanced 3D printing technology and an improvement in the casting method. 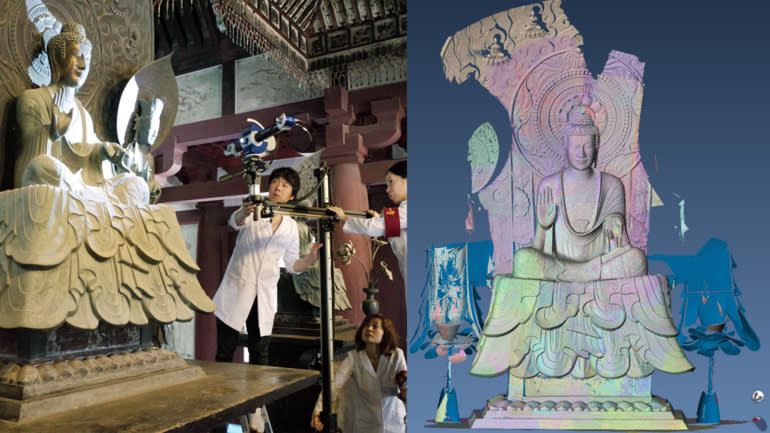 Researchers are measuring dimensions at the Horyuji temple in 2014, on left, and an image created using incomplete measurement data. (Photos courtesy of Center of Innovation of the Tokyo University of the Arts)

While there is no way of proving the correctness of the shapes of the flying maidens and the decision to reverse the positions of the flanking figures, Tokyo University of the Arts Professor Emeritus Masaaki Miyasako, who led the creation of the replica believes it serves a very important purpose.

"I want to promote cultural understanding, helping people see what people in the Asuka era [from 552 to 645] were thinking (about the statue) as the object of worship" by creating a replica that incorporates every possible piece of knowledge learned from the research achievements and historic data that have been passed down, said Miyasako. 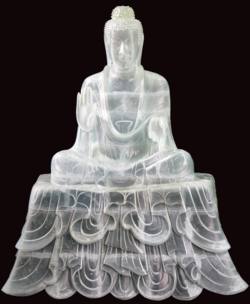 A plastic prototype created using three-dimensional measurement data. (Photo courtesy of Center of Innovation of the Tokyo University of the Arts)

The research team that led the replica's creation belong to the university's Center of Innovation, which aims to create new ideas and methods by the fusion of arts and technology.

The university's superior duplication, preservation and repairing techniques were coupled with cutting-edge technologies to create highly precise replicas of the artworks. The center calls them clone cultural properties and has developed super clones that recreate the works according to their original appearance.

For oil paintings, the center has developed an advanced technology to duplicate replicas including the precise contours of the oil paint, even duplicating the exact materials used, and for the frames as well. The method, for which they have obtained a number of patents, has created "clones" of Western paintings at France's Musee d'Orsay and ukiyo-e Japanese woodblock prints at the Museum of Fine Arts in Boston -- with the museums' permission. These clones have been on show in various locations across Japan.

With so many precious cultural properties and works of art not on show to the public to avoid deterioration of their conditions, such as the ukiyo-e woodblock prints and the Shaka (Sakyamuni) triad, there is growing interest in how the Tokyo University of the Arts' advanced technology can help to not only preserve various cultural treasures but also show them in public.

In 2018, the members of the university launched a company -- its first such endeavor -- that produces exhibitions and conducts negotiations with museums around the world on creating replicas of their most treasured assets.