TOKYO -- What is old can sometimes seem new again, as the adage goes. This is especially true in these late-postmodernist times, when many artists and designers still routinely quote or borrow long-gone styles and, winking ironically, imbue them with updated meanings.

One example is folk art, a label art historians assign to creations whose forms, materials and purposes are deeply rooted in traditions that are passed down from generation to generation and whose makers are usually anonymous. Its admirers understand that what often might be regarded as passe never really loses its freshness.

Recognizing these currents, the design historian Kentaro Hagihara has written a new book, "Nippon no Ustukushii Mingei" (Japan's Beautiful Folk Craft), which serves as an up-to-date introduction to appreciating the character and quality of some of the most enduring forms of Japanese artistic expression.

Published in Japanese by X-Knowledge, a Tokyo-based publishing company known for its architecture, design and history titles, Hagihara's book offers a summary of mingei ("folk craft" or "folk art"), whether it is viewed as a research field driven by collectors and connoisseurs, a mature art history category, or a sector for both the popular goods and fine art markets.

It also serves as a guidebook for exploring the world of mingei across Japan. Hagihara divides the volume into sections looking at each of the country's main regions, photographing and describing his discoveries of folk art and traditional craft museums, galleries and workshops in each location. (Although the book is in Japanese, it is lavishly illustrated with informative photographs. Each attraction's entry includes address and contact information, including a website URL, if available.) In a recent interview with Nikkei Asia, he noted that "Japanese-style, country-style, and regional, simple, handmade items and the stores that sell them are referred to as 'mingei products' or 'mingei shops,'" but also that the general public often does not understand just what can or should properly be tagged with the mingei label.

In the past, Hagihara worked for a company that imported modern design products from Scandinavia to Japan. He spent a year in Denmark researching northern European modern design and he brings an understanding of modernism's accent on the expressive power of pure form to his appreciation of shape, texture and the use of materials in mingei.

Hagihara begins his book by explaining that the notion of mingei as an aesthetic movement involving research, collecting and connoisseurship is only about a century old, even if the styles and production methods of the ceramic ware, basketry, ironwork, textiles and other creations associated with it date back many centuries.

Hagihara notes that the critic and aesthete Muneyoshi Yanagi (1889-1961), who is also known to Westerners as Soetsu Yanagi, is regarded as the founder of the mingei movement. Along with the writers Saneatsu Mushanokoji and Naoya Shiga, he founded Shirakaba, a magazine that examined Christian theology, Western art, and culture in general, in 1910. Merchandise on display at Kogensha, a folk-crafts store in Morioka, Iwate Prefecture. (Photo by Kentaro Hagihara)

Yanagi, who studied philosophy at what is now the University of Tokyo, became friendly with the British ceramic artist Bernard Leach (1887-1979), who was born in Hong Kong and had studied art in London. In the 1910s, he moved to Japan, where he learned about pottery making techniques, became involved with Yanagi and his group, and wrote articles for their magazine. Through Leach, Yanagi became familiar with the ideas of the British poet, painter and printmaker William Blake (1757-1827), and those of William Morris (1834-1896) and the late 19th-century Arts and Crafts Movement in Britain, with its emphasis on handmade, beautiful, functional objects for the home and everyday life.

It was Yanagi's encounter with pottery of Korea's Joseon dynasty, which lasted from 1392 to 1910, that led him to examine the indigenous, folk-craft traditions of his native Japan. In 1925, he and his collaborators coined the term "mingei." In 1936, Yanagi founded the Nihon Mingeikan (Japan Folk Crafts Museum) and became its first director.

Tucked away in a quiet part of Tokyo's Meguro Ward, its galleries are filled with old-fashioned glass display cases packed with many objects that look surprisingly modern. In one, a small, three-legged brass candleholder from the Edo period could easily have emerged from the pioneering modern sculptor Constantin Brancusi's Paris studio in the 1920s. Elsewhere, doughnut-shaped incense burners and a round, lidded ceramic bowl resemble the innovative designs produced at Germany's Bauhaus art and design academy in the 1920s. 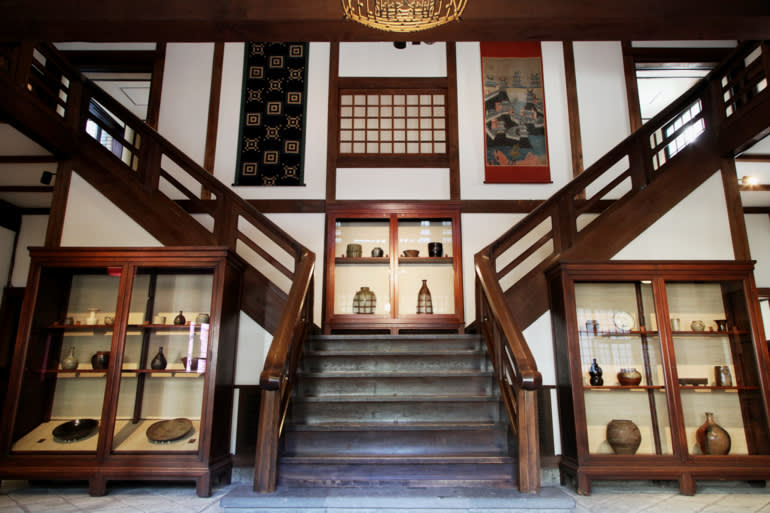 As Hagihara points out, Yanagi established the basic criteria that objects must meet in order to be classified as mingei. Among others, they must be made by hand and in quantity by anonymous artisans. They must be inexpensive and representative of the regions in which they are produced. And they must be functional and used by people in their daily lives.

In his book, Hagihara visits the Folk Craft Museum in Tokyo and describes a book-filled room in which the prolific Yanagi did much of his writing about mingei and aesthetics. In Tokyo's Ginza district, he explores Ginza Takumi, a store filled with folk crafts of every genre and material from all over Japan, which Yanagi and his colleagues founded in 1933.

In Kunitachi, to the west of central Tokyo, Hagihara looks at Kagoamidori, a shop specializing in baskets of all kinds, from those made with twigs to ones crafted from slats of bamboo. Its treasures include basket-woven flower pot holders, storage boxes, and ingenious carryalls and netlike "watermelon baskets" from Okayama Prefecture in southwestern Japan, made with braided, knotted grasses. 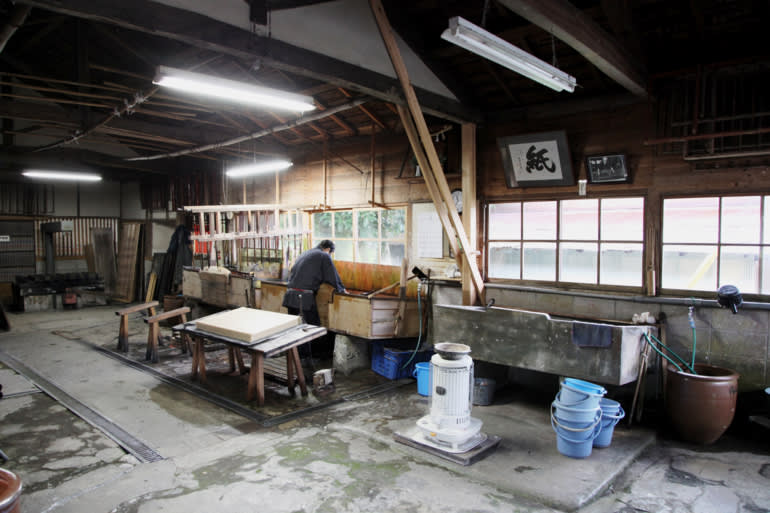 A skilled artisan makes the kind of traditional Japanese washi that is on view at the Abe Eishirou Memorial Hall in Matsue, Shimane Prefecture, a museum honoring the work of a legendary paper-making master. (Photo by Kentaro Hagihara)

In Tochigi Prefecture, north of Tokyo, Hagihara examines the displays at the Mashiko Museum of Ceramic Art, including an outdoor noborigama, or wood-fueled, climbing kiln, in which heat passes through round, connected chambers to fire the pottery inside them. Wood ash falling on the objects inside mix with the minerals in their clay to create a natural glaze.

Hagihara spent many months traveling around Japan in search of contemporary mingei artisans and retailers. In the town of Matsumoto, in Nagano Prefecture, he found the Chikiriya Craft Shop, which offers both ceramics and textiles. In Hida, the northernmost city in Gifu Prefecture, he discovered the Mishima Japanese Candle Shop, an increasingly rare kind of establishment in Japan. Its artisans have been making their waxy wares by hand for more than two centuries.

Hagihara observed that, nowadays in Japan, for some figures in the folk art and design fields, "the understanding of what is meant by 'craft' is changing." They now regard some creations that fall into the contemporary design category to be worthy of the "craft" label, even if they are mass-produced and made of plastic. Meanwhile, in Kanazawa, a coastal city in west-central Japan known for its lively cultural scene, the new National Crafts Museum was recently inaugurated. Showcasing the holdings of what was formerly the Crafts Gallery of the National Museum of Modern Art in Tokyo, this venue is Japan's only national museum specializing in craft arts. Its collection features works by many artisans who have been designated "Preservers of Important Intangible Cultural Properties" (more popularly known as "living national treasures") by Japan's national cultural authorities.

Hagihara's research -- and his enthusiasm about his findings -- remind contemporary admirers of inventive design and high-quality handiwork that they should not overlook the rewards of the classic and the traditional.

As Yanagi once said, sounding very much like a forward-looking modernist: "Make beautiful things. Make things to be used. Eliminate everything that is unnecessary."