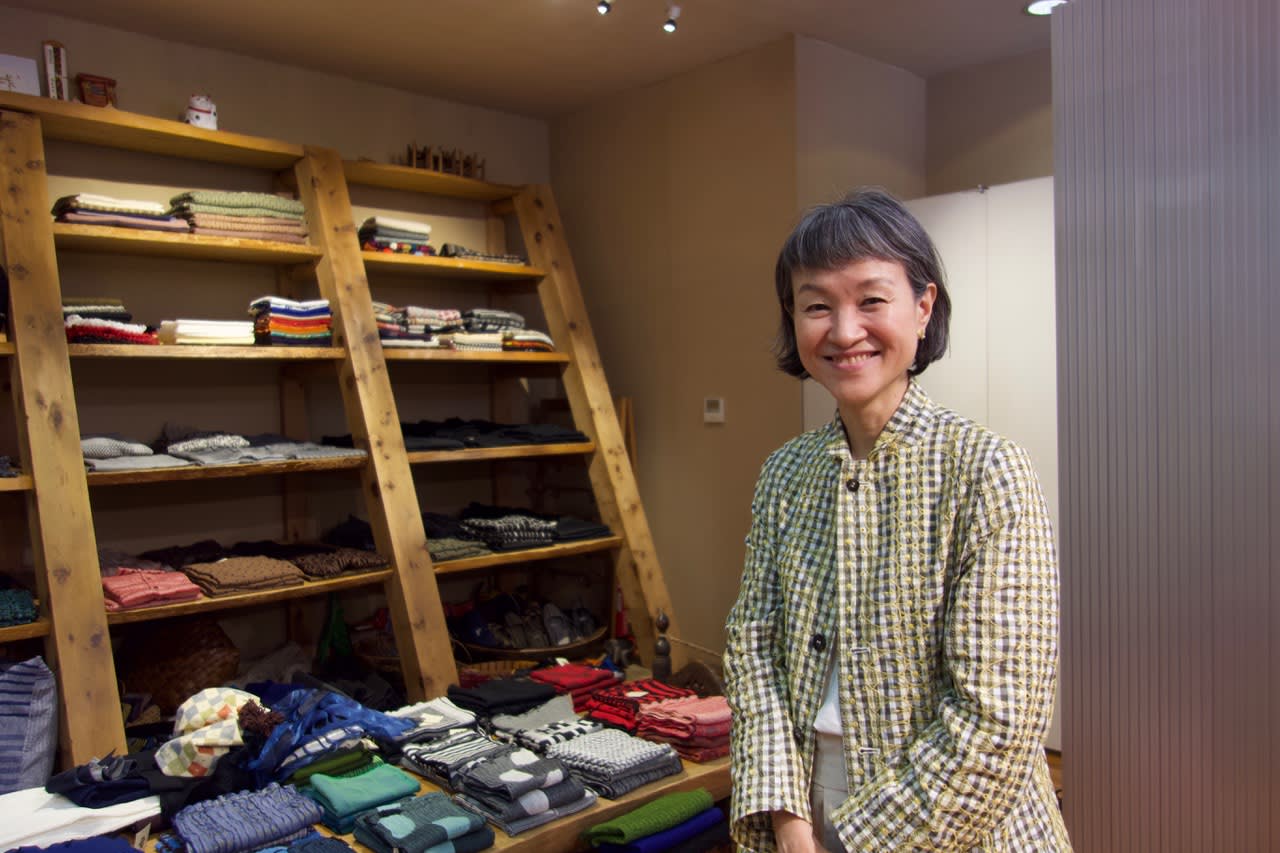 TOKYO -- Reiko Sudo, an internationally acclaimed textile designer, entrepreneur, college professor and champion of both preservation and innovation in the Japanese textile industry, enthusiastically welcomes admirers while standing beneath a swarm of more than 300 koinobori (carp streamers) -- colorful fabric windsocks resembling Japanese koi (carp). The streamers are suspended as if swimming from the ceiling of the main gallery of Tokyo's National Art Center.

Each streamer is made of textiles designed over the years by Sudo and her team at Nuno Corp., a company she owns and runs as artistic director. The installation, a collaboration between Sudo, French exhibition designer Adrien Gardere and visual artist Seiichi Saito, represents a cross-section of the 2,500 textile designs produced by Nuno since 1984.

On a recent afternoon, Sudo was introducing visiting colleagues, approving selfies taken by friends, and fielding phone calls from her husband, who was on a school bus full of children who had just attended the show. The energy emanating from the diminutive designer indicated how she has successfully managed to wear many hats over several decades.

Sudo was born in Japan's rural Ibaraki Prefecture. Her mother successfully ran an inherited building materials business while Sudo's father wrote haiku poetry. Sudo has had little formal business training, yet she has skillfully combined commerce and creativity in a distinctive manner -- building a solid business while expanding her artistic achievements and global networks. Her success, critics agree, owes much to her outstanding talent and formidable resolve.

Sudo, now 64, is among a rare group of innovative female entrepreneurs who began work in 1980s Japan. While she maintains a low public profile, her name and work are renowned in international textile and design circles -- with accolades including the Mainichi Design Prize (considered the ultimate design award in Japan), and an honorary degree from the U.K.'s University for the Creative Arts. 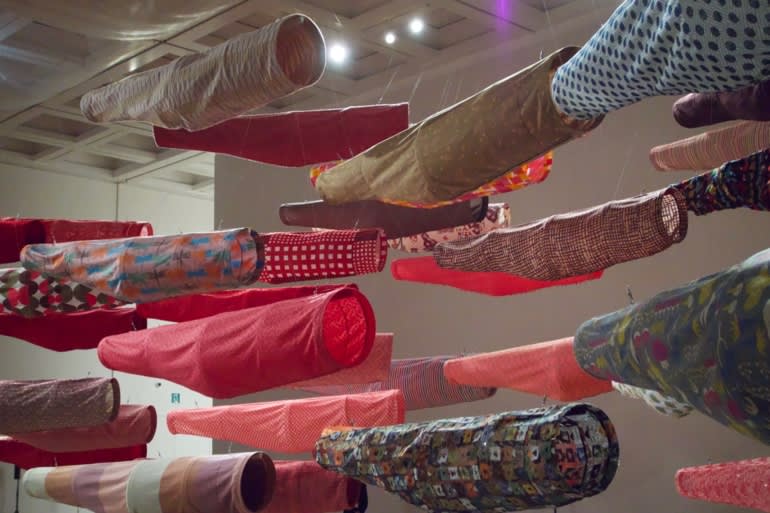 Matilda McQuaid, deputy curatorial director at the Cooper-Hewitt, calls Sudo "one of Japan's most important contemporary textile designers," and credits the Nuno designers with "remarkable creativity, which has led them to the forefront of the textile design field." The Jerusalem Center for Visual Arts has called Sudo "a weaver of new ideas."

Sudo's response to her growing international success is typically modest. "I'm not sure I've thought about role models or what it means to be a Japanese entrepreneur. I've been too busy working and raising a family," she mused quietly when asked about her early inspirations.

"While many women of my generation fought for position and recognition in corporate and creative fields dominated by men, I preferred to work in the background and to concentrate on my creative ideas while supporting Japanese artisans and textiles. I'm kind of shy and I don't like to be out front. I feel more comfortable as part of a team." Nuno fabrics are not mass-produced and included in museum collections around the world. (Photo by Sue McNab)

Luckily for Sudo, she met Junichi Arai at a Tokyo art gallery while still at university. Born and working in Kiryu, one of Japan's leading textile centers, Arai was a highly regarded craftsman who gained further recognition by creating fabrics for fashion superstars of the era, including Issey Miyake, Yohji Yamamoto and Kansai Yamamoto.

"When I saw Arai-san's textiles I fell in love," Sudo recalled. "I'd admired his work as part of the designers he worked with. After we met I had an opportunity to visit his workshop. When I saw the real fabrics, just held them in my hands as textiles, it had a strong impact on me."

Although originally trained as a painter, Sudo discovered a passion for textiles and studied at Musashino Art University. "When I left school and began to work I continued my friendship with Arai-san for love of what he was doing. I could see that working with fashion designers gave him an opportunity to explore himself creatively," she said. 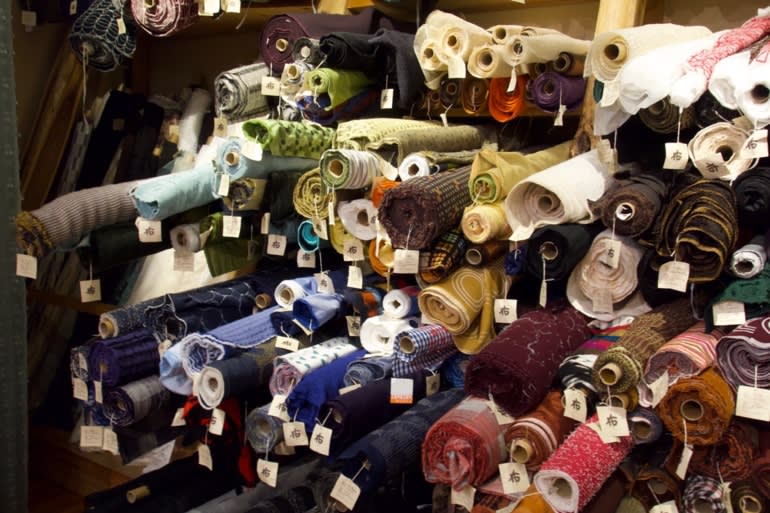 "We both agreed that he had no chance to see the fabrics in use by individuals in daily life. He had a dream of opening a shop in which he could sell textiles directly to consumers. One day he suggested we open a shop in Tokyo together."

At the time, Sudo was hand-weaving textiles, and decided to consult her husband, architect Kazuyoshi Sudo. "He was very honest with me and said he was sorry, but I didn't have much talent as a craftsperson. He encouraged me to take a leap by opening a shop with Arai. I had a deep knowledge of the craft involved in weaving, but no business knowledge whatsoever."

Arai had started Nuno in 1983 and Sudo joined the following year. They set up shop in the basement of Axis Building, a fashionable retail center in the Tokyo entertainment district of Roppongi, which remains the company's main outlet. "I'm so proud that we still have the original furnishings and sales shelves from the shop," she said with an easy smile. In 1987 Arai began to have financial problems across the several businesses he owned and decided to leave Nuno. Sudo was devastated, as was Hiroshi Ishibashi, Nuno's landlord. The Nuno store brought many people to Axis Building and he did not want to see Sudo leave. "He came to me one day and suggested I try keeping the store open, offering me financial terms that would allow us to keep the business going," she recalled. "I couldn't believe that someone would be that generous to me. It was amazing!"

With the support of Nuno's original investors and management, Sudo visited the artisans and craftspeople who produced Nuno's fabrics, as well as the company's franchises in Kyushu and Hokkaido. To her surprise she received only encouragement. "I was 32 years old and running a business on my own. I just wanted to try it and find out what kind of talent I had," she said. Designer Kazuhiro Ueno has several pieces in the permanent collection of the Museum of Modern Art in New York. (Photo by Fran Kuzui)

"I began by contemplating what it meant to be a true textile designer. I decided it was not just someone who is drawing and thinking about material. I also felt a responsibility to promote the artisans and craft persons working in the industry and to introduce our Japanese weaving traditions to the world. I strongly felt a need to preserve our weaving heritage. Once I decided that was my mission, I felt totally relaxed and confident."

Thus Sudo began her multifaceted journey. Over the years she has steered Nuno into the development of a fashion line, collaboration with retail giants such as Japan's Muji and Germany's Knirps, and experimented with weaving, finishing and dying techniques utilizing both old practices and new technologies.

Under Sudo's guidance the Nuno team has pushed boundaries with an eclectic mix of materials ranging from silk to polyester, handmade paper to metals, and recycled plastic bottles to peacock feathers. Nuno has explored finishing methods using rust-dyeing, salt-shrinking and caustic burning, while exploring many dyeing techniques. "The textiles are created as multipurpose fabrics, but not mass-produced," Sudo said with pride. "Many are woven on the same looms as are used for traditional obi, the sashes worn with Japanese kimonos. 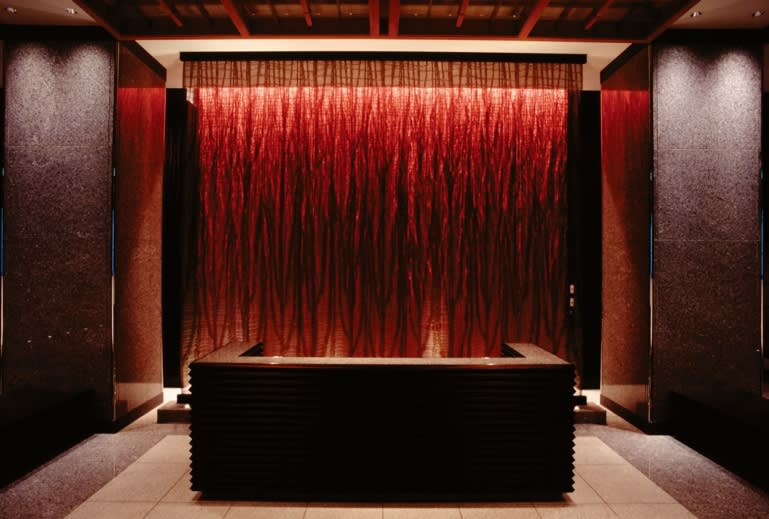 Sudo and her team at Nuno worked with architects at the Mandarin Oriental Tokyo to supply textiles for the overall design. (Photo by Tadashi Okochi)

"Each member of our team contributes to the creative and business side of Nuno and each shines in their own way. Kazuhiro Ueno, one of our chief designers, is a heavy smoker and while still a graduate student he started experimenting with cigarette burns in fabric. He created a vest which won design awards and I asked him to join my team right away," Sudo recalled.

"When New York's Museum of Modern Art acquired some of our textiles for their permanent collection I was so thrilled that his designs were selected too. It is very important to me that every member of the team is represented creatively. While I am the artistic director of the company, each designer contributes to the image of Nuno. At the same time each member must work in the shop and interact with customers. Nuno survives because it is the meeting place between makers and consumers."

Over the last 12 years Sudo has led the Nuno design team in an ongoing large-scale interior design project using textiles for the Mandarin Oriental Hotel in Tokyo. She is also on Muji's advisory board. "They are two of the projects of which I'm most proud," Sudo said. "Most importantly, after the tragic earthquake and tsunami of 2011 in northern Japan, the Mandarin Oriental and Muji's commitments to Nuno helped us to keep many artisans in business."

Next up for Sudo and her team at Nuno? "We are negotiating with museums in Hong Kong, Shanghai, and throughout Asia to exhibit the koinobori," she explained. "I hope they can swim all over the world!"