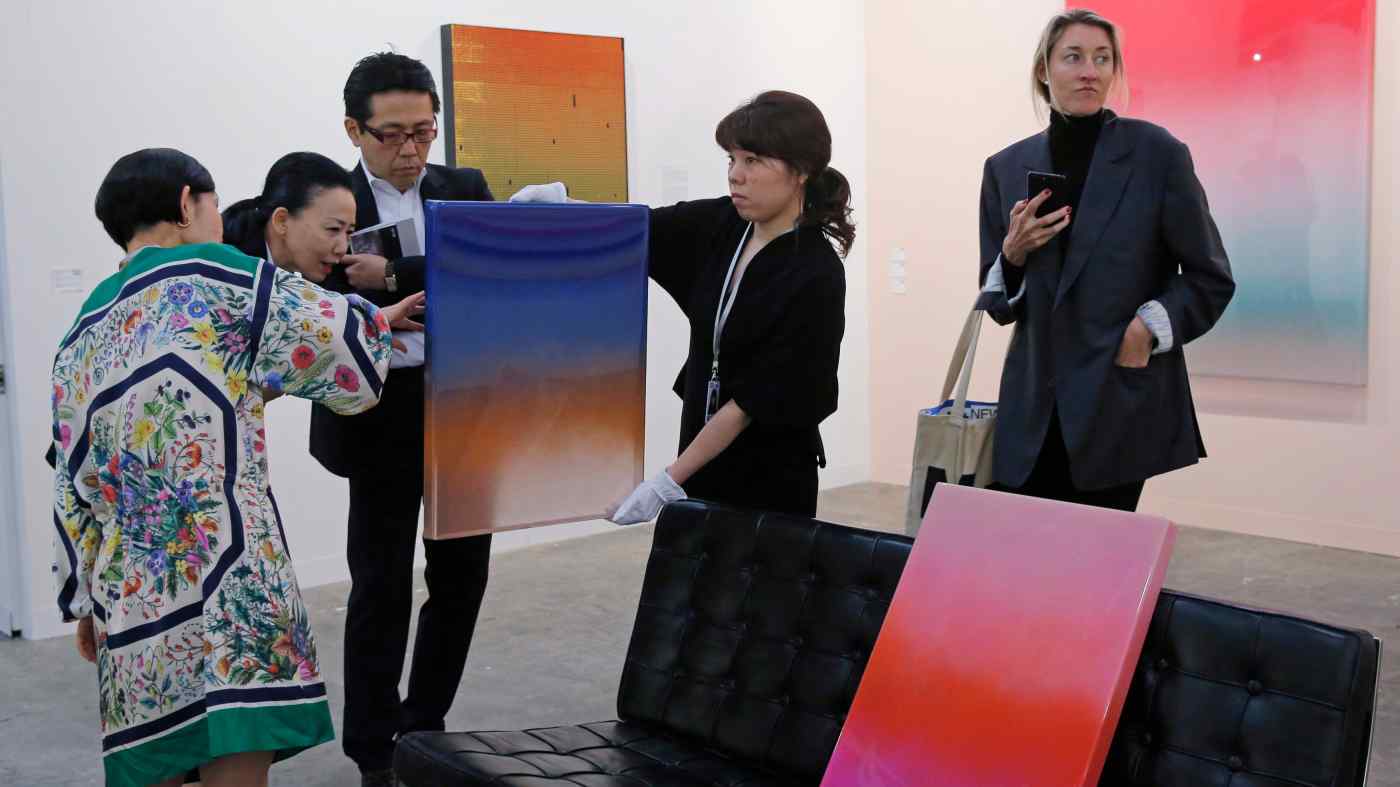 Tokyo's effort comes as Hong Kong, the region's largest art market and a global hub alongside New York and London, copes with a national security law that threatens to disrupt creative expression.

"These changes [in Japan] are just going to release a huge amount of excitement that will draw response from the art world as long as collectors appear," Marc Glimcher, the chief executive of Pace Gallery, one of the mega-galleries based in New York, told Nikkei Asia in a recent interview.

Glimcher cited Japan's rapidly growing presence in the art world at the end of the 1980s, when many luxury works were purchased by Japanese businesses riding high on the economic bubble.

"If Japan truly reopens, it has the potential, once again, to become one of the centers of art market in Asia," he said. Pace is “considering” to open a location in the country and is now in “some level of conversations already.”

Glimcher praised Tokyo's deregulation in February to allow art galleries, auctions and art fairs in customs areas without import procedures and payment of duties and taxes. These payments could total millions of dollars for highly valued works.

The taxes, which are required if such works are purchased and delivered to Japan outside of the country's free port zones, can be omitted if the art is sent abroad from these customs areas.

Dealers previously had to pay a hefty tax when displaying or selling artwork brought from overseas to galleries and auction sites in Japan, as existing customs areas had severe restrictions on entry and restoring period.

Taro Kono, who as minister for regulatory reform enacted this change together with other ministries, said in a recent blog post that it "will foster new possibilities in Japan."

"Some galleries around the world may have been reluctant to enter the Japanese market," said Kono, who added that Japan will encourage them to do so. Katsura Yamaguchi, who heads Japan business at auction house Christie's, also thinks the change will spark foreign art fairs in the country, though the U.K.-based company does not plan to hold auctions in Japan.

Although collectors in Japan can restore what they purchased abroad at such a customs area, he said, these various advantages may have a greater impact on foreign art dealers and collectors, bringing them into the country more often.

Global sales of art and antiques totaled $50.1 billion in 2020, down 22% from 2019 due to the COVID-19 pandemic, according to the Art Basel and UBS Global Art Market Report unveiled in March.

Sales in greater China account for 20% of the market, boosted by wealthy mainland collectors and trading in Hong Kong, which hosts the world's largest fair, Art Basel. But Japan's art market is painted as having the potential for growth. The country ranks third in dollar millionaires after the U.S. and greater China, per the art market report, and also is a popular destination for foreign tourists, receiving 31.9 million overseas visitors in 2019.

"Many visitors to Art Basel in Hong Kong stop by Tokyo and other cities in Japan with their private jets before their return for some tourism," said a person involved in the global and Japanese art markets, explaining the country's potential to enhance its tourism industry by attracting people from art communities.

Kono, who noted in his blog post that Japan now can conduct art business like in Hong Kong, also stressed the possibility of Japan becoming an alternative to the Asian art hub.

"With the destruction of the 'one country, two systems' and the loss of freedom in Hong Kong, foreign buyers will eventually no longer gather and trade art and jewelry in Hong Kong as they used to," he said bluntly. "In order for Japan to play a role as a market to replace Hong Kong, I would like to start revising laws and regulations and building infrastructure for the art market."

Though many in the industry expect Japan to emerge as a new regional center of gravity for the art market, they remain skeptical about the country pulling resources from Hong Kong.

"We are very established in Hong Kong, and it allows us to connect with so many people from all around the region," Glimcher said. "It is very hard to compete with this gateway."

But he added, "Hopefully, political tensions will not [impact Pace's business]," saying that such tensions, in general, may drive away collectors who feel too exposed or spark strong reactions from artists toward anti-democratic behavior, "which creates friction in the system."

Pace, which closed its Beijing gallery in 2019 amid the escalating U.S.-China trade conflict, announced plans this month to expand its location in Seoul. Pace Gallery is opening an expanded gallery space in Seoul in May. CEO Marc Glimcher says "what we will see is expansion [of the art market] more than change." (Photo by Sangtae Kim, courtesy of Pace Gallery)

"China's strategy in Hong Kong will be closely watched by artists and the art world," Glimcher said, "but what we will see is expansion [of the art market] more than change. The art world is very small and has an amazing ability to grow."

A person involved in Hong Kong's art industry reported being unaware of any galleries leaving the city because of current political developments.

"There may be self-censorship on what is shown publicly, but what is being collected is not being affected as far as I know," said this person, who requested anonymity. "There is no direct political pressure on art galleries."

"The Hong Kong government's investment in the art infrastructure will pay off," such as the M+ museum focusing on visual culture planned to open this year, and West Kowloon Cultural District, where numerous art venues are located, the anonymous person said.

Christie's Yamaguchi said that achieving a scale in Japan similar to Hong Kong's role in bridging artists, dealers and customers is very challenging. He suggested that Japan also consider changes to its inheritance tax system.

"Facilitating art deals with customs is meaningful, but it is necessary first to make a foundation of art in the country," Yamaguchi said. "For example, opening a branch of a globally known museum, just like how Spain's Bilbao has Guggenheim, can attract not only tourists but also people involved in art."