KYOTO, Japan -- A hostess pours sake for Hiroto Rakusho in the private bar of one of Kyoto's long-established ochaya teahouses, where geishas entertain visitors with traditional song and dance. Suddenly Rakusho erupts into a belly laugh, eliciting elegant giggles from several kimono-clad women.

This rarefied atmosphere might be incongruous for a laid-back contemporary artist wearing chic, flowing garb he has designed himself, were it not for Rakusho's family history. He is not only a guest at the bar, but a neighbor and member of the close-knit community of Kyoto artisans and custodians of its traditions.

His abundant good humor belies a struggle to find a new direction for ancient artistic conventions -- specifically, he is redefining what it means to be a traditional gold-leaf artist certified by the government as a Master of Traditional Handicrafts.

"The Nishijin area is located in northwest Kyoto and is the traditional weaving district, dating back many centuries," Rakusho explained over tea and sweet bean cakes at his studio worktable. "I was born into a world filled with gold and silver and surrounded by the beauty of Japanese arts.

"'Tigers in Bamboo Grove," installed at Kyoto's Tenkyuin Temple: The Tsuzuri Project attempted to create replicas that resemble the original screens as they appear today. (Courtesy of Canon)

"In this world the young observed elder artisans and learned their craft. During my early years Nishijin arts were in high demand and our family business was flourishing with many employees. My goal was to become a master craftsman, and I studied diligently under my father."

The elder Nishiyama encouraged his son to pursue a college education, studying modern painting at Kyoto Zokei University, which specializes in art. "I was drawn to abstract painting and its emotional component, which I felt was similar to that of kimono design," he recalled. On graduation, Rakusho worked for a kimono wholesaler, and traveled throughout Japan, acquiring fabrics and a deeper knowledge of textiles. 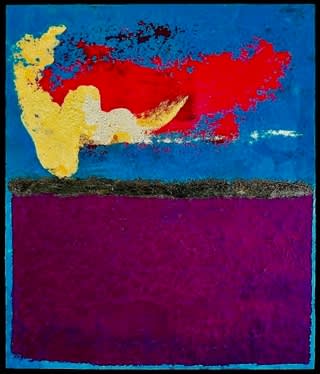 When it came time to return to Kyoto and his father's business, he concluded that popular demand for costly formal kimonos would become increasingly limited. He also found that working with gold and silver required huge amounts of time and skill, and gradually realized that Nishijin fabrics could not compete with cheaper gold-leaf textiles coming into Japan from abroad. His craft was at a crossroads.

"I had to make some difficult decisions. My brother was eager to take over the family business and keep it going," he recalled. However, it was a family crisis that eventually set Rakusho on his current path: After his marriage broke down, he found himself a single parent of three children under 10. "I wasn't sure how to support my family financially and live as a single parent. I looked within and just took a leap," he said. In a break with tradition, he changed his family name from Nishiyama to Rakusho and began his journey as both a fine artist and artisan. Loosely translated, "Rakusho" means "rolling stone."

"Most important to me was forward movement. I wanted to be free of conventions and open to exploring the boundaries of my craft. I made a great effort to combine traditional and innovative techniques with new ideas," he said.

Rakusho began painting with metals and creating contemporary works of art and design. Collaborations with other Japanese artists followed as did international relationships in the U.S. and Europe.

His fine art includes abstract paintings utilizing both gold leaf and silver, large-scale images of the moon, and folding screens. His work has been exhibited at the Louvre, the Hosomi Museum in Tokyo and in New York and the Middle East.

"I've tried many things and enjoyed seeing my art and collaborations go worldwide. But no matter what I did, the Nishijin in me pulled me back to my roots," he said.

As director of the Kyoto International Cultural Foundation in 2004 Rakusho became familiar with the need to preserve Kyoto's rich cultural past, especially byobu (folding screens). Often richly decorated with gold leaf and exquisite paintings, these screens are commonly housed in temples and shrines, where they are vulnerable to the elements.

"During Japan's Meiji Period (1863 to 1912) the government decreed a strict separation between Japan's indigenous religion of Shinto, and the imported beliefs of Buddhism," Rakusho said. "Many Buddhist works of art were destroyed or sold to the West by Buddhist temples hoping to keep themselves subsidized after they lost government support. Many exceptional masterpieces now reside as far afield as the British Museum in London and the Metropolitan Museum of Art in New York. We were also looking for ways to bring the works home as replicas."

In 2007 Fujio Mitarai, chief executive of the Japanese imaging product maker Canon, committed the company's technical expertise to the Tsuzuri Project, a collaboration between Canon and the Kyoto Culture Association, a Japanese non-profit organization. Their goal was to replicate original artworks in fragile condition, and those housed in precarious environments, placing copies at the original locations, where they could be seen while the originals were preserved elsewhere. They also created a program of repatriating artworks held by institutions outside Japan through donated replicas that could be reinstalled in temples, shrines and museums.

"Mitarai-san hoped that Canon could be instrumental in restoring and preserving the beauty of ancient Japanese culture and wanted to create continuous access to these analog works in a digital world," said Canon General Manager Junko Kimura.

"Originally there were several purposes for using gold leaf," Rakusho said. "Foremost it conveyed a sense of beauty. For the ancient samurai, the precious nature of gold communicated a sense of authority, wealth and power. Some considered gold leaf essential because it reflected candlelight into a room and added elegance. My purpose has been to not only preserve Japanese cultural heritage, but to create a new luminous beauty with gold leaf."

Rakusho developed a patented process of applying gold leaf to the Canon facsimiles. "Gold leaf was originally applied by hand in sheets," he explained, sitting at his desk, hands gliding over what looked like an aged screen adorned with birds and peonies. "The Tsuzuri Project decided not to replicate the original condition of the screens using gold that appeared new. Instead we wanted to recreate ... the beauty of something that has aged over the years."

"I set to work using my knowledge of metalwork and consulted with other artisans over the use of (traditional) washi paper, on which the facsimiles are printed. I eventually developed a process in which the glue I use under the paper can interact with the metal as I apply it to the screen, and it determines the patina of the surface."

It has taken a decade and 11 stages of development for Canon to create and donate 38 works in reproduction. The addition of gold leaf has given the artworks soul, as in a series of luminous screens by Kano Sanraku and Kano Sosetsu that the Tsuzuri Project took five years to recreate for Kyoto's Tenkyuin Temple. The 21st generation abbot of Tenkyuin stands before a section of "Tigers in Bamboo Grove." (Photo by Fran Kuzui)

"Rakusho-san's work on the screens gives them meaning. Without him they would look flat and motionless," Yasunori Hisaka, the 20th abbot of Tenkyuin, told the Nikkei Asian Review. "Upward of 300 visitors per day come to our small temple to see them. Without the Tsuzuri Project these masterpieces would rarely be viewed due to the necessity for preservation."

There is much debate among critics about whether facsimiles can be treated as genuine art. To Rakusho, the screens are not just restorations but have artistic merit in their own right. "I am trying to preserve Japanese cultural heritage while creating a beautiful new work of art," he said.

Yuji Yamashita, an art critic and professor at Meiji Gakuin University, recently argued that the Tsuzuri project was an example of a new style of art. "I intellectually know the screens at Tenkyuin are technically replicas, but my eye does not understand that and sees an original," he told a local journal.

The Tenkyuin screens, now permanently installed at the temple, are on view until March 18, 2019, and will be displayed periodically in the future. Rakusho's fine art can be viewed at Art Fair Tokyo, Asia's oldest and largest art exposition, from March 8 to March 10.