Japanese tech powers the creation of art -- and profits TOKYO -- When Kazuki Umezawa saw the volumetric prototype of a figure which had been developed using Japanese imaging company Ricoh's StareReap technology, he was surprised to see how neatly the body parts of characters he had drawn with such wild -- even primitive -- lines and notches had popped up in sharp relief.

"Even though I expected this outcome, I was excited by the immersive feeling it offered when I actually saw it," Umezawa, 36, told Nikkei Asia. "The 2.5D printing complements the creation."

Better known for cameras and office equipment such as laser printers and photocopiers, Ricoh opened its first art gallery earlier this month at the main crossroads of Tokyo's luxury Ginza district, where 15 artworks developed by Umezawa using the StareReap technology are currently on display. Another exhibition featuring a Japanese photographer will start July 10.

"We want to produce original art in collaboration with artists, rather than mass reproduction," said Toshihiro Nomura, general manager of Ricoh's StareReap project.

Ricoh is the latest example of a Japan Inc. icon pushing into the art sector in search of new business, not only by powering the creation of the art itself, but by enhancing the way people can access existing artworks. As traditional markets mature, Ricoh and other companies such as NTT East, are exploring ways to add value to the various technologies and infrastructure they have developed over decades.

Launched as part of an in-house business incubator program, StareReap is an attempt to reconfigure the business model for printing technology. During its collaboration with Umezawa, some of the artworks created by Ricoh's three "printing directors" involved stacking up to 150 individual layers of resin -- each just 23 microns thick, about half the width of a human hair -- on top of each other. (Photo by Yuki Kohara)

For several years, Ricoh has been reproducing some of the world's art masterpieces such as works by Dutch painter Johannes Vermeer, which is generally done only after paying a license fee to the owner. But participating in the actual art production process means turning "our engineers into artists," Nomura said.

To reproduce the small irregularities on the surface of a particular art object involves several intricate, technologically advanced steps -- first the object must be scanned, then processed into a 2.5-dimensional image and printed using special ink technology to replicate the object's sharpness. Ricoh's original inkjet technology, which allows printing on diverse media, served as the basis for this development.

During its collaboration with Umezawa, Ricoh's three "printing directors" used data provided by the artist to produce 150 layers of resin, each just 23 microns thick -- about half the width of a human hair -- and stacked them on top of each other to create a sculpture in relief that cannot be produced manually. Umezawa then added brilliant gold touches with his hands to finish off the piece.

"Printing directors all have their own originality," said Tatsuyuki Hayashi, one of the three printing directors for Umezawa's pieces. "Some are good at editing photos, while some are keen on expressing detailed irregularities."

Not only does the printing director need to have a deep knowledge of the printing technology itself, but an affinity for the compatibility of the various materials and ink is also essential. Being directly involved in the creation of a work of art is something new for Ricoh's engineers, and "this made me want to do more and more things," Hayashi said.

Ricoh aims to turn a profit from this kind of collaboration within the next two years, partly by selling the finished pieces. Ricoh is considering whether to spin off its fledging art production business into a separate company.

The company is currently hosting an exhibition in Tokyo's Shinjuku district dedicated to Japan's woodblock masters Hokusai Katsushika and Hiroshige Utagawa of the 18th and the 19th centuries -- developing new tricks to dive into some of their most famous works. Inside a small room displaying Hokusai's "Great Wave off Kanagawa," visitors have the sensation of actually diving into the sea. (Photo by Yuki Kohara)

Entering a small room displaying Hokusai's Great Wave off Kanagawa, for instance, visitors begin to feel as if they are actually diving into the sea themselves, with the walls, ceiling and floor all displaying images of deep, dark blue sea water teeming with fish and other ocean creatures including a giant octopus. Called a "3D dive theater," the enhanced virtual reality show enables people to feel the dynamism of the wave in the picture.

Together with image processing technology provider Ars Techne, the exhibition includes over 100 printed replicas, which were digitized with 2 billion pixels to convey the most exact details, even the fibers of the original Japanese paper and the unevenness of the printing. So precise are the replicas that viewers can enlarge various details using a special touchless screen.

Several framed "online pictures," which change automatically as time passes, are also on display. More artworks processed by Ars Techne are saved in NTT's private data center, which is separate from its public network for security reasons.

As telecommunications services move to a flat rate tariff model, "we are now proactively working on how to promote the use of communications," said Manabu Kunieda, CEO of NTT ArtTechnology, a subsidiary of NTT East established in December 2020 to focus on the art sector.

In addition to exploring new ways to enjoy art, NTT East's digital network can also be used to help preserve cultural properties from loss and damage caused by natural disasters and degradation over time, Kunieda added. 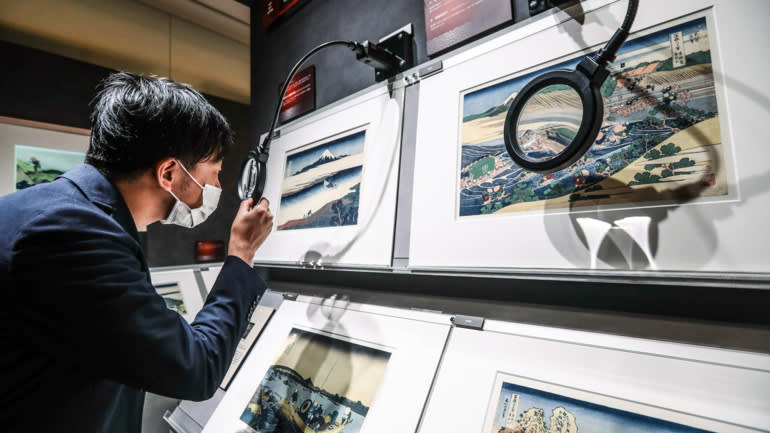 Digital replicas of famous Japanese artworks can convey the most minute details, even the fibers of the original Japanese paper and the unevenness of the printing. (Photo by Yuki Kohara)

"There is always a high risk of data leakage when dealing with an image data that looks real in an open network," said Iwao Kubota, CEO of the company which is the only licensed digital data provider for the Musee d'Orsay in Paris. "NTT East has a separate infrastructure from the open network, so this makes it much easier to develop new business with our digital replicas."

NTT ArtTechnology is working on the idea of a dispersed satellite museum, displaying online pictures at diverse venues, from airports and hospitals to offices, and streaming artworks from regional museums at the same time.

"This would contribute to regional revitalization by eventually sending viewers to the museum," Kunieda said. It is also a viable option to offer art amid COVID-19, which has made it difficult to welcome hundreds of visitors to the same venue. "Digital technologies contribute to all aspects of museums' roles," he said.