KUALA LUMPUR -- In February 2013, I stood with thousands of Malaysians before an impromptu stage on the sports field at Han Chiang University in George Town, the capital of Penang State. "Are you ready?" The words of Malaysia's Prime Minister Najib Razak cut the tension like a hot knife through butter.

No one was much interested in the now-disgraced Najib -- then the leader of Malaysia's ruling Barisan Nasional coalition; now out of office and sentenced to 12 years in prison for corruption (though not yet in prison). But we were itching to see Park Jae-sang, the South Korean K-pop sensation who performs as Psy and is best known for his hit song "Gangnam Style."

Najib had hired Psy, who had never previously played in Malaysia, to perform his galloping dance number during a general election campaign at an estimated cost of $300,000 -- part of a desperate effort to snare crucial votes in opposition-run Penang.

Psy's improbable involvement in Malaysian politics made little practical difference -- Najib's coalition won the election and the opposition won the most seats in Penang -- but it demonstrated how K-pop has become entrenched in Malaysia, the genre's seventh-strongest global market according to a poll by #KPop Twitter 2020. In 2017 dancer Isaac Voo, from the Malaysian state of Sabah, was one of eight winners in the South Korean reality competition Boys24 who went on to form the K-pop band IN2IT.

However, Malaysian pop music is now moving away from idolizing its South Korean model, and is forging its own identity as local performers negotiate a path between global music styles and a conservative skepticism about popular music that still resonates among the majority Muslim population.

Some music fans still dismiss local groups as little more than glaring copies of South Korean sensations such as the successful girl band Blackpink -- a claim repeatedly aimed at Dolla, a four-strong Kuala Lumpur dance-pop girl-band signed by Universal Music Malaysia in 2019. But Dolla, which features two ethnic Malay girls, Sabronzo and Syasya, and two ethnic Chinese, Angel and Tabby, is different from its K-pop-influenced origins.

The group sings in Malay, reflects the country's ethnic diversity, and describes its output as M-pop rather than K-pop. "We may dance like K-pop bands, but we don't sing in Korean," said Angel. Nevertheless, the group's sultry dance moves, revealing outfits and hairstyles comply with global girl-group tropes and promote girl empowerment, defying the stereotype of virtuous Islamic females that is predominant in Malaysia. "A big part of our dream is to let all the girls out there know that gender is no boundary," said Tabby. "Women are often stereotyped as small and weak, but in 'Watch Me Glow' especially, we worked on communicating a fierce and strong energy to show that anyone can achieve big things with enough determination and hard work."

Dolla has maintained its momentum despite widespread suspicion of foreign styles of popular music, which many Malaysians see as dangerous vehicles for budaya kuning (yellow culture) -- a catchall term for Western influence.

This social conservatism has primarily affected local black metal bands, which became the targets of police harassment and fearmongering media campaigns in 2001 and 2006 under former Prime Minister Mahathir Mohamad, and also caught out many foreign mainstream American pop artists such as the Pussycat Dolls, Gwen Stefani and Beyonce, who have had to pay fines or change their stage acts to perform in Malaysia. In 2012, a Kuala Lumpur concert by Grammy-winning Afro-American singer Erykha Badu was canceled after it emerged that she had the word "Allah" tattooed on her upper body in Arabic script. There has been some change in attitudes in the last five years, including an opposition victory over Najib's government in 2018, which opened the way for prosecution of the former prime minister (although the Barisan Nasional coalition is now back in government following a parliamentary realignment). "Since 2015, Malaysia has come quite a long way with its changes to leadership and government," said professor Joanne Lim Bee Yin of Nottingham University Malaysia, co-author of "The Korean Wave in Southeast Asia."

"While a female group like Dolla might have received harsh criticism back then ... I believe that our nation has matured in that aspect, and such local girl-groups may now see great potential," said Lim, who also suggested that the new TikTok social media culture enabled "copycat dancing" to receive less scrutiny from religious groups and individuals. 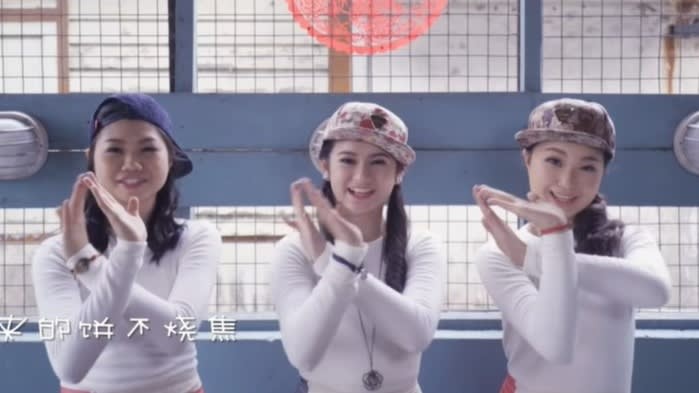 There are very few all-girl bands in the history of Malaysian pop music. Before Dolla, Mandarin-singing groups like Four Golden Princesses, M-Girls, and Q-Genz, pictured above, played tame "Mandopop" and recorded countless Chinese New Year albums for the local and overseas Chinese-speaking markets. (Screenshot from YouTube)

However, Malaysia's path to artistic freedom is experiencing simultaneous resistance from the most conservative among fans and performers, who continue to perceive foreign popular music as a bad influence. This has led to the release of a number of bowdlerized versions of songs deemed unacceptable by social conservatives.

In October, for example, Rabithah, a male Islamic vocal group, released "Hatiku" ("My Heart"), a sanitized version of Blackpink and Selena Gomez's racy hit "Ice Cream." The group's cover features rewritten lyrics focusing on religiosity and God that are a far cry from the South Korean group's original, which is laden with double entendres and sexual innuendoes.

"By changing the lyrics [we are] making it easier [for kids] to choose a more positive form of entertainment," said Usamah Kamaruzaman of Tarbiah Sentap, the record label of Rabithah, which garnered more than 248,000 views for its clean-cut cover in less than a month after its video debuted on the record label's YouTube channel. Usamah added: "This huge segment of audience truly appreciates what we have done, and that's probably the main reason behind the song's skyrocketing views." However, "Hatiku" is a modest success compared to "Dengarilah," by vocal group The Faith, an Islamic cover of Luis Fonsi's hit "Despacito," which was banned from Malaysian state radio and television in 2017 because of its allegedly obscene lyrics. The Faith's cleaned-up version received more than 3 million views on YouTube.

Some social conservatives think that Rabithah's treatment of Blackpink's "Ice Cream," and the success of The Faith's Islamic cover show that strict controls on popular music remain a social necessity in Malaysia, suggesting that bands such as Dolla may never be able to employ the explicit innuendoes of their female South Korean peers.

"[We don't know] whether K-pop is suitable for Malaysians, and we prefer not to single out any specific genre or race," said Usamah, "but any entertainment that promotes negative values ... should be banned, even if the artist is a Malaysian."