From painting to traditional poetry, they fight against New Delhi's takeover A portrait of a young Kashmiri girl in traditional attire by artist Hina Arif. Hina started to make paintings of Kashmiri architecture and people to help preserve the local culture, which she believes the central government is trying to wipe out. (Safina Nabi)
SAFINA NABI, Contributing writerJuly 27, 2020 04:00 JST | India
CopyCopied

INDIAN ADMINISTERED KASHMIR -- When the central Indian government stripped the region of Jammu and Kashmir of its autonomy in August 2019 and imposed a communications blackout, the people of Kashmir wanted to fight back. Now, female Kashmiri artists are using their pens, poems and brushes to resist.

Last autumn, Hina Arif, 28, who lives in central Kashmir's Srinagar area, started to make paintings of Kashmir's old architecture and people in traditional attire because she believes that the central government has been bent on wiping out Kashmir's culture over decades.

"If I cannot do anything at least I can preserve this architecture and people's daily life in my paintings," she says, taking inspiration from different photographers who capture everyday goings-on in Kashmir. If her generation does not resist, she thinks, future generations will never know what a daeb, or wooden balcony emblematic of Kashmiri houses, was, or a pheran cloak.

She is solely working to preserve architecture and Kashmiri lifestyle -- she does not sell her paintings: "I don't paint to earn a living, I paint to resist and preserve." Hina, who completed her Master's in fine art at Delhi's Jamia Millia University, always wanted to highlight to non-Kashmiris the sufferings of those in Kashmiris, but after India's constitutional change, canceling Article 370, which granted Jammu and Kashmir special status, she immediately returned home from Delhi and shifted her focus to preserving art and culture.

Accompanying that change was the communications and media blackout to keep Kashmiris from telling the outside world what was happening to them, even as the Indian army was on the ground. Seven million people remained disconnected from the outside world, with the shutdown of internet and phones. The communications blackout made poet Rumuz numb -- she felt everything had been snatched away from Kashmiris. Rumuz is in fact a pen name -- it means "secret" in Turkish -- because she does not want to reveal her real identity for fear of reprisals.

She has written about redefining the relationship of people, particularly women, with God; challenging victimhood and despondency narratives about women; and conflict and resistance in Kashmir from a gendered perspective. Rumuz believes that expressing her feeling of resistance is more important now than ever as Kashmir becomes more volatile and Kashmiris feel like a new law is imposed on them every day.

She says she has written for different reasons at different stages. "I started writing as a reaction to certain things in life, perhaps to overcome certain degrees of powerlessness. At that time I didn't know whether I would pursue this newly found passion or not. As time passed, I started taking my writing seriously and found it an apt mode of expression for my emotions and intellectual turmoil." 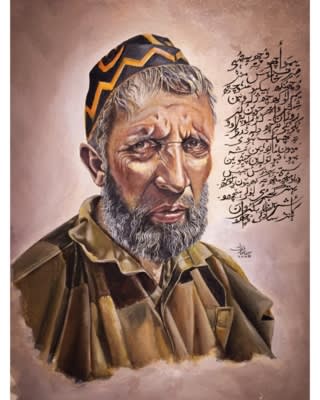 Portrait of a Kashmiri shepherd by Hina. (Safina Nabi)

To react to the political situation in Kashmir, she wrote poems in English and Kashmiri but she says writing in the Kashmiri language has given her a different comfort: "Emotions, feelings and love cannot be translated in another language with the same sentiment and warmth."

Her writings are a reflection of Kashmir and its people; this is a translation of one of her Kashmiri poems:

They issued an advisory

To stock up everything

As the clouds of war had

I memorized all your names;

Vowing to sight my moon.

Rumuz says that she sees a kind of poetic revolution in Kashmir as poets are coming up with newer themes, techniques and genres. "Times have changed, so have the manifestations of patriarchy and misogyny," she says. "I see modern Kashmiri women writers have stopped being the stereotypical parrots of personal victimhood. They talk about universal conflict, freedom, empowerment, self-reliance, power structures, societal normalization of discrimination and, of course, resistance, and this is much needed." 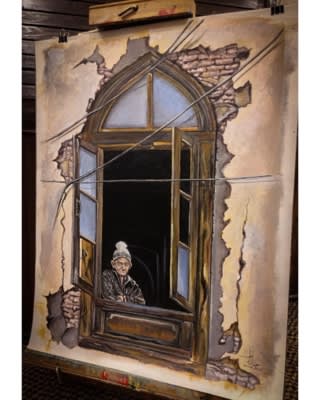 This work by Hina shows a Kashmiri man wearing a traditional pheran cloak while sitting on a daeb, a wooden balcony emblematic of Kashmiri houses. (Safina Nabi)

It is more than 11 months since India abrogated Article 370 and shut down the internet and phones. Postpaid mobile services started to work on Oct. 14, after 71 days, and low-speed internet after six months, but the restrictions on high-speed internet continue.

Syed Areej, 25, also wanted to protest when Article 370 was scrapped. She felt restless and constantly desired to revive the Kashmiri language, which she felt was in danger and now, with the laws devised to change Kashmir's demographics and thus culture, is at a critical juncture. She decided to write and perform ladishah, a deep-rooted Kashmiri genre of songs on social-political and cultural topics.

Areej says that she "always loved ladishah to listen to ... and finally I thought at any cost I have to try and perform it." The cost she refers to is the challenge one faces from society and family for trying to preserve and revive the genre. 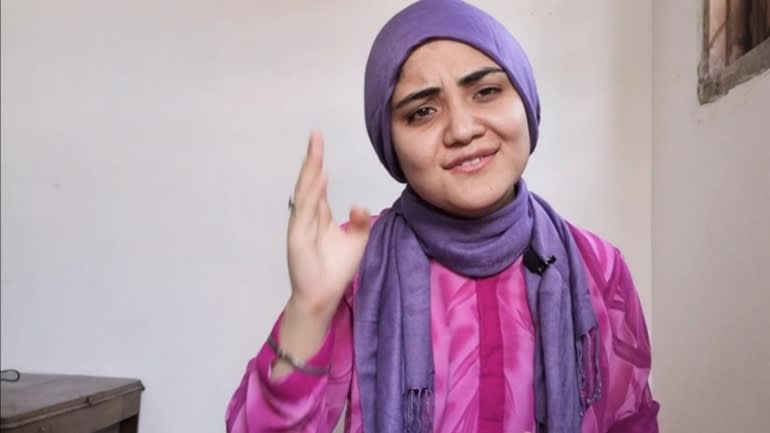 Artist Syed Areej in the traditional attire of a ladishah musical performer. (Courtesy of Syed Areej)

Ladishah was performed by only men and almost no one is doing it now, so it was dying a slow death until recently. Areej thought she could revive this tradition to vent her vulnerability and resistance as a Kashmiri woman.

With her "modern ladishah," she is trying to "grab the world by the lapels," she says, quoting the words of U.S. poet Maya Angelou.

Areej started to write, perform and upload videos on social media last December and now feels she is becoming better at it: "Ladishah is satire but this satire needs punch, timing and performance. One person is responsible for all three together and it was not simple." Initially she wrote and performed ladishah about draconian laws under which around 450 young Kashmiris had been arrested.

Being the first Kashmiri woman to try her hand at this art was not easy. "It was a big challenge -- people started to classify me with different names -- but at the same time I felt it's highly important to do it now because we cannot look at what's happening and let it go without reacting."

She is writing a ladishah as a protest against the domicile law. "I feel we are being betrayed repeatedly. ... I feel these betrayals need to be recorded in history. I choose ladishah because with ladishah I connect with the old generation and with the younger generation as well. This way I am documenting the history of Kashmir, reviving ladishah and also preserving Kashmiri language."

These women believe art is the only way to resist and express their anger now, when they cannot go outside to protest because of the pandemic -- but also that it is the most powerful way to resist any authoritarian regime.