Bhaskar Chitrakar sets down modern life in India in his artwork Traditional Kalighat painter Bhaskar Chitrakar produces all of his artwork on his bed in his childhood home in Kolkata. (Photo by Manob Ghosh)
ANURADHA SHARMA, Contributing writerJanuary 31, 2020 12:01 JST | India
CopyCopied

KOLKATA -- With Saraswati Puja, the festival marking the advent of spring, around the corner, Patuapara in Kolkata's Kalighat district was a flurry of activity.

Half-ready clay idols of Saraswati, the Hindu goddess of learning, basked in the winter sun, in rows lining the narrow, busy lanes. Once dry, the idols will be colored and adorned in colorful clothes to be worshipped on the day of the festival, this year in late January.

At the end of a lane -- so narrow that only one person can pass at a time -- in a tiny, dark room, Bhaskar Chitrakar sat by the light of the window, adding details to his painting of a babu (gentleman) clad in his dhoti, a long loincloth resembling baggy trousers, giving a ride to his bibi (wife) on a motor scooter.

Pointing to a painting of a crow perched on an electric line and relieving itself on the head of a well-dressed babu, he asks, "Is there anyone from Kolkata who's not been blessed by a crow dropping? Be it on the head or the shoulder, you've got to get it at least once.

"Kalighat painting is about this, seeking humor in our daily lives. ... It is meant to make you smile," he says. "Is there anyone from Kolkata who's not been blessed by a crow dropping?" asks Chitrakar. "Kalighat painting is about ... seeking humor in our daily lives." (Photo by Manob Ghosh)

In Bengali, Patuapara literally means a colony of patuas, artists who practice patachitra, or scroll-painting, an ancient folk-art form prevalent in the states of West Bengal and Odisha in eastern India. In the mid-19th century, members of the artisan community flocked from rural West Bengal to Calcutta -- as Kolkata was then known -- and settled in the vicinity of the Kali temple, on the banks of the Hooghly in the south of the city.

Fueled by pilgrims' demand for cheap souvenirs -- images of gods and goddesses hurriedly done with a few brushstrokes -- they gave birth to what came to be known as Kalighat Patachitra. Chitrakar, 41, is one of their descendants -- the only patua who paints in Kalighat's Patuapara today.

Chitrakar's square bed, whose sides hug three walls of his room, has been his world for as long as he can remember. This was the bed where he has always slept, where he studied as a child and where he now paints. Sitting cross-legged, hunched over a clipboard, every day he fills up sheets of Italian Fabriano paper with his commentary on Kolkata, its people and their quirks. His funny, affectionate takes on the people of his city have found fans in different parts of India and abroad, mainly the U.S. and U.K. The traditional and the modern often collide in Chitrakar's paintings. (Photo by Manob Ghosh)

"I paint mostly on order nowadays," says Chitrakar. "Orders keep coming from everywhere, mostly from nonresident Indians living abroad, and I get hardly any time to do anything else."

Initially, Chitrakar sculpted and made clay idols, like his father and other patuas of Patuapara. His busts of Lenin, which were much in demand when the state was ruled by the Communists, impressed not only his leftist father but local politicians too.

However, what he wanted to do was paint, something that his community had given up as a profession over half a century ago. 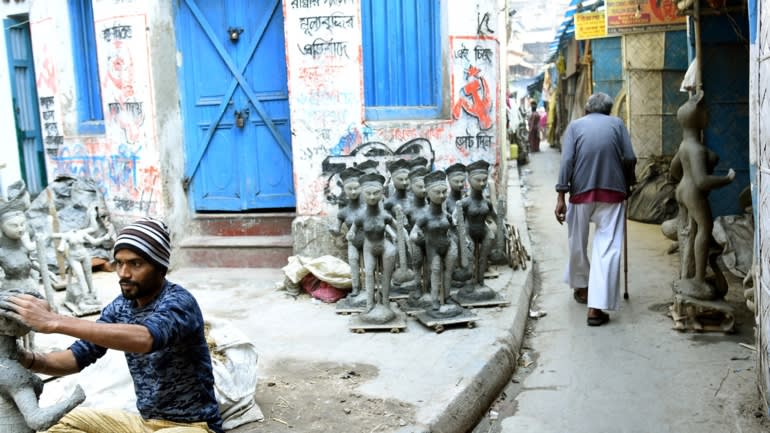 Before turning to painting, Chitrakar, top, started out sculpting and making clay idols, like other patuas of Kolkata's Patuapara neighborhood. (Photos by Manob Ghosh)

Chitrakar's father and grandfather painted as a hobby and it is from them that he got his first lessons, but mostly he is self-taught. "I followed the traditional Kalighat style at first," says Chitrakar. "But my father always encouraged me to find my own style and not just copy my ancestors. So, with time, and influenced by Mughal miniature painting, I have created my own unique style."

"His babu-bibi series was an instant hit," said Aban Desai, art curator and proprietor at Kolkata's Range Gallery, through whom Chitrakar mostly markets his art. "The moment I put up the painting of babu-bibi striking a pose for a selfie for sale online, it went viral. My phone choked with messages and I had to delete data." It was Desai who introduced Chitrakar to Mexican painter Frida Kahlo's works. "He was so totally fascinated by her that he began reading up on her everywhere," she says. What resulted was the Kali Kahlo series, Bengali versions of a Kahlo's self-portraits.

Chitrakar's Kahlo is the demon-slaying, 10-handed Durga, the goddess of power. She is Kali, the goddess of death, garlanded by severed human heads. She wears a red phonta (dot) over her unibrow, her hair is adorned by hibiscus -- sacred flowers usually offered to Goddess Kali -- and lotus; and sometimes, when Chitrakar's trademark cat is not perched atop her shoulders, has a snake slung around her neck. She smokes the hookah pipe and reads on her smartphone. Desai has exhibited Chitrakar's Kali Kahlo series as part of her shows to mark Kahlo's birthday.

"We started doing really quirky stuff as he gained in popularity," says Desai, whose input has informed Chitrakar's work in many ways.

The Kalighat school was a marked departure from traditional patachitra, which typically depicts religious and mythological stories on long pats (scrolls) made of stiffened cloth. In the traditional art form, still prevalent in other parts of the state, each scroll has a story and accompanying song; the patua narrates the story of the painting as she unfurls the scroll. The Kalighat school, which was aimed at catering to the mass market, did away with the song and the scroll. The artists, in addition to their religious themes, brought secular subjects on to their paper, sometimes as small as a postcard.

Characterized by bright colors and long bold brushstrokes on paper, Kalighat art is described by art historians as India's first school of painting that was truly modern and popular.

One characteristic feature of Kalighat art was its satirical depiction of the "babu culture," the decadent lives of the nouveau riche social elite that hobnobbed with British rulers. London's Victoria and Albert Museum holds the largest collection of Kalighat paintings -- 645 artworks created and collected over a period of a century.

Partly because of the easy availability of cheap lithographs, the tradition of Kalighat paintings died out in the 1930s. Patuas moved to idol-making and took up other professions. Patuapara shrank.

As Chitrakar established himself as a painter, he gave up idol-making altogether. Occasionally, he gives only the last touch: He paints the eyes on the clay goddesses, the most prestigious work for which he is sought after in Patuapara. Chitrakar has helped turn what was once seen as a folk art into gallery art, says Desai. (Photo by Manob Ghosh)

In Chitrakar's hands, the Kalighat style has undergone a transformation -- he has done away with the single, long sweeping brushstrokes. His images are far more detailed and his subject matter more varied. "Sometimes they tell me that his is not the purest Kalighat style," says Desai. "To them I say, 'This is his style.'"

She feels Chitrakar has helped Kalighat patachitra's transition into gallery art. "It is not folk anymore," she says.

But Chitrakar does not think much of his contribution. "I just do my work, I paint. I don't think beyond this."