Luang Prabang has no cinema, but annual event is attracting growing global attention 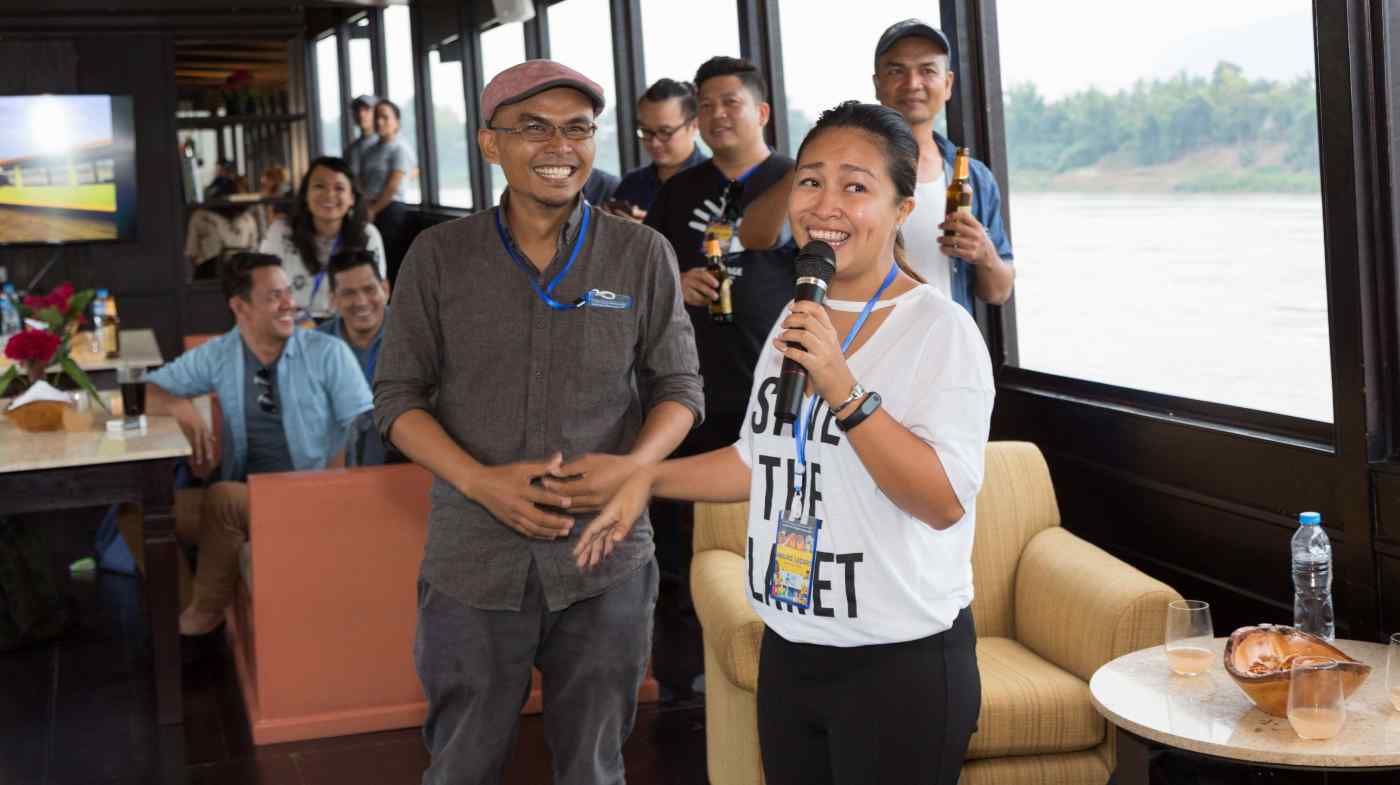 LUANG PRABANG, Laos -- Boating along a serene stretch of the Mekong River near the UNESCO World Heritage town of Luang Prabang, some passengers were overcome with emotion. "I screamed," said Xaisongkham Induangchanty. "We all screamed." Tears poured down Siege Ledesma's face. "I cried ugly," she confided. "Really ugly."

Their tears were an expression of joy, unrelated to the beauty of the surrounding scenery: Both were filmmakers attending the Luang Prabang Film Festival in mid-December, where they participated in a competition for young filmmakers seeking funding. On the boat trip, they were announced as winners. The Luang event may be the world's only major festival in a town without movie theaters. Open air viewing every night in the town’s main square attracted big crowds. (Courtesy of the Luang Prabang Film Festival)

Held annually since 2010 in this picturesque Mekong town, the festival shows productions from across Southeast Asia, even though Luang Prabang lacks a cinema. Movies are screened in a wooden hall at the Sofitel Luang Prabang hotel, and in the open air in the main square. In a town of 50,000 people, the twice-nightly screenings drew overflowing crowds.

The opportunities presented to filmmakers and film buffs was even bigger: a chance to see top features and documentaries from around Southeast Asia, to network, attend panels featuring regional and international cinema experts and nurture hopes for the big screen. For struggling filmmakers from poor countries, such as Induangchanty, who is from Laos, the festival can serve as an unrivaled field of dreams.

A jury chose Induangchanty's script for his film "Raising a Beast" as the winnter in the talent lab competition, awarding it a mentoring package provided by the non-profit Tribeca Film Institute in New York. The prize includes help to prepare this filmmaker to attend and pitch his project during the next Tribeca Film Festival in New York in April. Luang Prabang Film Festival founder and director Gabriel Kuperman hosts a boat trip on the Mekong where the winners of the Talent Lab were announced. (Photo by Ron Gluckman)

"For me, this is really huge," said the Vientiane-based filmmaker, who turned 39 just after the festival. He is part of Lao New Wave Cinema, a production company, but like many Laotian colleagues he mainly earns his living working for foreign film crews, or on commercials. Yet making films for the silver screen has always been his goal. "I've had this idea in my head for a long time," he said of his planned first feature, a family drama.

In coming months, Induangchanty will be helped to hone his proposal, then transported to New York for scores of meetings with film producers and investors who may be willing to finance the film, according to Bryce Norbitz, manager of artist programs at Tribeca Film Institute. "Our goal is to help these filmmakers succeed," Norbitz said.

Ledesma's prize was in some ways even more substantial -- a $10,000 award from Aurora Media Holdings, a Singapore media investment company. Her planned feature, "Cat Island," is set in Japan. She is free to use the funds as she chooses, but could work with Aurora to raise additional capital toward her budget of about $500,000. In any case, the prize focuses vital attention on her proposed second feature, which has also generated interest from Japan, where her 2013 debut film, "Shift," was a surprise hit.

The unlikely film festival in Luang Prabang, a former kingdom of the upper Mekong, began as the pipedream of Gabriel Kuperman, a young New Yorker who first visited the town on a backpacking trip in 2008. Charmed by the riverside temples, palaces and colonial estates dating from the French Indochina period, he returned to realize his vision of an international-quality film festival in an idyllic but challenging setting. 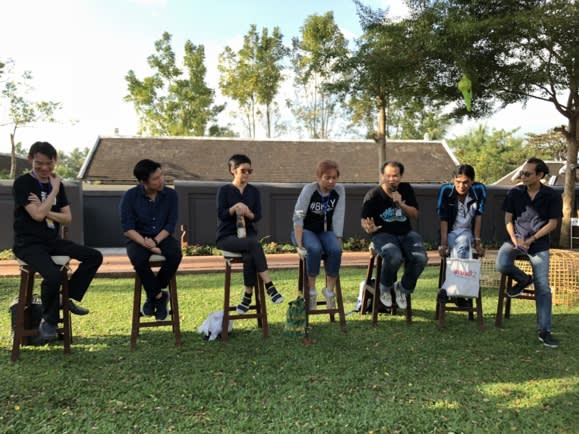 Thai filmmakers discuss issues hampering the Thai film industry, and across Southeast Asia, during one of several panels at the Luang Prabang Film Festival. (Photo by Ron Gluckman)

Besides the lack of a cinema, Luang Prabang also struggles with electricity and telecommunications. The festival must also deal with the reservations of a reticent government that remains among the most conservative of the communist regimes in Southeast Asia.

Yet the festival continues to shine, expanding every year, as Kuperman unveils new programs targeted at issues important to Asian filmmakers, with special attention always given to Laos. Among the programs of short films, one focused on budding talent in Laos.

Thailand was featured in the festival's annual "country spotlight" segment, with moviemakers showing their films and discussing challenges. Led by Kong Rithdee, an editor at the Bangkok Post newspaper and the writer of many films, the panel bemoaned the scarcity of funding and distribution opportunities. Thai cinemas favor Hollywood blockbusters over local productions, panel members said. They discussed quota systems to prioritize homegrown productions, a mechanism that has proved effective in nurturing South Korean moviemaking.

Censorship is a regional concern, including in Thailand, which has been ruled by a military government since a coup in 2014. Anocha Suwichakornpong, a Thai director, said that her film, "By The Time it Gets Dark," about a massacre of students in 1976, was shut down for a day by the army on the anniversary of the killings. "They never explained why," she said. Ironically, her film was Thailand's submission for nomination in the best foreign film category in the Oscars, awarded by the U.S. Academy of Motion Picture Arts and Sciences. Other films included the documentaries "Burma Storybook," which uses poetry to depict Myanmar's emergence from isolation after decades of military rule, and "Motherland," a whirlwind tour of the planet's busiest maternity hospital, in the Philippines. There were commercial features such as "Jailbreak," a Cambodian prison film, and the love story "Saving Sally," from the Philippines. Indian filmmaker Amit Dubrey previewed his forceful Cambodian psycho-thriller "Mind Cage." "Fanatic," a slick comedy about the Vietnamese rock scene of the 1990s, was like a mixture of "Back to the Future" and "Wayne's World."

Movies were screened back-to-back, with six showing per day, and viewers registering their approval afterwards. The Audience Choice Award went to "Redha," directed by Mona Riza, which was chosen for submission to the U.S. Academy Awards from Malaysia. She also participated in the panel, "Muslim Voices of Southeast Asia," which was especially topical in the light of international controversy over the plight of Myanmar's Muslim Rohingya population.

The directors of more than half of the 32 films screened were at the festival, providing a rare level of interaction. All the films and events were free of charge, and exhibitions filled the town, including photographs of historic cinemas in Myanmar, with Philip Jablon, an American based in Thailand, speaking about his long-term Southeast Asia Movie Theater Project. Jablon has journeyed to remote corners of the region to document old cinemas, many under threat, shuttered or since demolished, and will be publishing a book soon.

Kuperman praised the participation of Tribeca, another sign that Southeast Asian films are increasingly on the global map. "It's a natural partnership for us, and I really love how they have tapped into what we are doing," he said. He also lauded the increasing level of regional co-productions, which was a hot topic at the festival.

Induangchanty plans to direct "Raising a Beast" when funding is secured, but has also brought on board Abigail Lazaro from the Philippines, as producer. The pair met at another workshop earlier in Phnom Penh, Cambodia. Lazaro's co-producer is Lao-American Steve Arounsack, making this the first Laotian-Philippine-American production.

"You can see how fast things are growing in this region," said Norbitz, who first attended the festival in 2016 at Kuperman's urging. "He told me, just come and see for yourself," she said. "I just loved it. This is such a wonderful festival."