Laos goes to the movies

Local filmmakers are starting to overcome financing and censorship constraints VIENTIANE -- In most countries, the phrase "let's go to the movies" is commonplace. In tiny Laos, which has no tradition of cinema and lies in the cultural shadow of neighboring Thailand, it is a rallying cry.

Over the last few years, Lao audiences have seen their options for movies grow slowly and steadily, with up to three Lao-made feature films appearing each year. This is in many ways a silent revolution, perhaps unnoticed elsewhere, but life-changing for a one-party state that until less than a decade ago had virtually no independent local film industry.

For more than three decades after the revolution that swept the communist Lao People's Revolutionary Party to power in 1975, locally produced films were usually mere propaganda. Even now, the Lao People's Democratic Republic -- a country of 7.22 million people -- has just four movie theaters, including two run by Thailand's Major Cineplex chain.

"I don't consider that we have a film industry yet," said Anysay Keola, the 36-year-old director-writer of the critically acclaimed 2011 thriller "At the Horizon," which gave fresh energy to the idea of Lao cinema.

"What we managed to do is give them that surprise of 'wow, a Lao team, Lao film, and you do a story like this?' It was like that, after a quiet space (of no films in Laos) for some time," said Khamhou Phanludeth, a graphic designer who played the lead character in "At The Horizon." 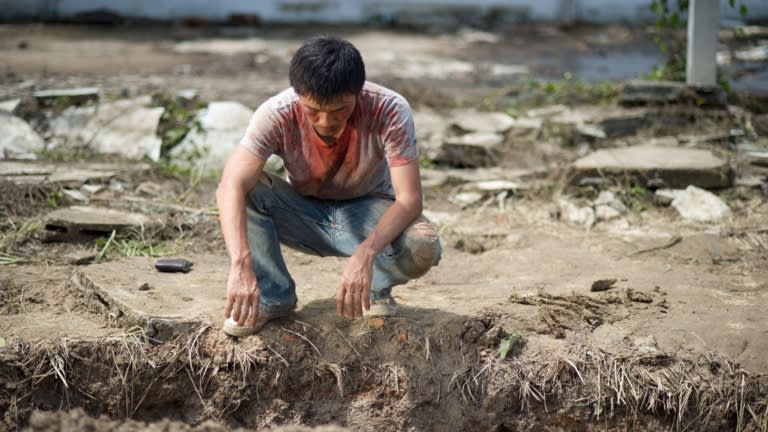 Khamhou, who won "best actor" in the 2012 Lao Entertainment Awards for his portrayal of Lat in "At the Horizon," is also a graphic designer and more recently, an innovation coach. (Courtesy of  Nin Kounthawatphinyo)

Several other new movies emerged at around that time, including the horror film "Chanthaly," the debut work of Lao-American director Mattie Do, which was released in 2012. Commercial films are still relatively unusual, but the seeds of further growth have been planted by groups such as Lao New Wave Cinema Productions, set up by Anysay and eight co-founders in 2012, which has produced four feature films for commercial release.

The latest is the romantic comedy "Expiration Date" (2019), which was shown at Major Cineplex cinemas in the country. The 2013 rom-com "Huk Aum Lum" ("A Love That Is Just Right") was popular among Lao audiences, and "Vientiane in Love" (2015) is an omnibus that combines stories from four Lao producers. The company has scripts for two films -- "Red Mekong" and "Raising A Beast" -- targeted for production later this year.

"The biggest change is that now we have more Lao movies, that are produced by Lao people and consumed by Lao people," said Vannaphone Sitthirath, an LNWCP producer and co-founder who studied film and TV production in Australia. "Before that, we didn't even have any image of what Lao film would look like, or what a Lao film would be," she said.

Before 2011, the closest thing to a Lao film was the popular "Sabaidee Luang Prabang" ("Good Morning Luang Pradang," 2008), which starred Thailand-based Ananda Everingham, who is of Lao-Australian descent, as a Thai photographer who falls in love with his Lao tour guide. The Thai-Lao co-production was widely described as the first commercial film to be shot on location in Laos since the 1975 revolution.

"Before 'Sabaidee Luang Prabang,' there was no cinema. We just watched Thai television and bought Thai DVDs," said Xaisongkham Induangchanthy, the Laos-born writer of "Raising A Beast," who studied in Singapore, Australia and the U.S. For now, moviemaking remains very much about the love of film, rather than a means of livelihood, in a country with a small population that has largely grown up without the movie-growing habit.

"'Let's go watch a movie' is replaced [in Laos] by 'let's go drink some beer,'" said Anysay, who studied in Australia and received a master's degree in film from Chulalongkorn University in Bangkok. "Basically, that's the phrase that my generation uses. Even now, many of us still do that." But, he added, "it's getting better with high school kids nowadays -- they have more choices than us."

The economic realities of making films force the LNWCP team to juggle film work with other jobs. The company has a mix of income streams, including producing TV commercials and documentaries funded by development agencies. Box-office receipts are shared with cast members. "We're experimenting with how to make this sustainable," Vannaphone said. "We try everything."

Lao businesspeople who wanted to try investing in films did so with "Huk Aum Lum" and "Vientiane in Love." Some of the financing for "Expiration Date," which features various Lao tourist spots, came from the Lao national tourism authority. But budgets for feature films are tiny -- between $30,000 and $40,000, according to Vannaphone.

For "Red Mekong" and "Raising A Beast" the LNWCP team is trying other ways to raise cash, and looking beyond Laos. In 2019, Xaisongkham pitched for co-production partners for "Raising A Beast" at La Fabrique Cinema -- Les Cinemas du Monde, run by France's Institut Francais and other organizations to promote filmmaking in developing countries, and took part in a laboratory as a director-producer at Switzerland's Locarno Film Festival. Anysay pitched "Red Mekong" in Locarno's Open Doors series, which focuses on the work of directors and producers from countries where independent filmmaking needs support.

Apart from financing, filmmaking in Laos continues to involve struggles with the government for script approval and permission to shoot. Anysay said he is tweaking the "Red Mekong" script, which failed to get the green light at first submission because of its setting in the criminal underworld at the Laos-Thailand border. The film's plot also involves drug smuggling and cross-border migration -- both sensitive aspects of Laos' ties with its richer neighbor.

"My idea is to propose that the film will not mention where it happens, like we don't say this is Thailand [or] this is Laos, this is anywhere on earth that people speak Lao and Thai," Anysay quipped. The government has not yet been asked for its view of "Raising a Beast," but the film's setting among the minority Hmong community is likely to prove sensitive because many Hmong sided with anti-communist forces in 1975. The film, inspired by Xaisongkham's own story, revolves around Ying, who does everything she can, including training the family's prized bull to join bullfights, to support her brother's dream to escape village life.

Both films would have to be shot abroad, most likely in Thailand, if they fail to get permission in Laos. "For now, our struggle is step by step," said Anysay. "In both our projects, we are not going to do something like criticize the government or (use the films) as a political movement. It's about individuals. It's about characters, about poverty, (about) struggling." The directors draw hope from the fact that "At the Horizon" got the go-ahead after an initial rejection.

Beyond the permissions hurdle looms the larger task of nurturing audiences in a society that has no film culture and is growing up in the smartphone age, with its emphasis on individual rather than shared activity. "It could happen that people won't need to go to the cinema anymore. So our challenge is to fit our format into that new way of thinking, audience behavior," said Khamhou.

Anysay, who thinks "the possible future is that the cinema industry is more like an exhibition or like a bonus," where viewers watch a film as an occasional treat, said LNWCP wants to set up an online channel to offer cinema on-demand. "If you talk to people randomly, (asking) 'do you go see a movie in the theater?' I think 0.1% will answer yes," he said.

The filmmakers are also pondering how to pass the baton to the next generation of writers and directors in the absence of a film school to encourage and develop fresh talent. Their plans include mentoring young filmmakers and developing long-term projects to keep the idea of Lao cinema alive.