Lisbon's Museum of the Orient highlights Portugal's history in Asia

From textiles to tai chi, gallery stands as testament to enduring connection

LISBON -- The building sits in splendid isolation: an immense 1940s warehouse, beautifully whitewashed and fronted with sculpted panels and a glass entrance, set on the Lisbon waterfront where ancient caravel sailing ships set out in search of the treasures of Asia.

This sprawling edifice of more than 10,000 sq. meters was once used to store dried slabs of bacalhau, or salted codfish. Now, the capitals across the top indicate a different sort of imported loot, spelling out Museu do Oriente (Museum of the Orient).

Converted at a cost of 330 million euros ($362 million at today's rate) a decade ago, this center for exhibiting and archiving everything from Asia is not only the most comprehensive Asia-focused museum in Europe -- it is also an unofficial monument to five centuries of history.

No Western country has a longer record of engagement with Asia than pint-size Portugal. In its brief moment as a nautical powerhouse, from the end of the 15th century, this nation -- which even now has just over 10 million people -- colonized territories in India, China and what are now Malaysia and Indonesia, as well as Africa.

The expansive kingdom lost its most illustrious navigator, Ferdinand Magellan, to indigenous fighters in the Philippines; left Christian enclaves in Thailand; and sent the first European "big noses" to Japan when its explorers built up the port of Nagasaki, bringing with them the country's first firearms and, it is claimed, the frying technique to create tempura. 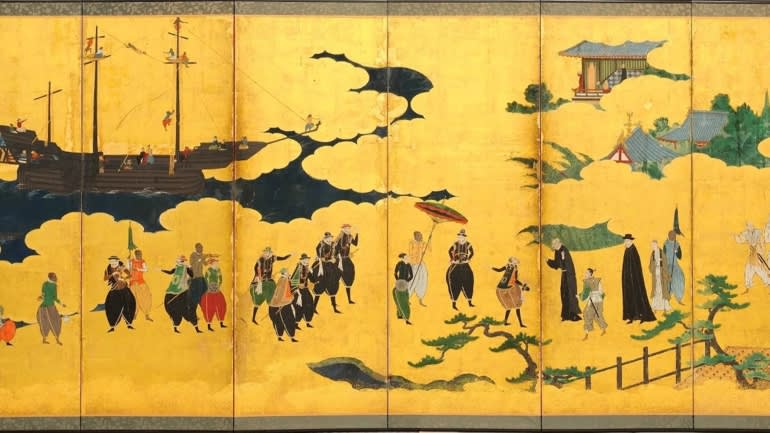 Top: The impressive Museu do Oriente was once a warehouse for dried fish. Bottom: A rare screen painting at the museum shows the arrival of Portuguese ships in Asia. (Courtesy of Fundacao Oriente/FG + SG fotografia de arquitectura)

From East Timor to Malacca to Goa, Portugal left its imprint in architecture, religion, diplomacy and cuisine -- this last mostly through adaptations of sweet pastries like the ubiquitous egg tarts. Nowhere is this influence more visible than in Macao, the entrepot on the South China coast that was administered by Portugal from 1557 to 1999 and became the progenitor of the Museu do Oriente.

The legacy of colonialism seems to run mostly one-way in Portugal. Visitors to Lisbon, once the capital of a far-flung empire, would be hard-pressed to find many visible symbols of its connection with Asia.

A few old palaces house clubs for returnees from Macao, yet restaurants serving their distinctive homestyle cuisine are scarce, just like those devoted to menus from Portuguese Goa. These are best known for their curry vindaloo, derived from the Portuguese for "wine and garlic." 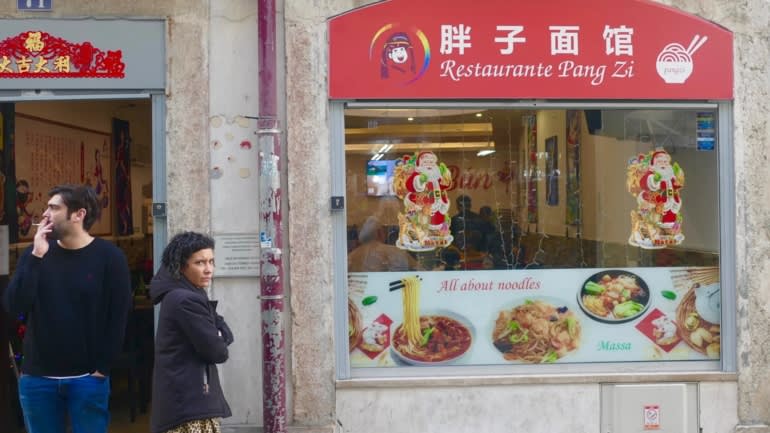 There are more hints of culinary fusion in the local Portuguese cuisine, with its greater use of cilantro, also known as coriander, and rice than anywhere else in Europe -- along with a marked taste for chamucas, the pastry turnovers that Indians call samosas.

Along with the rise of trendy "pan-Asian" eateries, many Chinese outlets are as inauthentic as their counterparts in Berlin or Dallas -- a good number even add sushi to their cheap buffets. One exception is the posh Cantonese restaurant at the country's biggest casino in the seaside resort of Estoril, west of Lisbon, run by the Macao gaming magnate Stanley Ho.

Recent Chinese investment, driven by Portugal's offer of "golden visas" -- requiring a minimum investment of 500,000 euros for the right of residency in the European Union -- has helped to spur a real estate boom. But the country's generally anemic economy has discouraged mass immigration from Asia.

The small Asian enclave centered around Lisbon's Martim Moniz Square is made up mostly of sprawling groceries supplying bitter melons or black bean sauce, its back alleys dotted with noodle shops and remittance services for sending funds back to South Asia. A Nepalese restaurant fronts a facade made with Portugal's characteristic azulejo tiles. (Photo by John Krich)

But the Museu do Oriente reflects a greater awareness of the cultural legacy of Portugal's empire.

Its exhibition halls often seem ghostly and underutilized, if pleasantly off the crowded tourist trail. But its rotating exhibitions of everything from Timorese textiles to contemporary photography of Asian street life reinforce the impact of its five floors of galleries, auditoriums, conference halls and shops.

Aside from an extensive permanent collection, the museum scored a diplomatic coup when obtaining from France the 12,000 artifacts of the Kwok On collection, named for its creator, a Hong Kong banker born around the turn of the 20th century who became an avid collector of Chinese puppets, instruments and opera paraphernalia. The collection, initially donated to the French Sinologist Jacques Pimpaneau for a museum in Paris, has greatly augmented the Museu do Oriente's existing collection of Chinese antiquities from along the Silk Road.

The museum is also the most active arts institution in Portugal when it comes to concerts, film series, lectures and classes related to everything Asian, from tai chi and medicine to languages. It is the leading center for all manner of Asian crafts and traditions, from calligraphy and ayurvedic medicine to feng shui and Japanese origami paper-folding. 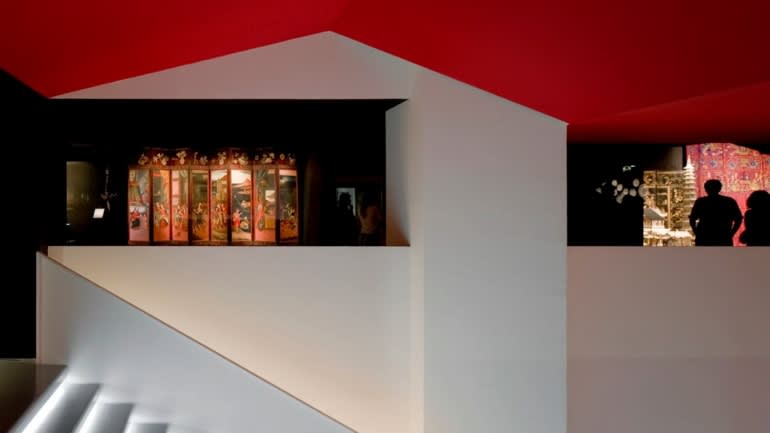 Of greatest value is the museum's 30,000-volume documentation center, which is a multilingual resource for scholarly research. Among other treasures it contains rare manuscripts dating back to 1553 relating to Portugal's exploration of India, as well as early travel literature about Asia and a special emphasis on the history of Western embassies in China.

Yet the institution's strongest ties to Asia lie in its unique form of funding. According to Carlos Monjardino, who heads the museum and its administrative Fundacao Oriente, Ho offered to create a charitable fund drawing on 1.6% of Macao casino takings during his final round of contract negotiations with the Portuguese authorities before the territory was returned to Chinese sovereignty in 1999.

This fund eventually became devoted to cultural activities, funding the creation of the museum as an indirect result of what Monjardino views as Ho's gratitude to his former Portuguese masters. Portugal also receives half the profits of Ho's Estoril casino. Carlos Monjardino, longtime head of the Fundacao Oriente and former administrator in Macao. (Courtesy of Museu do Oriente)

Monjardino recalls that Ho referred to him as a "brother" and that the magnate, now 98, seemed "genuinely moved" on his last visit to Portugal in 2008, when he got to see both the museum and a street named in his honor -- the first in Portugal for a Chinese citizen. Unsurprisingly, a bust of Ho stands before the museum's main auditorium. Underscoring his Portuguese connections, Ho's extensive holdings in local vineyards have given rise to several exclusive wines labeled simply "Stanley."

Personal bonds such as these are one durable result of Portugal's colonial past. "The rule of the Portuguese in Asia was different" from that of other European powers, says Joao Costa, professor of history at Lisbon's Nova University -- less about "large-scale colonialism" than "successfully using diplomacy" to create "connections" born of "a common history."

No wonder the Museu do Oriente's vision statement argues that "the spirit of the bygone Portuguese, the navigators who invented the concept of the union of the world," has become "indispensable to guarantee a peaceful future in the 21st century."

That may be a bit over the top, but it is refreshing to find a Western nation where no one seems too concerned about perceived threats from a rising Asia. "I don't suppose they really need us for much anymore," shrugs Monjardino.