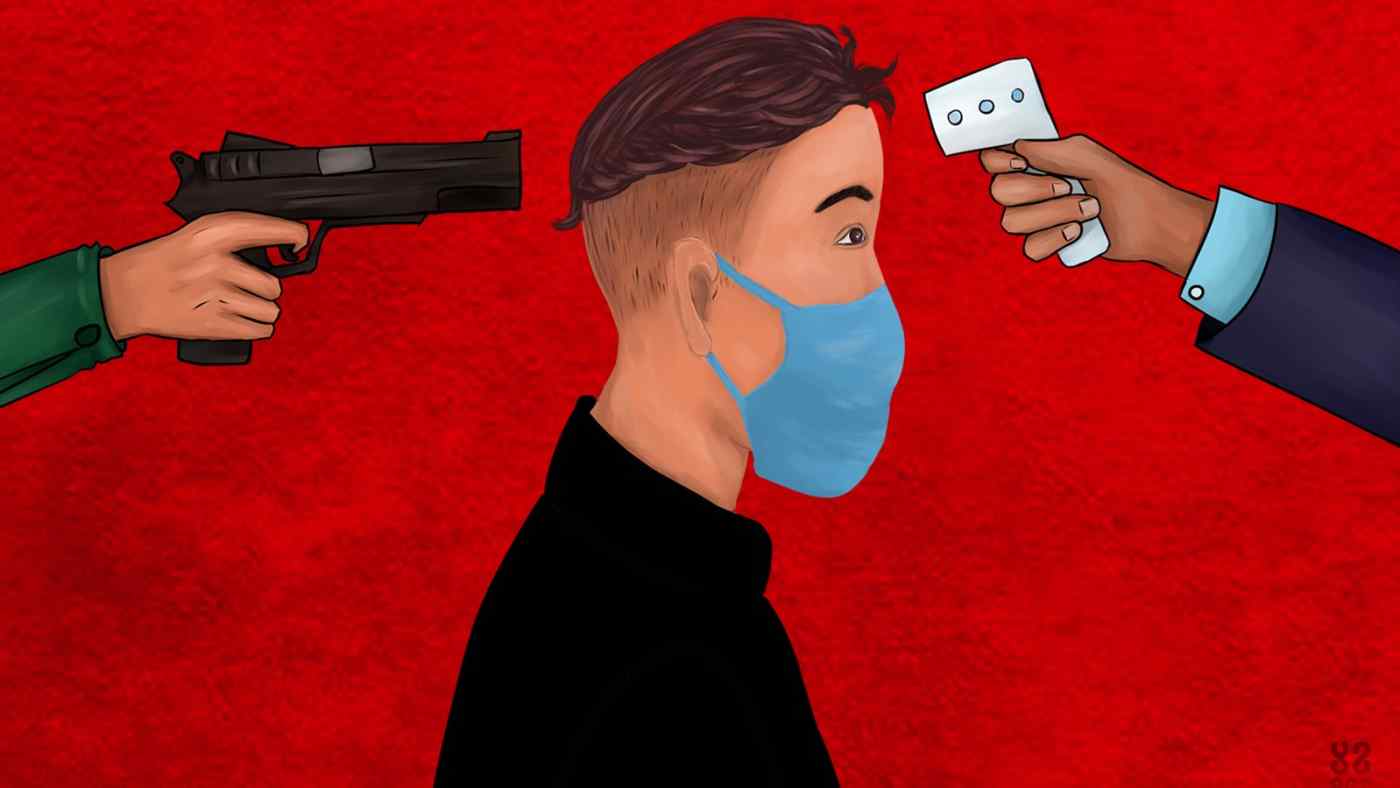 Detail of "2021 Burma" by Yarzar Myo. Since the Feb. 1 military takeover, Myanmar has seen an outpouring of artistic expression among both seasoned professionals and young artists who oppose the new regime. (Courtesy of the artist)
ROBERT BOCIAGA, Contributing writerOctober 6, 2021 08:00 JST | Myanmar
CopyCopied

SINGAPORE -- In the eight months since Myanmar's military arrested the country's elected leaders and seized power, the new regime's violent crackdown on dissidents has pushed young people to create political art that serves as a unifying voice for a nation mired in a deepening crisis.

"I knew so little about politics before the coup," said a young graphic artist, who uses the pseudonym Apzolute and studied in the English city of Bristol before returning to Yangon in 2019. "Yet now, freedom of speech, the right to demonstrate, to have security and the prospect of a proper job have all have been destroyed by the junta."

There has been a surge of resistance art in Myanmar since the Feb. 1 takeover, including revolutionary songs, street graffiti and even body tattoos. Amid the intensifying military crackdown, however, most artists are hiding their identities and displaying their work on the internet.

"It's important to raise my voice through art," Apzolute said. "Most of the time, I think that I would rather be in jail than having my voice silenced." His most recent digital artwork, "Angels in Disguise," pays tribute to medical worker volunteers and is circulating on Facebook.

Beyond the violence by security forces against protesters, many young artists are also criticizing the military regime's mismanagement of the country's third wave of COVID-19. Nearly 17,000 people have died with the virus in Myanmar since the pandemic began, according to the World Health Organization. This includes 130 artists, according to a count by Radio Free Asia. Activists blame the rising death toll on poor medical treatment caused in part by the centralization of the use of all medical equipment, from oxygen tanks to testing kits. Top: "Angels in Disguise" by Apzolute. (Courtesy of the artist) Bottom: A rare display of whimsy during a protest in the town of Nyaungshwe in the early days following the military takeover. (Photo by Robert Bociaga)

The regime's sweeping censorship has also curbed the activities of commercial artists as mainstream publications have been shut down. Many are now creating protest art for free. Saw Seltha, an aspiring cartoonist, said he wanted to pay tribute to fallen activists. "We need to stand by the people. I want to draw our revolutionary heroes who passed away so that everyone gets inspired," he said.

An ethnic Karen, Saw Seltha said he believes that cartoons should deliver "much-needed happy medicine that removes fear." His work pokes fun at government soldiers, while praising fighters of the so-called people's defense forces who are taking on the military regime.

"I feel sad, and even sometimes guilty," he admits. "While I sit and draw cartoons, someone is dying at the same time." 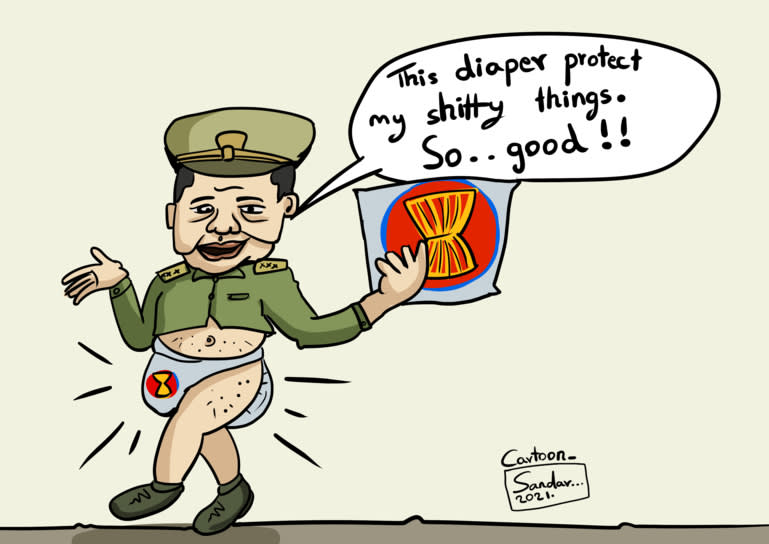 Works by cartoonist Saw Seltha: "Bones for the Dogs," top, and "Diaper." (Courtesy of the artist)

Several shocking incidents have galvanized the artists. In August, the military tried to arrest five young protesters, but rather than face arrest and possible torture, they jumped from the building where they were staying. At least two died while three were badly injured.

One artist, who goes by the name Harvey, created a poster in their memory, to "describe the pain because what had happened is so heartbreaking." The poster, called "Story of Heroes,'' honors and praises the victims, attributing each of them to one of the letters of the word "brave." The 23-year-old graphic designer said it was "the only way to fight for the time being, but when the war breaks out, I am planning to take up arms."

BlackDesign, another graphic artist, said "art is a weapon against the coup, and it can be the best way to show our revolution to the world." He said he is trying to sell posters to raise funds for striking workers. "Reject Military Coup" by BlackDesign. (Courtesy of the artist)

Some of the 6,300 political detainees held as of Sept. 8 in Myanmar's prisons are reportedly suffering torture and sexual violence. Under previous military regimes, some artists were able to create artwork while in detention. This time, political prisoners are not easily able to find ways to express themselves.

Htein Lin, who was jailed in the 1990s for his activism against a previous military-backed regime, was officially forbidden to paint. But he managed to produce several hundred paintings in secret, mostly using prison uniforms as his canvas. He said that "art stopped him from going crazy, allowing me to breathe when it felt like there was no air in the jail cell."

He is now one of Myanmar's best-known contemporary artists, and the common themes of his artwork -- suffering, confinement, struggle and hope -- bear testimony to the recurring problems that Myanmar has faced over many decades. 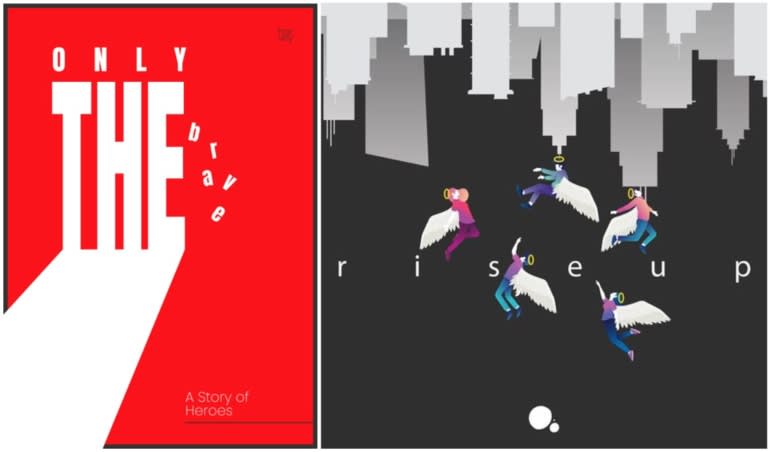 Top left: "A Story of Heroes" by Harvey. Right: "Rise Up" by Sai Moon. Bottom: "D-Day" by Nilar: Myanmar artists swiftly create new art addressing the latest events and developments in the fight against the military government. (Courtesy of the artists)

Many older artists like Htein Lin say the only way forward is to nourish and support younger artists. Some outside organizations are also helping in this way, including Connecting Myanmar, a Hong Kong-based charity that sells Myanmar art to raise funds for students hiding out in camps near the Thai-Myanmar border, many of whom want to study abroad.

Connecting Myanmar's catalog includes paintings by established artists such as Aung Myint, the founder of the Inya art gallery in Yangon, whose work has been shown at the Guggenheim Museum in New York, the National Gallery in Singapore and the Macau Performance Arts Museum. Much of Aung Myint's work includes political messages -- "Guns & Arrows," a recent work, portrays the guns of the military opposing the bows and arrows used by protesters in street clashes. 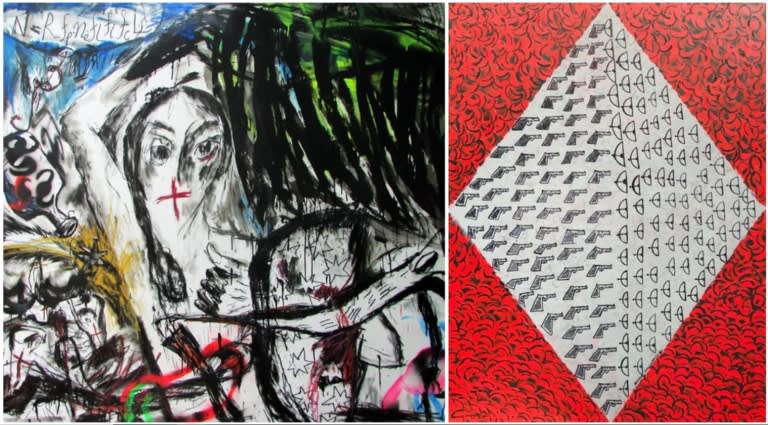 Another politically themed work is Kaung Su's series "Chaotic Poetry" in which Myanmar's national animal, the green peafowl, is portrayed in a chaotic and explosive manner. The vibrant and clashing colors and bold brush strokes convey the artist's frustration and anger about the turmoil engulfing the country.

This outpouring of artistic expression among both seasoned professionals and young artists has reached out across generations, spreading across the internet even as the security situation in Myanmar continues to deteriorate.

On Sept. 7, the National Unity Government, a grouping of opposition organizations, formally declared war on the military government, encouraging attacks on military targets by pro-democracy militias and ethnic armed groups. Answering the call in their own way, artists armed with paints, brushes and pencils are ratcheting up the fight against the regime.