Amid echoes of the past, renewed crackdown constrains free expression 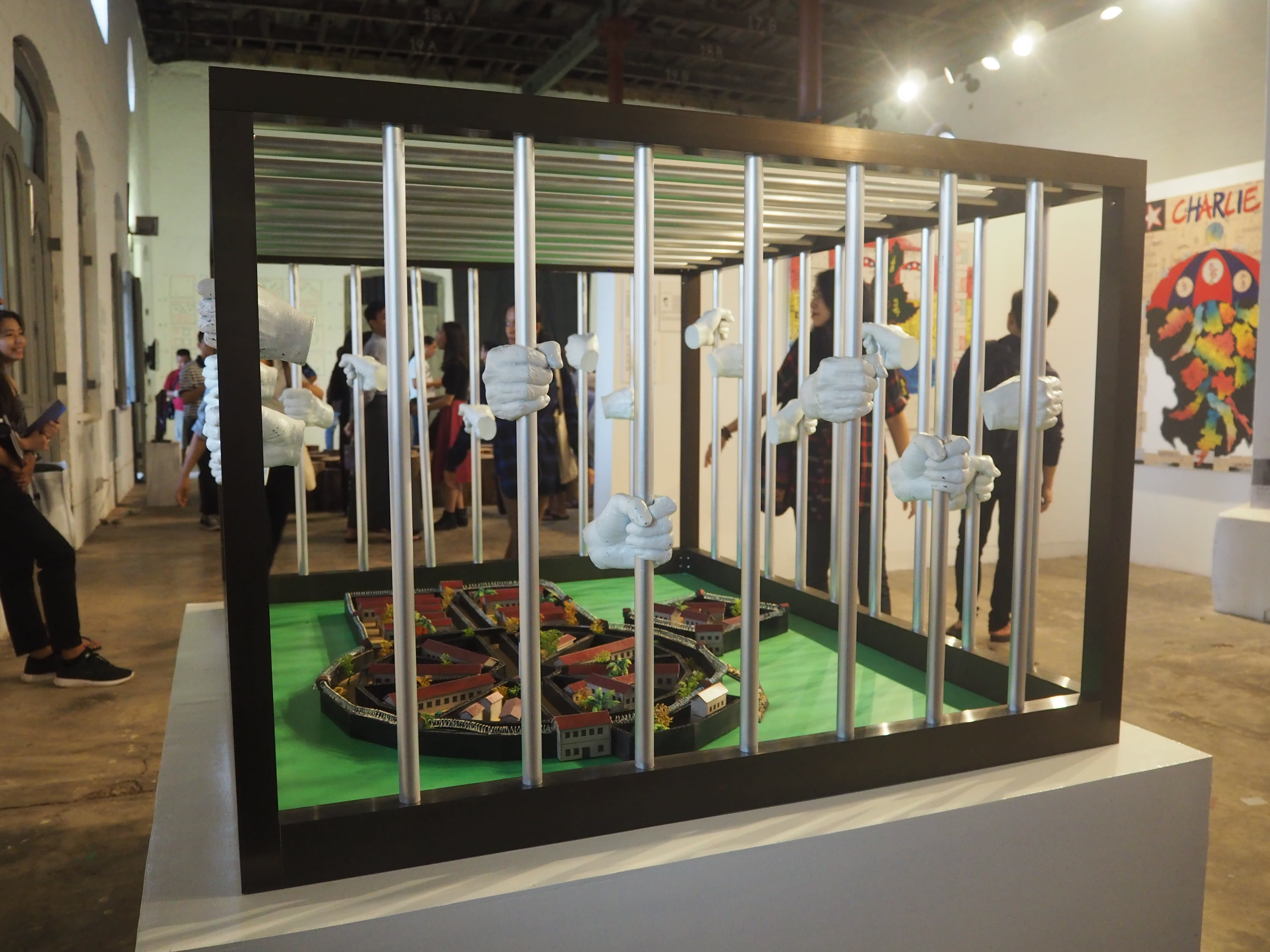 YANGON -- "People can expect a lot from art. Artists cannot make peace, but we can reflect on our history. This can help us understand each other," said Burmese painter and performance artist Htein Lin.

As monsoon rains battered Yangon, the 51-year-old artist was overseeing the final preparations for a new group exhibition called Seven Decades at the Secretariat, a sprawling, Victorian-era structure that was once the seat of the British colonial administration.

One of Myanmar's most internationally renowned artists, Htein Lin has come a long way since his childhood in the Ayeyarwady Delta in southwest Myanmar. As a student in Yangon, he joined the 1988 pro-democracy uprising, before fleeing to the northern mountains and joining a rebel group, the All Burma Students' Democratic Front. Escaping a brutal purge of suspected government informers, he returned to Yangon, where he was later arrested and jailed for almost seven years, emerging in 2004. After his release, he married the then-British ambassador, Vicky Bowman, and moved to London for seven years before returning to Myanmar in 2013.

He found his homeland greatly changed. Reforms launched by the quasi-civilian administration of President Thein Sein in 2011 had opened the world's doors to Southeast Asia's one pariah state. In a more open environment, activists, independent media and artists could express themselves, although their new freedoms rested on slim foundations.

Myanmar is now more than two years into its first freely elected government since 1960. With de facto civilian leader Aung San Suu Kyi promoting "national reconciliation," Htein Lin believed the time was ripe for a public reckoning with the country's bitter history of division. So, in collaboration with Pyinsa Rasa, a Yangon-based collective of artists, filmmakers, musicians and gallery directors, he commissioned 19 veteran Myanmar artists to produce works looking back on the seven decades since independence from British rule.

When the resulting exhibition opened at the Secretariat in early July, entry was free for the first weekend. A largely local crowd took in paintings, sculptures and video installations exploring episodes of Myanmar's modern history that those in power might rather leave buried. Htein Lin, artist and curator of the Seven Decades exhibition at the Pyinsa Rasa Art Space in Yangon’s Secretariat. (Photo by Ben Dunant)

"The Unfinished" by Aye Ko features a rectangle of knee-high logs, their ends inscribed with the names of students who demonstrated against military rule in 1962, 1974, 1988, 1996 and 2007. Aye Ko was imprisoned for leading protests in his hometown of Pathein during the 1988 uprising. He wants his work to be a memorial to those protests, but also -- as the title indicates -- an inspiration for future revolutionaries.

Another installation, "Loving Kindness" by Mandalay-born Chan Aye and Phyu Mon, commemorates the Buddhist monk-led uprising in 2007, known as the Saffron revolution. Its centerpiece is a pyramid of upturned lacquerware alms bowls, of the type used by monks in Myanmar to accept donations. During the protests, monks turned over their alms bowls in a gesture of defiance to the military government.

Aye Ko noted that before recent reforms, the artists' rousing symbols of protest would have earned them jail time. For decades before 2011, a succession of military regimes branded all pro-democracy protests the work of "destructive elements" in society.

The exhibition, which runs through July, concludes Pyinsa Rasa's six-month residency in the southern wing of the Secretariat, which has hosted various exhibitions, film screenings, concerts and seminars over that period. The 16-acre complex, completed at the turn of the 20th century by the British, fell into ruin under military rule. It is now being renovated by the Anawmar group, made up of two Myanmar companies, with tens of millions of dollars in private funding. The project is due to be completed in early 2020.

Around half the floor space will be reserved for cultural events and exhibits. Maung Maung Thein, a former deputy finance minister who chairs the Secretariat Conservation Group, said this would include a Martyrs' Museum honoring Suu Kyi's father, the independence hero Aung San, and eight of his colleagues who were gunned down in the building in July 1947, and a museum on the site of Myanmar's old parliament.

"We will enshrine our independence and the heroes who sacrificed their lives. We want our younger generation to know about this," said Maung Maung Thein.

These ideas fall comfortably within the mainstream narrative of Myanmar nationalism -- in contrast to the more controversial episodes explored in the Seven Decades exhibition.

One of the most striking exhibits is "In Isolation" by artist San Minn. It features a scale replica of Yangon's Insein Prison -- home over the years to several thousand political prisoners, including the artist himself. He was jailed for almost four years for joining the 1974 student protests against the government's failure to honor former United Nations secretary-general U Thant with a state funeral.

Most of Myanmar's political prisoners were released in mass amnesties under the Thein Sein administration. However, they have not received compensation or formal recognition of their suffering from the government, which still rejects any official definition of the term "political prisoner." Suu Kyi's national reconciliation project has promoted acceptance and progress rather than redress for historic wrongs.

Nonetheless, exhibitions such as Seven Decades and other public displays can offer political prisoners and fallen democracy activists an honored place in the public consciousness.

On the same weekend as Seven Decades opened, a photographic exhibition called "Beyond the Prison Gate" opened at the charity-run Healthcare Centre for Political Prisoners in the northern Yangon suburb of East Dagon. It features photographs by former political prisoners of other former inmates, as they try to rebuild their lives in the face of poverty, ill health and unresolved trauma.

One of those pictured, Ye Lwin, a rock musician and peace campaigner, died the week after the exhibition opened. The photographer Sai Minn Thein had also taken a series of intimate portraits of one family, several of whose members had been jailed by the junta, drawing attention to the struggle among those left behind. 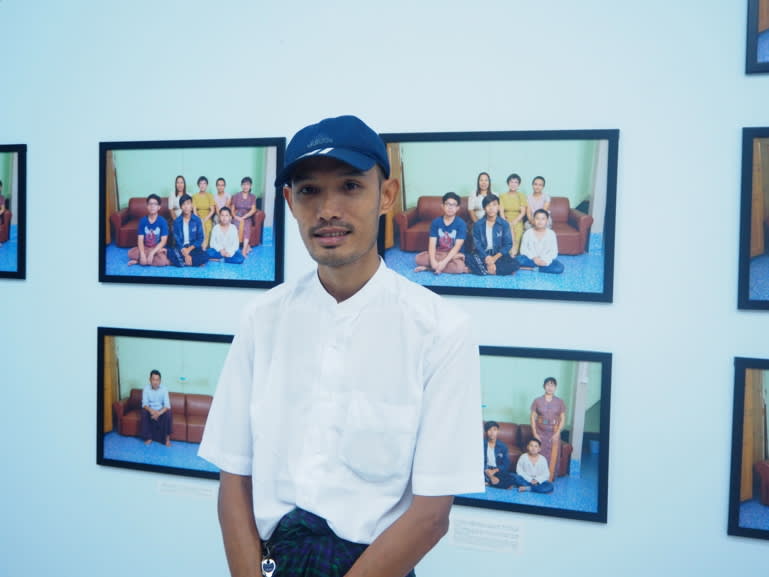 Sai Minn Thein, a former political prisoner, stands before his photo series of a family, part of an exhibition "Beyond the Prison Gate," at the Healthcare Centre for Political Prisoners in Yangon. (Photo by Ben Dunant)

Many of the works featured in Seven Decades would have been unthinkable under full military rule, but remain distressingly relevant amid a renewed crackdown on independent journalists and activists. The Assistance Association for Political Prisoners, a civil society group, said as of July there were 87 people imprisoned or detained for political crimes, with 158 facing charges while on bail.

On July 9, a Yangon district judge chose to proceed with trumped-up espionage charges against two Reuters journalists, Wa Lone and Kyaw Soe Oo, for their role in exposing a military massacre of Rohingya Muslims in Rakhine State. The reporters have been detained since December and face 14-year jail sentences.

While publicly examining past injustices is an important milestone, highlighting present abuses remains extremely risky. Artist Aye Ko said, "We still have limits on free expression, and cannot directly criticize the military's role in government. My work here is only about history."

Myanmar's artists have "much more space now than before," said Htein Lin, while emphasizing that there are still "red lines," particularly around the political role of the military and of religion, but also around the topic of sexuality, given the conservatism of Myanmar's ruling elite.

"Anyone who works in the art and creative scene here is guilty of self-censorship. We're all very careful about what we say, and tread lightly," said Pyinsa Rasa member Nathalie Johnston, who founded Myanm/art Gallery in downtown Yangon.

Noted Aye Ko: "Our country is not in a good situation. We still have the military in government. We need another revolution."