Steve Alpert worked there for 15 years and knew major players TOKYO -- Steve Alpert's book comes advertised as a business memoir, though you may find yourself grinning more often than annotating. For 15 years, starting in 1996, the American headed the international division at Studio Ghibli, Japan's most commercially and artistically successful anime company.

As their first non-Japanese hire, he negotiated with clients from Asia, Europe and the U.S., supervised the English-language translations of "Princess Mononoke" and "Spirited Away," voice-acted a character in Japanese for 2013's "The Wind Rises," and accepted awards on his employer's behalf at prestigious global film festivals.

He also clinched the indie studio's nascent distribution deal with Disney, a coup to bring the films of Hayao Miyazaki into living rooms worldwide on VHS and DVD -- and an Oscar to their visionary creator.

The title of Alpert's book, "Sharing a House with the Never-Ending Man," refers to six-time retiree Miyazaki who, at 79, is back making movies, and the book itself is a much wilder ride than most in its genre. Alpert combines a comedian's sense of timing and self-deprecation with a novelist's eye for killer scenes.

The book's four key characters -- producer Toshio Suzuki, the late media mogul Yasuyoshi Tokuma who funded Ghibli, genius Miyazaki and outsider Alpert, peering through the looking glass -- weave in and around the action like a crack ensemble, their eccentricities often thrown into hilarious relief by Japan's rigid corporate culture. 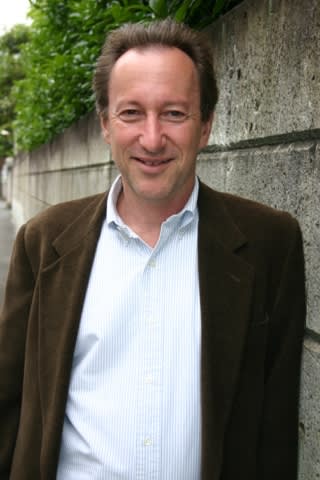 Alpert writes about his experiences as an executive at Studio Ghibli in his book, "Sharing a House with the Never-Ending Man." (Courtesy of Stone Bridge Press)

Alpert fears for his life during long commutes in gadget-geek Suzuki's kitted-out car; sequesters in the corner of a park to rehearse company speeches in formal Japanese ("like trying to eat or drink immediately after a trip to the dentist, you think you're doing it right, but you can't really tell"); slurps ice cream and pudding under the silent gaze of his charismatic overlord, Tokuma; and nearly loses Miyazaki's precious Golden Bear trophy for best film at the Berlin International Film Festival by leaving it at the wrong airport gate.

Recounting his bumbling misadventures, Alpert earns more than a few empathetic nods, especially from those who have lived and worked overseas. 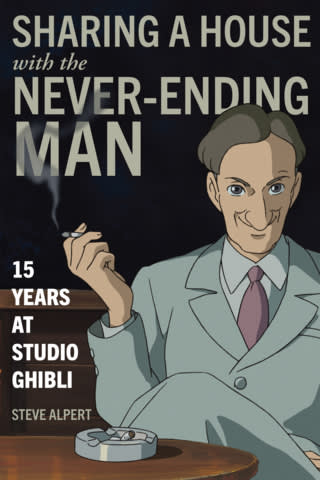 Alpert appears as a Ghibli character on the cover of his book. (Courtesy of Stone Bridge Press)

Descriptions of Japan's seemingly endless official welcome greetings, and lengthy compulsory meetings held after everyone has already agreed on their outcome, epitomize his host society's tendency to elevate form over content. Still, they are conveyed with genuine fascination and respect.

I first interviewed Alpert several years ago, when he gave me a tour of Ghibli's studio complex and helped arrange my conversations with Miyazaki. Recently, I spoke to him on a video call from his home near New Haven, Connecticut, in the U.S. "Sharing a House with the Never-Ending Man" may be the only behind-the-scenes book about Studio Ghibli we ever get -- at least until Miyazaki finally retires for good.

Roland Kelts: Miyazaki comes across exactly like the paradoxical personality I've met: outwardly grumpy about food and business travel, but ultimately cheerful and kindly. He micromanages his films in Japan yet doesn't seem to care much what happens to them when they're sold abroad.

Steve Alpert: Yeah, he usually doesn't even watch the dubbed versions of his films. But the one he did watch was "Howl's Moving Castle." And the reason he did [laughs] was because we had a screening at the Museum of Modern Art in New York, and the legendary actress Lauren Bacall, who voiced a role, was going to attend.

Miyazaki said, "The Lauren Bacall will be there? I'm going!" He sat next to her through the entire film. She flirted with him and held his hand. Afterward, he said he loved the dub. He was very happy.

RK: His artistic partner, the late director Isao Takahata ("Grave of the Fireflies," "Pom Poko"), hardly appears in your book. Why?

SA: Because he was an incredibly serious guy and there wasn't much to say except: If you had a meeting with Takahata, you had to block the entire day. He would explore every facet of every issue to infinity. He was brilliant, but if your meeting with him ended after two hours, that was a fast meeting.

My favorite story is when somebody at Disney Japan who knew that Takahata was between films scheduled a meeting to see if he would make a TV series for them. We had the meeting at Ghibli with some Disney executives, and after the first half-hour, the main guy, who spoke great Japanese, his eyes just started glazing over. After the first hour, he was looking at his watch. By the second hour, his body language was saying, "Please, God, let me out of this meeting."

After it finally ended, this guy made the mistake of asking Takahata one more question, and the meeting went on for another hour.

RK: So Takahata was a bore? 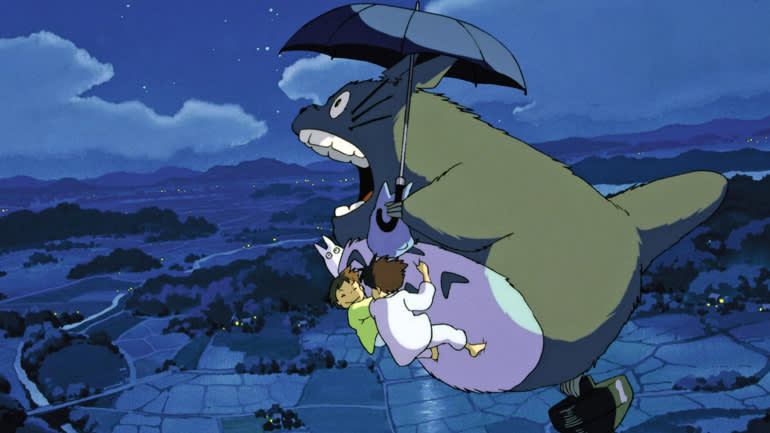 SA: No, he was just really thorough. There's a scene at the end of his film "My Neighbor the Yamadas" where the animation style is completely different. It's like "Gekko Kamen" ("Moonlight Mask"), kind of a superhero on a motorbike. All of the animators on the project thought that scene didn't belong so Takahata held a meeting, which I attended, and everybody told him why they didn't want it in the film.

They asked my opinion, too, and I was the only person in the room who said I thought it should stay. Takahata didn't look happy, but he listened to everyone's opinion very carefully and finally said, "OK, thank you all. I'm keeping it. I think it belongs."

RK: By contrast, Tokuma, the media tycoon who bankrolled Ghibli, looms over this story like a Dickensian caricature.

SA: Somebody should write a whole book on him. Really. I felt incredibly entertained and enlightened by seeing how he operated. He would live by these aphorisms. One thing he used to say was, "Never let anybody write the screenplay of your life." You write it yourself, and he definitely did that. He always thought about how he wanted to appear to others. He was like a performer of his own life. The cover of the Japanese-language version of Alpert's memoir. (Courtesy of Stone Bridge Press)

He could also be Machiavellian, a bit of a yakuza-type. He was into manipulating people and playing people who worked for him off each other. He kept [Ghibli producer] Suzuki very busy. I think he didn't really trust anybody. He would have me up to his office to sit in front of him and eat without saying a word. He just wanted to look me in the eye and see if I was cheating him. He felt if you could sit there calmly and eat ice cream without getting nervous, he could trust you. But he was really nice to me, like a grandfather.

RK: Did he appreciate Miyazaki's films?

SA: He definitely knew Miyazaki was a genius. He knew Miyazaki had spent seven years making the "Nausicaa" manga, and as a publisher, he really admired that. He let Miyazaki focus on his art.

RK: You write: "The rules of doing business are different in Asia." In what ways? 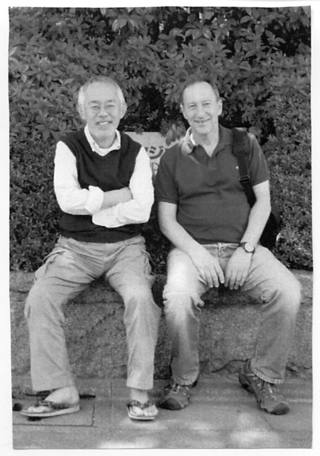 SA: Having done international business for centuries, Asian businesspeople tend to be more sophisticated. It's just a different point of view. Asians consider giving away too much information to be revealing your hand, whereas Americans, especially, tend to rely on massive contracts. If you have agreed to something in a written contract, you gave your word and you're going to be bound by it. For most Asians, what's more important is your understanding of the other party's interests, and what they'll do to achieve them.

RK: What was it like dealing with Disney, an archetypal American megacorporation?

SA: Well, the original Disney contract was something like 200 pages long and absolutely unintelligible. There were single sentences that ran three or four pages. Even the lawyers who wrote it couldn't understand certain sections. It was unbelievable.

RK: So you had to disentangle all that?

SA: It took us two years! In the process, I learned quite a lot about American entertainment contracts. There's a lot of legal terms, and if you're not careful, they get the rights to your work forever and never have to pay you again.

In Japan a contract is about a relationship. You don't just do a one-off deal. You have mutual goals that you pursue together. My experiences with Disney really made me want to look out for Ghibli.

RK: Did Disney U.S. not know how to promote the films, or did they just ignore them?

SA: Yes to both. Disney's international executives loved the films, but execs in the U.S. weren't so sure. There was also a genuine feeling among Disney's marketing people in the U.S. that foreign-made animation wouldn't do well with a mainstream American audience. So they did everything they could to disguise the fact that it was Japanese, even changing the artwork to try to make it look more Western.

But at least Ghibli kept the digital rights. Years ago, Disney thought DVDs would never sell so they let us have the rights at Tokuma's insistence -- even though he didn't really know what "digital" meant. We got lucky.

Roland Kelts is the author of "Japanamerica: How Japanese Pop Culture has Invaded the U.S." and a visiting lecturer at Waseda University.