Chinese media snub historic achievement over 2013 remarks on her homeland 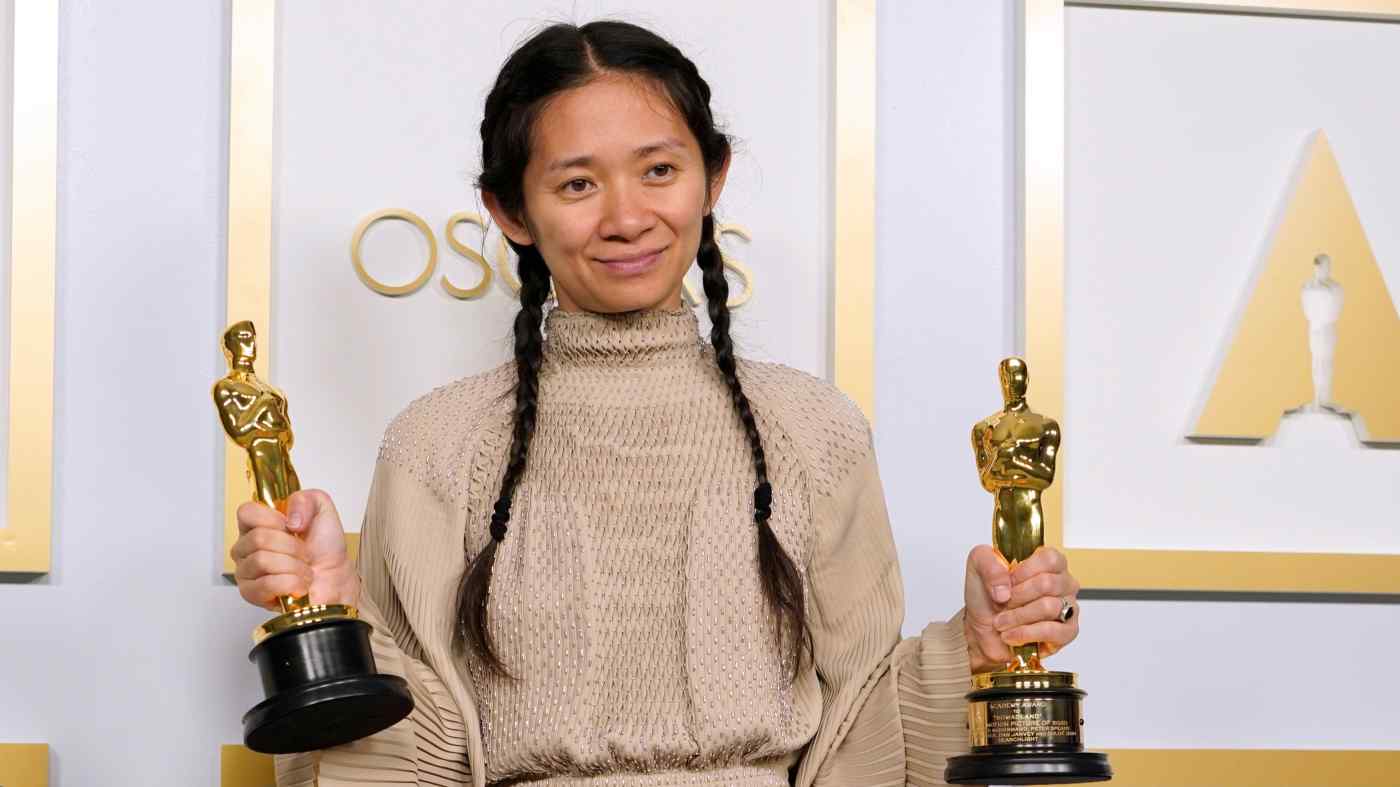 HONG KONG -- Chloe Zhao became the first Asian woman to win an Academy Award for best director on Sunday, crashing through one of Hollywood's toughest barriers with her film "Nomadland," which also won best picture.

Only two other Asian directors have won the best-director prize: Taiwan-born Ang Lee for "Brokeback Mountain" and "Life of Pi," and Bong Joon-ho of South Korea for "Parasite."

Accepting the award for her film about homeless Americans, Zhao recalled her childhood in China when she and her father memorized and recited classic Chinese poems and sayings.

"There's one that I remember so dearly," she said. "'People at birth are inherently good,' and those six [characters] had a great impact [on] me when I was a kid, and I still truly believe them today."

"Even though sometimes it might seem like the opposite is true, but I have always found goodness in the people I met anywhere I went in the world," Zhao said at the ceremony in Los Angeles, which was broadcast live in many parts of Asia on Monday morning.

Zhao also is one of only seven women to be nominated for best director and just the second to win, following Kathryn Bigelow for "The Hurt Locker."

The Beijing-born filmmaker this year also took home the best director prize at the Golden Globe, the BAFTA and the Directors Guild of America ceremonies.

Her breakthrough into one of Hollywood's most exclusive clubs is a clear sign that the Oscars have made progress in its publicly stated goal of expanding and diversifying its membership -- and its awards.

In another historical moment, Yuh-jung Youn became the first South Korean to win the best-supporting actress Oscar, picking up the award for "Minari." Youn is the second Asian to win in the category, following Japanese actress Miyoshi Umeki's triumph more than six decades ago with "Sayonara." Yuh-Jung Youn won best supporting actress. The Academy Awards broadcast attracted interest in South Korea and other Asian nations but was not carried in Hong Kong or mainland China.   © AP

Lee Isaac Chung, the U.S.-born director of "Minari," was also nominated for best director, while Steven Yeun was nominated for best actor in the film, which follows the story of an immigrant Korean family in rural America in the 1980s.

Among Asian-born filmmakers and actors with Asian heritage nominated this year, U.K.-born Pakistani actor Riz Ahmed was up for "Sound of Metal." English actor Anthony Hopkins, though, beat out Yuen and Ahmed for "The Father."

Zhao became a lightning rod in China in recent weeks for a resurfaced 2013 interview in which she was quoted as saying her homeland was "a place where there are lies everywhere." Chinese state media and netizens saw the eight-year-old comments as an affront to the country, which has become the world's largest box-office market.

The Global Times this month quoted Shi Chuan, vice chairman of the Shanghai Film Association, as saying that while "Nomadland" could be released in China, he did not expect it to draw much of an audience.

"That might [be] because Zhao is familiar with the Western value system, which is so different from Chinese society's, and added those values in her movie," he was quoted as saying.

"Nomadland" has yet to play in Chinese theaters, despite originally being scheduled for release on the mainland in April 23. Hashtags containing the movie's Chinese name cannot currently be searched on Weibo, a Chinese microblogging platform similar to Twitter.

China's official news outlets, like Xinhua News Agency, the People's Daily and CCTV, did not immediately report on Zhao's win.

Chinese Foreign Ministry spokesperson Wang Wenbin on Monday declined to comment on Zhao winning an Academy Award, saying it was not a matter related to foreign policy.

China has previously sometimes restricted broadcast of the Oscars or censored parts of the ceremony that it objected to, such as comments about its human rights record.

This year, the ceremony was not scheduled for broadcast in the mainland. Even Hong Kong's TVB, which had aired the Academy Awards for more than 50 years, did not air this year's ceremony, citing "commercial" reasons. Chloe Zhao is only the second woman to ever win the Academy Awards' best director prize.   © AP

Many movie fans in Hong Kong were able to watch the Oscars live by using special software to tap into overseas livestreams. In the mainland, Reuters reported from Shanghai that a viewing hosted by the Alumni Society of New York University, Zhao's alma mater, had access to their virtual private network blocked for two hours.

Officials in mainland China and Hong Kong in recent weeks also blasted "Do Not Split," a nominated short documentary about the 2019 Hong Kong protests, with the Global Times writing that "it lacks artistry and is full of biased political stances."

The Norwegian-produced 35-minute film did not win, but its nomination came amid a series of incidents in which showings of other protest-related documentaries were called off in Hong Kong after allegations that exhibiting such films might violate the national security law imposed in the city last year.

American director Anthony Giacchino, whose "Colette" beat out "Do Not Split," acknowledged the competing film as he picked up his award, saying "the protesters in Hong Kong are not forgotten."

"Nomadland," with a reported budget of $5 million, follows the lives of homeless Americans living in autos, SUVs and motor homes as they survive on temporary and seasonal jobs. Zhao also was nominated for best adapted screenplay for "Nomadland" but lost to Christopher Hampton and Florian Zeller for "The Father."

Zhao's next film is the $200 million blockbuster "Eternals," a Marvel Studios superhero movie starring Angelina Jolie and set for release later this year.