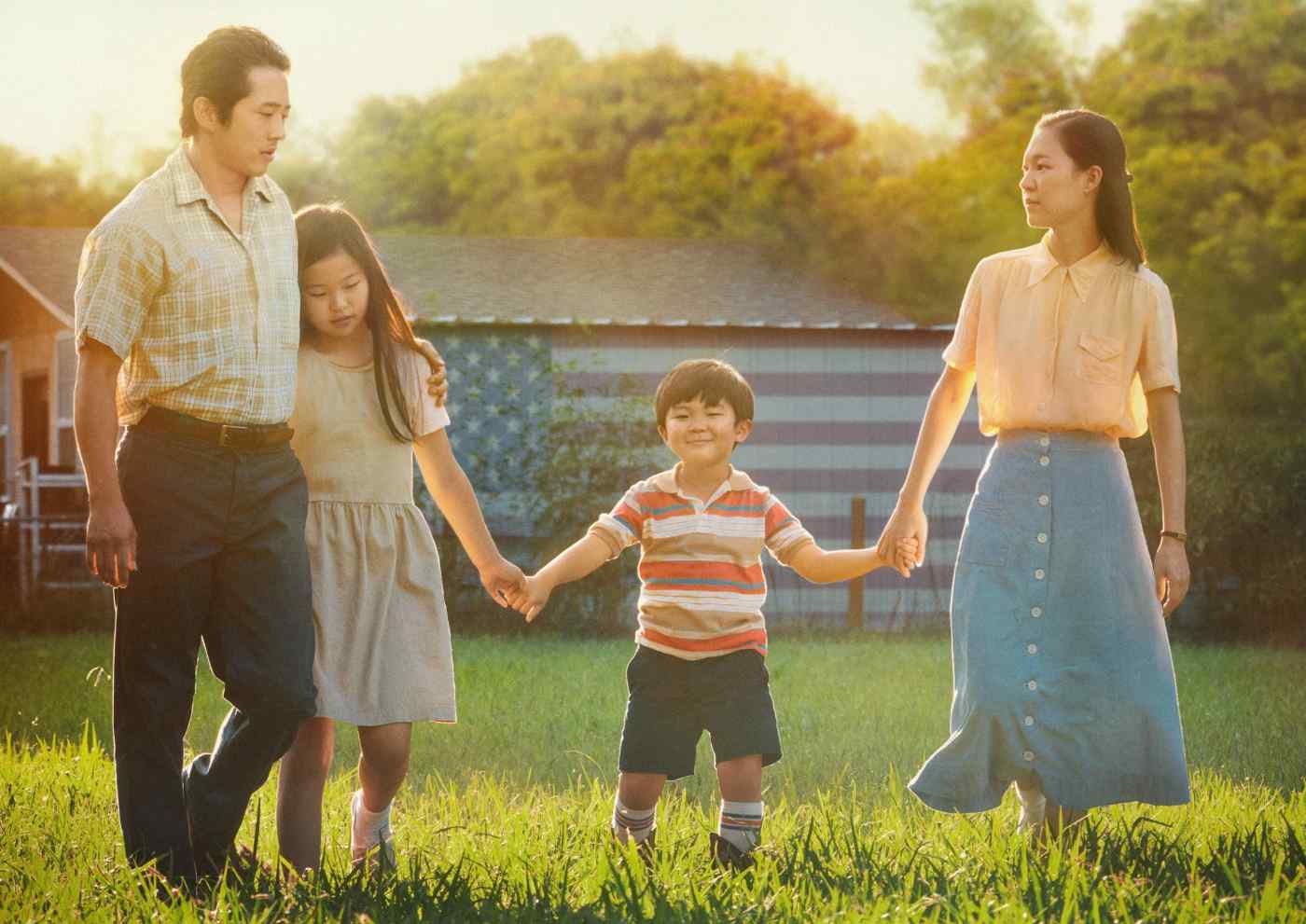 "Minari," directed by Korean American Lee Isaac Chung, follows the Yis, an immigrant family of four, as they move from Los Angeles to rural Arkansas to start a new life on a farm. (Courtesy of A24)
ROLAND KELTS, Contributing writerApril 25, 2021 08:00 JST | North America
CopyCopied

TOKYO -- A little over a year after Bong Joon-ho's biting satire of class conflict, "Parasite," became the first foreign-language movie to win Best Picture at the Academy Awards, another film with a Korean lead cast, plenty of translated subtitles and dogged money woes is up for the same top honor.

"Minari," directed by Korean American Lee Isaac Chung and based partly on his childhood, follows the Yis, an immigrant family of four, as they move from Los Angeles to rural Arkansas to start a new life on a farm. While Chung's script and direction are far more restrained than Ho's, the reception to his film has been anything but.

In mid-March, the Motion Picture Academy announced that "Minari" had been nominated for six Oscars, including its two plum prizes, best picture and director. The next day, six women of Asian descent, four of them Korean, were murdered in a mass shooting in Atlanta.

"That happened right after our nominations came out," Los Angeles-based Korean actress Esther Moon recalls during a video interview from her home. Moon, 44, plays Mrs. Oh, a middle-aged Korean immigrant and long-settled Arkansas resident who works at the factory where the Yi parents begrudgingly take day jobs. 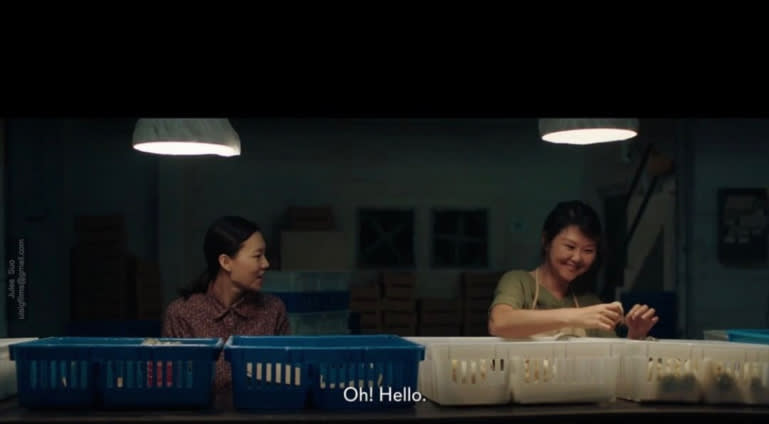 Top: Los Angeles-based Korean actress Esther Moon, right, in a scene from "Minari," in which she plays a Korean immigrant who works at a factory in Arkansas. Bottom: Moon relaxes with her son Deacon. (Courtesy of Piccolo Public Relations)

"It was this moment of an incredible high: 'Minari' got six Oscar nominations!" she says. "Asians were celebrating, and then 24 hours later there's this shooting targeting Asian women. It felt like we were on the rise and then, bang: you better know your place. It felt like a smack down."

Moon recognizes Mrs. Oh as a woman freed of the rigid class hierarchies and responsibilities of Korean society and wary of reviving them in her adopted American home, however alien it may still feel. "There are a few of us here," Oh tells the Yi family matriarch, Monica, when asked about other Korean residents in the area. "But most of us left the cities for a reason. To escape."

"She wants to get close enough to other Korean immigrants to get some authentic food and ingredients," Moon says, "but she doesn't want to be judged anymore. You know, we Koreans fight amongst ourselves a lot, and Mrs. Oh got away from all that. She's doesn't dream of a better life. She's at peace living in the American countryside among these naive, innocent white people." Moon's Mrs. Oh is one of several characters in the film that upend stereotypes of the Asian immigrant experience in the U.S. "Minari's" white Americans are largely marginal figures, seen through the family's eyes as slow-moving provincials with eccentric religious rituals -- a farmhand speaks in tongues and literally bears a cross on his shoulder every Sunday -- and blinkered racist assumptions.

Harvard professor Alexander Zahlten, who specializes in East Asian media, praises the film's "different models" of the diaspora experience in the U.S. Moon's character, he says, is a fresh reminder that immigrants migrate for complex reasons.

"Mrs. Oh is pivotal to me because she counters the idea that immigrant communities are defined by race, language, or ideas from a cultural background. In fact, it may be the community that some immigrants are actively fleeing," said Zahlten.

Moon's personal upbringing as a "parachute kid," moving between South Korea and the U.S. until the age of 16, when she settled in the latter, made her acutely sensitive to the dichotomies between Asian and Western cultures. 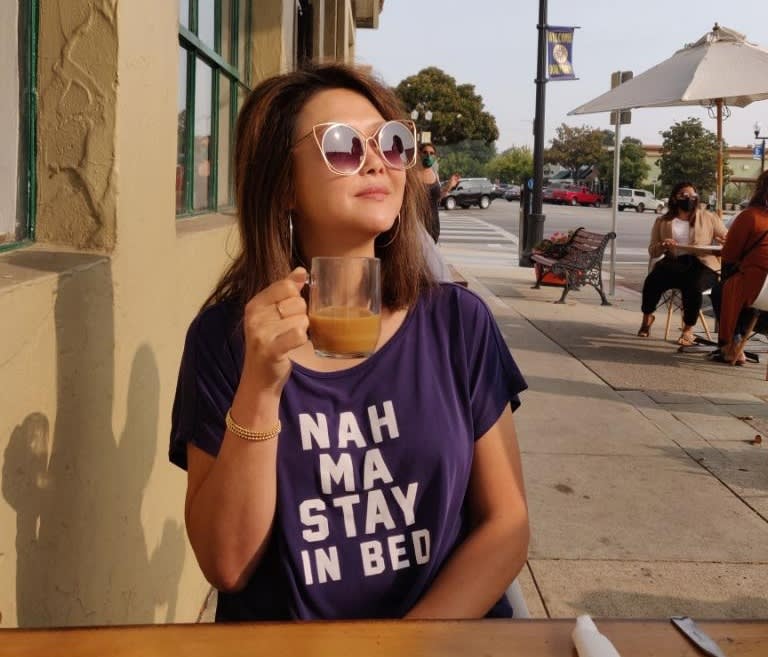 Moon in Paso Robles, California. She says her upbringing as a "parachute kid," moving between South Korea and the U.S. until the age of 16, made her acutely sensitive to the dichotomies between Asian and Western cultures. (Courtesy of Piccolo Public Relations)

"Minari" puts the spotlight on both. In the U.S., all four members of the Yi family are forced to reinvent themselves in the vast Arkansas landscape with fewer societal restrictions but also no safety net. Failure and poverty -- when money gets tight, their water stops running -- are always imminent, just one stroke of bad luck away.

"There was definitely less academic pressure once I came back to the U.S. to live at 16," Moon says. "In Korea, you have one shot at college, whereas in the U.S. you can have all kinds of fallback plans. But it's still really hard to get by here. Even college-educated Koreans will take manual labor jobs just to get their green cards."

The verdant southern landscape dominating nearly every shot of "Minari" marks a departure from recent Asian cinema reaching international audiences. While "Parasite" and "Shoplifters" -- Japanese director Hirokazu Koreeda's Palme d'Or-winning 2018 release -- both take hard looks at economic inequality through the lens of Asian family ties, they are set in densely crowded Asian metropolises. Their stories take place in intimate quarters at a comfortable remove from the daily lives of most Western viewers. Actor Steven Yeun embraces co-star Yeri Han in a scene from "Minari." The members of the Yi family are forced to reinvent themselves in the vast Arkansas landscape with fewer societal restrictions than their native South Korea but also no safety net. (Photo by Josh Ethan Johnson, Courtesy of A24)

"Minari's" wholly American pedigree -- director and screenwriter Chung was born in the U.S. -- sparked controversy at the Golden Globes, where it was confined to the foreign-language category despite being filmed and financed in the U.S., and having several lines of English-language dialogue. "This film is about a family," Chung said in his acceptance speech. "It goes deeper than any language."

Oscar-nominated Chinese American filmmaker Christine Choy, a professor at New York University, agrees. "It's an unusual story because we never see Asians in the U.S. as farmers," she says. "This is an Asian family stuck in the middle of nowhere who manage to keep their love and support for each other alive."

For Moon, among Chung's greatest achievements is showing racism without vilifying the characters who express it. She cites an otherwise placid scene at a church reception, where a white boy asks David, the Yis' youngest child, played by 8-year-old Korean actor Alan S. Kim, "Why is your face so flat?"

"Most people probably skipped over that line," Moon says, "but it just screamed at me. I grew up in America hearing that same question, but it wasn't uttered in a mean way, especially by other kids. They were just genuinely curious why, to them, my face looked so flat. It was the innocence of inexperience, not outright bigotry."

Roland Kelts is the author of "Japanamerica: How Japanese Pop Culture Has Invaded the U.S." and a visiting professor at Waseda University.