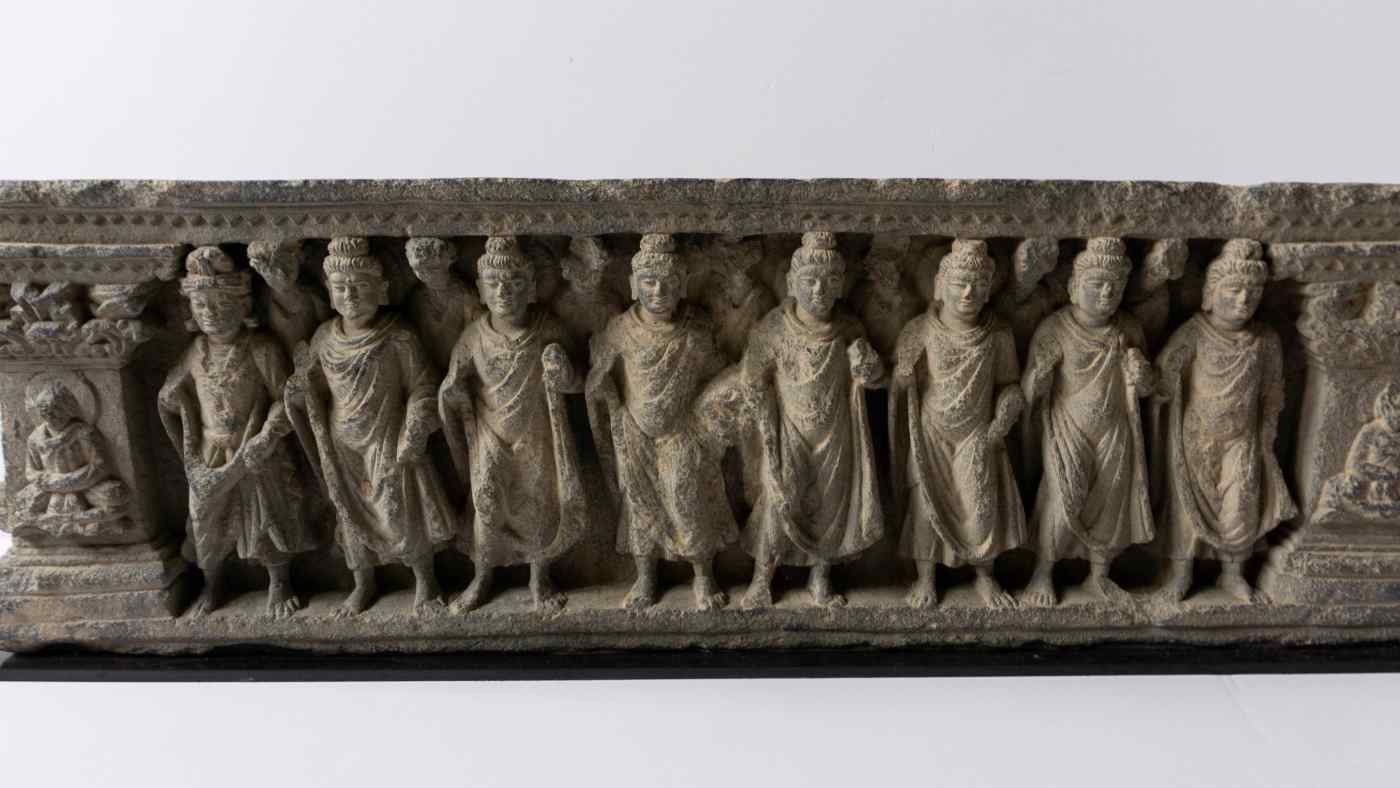 Gray schist Gandharan Frieze featuring seven figures of Buddha beside a Bodhisattva Maitreya. Measuring 20 centimeters tall by 63 centimeters wide, it has been dated to between the 2nd and 3rd century C.E. The frieze was one of 45 ancient artworks repatriated to Pakistan earlier this month. (Photo courtesy of Manhattan District Attorney's Office)
ALEXANDRA BREGMAN, Contributing writerNovember 21, 2020 09:30 JST | North America
CopyCopied

NEW YORK -- Two days after Manhattan District Attorney Cyrus Vance Jr announced on Nov. 2 that 45 ancient artworks worth $250,000 from the inventory of Upper East Side art dealer Nayef Homsi would be repatriated to Pakistan, the country's New York Consul General Ayesha Ali marked the occasion with a repatriation ceremony.

"We are very grateful to you," Ali told the U.S. agents who had worked on the case. "We are also very confident that you and your officers will continue to pursue the criminals involved in the theft and bring them to justice."

The works in question originated from the Gandharan region that covers modern-day northwest Pakistan and Afghanistan, an ancient crossroads of Greco-Roman, Afghan, Indian, and even Chinese trade routes, with a fruitful artistic heritage that reveals a distinctive Westernized yet Buddhist aesthetic. During the repatriation ceremony, Ali explained that Pakistan had recently embarked on a cultural tourism stimulus for the country and that these treasures would enhance that effort.

Although 45 pieces have been sent back, a further 100 antiquities from Homsi's inventory were seized in 2015 when authorities froze $500,000 worth of his assets, leaving the art dealer only $14,000 to cover legal expenses. Homsi himself declined to comment when contacted through his lawyer Adam Felsenstein.

Referring to Homsi as a "known trafficker" of objects from Afghanistan, Pakistan, and India, the current charges do not formally confirm Homsi's personal activity in the region. Instead, it was his background working with other dealers charged with criminality that led investigators to his history of knowingly perpetuating the sale of art with problematic origins.

Exporting Pakistani antiquities has been officially illegal since Pakistan enacted the 1975 Antiquities Act, making ongoing sales in the Western art market precarious. To those who strongly advocate against such transactions, the very existence of an antiquities market is itself deeply troubling. 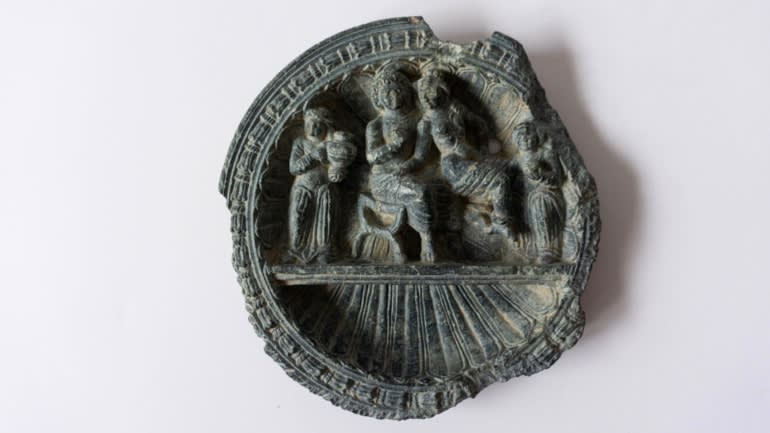 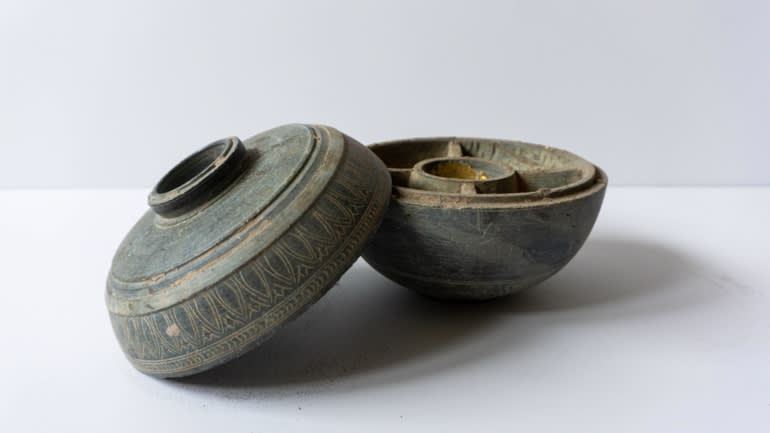 "I am yet to see an innocent good faith purchasing dealer," Indian author and advocate S. Vijay Kumar told Nikkei Asia. "My stance has always been: 'You closed the tap in 1970. How come you still get these objects out?'"

Author of The Idol Thief: The True Story of the Looting of India's Temples, published in 2018 following more than a decade of research, Kumar's passion is such that he now finds himself being called in by law enforcement officials to help identify Indian art in Europe and the U.S. "It was not something that came up all of the sudden," Kumar said of the Homsi case. "They raided because of our work."

The Idol Thief dives deep into the high-profile scandal involving Indian art dealer Subhash Kapoor. Through his business Art of the Past, Kapoor stripped, smuggled, and resold sacred Indian statues stolen from regional temples. At his Manhattan gallery located on Madison Avenue, Kapoor fostered relationships with America's top museums, including New York's Metropolitan Museum of Art and Ohio's Toledo Museum of Art. With Kapoor now serving a jail sentence in India, Homeland Security agents in the U.S. have since seized upward of 2,600 works worth over $100 million.

When Kapoor was in New York, he formed a close relationship with Doris Wiener. Homsi served as her director before he founded his own gallery. Wiener's daughter Nancy was arrested in December 2016 on charges of illegally obtaining stolen cultural property via international smuggling networks and later served a short jail sentence.

According to Kumar, Homsi probably maintained ties with the network initiated by his predecessors. "He's been under the radar. I think he didn't take the warnings and continued to peddle in this stuff," Kumar said of Homsi. "They let him go about his work for a couple of years to see if he was still in touch with the supply chain. I think that's why he got caught."

Kapoor was arrested in September 2011, the same year Homsi registered his independent dealership, Maitreya, to his Brooklyn home. But by June 2012, Homsi had already caught the attention of local authorities after he received a consignment of bejeweled 13th century gilt bronze deity Samvara believed to have been stolen from Kathmandu's Itum Bahal Temple temple in 1983. Homsi reportedly sold the piece to a Beijing buyer for $370,000.

In 2013, Homsi exhibited at the annual Asia Week New York held in March, presenting a wrathful 9th century incarnation of Shiva that was snapped up for $55,000 by London dealer John Eskenazi who said he did not realize the piece had been stolen from an Indian temple. When Eskenazi supposedly learned its true provenance two years later, he promptly filed suit against Homsi claiming $80,000 in damages. 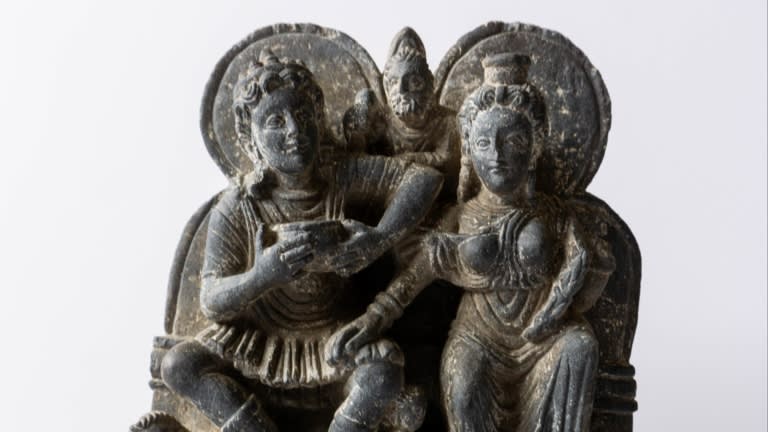 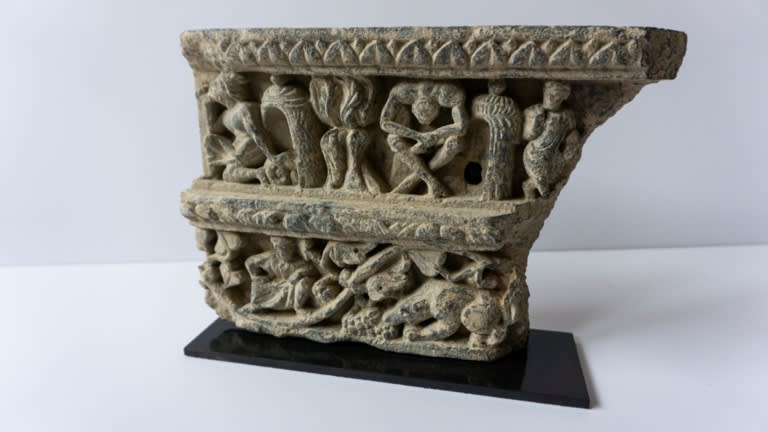 At the time, Homsi was said to have feigned ignorance, as others suggest he deliberately avoided due diligence by failing to use the Art Loss Register database to check whether the works he was offering for sale were marked by what he referred to in one email as "the black spot of theft."

According to Jason Felch, co-author of Chasing Aphrodite: the Hunt for Looted Antiquities at the World's Richest Museum it appeared that Kazu had directly purchased the Buddhapada (believed to have originated in the Swat Valley) in Pakistan in 1982.

Legal filings indicated that Subhash Kapoor's Art of the Past gallery was incorporated just four years later in 1986, apparently relying on "The Butt Network," a procurement corridor running between Afghanistan and Pakistan operated by Zahid Parvez Butt and Zeeshan Butt who supplied Kapoor and other dealers across Asia through a network of companies registered in Islamabad, Bangkok, Hong Kong and Dubai.

Despite multiple laws in Pakistan and Afghanistan banning the practice, Kapoor was thought to have worked around the laws with the help of a wide array of figures including Professor Marianne Yaldiz, then the Director of the Museum of Indian Art in Berlin. Legal notes suggest, negotiated purchasing rights with local Mujahedeen leaders, who were already excavating.

Porous borders burdened by military conflict, relaxed buying practices, and an overall disconnect between the worlds of law enforcement, dealers and museums present many challenges to enforcing many of the laws first enacted in the 1970s. Decades of political strife may also hinder the determined efforts of American authorities to send art back to Pakistan.

In the meantime, art will continue to trickle in and out of the illicit market, where law enforcement agents will be waiting for it.

At the Pakistani consulate in New York earlier this month, the repatriation ceremony opened with the American national anthem "The Star-Spangled Banner," as Pakistani and U.S. diplomats stood side-by-side, in rapt attention. This is their war for artwork. A war they plan to win.