MACAU -- Just a few blocks from the famed Lisboa Casino hotel, in an area swamped with neon-lit advertisements for gambling, money changing and massage, lies a quiet, modestly furnished, all-white cafe. A world away from the hordes of mainland Chinese gamblers, The Garden at Tak Chun is the unofficial center of Macau's surprisingly active art scene.

The shelves of The Garden's art library are filled to the ceiling with catalogues and announcements of upcoming events. Upstairs, in a small gallery space used for exhibitions, is the headquarters of Art for All (Macau AFA), a collective founded by a handful of painters in 2007 that has expanded to include 49 members.

"What was once considered as a 'cultural desert' has now entered into a highly dynamic phase," Alice Kok, a French-trained curator who is the group's president, wrote in a recent exhibition catalog. Kok's own work includes "The Burning World," a series of videos depicting various forms of money set on fire and turning to ash.

Described as questioning the "illusion of material values," "The Burning World" could also be seen as an expressive means of fighting back against 20 years of development that has turned the former Portuguese colony of Macau into the world's most lucrative and heavily patronized location for legal gambling. Yet even before that amazing transformation, this tiny sliver of 38 sq. km, now a self-governing region of China, had served for centuries as a cultural conduit between Asia and Europe -- a place where everything seemed to go against the odds.

"I'd call Macau a giant laboratory for human behavior," said Konstantin Bessmertny, a Siberian Russian artist, who settled in Macau 25 years ago when his wife arrived to work as a piano teacher. In the most incongruous surprise of all, Bessmertny has become the most widely collected representative of his adopted homeland on the world art stage. Some consider Bessmertny among the most original and talented artists in Asia, and he is certainly one of the most irreverent. With the dazzling technical skill of a modern-day Vermeer, or more aptly, Hieronymus Bosch, his canvasses mix grotesque dream imagery with hilarious caricatures of world leaders, neoclassical 18th century settings with samurai warriors, and Peking Opera princesses with triad bosses, prostitutes, gamblers and casino dealers inspired by Macau. Bessmertny has also expanded his East-West commentary to decorated lion statuary, vintage cars, mock movie-stills and miniaturized Mandarin doll houses. His St. Sebastian is martyred not with arrows but with acupuncture needles, while a variety of grim diners fight over dumplings in a painting wryly titled: "And you still don't know how to use chopsticks?"

The other Art for All members range from recent art graduates to long-established masters such as Carlos Marreiros, a mixed-race Macanese who is also one of the city's leading architects. His myriad canvasses, complex sketches and book illustrations draw heavily on historical references to the Portuguese colonial era, mixed with detailed evocations of a shared civic dreamscape.

The local Chinese artist Eric Fok has won recognition for exploring similar territory -- literally mapping out Macau's past and potential future with mock explorers' charts of invented landfalls. Chu Cheok Son has worked mainly through installations, including the dramatic statement "Never Let Go, Never Forget" spelled out in Chinese characters on placards displayed on one of Macau's lengthy harbor bridges. 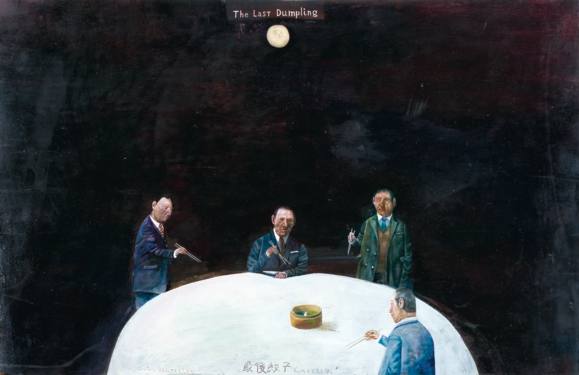 Other local artists, including ethnic Chinese, draw on Portuguese words and slogans. But the bulk of Macau's younger artists can be characterized as highly personal, introspective and abstract -- consciously rejecting the world of politics or group identity, though still reflecting a markedly Portuguese-influenced tendency toward nostalgia for a vanished past. This marks a sharp contrast with the bold pop art and biting sarcasm of mainland Chinese artists, aimed at the contradictions of China's rapid modernization.

While once a champion of Art for All, Bessmertny believes many of these emerging artists have turned into "addicts," dependent on support from the local government. "It's the old socialist model, supporting artists' clubs and organizations so they won't bite the hand that feeds," the painter said. Off the record, some local artists admitted to difficulty in producing sufficient decent work to fill the many sponsored exhibitions.

Macau's Museum of Art, opened just before the return of the region to Chinese rule in 1999, is probably the territory's best-kept secret. This five-story space has large permanent collections, mostly of traditional Chinese and historic Macanese art, and also hosts ambitious traveling exhibitions of work by leading world artists, including the Chinese avant-garde -- though it is criticized for not showcasing enough local artists (Bessmertny being one of the few exceptions). However, the museum is located in a sterile area of landfill surrounded by apartment blocks built for mainland Chinese investors, and is often empty except for groups of children being shown around on organized school trips.

The government also supports an annual Visual Arts Festival (now part of a broader arts festival) as part of a crowded roster of offerings aimed at tourists. The Macau Design Centre is a lively building that houses many creative talents, start-up businesses and photographers. The government-run Cultural Institute, part of the legacy of Macau's arts-oriented European past, regularly exhibits local works. And the walls of the historic San Lazaro district regularly display posters for exhibits around town at numerous other galleries, including Tap Seac, Dare to Dream and Blanc Art, which includes work by Bessmertny and other local heavyweights.

Even the lobbies of the vast Grand Lisboa hotel (home to the world's most extensive wine cellar) are studded with works from the extensive collections of Stanley Ho, a Hong Kong billionaire who once held a monopoly over casino rights in Macau, and his high-society daughter Pansy. At the recently opened, design-oriented Cotai MGM Grand casino, part-owned by Ho family interests, $100 million has been invested in commissioned works from distinguished Chinese artists.

This does not mean that every form of expression is welcomed -- or can find space -- in Macau's cramped, if constantly expanding, commercial zones. The Ox Warehouse, an avant-garde space on Taipa Island known for hosting somewhat scandalous performances and installations by invited foreign artists, was recently evicted by the government. A vibrant "graffiti zone" has also been bulldozed to make room for a car park. As for Bessmertny, he is now based in a split-level studio fronting the South China Sea, at the farthest end of Coloane Island, the least populated part of Macau. Having moved about as far as he can get from the Western art world -- though he recently launched a show in London -- he seems to feel free to lob his cannon shots of sarcasm and surrealism at any and all authorities, stereotypes, contradictions and demagogues.

In addition to plotting "guerrilla actions" at Hong Kong's prestigious Art Basel fair, he is now engaged in what he terms a "samizdat project" (after Russia's tradition of underground pamphleteering) by writing "manuals" for young artists, collectors and critics. "The naive young people who art schools keep churning out don't realize the world has no use for them," he said. He also termed designers and architects "enemies" for their emphasis on "art-tainment and decor," and claimed the art world is controlled by a "mafia of a few thousand collectors" -- many Chinese -- who he said are entirely ignorant but "feel guilty about getting rich."

While Bessmertny maintains a home in Portugal, he plans to remain in his obscure Chinese lair, championing the idea that "art is complexity" and following a creed, learned as an illustrator for a Russian dissident newspaper, of "saying funny things with a serious face."

Perhaps that is also a result of living in a place where the opulent wealth of the casino "high-rollers" seems to crowd out other meanings of existence. Still, if there is life in Macau beyond gaming and dining, its undiscovered art scene may be the place to look.