Sculptors carve out space for their art in Japan TOKYO -- The names of Kate Thomson and Hironori Katagiri may be unfamiliar to most Tokyoites. But their work, increasingly, is not. The husband-and-wife team are among a growing body of artists bringing sculpture to the streets and public spaces of Japan’s capital.

In a recent commission, they have each produced a piece for Park Court Akasaka Hinokicho The Tower, a residential skyscraper in the upmarket Akasaka district.

Katagiri’s imposing black pillar of basalt and granite stands like a protective deity in front of the soaring building, a single rectangular opening cut confidently through it, like a window or perhaps a face. Thomson’s contribution is altogether more delicate -- four curvaceous marble abstract pieces, representing Aphrodite and the three Graces, their abstract but unmistakably female forms set on cylinders of stone.

“Definitely his is masculine and mine is feminine,” says Thomson. “Kata’s work has a classical Japanese sensibility. Mine is more Western but there is an Eastern feel too.” From the office blocks of Otemachi and the Roppongi entertainment hub to the residential suburbs, public sculpture is changing Tokyo’s crowded urban landscape. Artists with global reputations are making contributions, notably Louise Bourgeois, with one of her giant spiders, and Robert Indiana, with his “Love” sculpture, the word spelled out in bold pop art capital letters.

Alongside them are many Japan-based sculptors, including Thomson and Katagiri. British-born Thomson, who is 57, met 60-year-old Katagiri when he took part in a sculpture workshop in Scotland some 30 years ago. They still spend part of the year in Edinburgh but their home is in rural Iwate Prefecture in northern Japan.

“Public sculptures are images on a human scale that bridge the architecture of a very large building and the human scale,” Thomson says.

For a Western city all this would be unremarkable. But in Japan it is a quiet transformation in art and in urban planning.

Sculpture outside the religious surroundings of shrines and temples is, in historic terms, new to Japan, dating back largely to the country’s 19th century opening to the outside world. Before that, Japanese cities were tight labyrinths of narrow streets, often deliberately designed by the ruling shoguns to confuse potential enemy invaders. There were few public spaces outside temple precincts, and almost none of the squares and gardens where nonreligious Western public sculpture evolved.

“We don’t have any tradition of sculpture outside Buddhist figures in temples,” Katagiri says. “Also, in Japanese homes there is no tradition of hanging pictures or putting art everywhere. Only [in the] the tokonoma (a single display shelf in the reception room).”

The explosion of Western influence after the Meiji Restoration brought with it Western art. But even then public sculpture developed only slowly, as if Japanese felt uncomfortable about erecting monuments to their rulers and heroes.

A splendid equestrian statue of Prince Komatsu Akihito, chief of the Imperial General Staff in the 1890s, in Tokyo’s Ueno Park, is a rare exception. A few bronze figures of the Emperor Meiji himself survive, but there is none in any prominent location in the capital. Queen Victoria, a contemporary whose stern-faced images still stand in many corners of the former British Empire, would not have been amused.

Indeed, Japan’s most famous statue is not of an imperial figure at all, but of a dog. Hachiko, so the story goes, waited nine years at Shibuya railway station, in Tokyo, after his master unexpectedly died and failed to return from work. First erected in 1934, the bronze Akita is both a symbol of loyalty and a popular meeting place. After Japan’s defeat in World War II, there was little time for public sculpture in the headlong rush to reconstruction. But a turning point came with the 1970 Osaka Expo, when artist Taro Okamoto erected the 70-meter-high fantasy “Tower of the Sun,” which is still Japan’s largest sculpture. A decade later -- as Japan joined the ranks of the richest nations, and as developers began to tear down the hastily erected postwar buildings in a turn toward quality and style -- public sculpture finally arrived.

But life is by no means easy for Japan’s sculptors. Katagiri says that the bubble economy of the late 1980s, when the country was flush with cheap money, produced a lot of demand -- and competition. “We had so many artists. But the quality wasn’t so good because people bought anything. Now we have less work but we have the chance to work more closely with architects and developers.”

Work for Katagiri and Thomson means long hours at their Iwate studio, which stands on a plot of land that resembles a builder’s yard, dominated by an ancient Sumitomo excavator that the sculptors use to move about blocks of marble, basalt and granite.

Both artists enjoy the first stage of carving when the shape is cut roughly out of the stone. “It is really satisfying to carve something out of the block because you make so much progress so quickly,” Thomson says. “Polishing then takes time. But it gives you time to think. To meditate.”

Their hard-earned experience makes Thomson and Katagiri the perfect guides for a short tour of Tokyo’s sculptures -- their own and other artists’ work.

We start with the city’s biggest concentration of public sculpture, in the business district of Otemachi, and a modern complex called Otemachi Financial City, where the developers have installed the works of six artists, including a series of flowing benchlike pieces by Thomson. Their curving lines contrast sharply with the straight verticals and horizontals of the surrounding skyscrapers. "These are Celtic patterns in three dimensions,” she says. “But I am not precious about my work. I want people to use them to sit on, and for children to play around them.” Of the other works on the site, she likes best a group of treelike stainless steel shapes called “Grove,” by British artist Richard Deacon, a Turner Prize winner. Thomson rubs her hands over the surface, admiring the grinding that gives the metal the texture of tree bark and creates patterns of soft dancing lights.

From Otemachi, we move to Katagiri’s basalt-and-granite guardian and Thomson’s Aphrodite in Akasaka. Although the works are new, Thomson can’t help thinking of their future. She says that for sculptors maintaining outdoor works “can be a challenge.” Contracts usually specify that works be cleaned but sometimes this is not done, even though “all you need is a damp cloth.” She adds with a laugh, “Artists sometimes get into trouble with security guards trying to clean works themselves.” 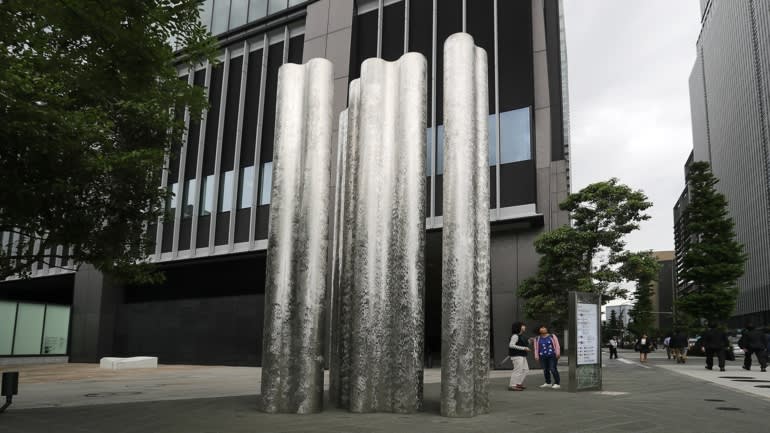 Next comes the Bourgeois spider at Roppongi Hills, a mixed-use complex that is worth a visit anyway for its accessible 52nd-floor observatory and Mori Art Museum, with frequently changing exhibitions.

The spider greets visitors at the entrance, looming above them like a runaway from a horror film. “It is unique,” says Thomson. “The scale has to be large to stand in Roppongi Hills. There is a lot of tension [about the piece]; it puts you on edge. A lot of people have a problem with spiders, so it’s a brave thing to do. But it offers shelter like a mother and it has the fierceness of a real mother.”

A little farther from central Tokyo, in the Gotanda district, is another site where Thomson and Katagiri have installed works -- on diagonally opposite corners of a residential block called Park Tower GranSky. As at Akasaka, Thomson’s piece is feminine -- two white marble shapes, recalling human forms that appear to be in conversation. Katagiri’s sculpture is a vertical rectangular granite column, rough on the outside but with a long polished vertical window within. He is reluctant to try to explain the piece too closely. “We like abstract because people can put their own stories into it,” he says. Next is an Okamoto piece in an upmarket shopping street in Aoyama. “The Children’s Tree” looks like an overgrown multiheaded plant with faces instead of flower heads. Today it seems rather forlorn because it stands before a former children’s play center that is primed for redevelopment. “I find him quite fun,” Katagiri says. “Playful and expressive.”

Our final port of call is Indiana’s iconic “Love,” placed outside the I-Land Tower in the Shinjuku commercial district. “Sometimes art can take itself too seriously,” Thomson says. “But this is simple and very popular.” Adds Katagiri, “Now, it is very well-known. But at the time [it was first produced] it was, ‘Wow.’”

“Love” pieces stand in scores of cities, a fitting symbol of art’s globalization. It is a sign of how much public sculpture has developed in Japan in the past 50 years that Indiana’s familiar creation today looks perfectly at home in Tokyo.