Seeking magic in China's 'other' Shangri-La SINGAPORE -- On the road in western Sichuan -- an area dominated by ethnic Tibetans but outside China's Tibet Autonomous Region -- Shivaji Das found signs for the "Ya Lu Underwear Monopoly" and the "Geopolitical Hairdresser Store," and stopped for refreshment at the inscrutably translated "Headbanger Coffee" shop. At an overpriced hotel in the tourist trap town of Riwa the desk clerk explained, "Only the gods are supposed to be able to afford room rents in heaven."

With a bemused eye and well-attuned ear for cross-cultural incongruities, Singapore-based Das -- a management consultant, photographer and founder of a migrant literary festival -- uses his just-published "The 'Other' Shangri-La: Journeys Through the Sino-Tibetan Frontier in Sichuan" to offer readers both a rare glimpse at a remote place and a rollicking example of old-fashioned armchair adventure. (The first area of China marketed as a "Shangri-La" is the mountainous region of Yunnan Province beyond Lijiang.)

Classic travel writing was an outgrowth of the Industrial Revolution's expansion of transport by train and boat to realms most could never imagine. Jet planes and today's digital revolution have pretty much killed this genre of unabashed discovery, turning most trip accounts into logbooks of inner struggle and growth. Yet in sticking close to the rhythms and revelations of each day's challenges, Das, who terms himself "a traveler first, writer second," seems to share each daring step up some of Asia's highest peaks.

Perhaps his sensitivity to remote places and marginalized people stems from his upbringing in Assam, a distant, tribal-influenced Indian state bordering Myanmar. "Where I grew up, there were Tibetan neighborhoods and markets in every town. They are among the greatest migrants and travelers in our world," he observes.

After undergraduate and postgraduate stints at technology and management institutes in Delhi and Kolkata, and a first assignment in the U.S. (in Columbus, Ohio) Das, 41, landed a management position with a U.S. company that helps businesses to adopt digital technology, eventually ending up in Singapore. Yet during his 14 years in the island state, Das has clearly been doing a lot of moonlighting. Das in the wild: He describes himself as “a traveler first, writer second.” (Courtesy of Shivaji Das/Konark Publishers)

In his travels in the Chinese province of Sichuan he was prodded along by his wife Yolanda Yu, a poet affectionately nicknamed "Lobo." Generally, though, Das eschews poetic descriptions, leaving that to lyrics he cites from Kham ballads and a popular love song from Kangding, the first stop on an ambitious, monthlong itinerary..

In a rat-tat-tat style that envelops the reader Das writes of bold hikes and late-night hotel searches, sweeping his audience over dangerous passes where rock faces are chiseled with Buddhist prayers and communist slogans. We meet macho drivers and stoic monks, experience nomadic life (and pulmonary distress) firsthand, traipse through markets strewn with severed yak heads and what is reputed to be "the world's highest slum" in Larung, and even observe a vertigo-inducing beauty pageant where the men are more renowned for their looks than the women. While Das is plainly in awe of the natural setting and its accompanying altitude sickness, he confesses that people hold his attention better. "The small generosities that I have always received from strangers help to soften my soul," he explains. "I cherish being able to collect the unheard stories of common people -- the cleaner, the bone collector, the cook in a ship."

His many encounters are vividly captured, even as he admits trying to stay clear of drawing conclusions about the ongoing domination of Tibetans by China's central government (though the author says he's most inspired by travel writers like Ryszard Kapuscinski or V.S. Naipaul, who freely dose their wanderings with caustic reportage). He does note that nearly every time he identified himself as Indian, locals responded with reverence for the home of the Dalai Lama.

Perhaps more telling than any fixed political viewpoint is the book's portrait of the inhabitants of this rugged region as fellow humans struggling with cost-of-living increases, codes of honor and temptations to cheat, their curiosity about outsiders combined with a natural fear of their impact. 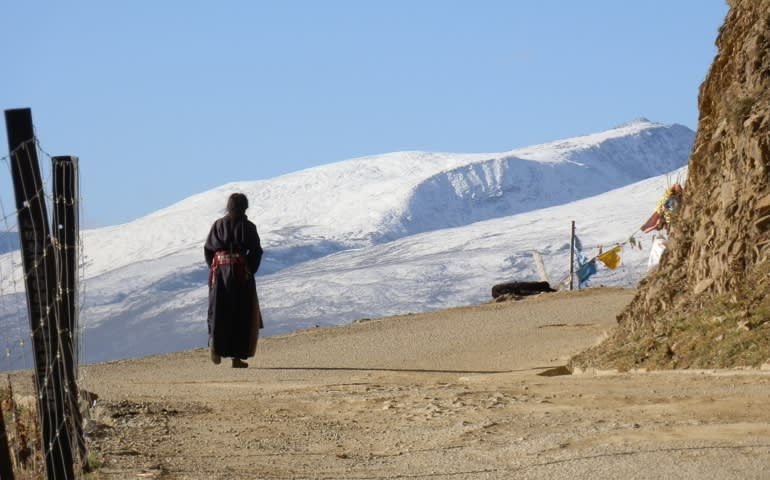 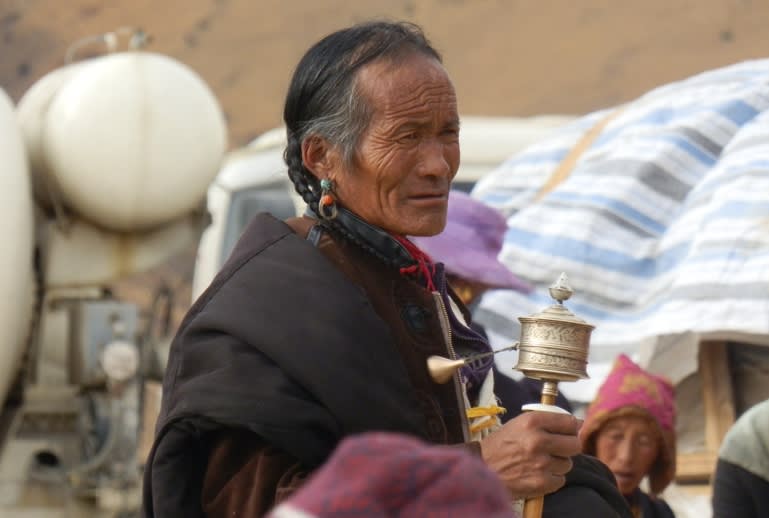 Top: On the way to the Litang Monastery. Center: A pilgrim in Larung. Bottom: Mount Yala rises above the Tagong Valley. (Courtesy of Shivaji Das/Konark Publishers)

Das possesses the two most important tools in the kit bag of the professional travel writer. First, he seems willing to follow his more impulsive wife (and translator) on a variety of detours with indestructible enthusiasm. Second, he knows when to be honest about the various fears and phobias he is attempting to overcome: China's communal toilets, stray dogs, the rigors of digesting Tibetan buns.

While he may be reticent about exposing his marital relationship or deeper motives for wanderlust, his narrative remains far above the glut of fellow countrymen who have crowded the internet with travel blogs since more Indians became able to afford the luxury of wandering. Even well-known Indian travel websites such as inditales.com and myyatradiary.com tend to be heavy on practical tips and standard attractions rather than genuine insights, often featuring photo essays such as "When My Sister Wore A Saree In Paris" or devilonwheels.com's "The 13 Highest Motorable Passes or Roads In The World." (Hint: Many are in Ladakh, an Indian territory in the Himalayas.)

Das, whose books, workshops and lectures have had a heroic impact in keeping literary genres alive, is also a co-founder of Singapore's Global Migrant Festival, which highlights poetry, plays and prose from a most unlikely source: migrant workers. The festival's second edition, scheduled for November, will be mostly virtual because of COVID-19 concerns. Das expects that change to make it more truly global, with foreign workers from as far away as Iran, Russia and Mexico sharing creative output with colleagues in the construction trade or domestic service around Asia. While the lineup is not entirely determined, the first edition two years ago drew some 200 performers and led to independently produced theatrical works in Singapore. Children at the Larung Monastery. (Courtesy of Shivaji Das/Konark Publishers)

Poetry competitions in Singapore and Malaysia have also attracted numerous contestants focusing on homesickness, abuse and family. One migrant worker from Indonesia, Deni Apriyani, says her bent for poetry began in junior high school, and participation in the festival led to a role in "In Between," a play by a Bangladeshi migrant. She sees the event as a chance to "tell our hidden stories and ... shine together through our differences."

Talking about his own work, Das says he wants to shine with "short stories on digital tech," and break what he calls "the heavy printed dominance" of Western travel writers. "In the long term, some types of travel writing, like destination roundups, may well get written by robots," he adds. "Travel writers will have to work hard to sieve out the real stories behind the perfectly filtered images on social media." Hopefully, that will mean more far-flung expeditions -- taking the rest of us in his backpack.