"Nishiki-e" pictures were popular during the Edo period, especially ones that depicted famous sumo wrestlers, such as Raiden and Tanikaze.
Arts

Sumo inspires artists to express the spirit of Japan

First-time visitors to the Ryogoku Kokugikan sumo stadium in Tokyo's Sumida Ward are invariably amazed by the pageantry surrounding the sumo ring -- the yokozuna grand champions parading in their ceremonial aprons, the gyoji referees in their costumes, the prize flags and so on.

The inside of the hall looks like a huge display of traditional arts and crafts.

The facility boasts famous ukiyo-e pictures themed on sumo, many of them colored woodblock prints known as nishiki-e. "Sumo began in ancient times and developed in the Edo period (1603-1867), when ukiyo-e also came into being," said Toyomi Kojima, 70, a well-known sumo nishiki-e collector. Kojima boasts a collection of about 2,000 colored woodblock prints. 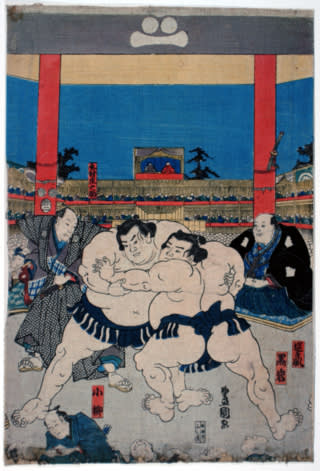 Sumo was one of the most popular entertainments in the city of Edo, now Tokyo, along with theater such as Kabuki. Famous ukiyo-e artists, such as Katsushika Hokusai and Utagawa Hiroshige, often featured sumo in their pictures. The prints depict sturdy, muscular wrestlers vividly and colorfully. The wrestlers include Raiden, regarded as the strongest sumo wrestler in history, who lost only 10 matches in his career, and Tanikaze, the fourth-ever yokozuna. The pictures crackle with the power of the wrestlers -- not surprisingly, since they were drawn by artists who were also renowned for their pictures of Kabuki actors and beautiful women.

"Nishiki-e were printed in those days just like bromides (celebrity photos) are today, and they were popular as souvenirs of Edo," Kojima said.

Sumo nishiki-e went out of fashion after photographs appeared in the middle of the Meiji era (1868-1912). But now a craftsman has revived the art. He is Daimon Kinoshita, 72, whose studio is a room in a condominium in Tokyo. More than 30 years ago, Kinoshita, who was working in an illustration-related job, began printmaking after learning the art for himself.

Kinoshita draws pictures and an engraver uses them to produce woodblocks, precision-cutting several lines in a 1mm-wide space. A printer then prints the pictures so accurately that there are no misalignments even after more than 10 pressings. "This is a world unrelated to advanced printing technology," Kinoshita said. "Since only a few craftsmen can cut or print now, we are doing this to hand down these techniques to posterity as well." Daimon Kinoshita is the only artist who draws "nishiki-e" colored woodblock prints on sumo using the traditional technique. He wants to preserve the traditional Japanese art.

What is the appeal of sumo? "In essence, it may be the 'beauty of style'," Kinoshita said. Sumo wrestlers still wear their hair in a topknot and sport the traditional mawashi loincloth. They squat in the prematch ritual, raise their legs and stamp the ground, and make a chopping motion with their hands when receiving prize money. "They could change the rituals into more modern styles, but they take the trouble to maintain them. Sumo is a world of beauty that has not changed since olden times," Kinoshita said.

Sumo stirs creative urges among other energetic artists nowadays. The Park Hotel Tokyo, in Tokyo's Minato Ward, has a guest room where Japanese-style paintings of sumo wrestlers are painted in India ink all over the walls. "We adopted sumo as the theme because we wanted to make the room a space where guests can feel the Japanese aesthetic sense," said hotel concierge Asuka Shiraki.

The paintings were made by Hiroyuki Kimura, 43, a Japanese-style painter, who has created works themed on sumo for about 15 years. He said, "Sumo is Japanese culture itself. It is a theme that I think is the most familiar to Japanese." One of the guest rooms at the Park Hotel Tokyo has pictures of sumo wrestlers painted on the walls in India ink. Hiroyuki Kimura, the painter, says India ink is perfect for representing the split-second movement of the wrestlers.

He paints pictures using a large calligraphy brush. He takes only about 20 minutes to paint a huge picture of a sumo wrestler nearly 2 meters high. "India ink is well suited to sumo paintings. The speediness of sumo and the split-second motions of wrestlers can be depicted with the momentum of the brush, with lightly rendered ink lines and so on," he explained.

Kimura has given performances of impromptu sumo painting in Sweden and Germany, and people there said in admiration that only a Japanese could paint them. "Foreign artists can also do it if they want to, but sumo is a world filled with Japanese spiritual culture -- it is said to 'begin with politeness and end with politeness.' Without full knowledge of this, one cannot express deep things," he affirmed.

Toshiyuki Shibakawa, 53, professor at Shujitsu Junior College, produces modern art using images from sumo. Shibakawa's theme is the world in 2,000 years. "What will become of sumo at that time? Since it has continued without a break since time immemorial, I think it may remain as it is 2,000 years from now. It is interesting to think about," he said. 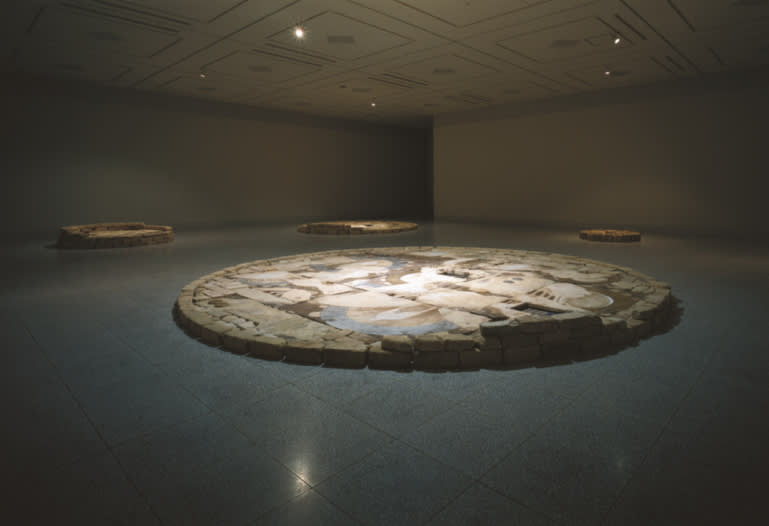 Shibakawa's series is titled "Planet Circle." With circles representing the sumo ring, he expresses the eternal universe. He said, "When a sumo wrestler has been pushed to the edge of the ring by his opponent, he avoids being pushed out by turning in the ring. Planets also revolve around a star like that." The sumo ring is made of straw bags arranged in a circle 4.55 meters across, in the center of a square mound of earth, according to Shibakawa. Some people liken the square to the planet Earth and the circle to a celestial body, he said.

Sumo also stirs the hearts of musicians. Sachiyo Tsurumi, 42, a composer, has produced piano and other pieces of music on the theme of sumo since around 2015. She has composed 10 pieces, including "Asadaiko (Morning drum)" and "Sumo piano taiko (Sumo piano drum)." "The sound of a morning drum (announcing the opening of a sumo event) is invigorating, and the unique intonation of the caller (calling the names of wrestlers to bring them into the ring) sounds like a song. And the referee who controls the match resembles a conductor. The world of music is found in sumo," Tsurumi said. 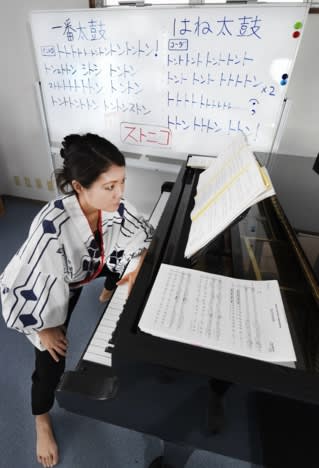 Sachiyo Tsurumi plays a piano piece she composed on a sumo theme.

Tsurumi is producing an opera on the theme of Futabayama, a renowned grand champion famous for winning 69 consecutive bouts, in collaboration with fellow composers Makoto Nomura and Tomoko Momiyama. "Futabayama wrestled by cleverly using his opponent's own force. We want to compose a grand opera by relaxing somewhat like Futabayama," she said.

Sumo wrestlers used to be respected as men with divine power that transcended human strength. The power came not only from muscular strength but incorporated the strength of the mind as well. Sumo's spirit has been nurtured since ancient times by the Japanese, who place emphasis on politeness and consider humility a virtue.

Kimura said, "Passing sumo down to future generations in its proper form at the same time preserves Japanese spiritual culture." By appreciating pieces of art, we will be able to renew our awareness of sumo's aesthetic and spiritual culture as the artists express them.