TAIPEI -- Most of the hand-wringing in Asia over the havoc wreaked by the pandemic has been around the economy. Yet art and culture, a sector that can uplift spirits in these troubled times, has largely been overlooked by governments.

With museums across the world shut down to crimp the spread of the virus, these institutions are fighting for survival by devising creative ways to reach audiences, such as making their collections available to view online using virtual reality, videos and livestreams.

Taipei's National Palace Museum, renowned for the world's largest collection of Chinese artifacts, is one such institution. Inspired by the popular movie "Night at the Museum," the Taipei museum is making a 10-part series, called "Palace of Serendity," centered on 10 exhibits that will be personified by actors who must find ways to creatively cope with long quarantine spells.

In one episode, the museum's well-loved "Pottery Figure of a Standing Lady" from 7th-century Tang dynasty comes alive. A figure of melancholy, she makes herself up meticulously every day, in hopes that her lover will return. In another, a Qing dynasty artifact "Jadeite Cabbage" is represented as an earnest chef who makes the best of quarantine by livestreaming cooking demonstrations from home. The National Palace Museum's celebrated 7th-century Tang dynasty work “Pottery Figure of a Standing Lady,” top, comes to life, bottom, in a 10-part TV series titled “Palace of Serendipity.” In the series, 10 of the museum's cherished works transform into people who are forced to cope with life under quarantine. (Courtesy of the National Palace Museum)

Museums around the world are investing in these so-called "crossover" projects to remain in the public eye. But experts say these projects may be able to do even more. The National Palace Museum has traditionally relied on income from foreign tourists, but with travel bans imposed globally last year, it said that visitors fell by 500,000 in the first 10 months compared with the same period in 2019.

The Taiwan Tourism Bureau estimates that the number of inbound tourists will have plunged by about 10 million for the entire year. With that income stream devastated, museums hope that the crossover projects can help to draw in another crowd - young people. Not just during the pandemic but also in the future.

Taiwan's youths tend to shun the National Palace Museum and National Museum of History in Taipei, seeing these institutions as being mired in the past, and their objects a legacy of China. Indeed, many of the National Palace Museum's nearly 700,000 pieces belonged to the imperial courts from the Song to Qing dynasties (A.D. 960 to 1911), while the National Museum of History has over 63,000 exhibits from oracle bone scripts and bronze wares in the Neolithic Age (B.C. 10,000 to 4,500) to tricolor-glazed ceramics in the Tang dynasty and art created after World War II.

Now, the crossover projects can give these items relevance to a younger generation in a way that they can easily understand and access. 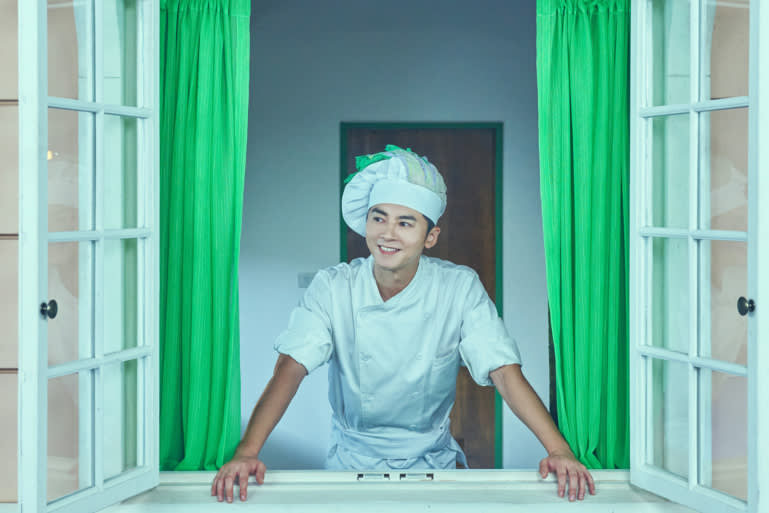 In another episode of "Palace of Serendipity," Qing dynasty sculpture “Jadeite Cabbage,” top, is transformed into a chef who livestreams cooking demonstrations to his online audience. (Courtesy of the National Palace Museum)

Museums and galleries in cities like Paris and London draw young people across the world but Taiwan's youths may not be aware that there are paintings by "Chinese Matisse," the late Sichuan-born French artist Sanyu, at their doorstep.

The National Museum of History is home to 49 Sanyu paintings, among the most sought-after in Asia. His "Five Nudes" sold for a record $39.1 million at a Christie's auction in Hong Kong in November 2019.

The museum also houses over 150 paintings by Zhang Daqian and around 204 pieces of work by Pu Ru, cousin of China's last emperor, Pu Yi. Both are late Chinese ink masters who fled to Taiwan after 1949 and are known as two of the "Three Masters Crossing the Sea" in the art world.

Despite owning such lauded works, National Museum of History Director-General Liao Hsin-tien said: ''Brand positioning has been our greatest challenge." The museum has had to find ways to "rejuvenate."

To this end, it has partnered with young fashion designers, comic illustrators and even pop singers to try to bring to an audience its acclaimed collections. Its latest effort, launched in October, is "NMH Grand Hotel," a partnership with celebrated Taiwanese fashion designer Justin Chou. The National Museum of History's Grand NMH Hotel project, set in a hotel in downtown Taipei, took designs and patterns found on pieces in the museum, including ancient belts and ink paintings, and incorporated them into the hotel's decor. (Courtesy of Justin Chou)

Set against a backdrop of a genuine hotel in downtown Taipei and drawing inspiration from the movie "The Grand Budapest Hotel," the project imprints onto hotel furnishings and furniture images of and from the museum's artifacts, be they belts worn by officials during the Warring States Period (B.C. 475 to 221) or ink paintings from the early 20th century.

"Many of the museum antiquities were daily necessities used hundreds or thousands of years ago," Chou said. "With the backdrop of a hotel, these pieces of ancient art leave a museum's walls and return to our daily life, allowing everyone to gaze, feel, touch or even sit on, as they were appreciated and utilized in ancient times."

The collection was inspired by the museum's most well-liked pieces, including calligraphy by Wang Xizhi of the Jin dynasty (A.D. 266 to 420), and "Jade Boy and Bear" and "Jadeite Cabbage with Insects,'' both works from the Qing dynasty. These garments were interwoven with crafts and materials made by Taiwan's Indigenous tribes, including bead and rush weaving and indigo dyes.

'While none of our antiquities were on display at the fashion show, we attracted a significant new target audience and publicity in the West," said Aaron Kao, intellectual property licensing chief in the National Palace Museum's cultural creativity and marketing department.

''Thanks to the event, our museum began to gain media coverage in Western fashion press, a step beyond our traditional media exposure in culture and art sections," Kao added.

If the pandemic has brought anything good, it may be that it gave the museums pause to reflect and recreate themselves to remain relevant in the future. Sustainability is an issue that will continue to preoccupy museum managers, as they find bold ways to continue to engage the public.

''The less unlikely a crossover partner may seem, the better publicity it will achieve for the museum," said the National Museum of History's Liao.