TAIPEI -- War, honor, family and love are universal themes that transcend border, culture, language and time. Taiwan's leading Peking opera company GuoGuang proved this with its lush sellout revival of "Sunlight After Snowfall" late last year and is now planning to tour the opera overseas, starting with a Chinese-speaking region.

Chinese opera is not always considered to be "accessible" to mainstream audiences but leading Taiwanese playwright Shih Ju-fang's piece tells an ageless tale of how families are forced to separate by military conflict. It also explores the theme of how immigrants struggle to settle and regain their identities as strangers in a strange land. In today's world where conflict is rife and expansionary forces threaten smaller nations, Shih's tale is more relevant than ever.

"History classes in school often teach students about the grand plans of our nation, and the traditional Chinese opera audience is also used to watching a production about the grand plans of their nation, but this play is trying to highlight the fact that a nation's rising power [via military campaigns] often has nothing to do with an individual's happiness," said Shih who is known for writing original Chinese- and Taiwanese-styled operas.

The ambitious scope of the story, originally opened in 2007 and played again at the local National Theater in October, was elevated by its magnificent form that included a gorgeous set incorporating intricate Chinese calligraphy and luxurious, colorful costumes. It is also an aural delight combining Chinese opera and Western musical-style singing accompanied by a live orchestra.

It was an audacious move by GuoGuang to revamp Peking opera by infusing storytelling and performance techniques from the West and recast a part of China's long, war-scarred history in a contemporary context to attract a younger audience to an old art form.

"Newly written Peking operas usually have a fuller plot than traditional ones because in the past when it came to Peking opera, the audience was expecting a show [focusing on stage fight and singing], and the demand for a story only emerges recently," Shih said. "But again compared to these new operas with the aim to tell a story, 'Sunlight After Snowfall' still has a much bigger scope and it is much more complex."

The mesh of the East and the West also brought out the best from an ensemble of emerging Taiwanese actors, who are well-trained in sword fights and acrobatics as required in Peking opera and also good at finding unique interpretations of their characters to bring out dramatic tensions and tug at the audience's heartstrings.

The plot spans some 1,700 years and tracks how a copy of "Sunlight After Snowfall," a now lost work by Chinese calligrapher extraordinaire Wang Xizhi from the 4th century, found its way from mainland China to Taiwan amid constant political upheaval and a string of wars. 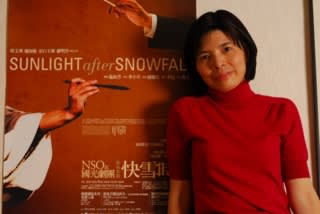 Playwright Shih Ju-fang is known for her original scripts for Chinese- and Taiwanese-styled operas. (Photo by Lin Li-fang)

The journey of the scroll was interwoven with the imagined life and afterlife of Wang's friend Zhang Rong, a small-time overlord who fled from northern China to the south due to war but still continue to be obsessed about reclaiming his hometown despite having lived in his adopted land for 50 years.

Zhang lost his life fighting a failed campaign to retake his hometown, oblivious to his loving daughter's unvoiced yet palpable worry. The ghost of the overlord embarked on a centuries-long expedition following the calligraphy and later its copy around, witnessing the damage wars wreaked on lovers, brothers and families.

The themes in "Sunlight After Snowfall" echo in many of Shakespeare's works, and especially in the Henriad series in which Sir John Falstaff's disdain for fighting in the name of a ruler is a key idea.

The elegant classical Chinese Shih boldly writes her play with made it challenging for some audience in Taipei to follow, but it has the ring of Shakespeare's poetic language. The solemnity of the production is further enhanced by the presence of a Mother Goddess, played by leading Peking opera singer Wei Hai-min, and a choir, which formed a powerful element on stage akin to a Greek chorus. Leading local baritone Wu Bai Yu-hsi's performance as Emperor Qianlong was another highlight of the show.

Among the different plot lines in the opera, one detailed the lives of those who fled to Taiwan from China 1949 after Generalissimo Chiang Kai-shek's Nationalist troops lost the Chinese mainland to Mao Zedong's Communist Party -- a subplot that reflects contemporary Taiwanese and Chinese politics.

"To use Peking opera to tell a Taiwan story, I thought it was most appropriate to tell a story that features the life experience of those who came from China to Taiwan in 1949," Shih add.

With this revival after a decade, GuoGuang is seeking to take "Sunlight After Snowfall" on an overseas tour with the possibility of working with local orchestras. The company won't reveal details but hopes that its first overseas production will be staged in the second half of this year.

In 2007, the administration of then President Chen Shui-bian commissioned GuoGuang to create a brand-new Peking opera centering on the Taiwanese experience at a time when the pro-independence leader and his supporters were keen to establish a unique identity, cultural and otherwise, to distinguish the island from China.

GuoGuang and Shih gave them something better. "The revival is quite different from the first production in [2007] ... back then there was a stronger element of cross-strait politics at play," Director Dai Chun-fang of the revival said. "This time we changed the direction and I tried to put the work in a bigger historical, cosmic context and tell a story with universal themes."