Jiab Prachakul emerges as an outsider ahead of her game BANGKOK -- In London's National Portrait Gallery hangs the painting "Night Talk," depicting two friends sitting at a low wooden table in a Berlin bar. The mood is tender yet awkward, the kind that exists only between intimate acquaintances.

The painting, by the Thai artist Jiab Prachakul, is the winning entry in this year's BP Portrait Award, one of the world's most prestigious art competitions, marking the first time an Asian artist has won the top prize in the award's 30-year history.

Even more remarkably, Jiab has never formally studied art. In fact, it took the 41-year-old more than two decades to realize that she wanted to be an artist.

"Back in my high school, I studied math and science. I kind of had a talent in art, but I didn't continue with it because my father didn't encourage me," she said. "Then we had a little problem in the family and no one really cared anymore what I wanted to study."

Jiab got the creative release she craved when she was accepted to study film at Thammasat University in Bangkok. During a summer break from the university she got the only training in art she has ever received -- a crash course in drawing from her brother, an amateur artist and successful songwriter. "I said, 'can you teach me?' And he said, 'OK what you have to do is start from the eyes and get the proportion right.' We did that for about a week," Jiab said.

After she graduated, Jiab got a job with a film production house, casting and editing. "At that time I felt I could really express my artistic side. It wasn't painting, but film is something I have a lot of passion for," she said. Jiab has felt like an outsider all her life, which she says has shaped her perspectives and her approach to art. (Courtesy of Jiab Prachakul)

But Jiab was restless. As she listened to her worldlier colleagues effusing about London's art scene, she felt an urge to leave Thailand. "When you're in your home country you only think about which profession will give you stability, a good income, a good lifestyle," she said.

Jiab moved to London in 2006 with a vague plan to continue with film work, and found a job in a Thai restaurant to tide her over. But fate quickly caught up with her. That same year, at an exhibition by the British artist David Hockney, she felt certain of her destiny.

"I remember thinking, 'Later in life I will be too tired. Before I was too young. This is my time to go for it,'" she said.

Jiab moved from West London to East London's Brick Lane, a creative cauldron of the U.K. capital's art scene, where she recalls stumbling into the well-known artists Gilbert and George in an alley one morning. "It really captured the feeling of being there," she said. Tony Taglianetti, who founded the Brick Lane Gallery in 2006, said East London at the time was "really fertile ground for art because of the [many] galleries that were popping up."

The art coming out of Brick Lane was largely conceptual, a continuation of a trend that had emerged a decade earlier during a cultural renaissance known as Cool Britannia.

Though representative painting was making something of a comeback toward the end of the decade, Jiab insists she was never influenced by trends or market forces in pursuing figurative work and portraiture; rather, she sought to convey her love of characterization in film and the power of still images.

When the global financial crash hit in 2008, Jiab moved to Berlin. In between designing and selling clothing accessories, she worked relentlessly to hone her drawing and painting skills by studying the works of artists she admired, such as Lucian Freud. 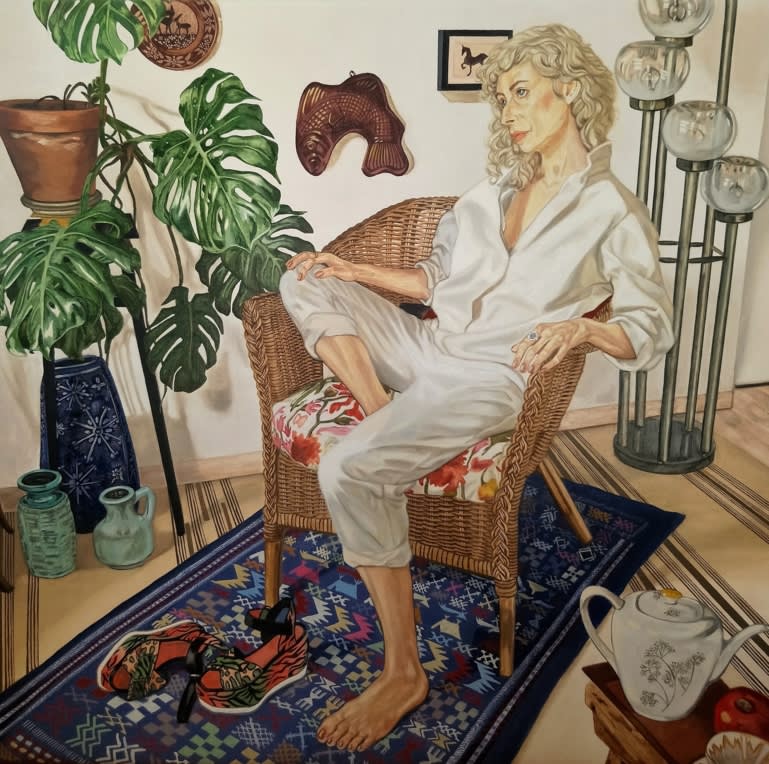 She also derived inspiration from Berlin's liberal attitudes toward gender, sexuality and androgyny, a characteristic that she said has resonated with her ever since lost her mother at an early age and was brought up by her father and three brothers, causing her to repress her femininity.

"Berlin was so free," she said. "You could walk in the street and see a couple and the guy would look like a girl or the girl would like a guy, and they're merged into one. That's what I really like, and I try to depict that in my style," she said. Jiab was also coming to terms with her many years abroad and questioning her identity, feeling no longer wholly Thai or wholly European. She found expression in these themes through her friends, who were also Asian expatriates embracing a culture different from their own.

One of her first works that combined all these ideas was "Sakamoto Brothers," a painting of two Japanese siblings floating in midair looking bored. The work's air of dry humor pokes fun at the stuffy traditions of portraiture, while parodying Japanese animation.

"That's when I did something that I thought was really in my style," she said.

Having hit her stride, Jiab left the diversity and dynamism of Berlin for a quieter life in Lyon, France, in 2018. It may have seemed like a strange move, but Jiab said that location is irrelevant to her work, adding: "It matters more that I keep a sense of perspective and an open mind." "Sakamoto Brothers" is one of Jiab's first pieces to explore the themes of identity and fashion that have come to define her style. (Courtesy of Jiab Prachakul)

Speaking from her studio in Lyon, Jiab said she had achieved success because of her lifelong "outsider" status, rather than in spite of it, noting that she knows many people who went to art school but emerged artistically broken by the snobbery of their superiors. Derision and dismissal from friends and academics had made her stronger, she said.

Looking forward, Jiab said she plans to produce a series of paintings with cinematic qualities that will communicate the themes and emotions explored in "Night Talk," which she described as "just the start of my concept."

But she knows the next stage of her life will test her artistic integrity as she gains recognition from the art establishment and her work rises in value. "For me, art has never been about making it or not making it. It was just something I felt I had to do," she said. "And in the end you have to answer to yourself."