HONG KONG -- Ramen chef Fish arrives in a park before midnight in Tin Shui Wai, a remote Hong Kong district close to Shenzhen, to join his friends who are blasting beat music from a dimly lit corner. At first glance, the group of five masked men can seem intimidating. But they are simply dancing and their masks, a sign of the times.

Thirty-year-old Fish is an elite street dancer. Not an easy way to make a living in the best of times in a city that thrives mainly on business and finance, and other "serious" pursuits. Now laid low by COVID-19, Hong Kong is an even tougher place for these performers who can only find comfort dancing for each other and themselves, in places such as this park in Tin Shui Wai.

"Have I thought about becoming a professional dancer? Of course, I have. But I knew it's not easy from the very beginning, because Hong Kong, out of all the places in the world, is such a pragmatic place," said Fish, who had not long finished a 12-hour shift at a Japanese restaurant.

Many street dancers lead double lives. During the day, they are cooks, programmers, designers, drivers, and salespeople. In the evenings and at weekends, they become poppers, lockers, B-boys, and waackers, freestyling along the city's alleys, university hallways, harborfront sidewalks, and in industrial buildings.

Street dance still does not have the respectability accorded to mainstream performing arts such as ballet and contemporary dance. Few in Hong Kong have developed a taste for the genre that originated from Black American culture decades ago.

Without much government support, few street dancers in Hong Kong have managed to turn their passion into sustainable careers. The last 18 months have made the future even bleaker. The pandemic, as well as prolonged street protests in 2019, made gatherings in public areas at first less desirable, then banned. Ramen chef Fish dances with friends regularly in a remote park in Tin Shui Wai after finishing his 12-hour restaurant shift. Fish, 30, says it’s not easy to start a serious dancing career in a city as pragmatic as Hong Kong. (Photo by Paul Yeung)

Dance studios were forced to close, while events and performances have been either been canceled or postponed indefinitely. Some dancers lost their day jobs as the city faced the worst economic and political crises in its history.

Luckily for 26-year-old Indonesian Gerin Kharis Putera, his day job as an engineer is safe. He sees current restrictions themselves as a form of training. The studio he used to dance at is closed, so he practices in a 4 sq. meter space in his home in Causeway Bay, somehow maneuvering his way around a desk, bed, sofa, and a washing machine. Bruises cover his legs. 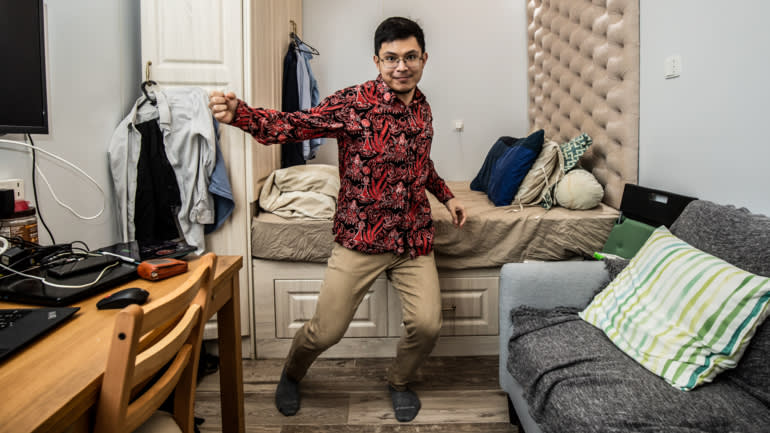 Indonesian dancer Gerin Kharis Putera must maneuver his way around a desk, bed, sofa and washing machine to practice inside his tiny Hong Kong home. (Photo by Paul Yeung)

"For me, a good dancer should be able to adapt to different kinds of spaces. If you have a small space, you just have to make the fullest of it. I treat it as a challenge," said the locker. Locking is a dance style that involves suddenly freezing after fast-moving actions, performed to funk.

In this parched landscape for dancers, Putera finds some joy online. He uploads his homemade videos to Instagram to partake in competitions.

"My career is very different from dancing. It's very logical, following the rules," the engineer said. "Dancing is open and free. I can be like a kid again and just have fun." 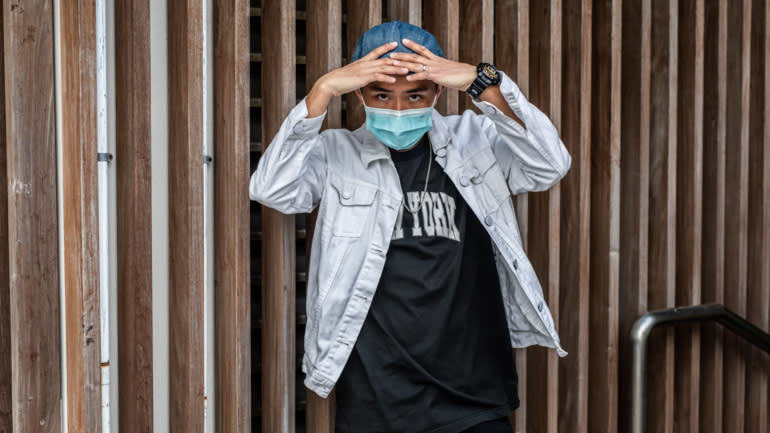 After the pandemic forced an end to his teaching sessions and public performances, dance instructor Lee Chun-wah was forced to take a part-time job in logistics. “The pandemic made me realize that one needs to have the ability to make money [outside dance] to be able to keep dancing,” said Lee. (Photo by Paul Yeung)

For Lee Chun-wah and Wong Hay-tak, there is nothing like dancing to the glittering Hong Kong skyline from a footbridge in Tsim Sha Tsui. The two are among the earliest professional street dancers in the city, but have had to cut the rest of their crew to comply with social distancing rules.

"We still come out to dance because we really love it," 38-year-old Lee said in November during one of their Sunday gatherings. A group of patrolling police officers with a loudspeaker would walk by from time to time, urging the crowd to observe the rules.

Dealing with police is nothing new to Lee. In 20 years of street-dancing, the award-winning Lee said, "We were shooed away by the police and security all the time. Some people would complain that we are being too noisy." Lee said there is still stigma attached to street-dancing which is often seen by Hong Kongers as a nuisance.

In land-scarce Hong Kong, street dancers have few places they can feel at home in. University campuses were once a hub for them but these have been closed to the public after protests in 2019 turned them into battlefields between police and student demonstrators.

Before the pandemic, Lee was one of the fortunate few who were able to make a living from dancing. Now, with his teaching sessions and performances suspended, the father of a one-year-old has become a part-time courier to make ends meet.

"The pandemic made me realize that one needs to have the ability to make money [outside dance] to be able to keep dancing," he said. His passion undimmed, he said, "I dance with or without being paid." 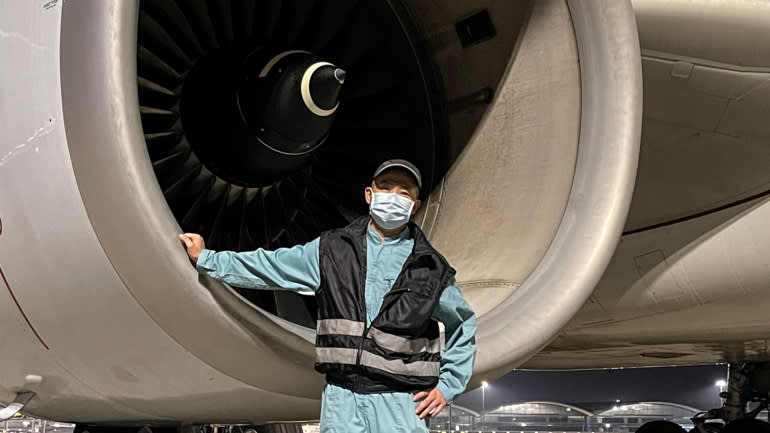 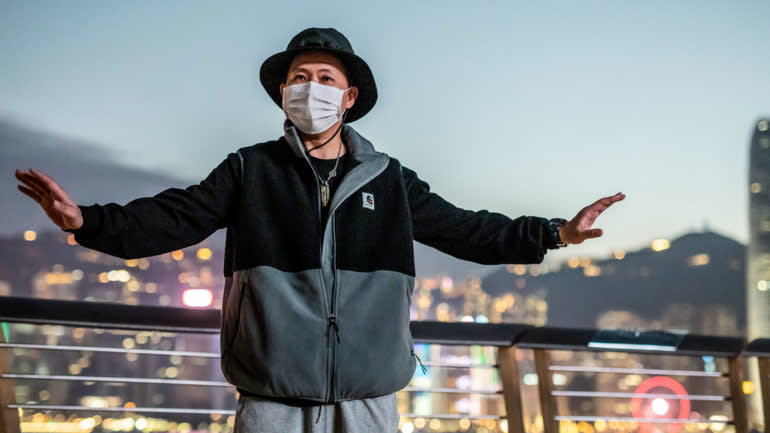 Known in dance circles as Hayboogie, Wong Hay-tak uses the footbridge in Tsim Sha Tsui as a kind of stage, with the glittering Hong Kong skyline the perfect backdrop. Wong, 44, was forced to take unpaid leave from his job as an airport night-shift driver after the pandemic brought travel to a standstill. (Photo by Paul Yeung)

His dance partner Wong, known in the industry as Hayboogie, was forced to take unpaid leave from his job as an airport night-shift driver after the pandemic caused travel to plummet.

"It's just hard to carry on when you have to fight for every meal. Life is so stressful in Hong Kong and I think about giving up [dancing] all the time," said the 44-year-old. For now, he still shows up to this spot on the waterfront in his signature bucket hat for the sense of freedom and peace dancing gives him.

Others, though, use dance to express their feelings about society and politics. During anti-government demonstrations in 2019, Kaspy, a krump dancer and a daytime barista, made a video to protest police brutality. Krump refers to a form of freestyle street dance. Hong Kong krump dancer Kaspy -- who supports himself working as a cook -- made a video protesting police brutality during the 2019 anti-government protests. “The political environment is certainly having an impact on dancers. We create art based on what happens in our life and society, and we should not avoid it,” Kaspy said. (Photo by Paul Yeung)

"Every day, I watched so many negative news about the protests, but I can't find a way to release my feelings," he said.

In the widely circulated video, the 30-year-old, in a black T-shirt -- the typical garb of Hong Kong protesters -- performed a vigorous routine to powerful music and animated protest slogans in an industrial building.

But since then, Kaspy and his friends had stopped making such videos, worried that their works will be seen as promoting independence for Hong Kong, particularly after the imposition of the wide-ranging national security law last year.

"The political environment is certainly having an impact on dancers. We create art based on what happens in our life and society, and we should not avoid it," he said.

Kaspy has thought about leaving Hong Kong but has no resources with which to begin life elsewhere. "I want to leave but I don't have the money," said the dancer who still lives with his uncle.

His predicament is one that Elaine Lam, founder and general manager at the Hong Kong Street Dance Development Alliance, sympathizes with. "Street dance is an industry for young people. But the young people in Hong Kong have very limited disposable income," said Lam. Without government support, dancing is not a career option, she said.

The alliance organizes the annual Hong Kong Street Dance Championships and has never been able to make money from any of the competitions and activities it holds, largely due to high cost of venue rentals and hiring judges.

By contrast, street dance is developing in other Asian territories. The style is part of many primary school curricula in Japan, Lam said, while the South Korean government has invested heavily in nurturing street dancers artists and funding international exchanges. The government in Taiwan has opened a large number of public spaces to dancers, including the front of city halls. In China, elite street dancers have become well-known celebrities after taking part in variety shows.

"It's not that Hong Kong does not have talented dancers. It's the structural and fundamental issues that prevent the development of street dance in Hong Kong," Lam said.

Until that changes, Hong Kong's street dancers will have to cling on to the reasons why they love the form. "I am completely a different person when I dance. I get to be myself, and not think about others," Hayboogie said.