In 2017 came a 90-minute "La Traviata" set in a local shopping mall, then a shortened "Tosca" the next year in a luxury product showroom. Third time, though, was not so lucky. Hasegawa's version of "Carmen" was canceled twice, first in 2019 during Hong Kong's pro-democracy protests, then again in 2020 when the COVID pandemic closed down public venues.

But when Hasegawa, 62, saw other opera companies around the world faring no better, she decided to suddenly shift gears. "This had to be the worst time to be in opera, but the banker in me thought this might be the best time for us to expand," said Hasegawa. "If so many other small opera companies needed help, maybe we could all work together."

After a long conversation with U.S.-based producer and set designer Julia Noulin-Merat, who created the scenery and costumes for her ill-fated "Carmen," Hasegawa realized she had a partner whose enthusiasm -- and contact book -- matched her own.

"Rumiko kept asking how they could enter the American market," said Noulin-Merat. "Many opera companies were turning to the internet, often making short art films with new music. But I knew of at least 13 stage productions of 'La Boheme' that had been canceled in 2020, so audiences who wanted their classics were being left behind."

With Noulin-Merat as executive producer, Hasegawa's theatrical company More Than Musical embarked on its most ambitious project to date: a 90-minute film of "La Boheme" made in partnership with Opera Columbus, Opera Omaha and Tri-Cities Opera in Binghamton, New York.

Shot on location in New York City during the pandemic, on a shoestring budget of just $115,000, the film reinvents Puccini's young Parisian artists as multiethnic hipsters in Williamsburg and Chinatown, updating the story's original themes of sickness and poverty with contemporary threads of racism and immigration. 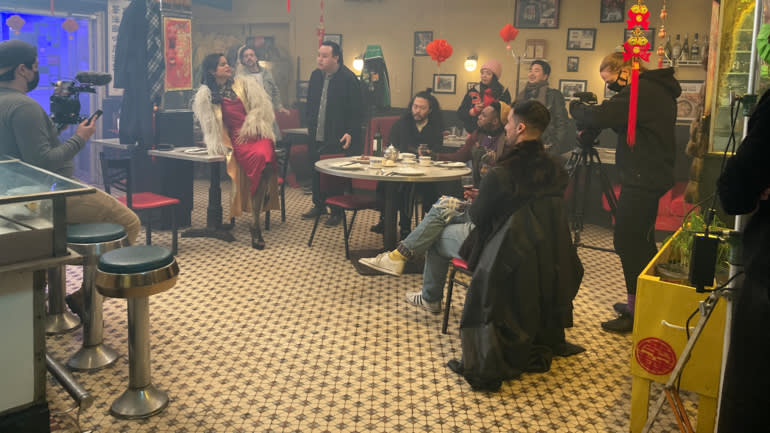 "From the beginning, we needed to keep our Hong Kong perspective," says Hasegawa. "That meant hiring young Asian artists-or at least casting ethnic minorities as the leads, with as many Asians as possible." In a year noted as much for racial tensions as pandemic lockdowns, that also resonated heavily in the U.S. "We wanted to hire emerging talent in America that actually represented the entire world," said Noulin-Merat.

Hasegawa, who left investment banking in 2012 after becoming Goldman Sachs' first female partner in Japan, caught the opera bug on a business trip to Manhattan in the 1990s. Retiring in Hong Kong with her American husband and their daughter, she quickly fell into the city's opera circles, but the resistance to the art form she found among younger colleagues led her to form her "boutique opera company" with Lucy Choi, whom she met singing in the Opera Hong Kong chorus.

"We wanted to create something that was 'more than musical'," says Hasegawa, explaining their name. "The main thing we agreed on was not to use the word 'opera', since 80% of the people we wanted to reach would probably tune out."

Noulin-Merat, born in Montreal and raised in France as an avid theatergoer, had no such qualms. "Opera is the Olympics of art forms," she says. "It's a visual art within a performing art, where everything comes together. It just drew me in."

Returning to Canada to study medicine, Noulin-Merat soon switched to theater studies, eventually winding up with degrees in production design and arts administration, both from Boston University. "I was excited by the renaissance in opera that was happening in the U.S.," she recalls. "When I started professionally, I'd say 'Please let it be in opera.' I just should've been more precise, because for two years I wound up working in soap opera."

Two decades and hundreds of stage productions notwithstanding, it was probably that early breakneck pace of daytime television that paved the way for "La Boheme."

Having signed onto the project in early December last year, Noulin-Merat immediately reached out to opera director Laine Rettmer, a colleague from New York's now-defunct LoftOpera whose 2014 stage production of "La Boheme" was, according to The New York Observer critic James Jorden, "as true and moving as any I can remember in 40 years of opera-going." Rehearsals began the third week in January, filming began in mid-February. The initial plan to use two real-life couples as the principal characters hit a snag when the actors playing romantic leads Mimi and Rodolfo got stuck in quarantine in South Korea. Then the original Musetta couldn't get released from an existing contract. Within days they found tenor Ziwen Xiang and soprano Bizhou Chang -- two Chinese-born singers who had learned the roles but never performed them.

They also found mezzo-soprano Larisa Martinez, a rising star who had sung the role in Rettmer's LoftOpera production. Countertenor Anthony Roth Costanzo, much in demand since playing the title role in Philip Glass's "Akhnaten" at the Metropolitan Opera, reinvents the toy merchant Parpignol as a drug-dealing drag queen.

"'Boheme' lends itself to this kind of exploration," says Noulin-Merat. "In our story, Mimi suffers from COVID, so to justify ourselves whether or not we wear masks we set the production in February 2020, when we were all just figuring out what the pandemic was."

The 35-member cast and crew embraced New York as an open-air film set, partly to document the look and feel of the COVID-ridden city.

The opera's cafe scene was shot at the iconic Nom Wah Tea Parlor during Chinese New Year, three days after New York restaurants had returned to indoor dining. Mimi and Rodolfo's breakup was set at a bone-chilling Coney Island at 3 a.m. All singing was prerecorded and lip-synced for the camera-common practice in movie musicals, but particularly crucial during a pandemic.

"People had flown in from all over the country, with different mask requirements," says Noulin-Merat. "We had regular testing and social distancing, but people were free to determine their own comfort level." Now that the finished film is streaming on-demand through July on Boston Lyric Opera's website, Noulin-Merat and Hasegawa are pursuing film festivals and other cinematic venues, particularly in Asia. Hasegawa now relishes film as "a second product line" along with immersive live performances.

Noulin-Merat's horizons likewise expanded, having been appointed both Creative Director of More Than Musical and General Director and CEO of Opera Columbus during the film's four-month production period.

"Together with the internet, the pandemic opened doors so that a small company in Hong Kong can communicate with companies in America and actually create projects together," she says. "This is an exciting time."