TOKYO -- Art brut (raw art), a genre that in recent years has exerted increasing influence on many trained contemporary artists, has found a new home at the Tokyo Shibuya Koen-dori Gallery, a nonprofit space sponsored by the Japanese capital region's government through its Tokyo Metropolitan Foundation for History and Culture.

The gallery, which is managed in collaboration with curatorial specialists from Tokyo's Museum of Contemporary Art, was inaugurated earlier this year, but its programming was interrupted by the coronavirus stay-at-home period. Now, once again open and active, and easily found near Shibuya Station in one of Tokyo's most popular shopping-and-entertainment districts, it is offering an exhibition featuring works by 18 artists, which is on view through Dec. 6.

The exhibition, "In a Sky Full of Shining Stars, Unknown Gems Can Be Found," has been organized by the gallery's sponsoring organizations in collaboration with Aiseikai, a social-welfare organization in Tokyo for disabled people, whose facilities include an art-making workshop.

It was the influential French modern artist Jean Dubuffet who, in the 1940s, gave the name "art brut" to the hard-to-classify drawings, paintings, carvings and other forms of peculiar, deeply personal artistic expression he had discovered and collected during his research travels in Europe. They had all been produced by inventive creators whom Dubuffet found living on the margins of mainstream society and culture, either by choice or by force of circumstances (such as psychotic patients in psychiatric hospitals who had been making objects of aesthetic-diagnostic value long before modern art-therapy programs were developed).

Dubuffet admired the originality and visionary character of such creations. Their makers had not studied at art schools and did not make their art in dialogue with the styles or critical theories of academic art history. For Dubuffet and other admirers of such unexpected works of art, their inexplicability was part of their allure, along with their innovative technical aspects -- their use of fabric, cardboard or found materials. Top: The entrance to the exhibition "In a Sky Full of Shining Stars, Unknown Gems Can Be Found," at Tokyo Shibuya Koen-dori Gallery. Bottom: Tiny animal figures made with sawtooth-oak leaves by Yoshihiro Watanabe. (Photos by Edward M. Gomez)

By the end of the 20th century, a specialized sector of the international art world focusing on art brut and "outsider art," a term that emerged in English-speaking countries in the 1970s to refer more broadly to the same phenomenon, had evolved, with its own museums, galleries, publications and fairs.

In Japan there is little market infrastructure to support such art, but several nonprofit venues, often funded in part by Diversity in the Arts, a foundation linked to the government-funded Nippon Foundation, routinely exhibit the work of disabled people under the art brut label. Many of these art-makers participate in art-therapy workshops operated by social-welfare organizations.

More and more, their creations are finding outlets for public display. Unfortunately, however, art brut is associated almost exclusively with disabled people in Japan -- even though Dubuffet, who first articulated the characteristics of the new genre, never stated that art brut creators had to be affected by mental or physical disabilities. Mamiko Sato, one of Tokyo Shibuya Koen-dori Gallery's young curators, explained that, with this history in mind, the venue's approach to presenting works made by both Japanese and foreign artists "celebrates their self-taught status and innovative uses of materials, even as it seeks to situate what they make in the broader context of contemporary art."

Notable works on view in "In a Sky Full of Shining Stars" include Yoshihiro Watanabe's tiny animal figures, which are sculpted from folded leaves of the sawtooth oak and only a few centimeters tall. The artist, who lives in Kumamoto Prefecture, in southern Japan, moistens the tree leaves he gathers in the late autumn with his breath before folding them skillfully into the ingeniously abstracted shapes of horses, elephants and dogs. 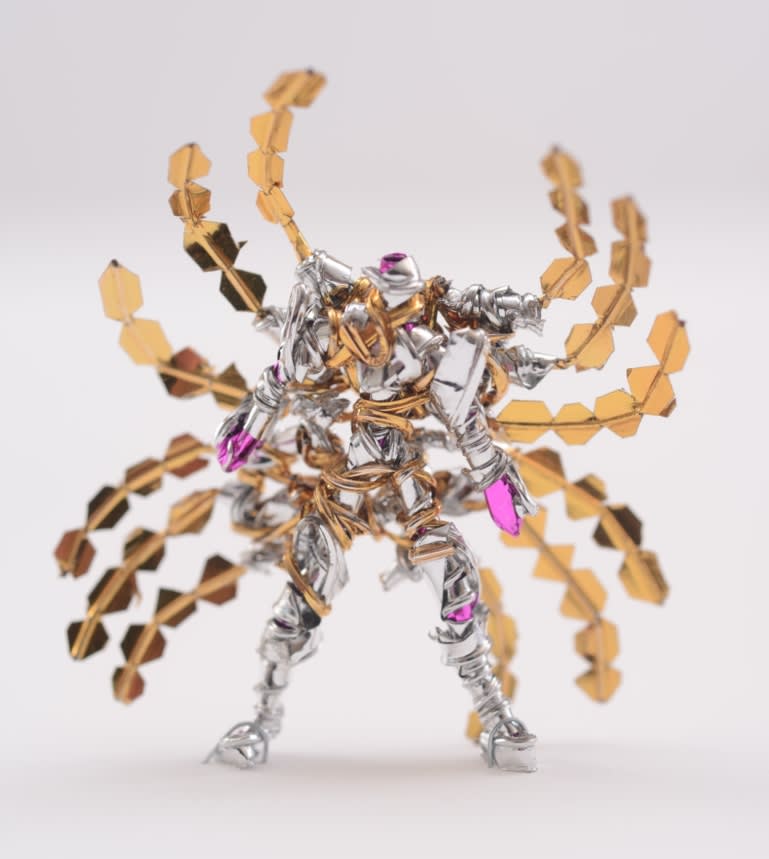 Top: An array of tiny warrior figures made with metallic-foil twist-ties by Shota Katsube. (Photo by Nobuo Onishi) Bottom: A close-up of one of Katsube's warriors. (Photo by Satoshi Takaishi, courtesy of Tokyo Shibuya Koen-dori Gallery)

The densely packed compositions of some of the works on paper reflect a horror vacui (fear of empty space) that often characterizes the art of people affected by psychotic illnesses; in Europe in the early 20th century, psychiatrists noticed this tendency in the artistic creations of such patients.

Here, Norimitsu Kokubo, a young man in his mid-20s who withdrew from those around him as a boy, filling his notebooks with drawings, offers detailed aerial views of cities in which perspectives constantly shift. Rows of buildings lining the opposite sides of streets lie flattened, as though run over by steamrollers, while cars, trains and other urban elements are seen in profile.

Kokubo works in pencil, colored pencil and ink. Like him, Yuichiro Ukai, who is around the same age and also lives in Shiga Prefecture, east of Kyoto, creates dense compositions (in oil- and water-based inks, and colored pencil on cardboard), but his are filled with dinosaurs, old sailing ships, historical costumed figures, giant snakes and chunky robotic characters. In recent years, they have been popular with collectors at the annual Outsider Art Fair in New York, where they have been shown by Yukiko Koide Presents, a Tokyo-based gallery. 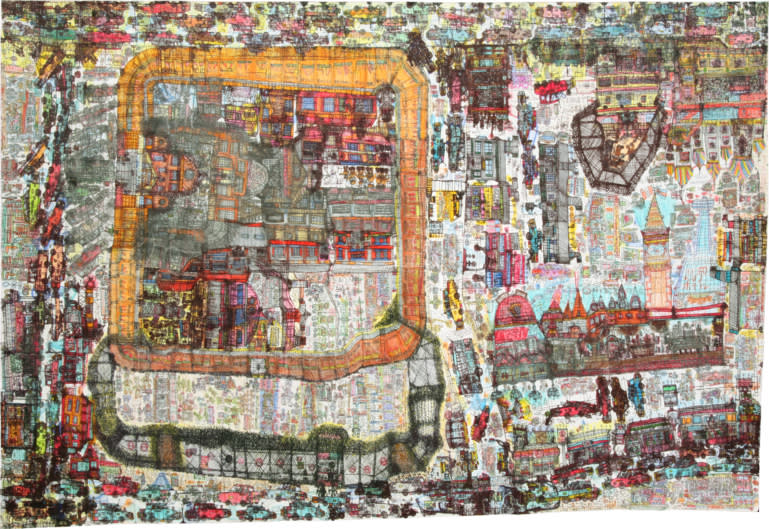 The artist Shinichi Sawada, who makes earth-colored ceramic sculptures of spiky, imaginary creatures, is probably the best-known contemporary Japanese art brut maker whose works are featured in the show. In recent years, they have been exhibited in Europe, including at the 2013 Venice Biennale. Among the most lusciously rendered -- and psychologically charged -- works on view are the colorful drawings in ink on paper of Marie Suzuki, which refer not so obliquely to sexual tension and are filled with stylized images of breasts, genitalia and other body parts in flowing, rhythmic images.

There is much more to take in, from Sekio Minobe's gentle geometric abstractions in colored ink on paper to Toshio Okamoto's expressionistic human figures in jet-black India ink. The edges of his large sheets of paper seem barely able to contain each one's monumental presence. Yutaka Miyawaki, the director of Galerie Miyawaki in Kyoto, a modern-art outlet that has actively presented both classic European art brut and the work of contemporary Japanese self-taught artists, told me, "A problem in Japan is that, even though the term art brut has become familiar, it's still not properly understood according to the concept Dubuffet originally proposed. This helps explain why this art's unique value has not yet been fully recognized or appreciated."

However, thanks to the efforts of a high-profile showcase like Tokyo Shibuya Koen-dori Gallery, working alongside commercial enterprises like Miyawaki's well-known gallery, local audiences may now begin broadening and deepening their understanding of the phenomenon of self-taught artists' strange, visionary creations. As the exhibition's title suggests, for visitors who take the time to examine its trove of curiosities, it is definitely one in which unknown gems can be found.