A haori jacket with a dragon design. Painting directly on clothes requires courage, as not a single stroke can be changed once it has been made. (Courtesy of Tamayo Samejima)
MICHIYO NAKAMOTO, Contributing writerDecember 6, 2019 14:01 JST | Japan
CopyCopied

TOKYO -- Tamayo Samejima kneels on the ground, rubbing a stick of black sumi ink against a flat ink stone. She takes a brush and applies the ink in bold strokes over the white surface before her, moving from right to left, creating what looks at first glance like a work of abstract art.

With the deft strokes of a master sumi-e artist, Samejima quickly brings to life a magnificent crane. But she is painting not on washi paper -- the traditional support for sumi-e ink art -- but on a white kimono, the traditional wedding costume for young women.

The live painting performance by Samejima, a sumi-e artist, art writer and translator, seems initially like a bold break from tradition. The art of sumi-e is more commonly associated with washi paper scrolls that are hung in the tokonoma (alcove) of a room floored with traditional tatami mats, and with fusuma (sliding paper doors).

Yet Samejima's on-the-spot artistry follows a long tradition of painting on kimonos, a practice known as kakiage yuzen, or musen yuzen, which dates from at least the 14th century. Kakiage yuzen is one of several techniques used to embellish kimonos, but it is dying out because of the sharp decline in people wearing the garment, according to Nao Okajima, associate professor at Bunka Gakuen University, a fashion, design and liberal arts college in Tokyo.

Kakiage yuzen is also "a one-shot endeavor," in which not even a single stroke can be changed once it has been made, and requires "a skilled artist and a courageous client," says Okajima. The traditional skills continue to be highly valued, however: A kimono hand-painted in indigo blue and sumi gradations by the renowned Edo period painter Korin Ogata (1658-1716) is designated as a national treasure in the collection of the National Museum of Art in Tokyo. 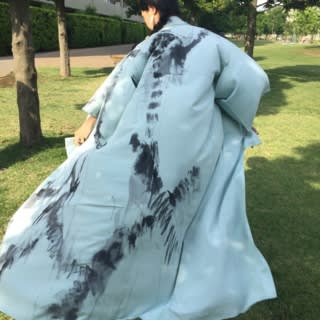 A kimono coat emblazoned with a cat drawn in sumi ink. (Courtesy of Tamayo Samejima)

During the Edo period (1603-1868), "wealthy merchants entertained themselves by commissioning artists to paint on kimonos," Samejima tells the Nikkei Asian Review. Yet painting directly on a kimono requires daring as well as years of disciplined practice. The artist has only a brush and ink to express everything from light and shade to movement and perspective. Even more daunting is the prospect of permanence: It is impossible to erase a stroke once it has been made.

This means that the artist must paint energetically, "by force of momentum," says Samejima, who comes from a family of artists and took up sumi-e when she was 18. Her mother is a weaver and ceramic artist, her grandmother an essayist and illustrator and an aunt is a painter. "My mother used to teach rattan weaving to her friends, and as a child I would collect the leftover rattan and make my own things with it," Samejima recalls.

Although demonstrating an artistic bent from an early age, Samejima initially chose to study Japanese art history at the prestigious Gakushuin University, the traditional alma mater of Japan's Imperial family. After graduating, she became an art student at Camberwell College of Arts in the U.K. 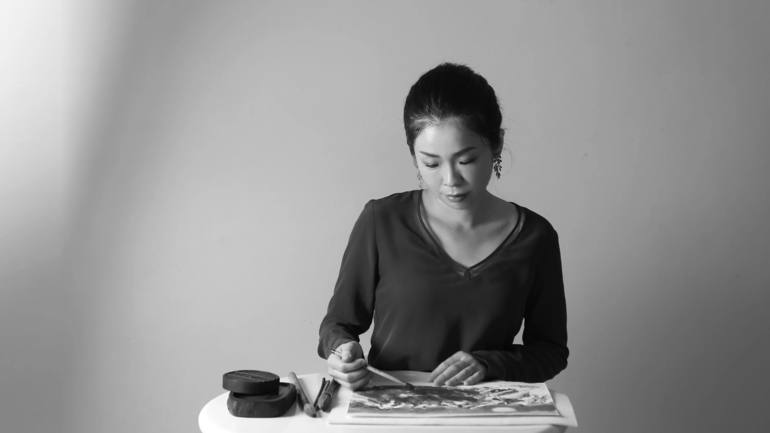 Samejima confesses to spending most of her college years at museums exhibiting contemporary art rather than in the classroom, and it was during that formative time that she felt herself drawn to sumi-e after discovering the work of Ka-oh, a Zen monk and sumi-e artist of the 14th century.

"I was drawn not only to the beauty of Ka-oh's work -- his use of light and shade, the bleeding and blurring of the ink, his masterly brushstroke -- but the way he lovingly portrays plants, animals and mythical Zen priests, in a way that suggests he had reached the stage of satori, or enlightenment," she says.

Her encounter with Ka-oh inspired her to study sumi-e under the instruction of an elderly teacher, Souu Meguro, who taught her the importance of directly observing plants and scenery and expressing her emotional response to the physical objects in her painting. "She also taught me to think carefully about the focus of the painting and to compose with that focus in mind," Samejima says. 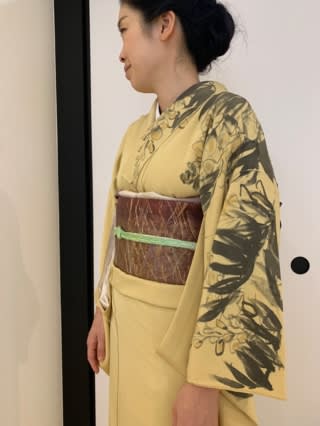 Samejima wears one of her hand-painted kimonos at a sumi-e exhibition she organized in Tokyo. (Photo by Michiyo Nakamoto)

A few years after taking up sumi-e, she was asked by her aunt to participate in an event featuring T-shirts decorated by artists. "I didn't find it difficult at all -- and really enjoyed painting on T-shirts," she says. "Painting on fabric that someone is wearing makes the canvas three-dimensional. I find that fascinating. When someone is wearing what you are painting, it is as if your work is once again infused with life," she adds.

But it was not until she went to study in London that Samejima discovered the commercial opportunities of modern clothes embellished with sumi-e, selling her T-shirts at a stall in Portobello Market, a street market in the Notting Hill district. A visitor to her stall admired the T-shirts and encouraged her to bring some samples to sell at his wife's boutique nearby. There, they were seen by a Japanese apparel buyer who asked her to supply him with T-shirts for sale at Tokyo stores such as Seibu in Shibuya and the Laforet shopping mall in Harajuku under the brand name TamayoINKception.

Samejima's custom-made T-shirts and button-down shirts with hand-painted sumi-e designs are available for 34,000 yen ($310) and 35,000 yen, respectively. A shawl with a delicate sumi-e floral painting is 20,000 yen, and a dress with an abstract design costs 17,500 yen. In a more traditional vein, an antique wedding kimono is priced at 60,000 yen. Samejima paints a crane -- a symbol of happiness and long-term fidelity -- on a kimono. The ink has to be applied in quick strokes. (Courtesy of Tamayo Samejima)

Since returning to Japan, Samejima has been performing at sumi-e painting events, collaborating on apparel design with manufacturers such as Little Eagle and stores such as Isetan. She also teaches sumi-e, is an art writer and translator, and has held solo shows at UPLINK Gallery in Tokyo, Eonta Space in Jersey City, in the U.S., and Galerie Knoetzmann in Frankfurt, Germany.

As in her performances, Samejima paints freehand on the clothes she makes and uses a fixing solution with the sumi ink to ensure that the clothes are colorfast. Sumi ink is made from tree ashes and natural glues and is environmentally friendly, she notes.

"What fascinates me about sumi-e is that you must paint with ki (energy). You don't paint with just your hands but you need to move the core of your body and arms. I believe this is something that all Japanese traditional arts have in common," Samejima says.

"For example, in traditional Nihonbuyo (Japanese dance) it may look like the dancers are waving their hands gently, but in fact they are not moving their hands much at all but the core of their bodies," she explains. "By doing so, the energy of the space is moved."

As many time-honored crafts in Japan face extinction due to a lack of interest among young people, Samejima hopes to keep the flame of traditional arts alive through her work with sumi-e. "We have a responsibility to pass on Japanese culture to the next generation," she says.