Upcoming festival to turn Bangkok into heart of contemporary arts A total of 75 groups and individuals from 33 countries will showcase their artworks and performances in 20 locations across the capital.

Thailand has made itself a viable industrial economy in Southeast Asia. The event is expected to make the country dominant from a softer approach, too.

The list of sponsors of the 120 million baht ($3.67 million) project includes the country's tourism authority and Thai Beverage. Visitors can enjoy viewing the art largely for free, except for certain facilities that require admission fees.

A similar large-scale art event had been planned in 2014, but the plan collapsed due to financing difficulties and the country's political instability following the military coup that year. Choi Jeong Hwa displayed this sculpture at a past event. (Courtesy of the artist)

This time, the event is actually happening, with significant contributions by Apinan Poshyananda, the artistic director of the event.

Having worked for many years in the art world, in positions including permanent secretary of the country's Ministry of Culture and art professor at Chulalongkorn University in Bangkok, Apinan has a rich network among artists and related people worldwide. "I know them personally and I [was able to] invite them to Thailand," said Apinan. The presence of these eminent figures will be a unique attraction of the event.

Exhibitors include Marina Abramovic, a performance artist from former Yugoslavia. Works of Japanese artists, including avant-garde legend Yayoi Kusama and Yoshitomo Nara, best known as a painter of portraits of children, will be on show as well. 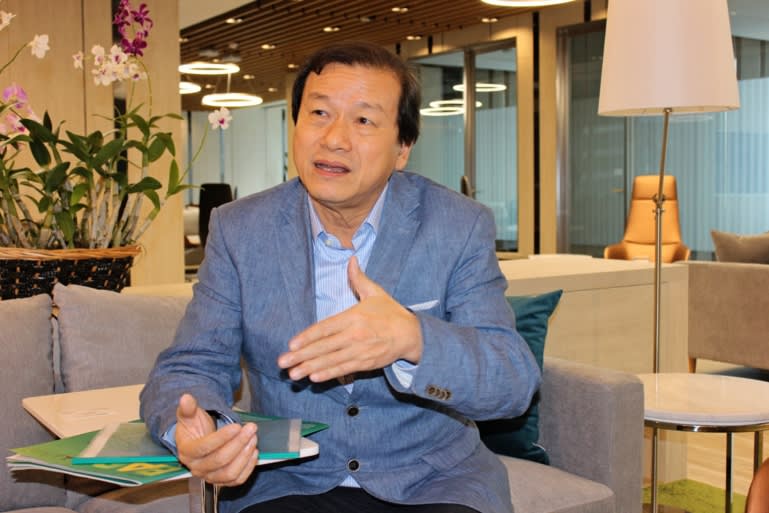 The Biennale also aims to provide a global stage for young Thai artists. They now have experience and know-how on presentation, and their English skills have improved, Apinan said. Their work includes images and sculptures, as well as video and other new artistic media.

Still, the art industry in Thailand is not especially strong. "People don't spend much money on art," Apinan said. "The number of galleries is increasing but we need more professional galleries. The private and public sectors support the art industry by holding art contests and events, but it is not enough."

Contemporary art in Thailand grew in the period of "ASEAN Tigers" in the first halft of 1990s. "The economy was good, and foreign countries such as Japan and Australia invested a lot in Thailand," Apinan recalled. "Young artists also got support from them."

The country's art and economy have grown together. "Thai people live in creative chaos, and that has cultivated a unique sensibility," the art director said.

It may be time for the art industry to advance to the next stage. Apinan aims to leverage the art festival to turn the Thai capital into a center of contemporary arts. He has selected lineups of artworks that can appeal even to people who are not familiar with art.

The event is expected to boost the country's tourism, too. The venues to showcase art and performances include the famous ancient temples of Wat Pho and Wat Arun, where visitors can enjoy a mixture of contemporary art and traditional architecture. In addition to art galleries and shopping malls, event sites also include unusual settings such as the Bank of Thailand building.

Overall, the event is expected to attract 5 million to 7 million visitors from home and abroad.

Hotels are also keen to be part of the event. The Thai Hotels Association, which includes more than 200 hotels across the country, is working with the event organizer to provide tours to visit exhibition spots scattered across the city.

Apinan foresees the event bringing economic benefit to the hotel, transport and entertainment industries, not only in the capital but also in nearby areas where visitors to the festival can stop by.

The Ministry of Tourism and Sports and the Tourism Authority of Thailand are helping advertising the event overseas, running promotional campaigns in China, Japan and the U.S. as well as other parts of Southeast Asia.

The organizer also plans to launch a smartphone app with QR codes that is designed to help foreign visitors individually hop around the various locations of the event.

"[The app] will also display a map of venues and transport, explanations of artists and their works, and also the history of the building used for the exhibition," Apinan said. During the event, extra buses and boats will be available to secure easy access to venues.