BANGKOK -- A woman is weaving in the old house that Thai silk built. On video screens suspended in the dark teakwood rooms of the renowned Jim Thompson House Museum, leotard-clad performance artist Kawita Vatanajyankur is using her body to mimic a knitting machine. With admirable grit and visible discomfort, she mechanically twists, rolls or contorts, like a badly oiled cog, to create reels of thick colored yarn.

Shot against bold, luminous backgrounds, Kawita's short films are arresting metaphors for the suffering of workers in our age of low-cost fast fashion, much of which is mass-produced in Southeast Asia's textile factories.

Displayed in the former home of the titular American silk magnate, alongside his first-rate collection of Buddha-inspired paintings, antique furnishings and ceramics, however, they also signal something else: a creative survival response by one of Bangkok's most august high-culture tourist attractions as it gradually emerges from the COVID-19 pandemic, a period which has seen visitor numbers tumble from peaks of 1,500 people per day in high season to around 80 today.

"The challenge the [Jim Thompson Foundation] board faced during the pandemic was: How to bring back local visitors who have already been?" explained Gridthiya Gaweewong, the long-serving artistic director of the Jim Thompson Art Center (JTAC), a nonprofit organization that has staged exhibitions, educational programs and events on the grounds since 2003.

One solution the board settled on involves hosting dialogues between this leafy, antique-filled compound and the contemporary art world -- dialogues they rarely permitted prior to the pandemic. "We're trying to use the new interpretations and fresh perspectives of a younger generation of artists to reactivate the house," she explained. "This is a new chapter for us." Art "interventions" are not the only development marking this new chapter. After a delay of several months, late November saw the grand opening of a long-awaited permanent home for the JTAC: a multipurpose cultural facility promising "diverse experiences of contemporary art" and encompassing two exhibition galleries, an auditorium, library, cafe and shop.

Architecturally, this bulky and boxy four-story building located on the same narrow side-street bears little relation to the original Jim Thompson House, although there are subtle references. Red bricks from Angthong Province add an endearing local accent that softens an otherwise imposing edifice of exposed concrete. Other elements, such as the overhangs and open-air walkways with porous metal meshing, provide the shade and ventilation commonly found in baan ruen Thai (traditional Thai houses) and vernacular tropical architecture.

From the second-floor courtyard, visitors can also peer across at the steeply slanted roofs and thick, luxuriant garden of the main museum compound. "We didn't want to give this project a Thai roof or any of that stuff because that's not the way we want to relate back to history," explained Malina Palasthira of Design Qua, a local architecture firm. "Instead, we wanted the new building to be rooted in place through the materials and also a visual connection." The expansive outdoor spaces also channel something of the spirit of the original house. "Another way we relate back is by wanting to be more outside than inside," she added. 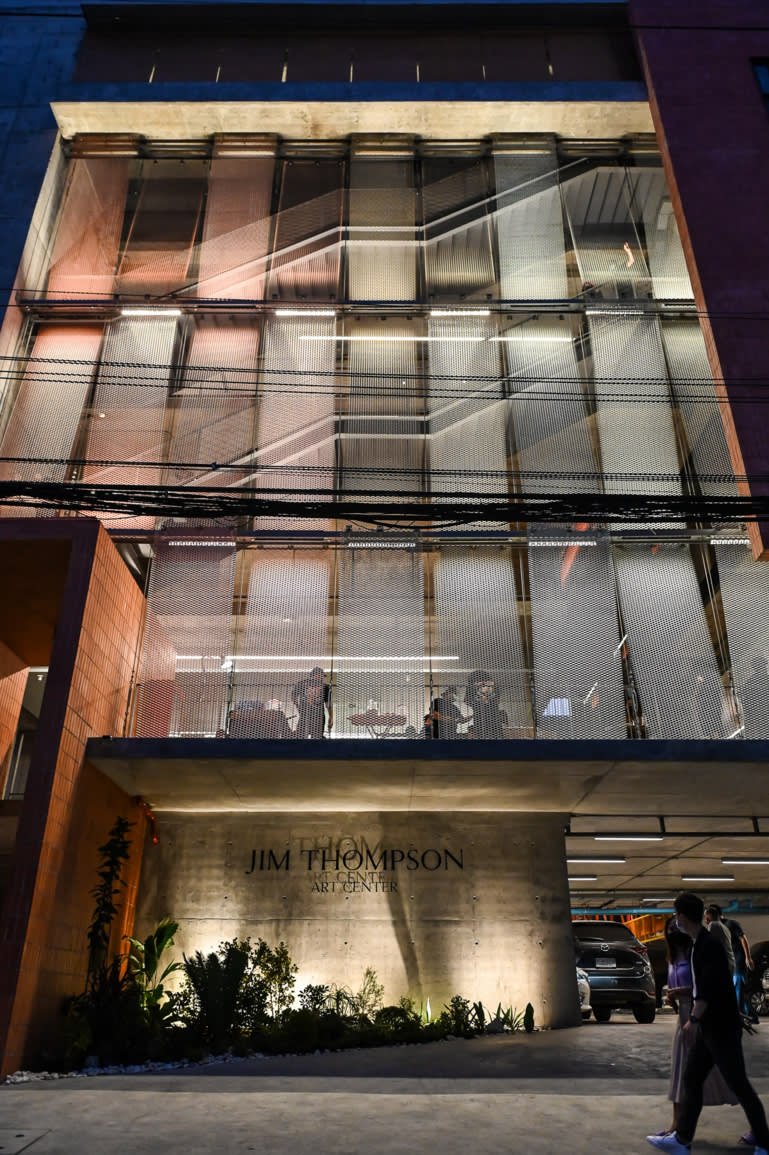 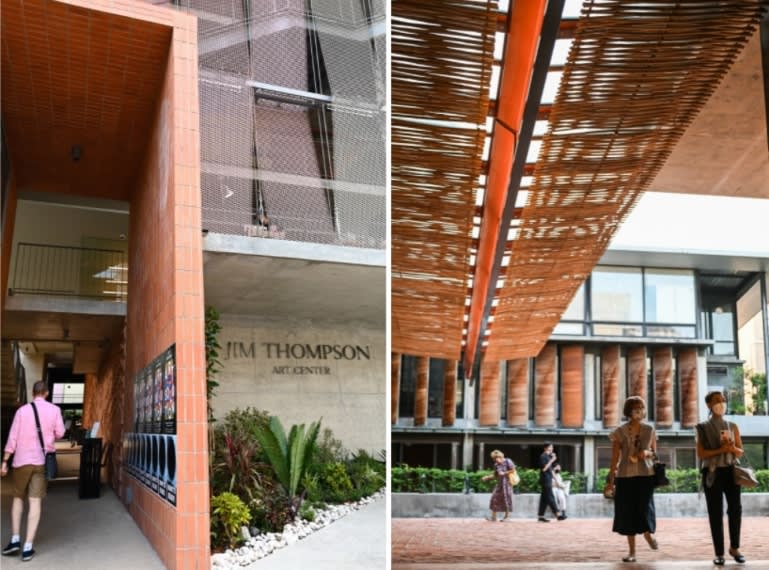 Set to bring this raw, functional building to life in coming months is an expanded creative vision. Since 2003, the center's free culture programming has supplemented the genteel main attraction: a complex of Thai teakwood houses that Thompson -- famous for both reviving Thailand's silk industry and for his unsolved 1967 disappearance in Malaysia's highlands -- erected on the banks of a canal near the Muslim silk weavers of the city's Ban Krua community and then adapted to accommodate his modern tastes and prized collection of Southeast Asian art.

The reasoning behind establishing the JTAC in the early 2000s was simple. Back then, less than 2% of those visiting the house and its peaceful, sun-dappled gardens lived in Thailand. "For Thai people, going to see old objects in an old house where an American lived and where tourists go wasn't exciting to them," recalled Eric Bunnag Booth, executive director of the Jim Thompson brand. "We wanted to make the foundation better known to locals, nonacademic everyday people, so we decided to have temporary exhibitions like most museums."

Initially the JTAC's exhibition roster oscillated between surveys of textiles or traditional arts and thoughtful showcases of craft-based or socially engaged contemporary art from Thailand or the rest of Southeast Asia. For example, the inaugural show, "Power Dressing," explored textiles, dress and regalia from the 19th-century royal courts of the northern Thai and Shan kingdoms. It was followed in 2004 by local artist Pinaree Santipak's "Temporary Insanity," for which the center's galleries were filled with her breast-shaped silk cushions, among other interactive soft sculptures. 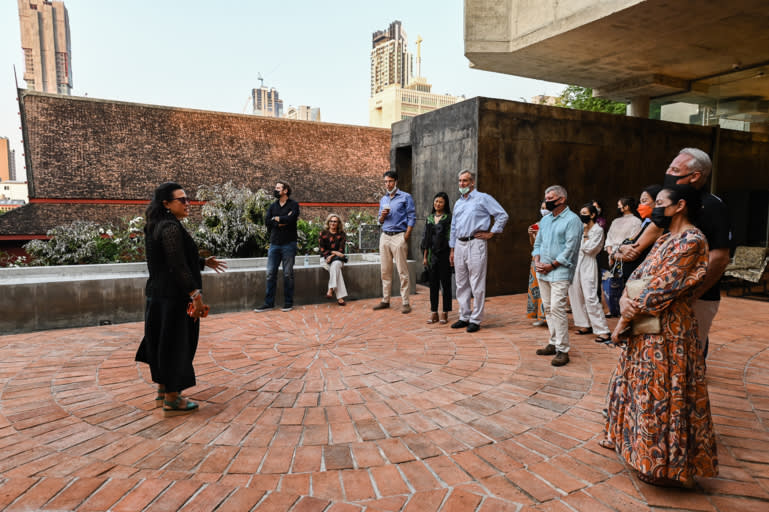 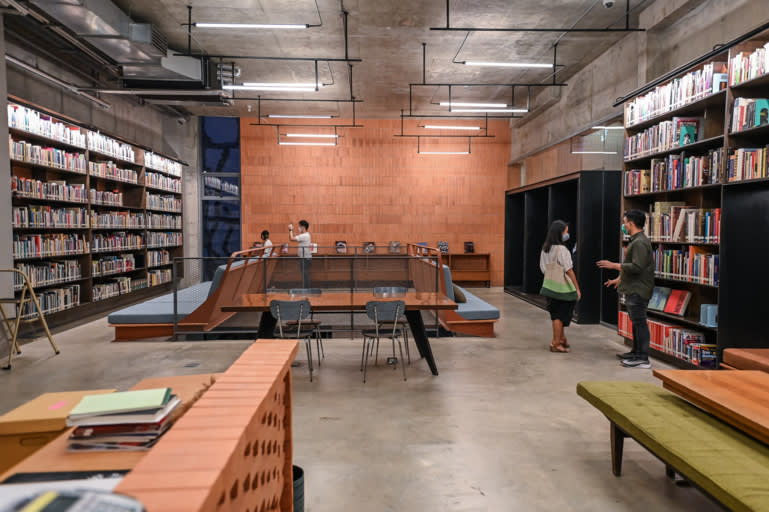 Top: Opening day visitors enjoy the center’s open-air courtyard, beyond which sit the steeply pitched roofs and lush gardens of the original Jim Thompson House Museum compound. Bottom: Facilities include the William Warren library, containing art reference books and an archive of documents relating to both the history of Jim Thompson the man and the silk company he founded. (Photos by John Clewley)

These sorts of dramatic contrasts -- ceremonial Tai tribe textiles followed by Christian Lacroix's haute couture, cotton maps from early Bangkok and then community-based performance art -- continued for several years. But gradually the center transitioned away from exploring the ethnography of textiles to "embracing the world in which textiles live within."

Before the original gallery space above the compound's Thai silk apparel store, revenues from which finance the center, closed in 2018, the JTAC was a bastion of contemporary art. Solo projects by renowned local artists such as Apichatpong Weerasethakul and Arin Rungjang regularly alternated with group exhibitions focusing on emerging artists and regional perspectives. Many of these shows explored topical sociopolitical issues through a broad range of artistic mediums and methods -- and, in doing so, were arguably more reflective of Gridthiya and Booth's tastes (she is one of Thailand's foremost curators of contemporary art; he one of Thailand's most avid art patrons) than Thompson's passions.

"Future Tense," the inaugural show running until the end of February, feels like both a continuation of this legacy and a departure: While comprised of socially engaged artworks, it lacks the regional focus of previous exhibits. Arranged across the new center's two white-cube galleries are 14 pieces that attempt to "unearth the impact of the Cold War on the critical issue of disrupted contemporary realities," and created by artists from Bosnia, Mexico, Germany and Colombia as well as those closer to home. Prominent works include Elmedin Zunic's "Inverted Memoirs," a blackboard scrawled with words and diagrams alluding to traumatic collective histories. Another is Wolfgang Bellwinkel's photo series of scarred natural landscapes redolent of ecological and social crises. There are also contributions from a handful of local emerging artists, such as Vacharanont Sinvaravatn's somber landscape paintings of rural Nakhon Pathom Province, each one touched by modern industrial development.

The break with the long-standing focus on regional art and artists is deliberate, said Gridthiya. "We wanted to connect with the Global South, especially parts of Africa and Latin America. You will see more of this. We also want Thai people, especially the younger generation, to see and understand that everyone around the world has been affected by the remnants of the Cold War at some point."

Thematically, "Future Tense" hinges on the geopolitical backdrop that frames Thompson's story. Before he was dubbed the "Silk King" by the Western media, he was an agent of America's Office of Strategic Services (the forerunner of the CIA) during World War II. This dialogue with the past -- oblique and understated though it may be -- also sets the tone for what is to come. "All exhibitions going forward will have a connection to the man, the era that he lived in, or to the house," Booth stressed. 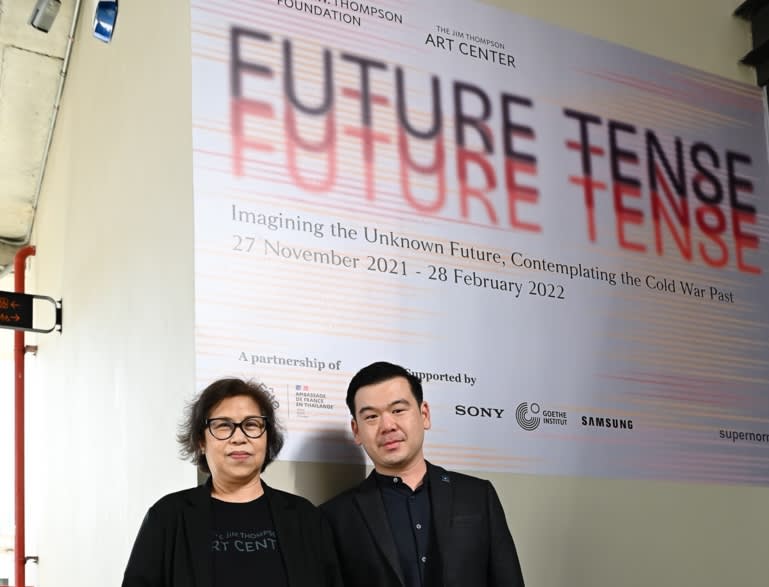 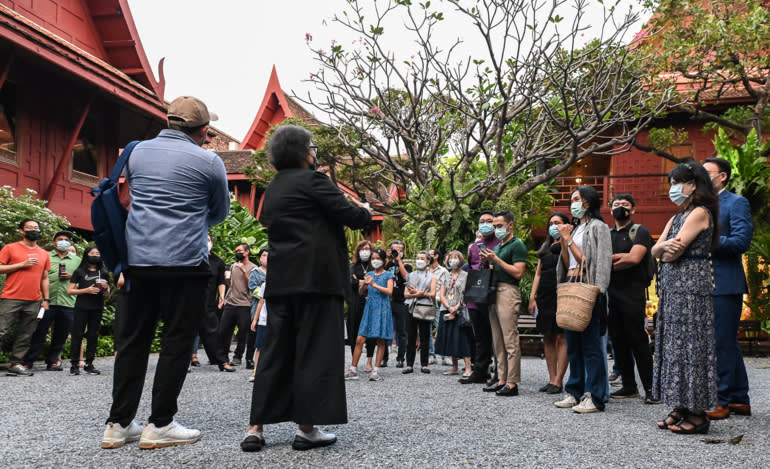 Some of these connections will be more obvious than others. Scheduled for next June is an archival show entitled "News from Yesteryear." This will "bring a fresh and lively perspective to information already published in biographies," according to senior conservator Bruno Lemercier, through a close examination of the foundation's official and private documents, including records from the early years of Thompson's Thai Silk Company.

A reconfigured tour of the main house that ends with a new permanent exhibition about Thompson will also be introduced this year. "Most people who visit the house always ask about the man, but we have little information," Booth explained. "There's nowhere you can spend some time reading about him, the company, what he did and why he did it. So that will be the last part of the tour." Visitors will then exit the grounds via an expanded retail space that will help cover the operating costs of the art center.

Back in this monolithic building, the budget constraints facing the James H. W. Thompson Foundation -- the umbrella organization operating both institutions -- are plainly apparent. Most of the outdoor areas set aside for trees and plants, for example, are currently bare. A 50 baht ($1.48) entrance fee (covered by the admission fee to the main house), annual memberships and fundraising galas have also been introduced. Left: Mounted on the second floor of the Jim Thompson House Museum, Kawita Vatanajyankur’s "Knit" is one of five hyper-colorful video works channeling the physical hardships of textile industry workers. (Photo by John Clewley) Right: Also on display at the museum is a series of small bronze sculptures by local artist Dusadee Huntrakul. His project, "A Trail at the End of the World," was directly inspired by the museum’s art collection and architecture, as well as Thompson’s still unsolved 1967 disappearance. (Courtesy of Jim Thompson House Museum)

Ambitions, however, appear undimmed. Screenings, tours and events all drawing on the Cold War theme are planned. Alongside new exhibitions, Gridthiya and her team are also working on several long-term developments to boost inclusivity and make the center both more rooted to its local context and more robust. These efforts include a collaboration with Chulalongkorn University on creating Thailand's first master's degree in curatorial practice and building new community alliances. Meanwhile, the JTAC's first "open call" for exhibition proposals, which was held in mid-2021 and saw a committee select projects for the next two years, is set to become a regular fixture. "In the past, it was too exclusive," she said. "We want to engage with more artists and curators."

For now, however, the new building and presence of contemporary art in the old compound is the main focus. The latter was, according to Booth, approved by a recently appointed board of new trustees comprised of practitioners in architecture, tourism and art -- a stark contrast with previous boards consisting of academics and historians. "Now the board is more open to suggestions," he said. "It's not just about running the place beautifully. It's about how to keep it going for future generations and do more things."