Philip Cornwel-Smith says his latest book "is not a guide to places and things. It's more of a guide to why Bangkok is the way it is, and how it became like that."  (Nikkei montage/Cover design by Xavier Comas of Cover Kitchen; portrait photo by Cedric Arnold)
TOM VATER, Contributing writerAugust 22, 2021 08:00 JST | Thailand
CopyCopied

BANGKOK -- The British author and cultural chronicler Philip Cornwel-Smith has called Bangkok his home for a quarter century, and his book "Very Thai," published in 2005, has become the standard go-to work for inquiries on all aspects of popular Thai culture. Now, his follow-up "Very Bangkok," a 350-page ode of love to the city published just before COVID-19 made international travel impossible, has become the face of Thailand in a just-opened international exhibition devoted to global cities.

In sections entitled "Senses," "Heart" and "Face," Cornwel-Smith's new book explores and explains myriad urban tales, myths, facts and contradictions that make up the personality of the Thai capital, accompanied by the author's vivid color photographs. No foreign or Thai writer has published a book that comes close to providing as erudite and intimate a portrait of the capital.

"'Very Bangkok' is a rolling snapshot in time of the period I've been witnessing. The book is not a guide to places and things. It's more of a guide to why Bangkok is the way it is, and how it became like that," Cornwel-Smith says.

In 2019, Bangkok was the most-visited city in the world, known for its temples, canals, palaces, local communities, street food, shopping, nightlife and freewheeling, relaxed ambience. That ambience has been somewhat tarnished in recent years, amid profound changes in the Thai capital. Concrete canyons lined by swish megamalls and high-rise hotels are replacing wooden house communities and narrow alleys, while living conditions for the vulnerable have not improved.

Since the country's most recent military coup in 2014, the Thai government has done its best to stifle positive change -- refusing to deal with chronic pollution and closing down the world's most vibrant street food culture while responding to challenges with censorship, violence and imprisonment. The condition of Thailand was bluntly summed up in July by Thailand's foremost movie director, Apichatpong Weerasethakul, as he accepted the prestigious Jury Prize in Cannes for his new film "Memoria," starring Tilda Swinton. "I am lucky to be standing here, while many of my countrymen cannot travel," the director said. "Many of them suffer greatly from the pandemic, with the mismanagement of resources, health care and vaccine accessibility."

Despite rapid modernization, incompetent governance and official intolerance of alternative views, however, Thailand's capital remains a many-layered beast of a metropolis where one can travel from a historic, timeless canal community to an international art biennale in minutes.

"'Very Bangkok' is a book about urbanism, and I approached Bangkok using the senses as a way to reading cities," says Cornwel-Smith. "Through the senses, you can get a different feeling about a city's character that is not so dependent on how something looks.

"In the West we are biased to how something looks, then sounds. Other senses are much less important. In Thailand, scent is emphasized, balance and direction carry more social weight than in the West -- there are so many ways in which Thais are taught to move with grace; they're told to walk softly, for example, while [Westerners] don't think about it." Top: In a local festival, a bicycle is decorated with garlands to evoke the equestrian statue of King Taksin. Bottom: Citizens in folk costume conform to rigid lines in the "Thainess Festival." (Photos by Philip Cornwel-Smith)

Cornwel-Smith traces Thailand's unique social quirks and traditions back in time. "I am looking at the long-term aspects of the culture, at the reasons why Thais make certain choices or act in certain ways, why they build and create things in a certain character," he says. "A lot of today's behavior comes from court life in Bangkok. Courtly etiquette developed here in the 19th century. That then morphed to Bangkokians telling farmers to walk like a poo dee, a member of the upper classes."

For now, thanks to the pandemic, foreign visitors continue to be discouraged by bureaucratic and financial hurdles, but Cornwel-Smith's "Very Bangkok" has itself gone on tour to Italy, where it is the subject of the Bangkok Pavilion at Countless Cities, one of the first international art festivals to open since the pandemic hit.

The festival, officially the Second International Biennale of Cities, has just opened in Favara, Sicily, and runs until mid-January 2022. "Favara was a classic Sicilian town with a declining population and fading industries; Favara was disappearing," says Cornwel-Smith.

"But in 2010, an enterprising citizen, Andrea Bartoli, asked himself what to do to reverse the downhill trend and he came up with a fantastic idea -- let's turn the entire old town center into an arts space, with multiple venues to visit." Bartoli bought several buildings, restored them under the name Farm Cultural Park, and brought international artists to the town, which has one of the highest unemployment rates in Italy. 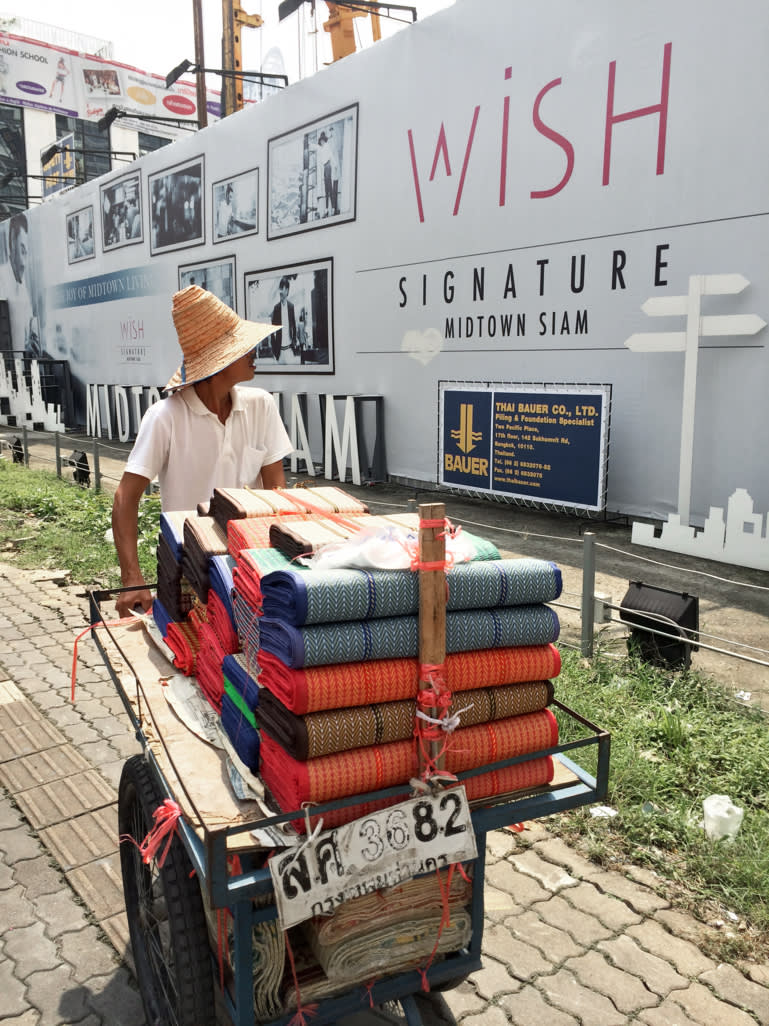 The initiative proved to be a huge success. Favara has received millions of visitors and in 2019 held its first biennale of the cities with a focus on Africa. This year's theme is People Live Here, exploring ways toward a more humane approach to urban life.

People Live Here is divided into three ideas: Housing Diversity, an exploration of individual and group living for people with different means and in different stages of their lives; Good Business, a look at the informal economy and manual professions, and Parkyfying the Future, which explores relationships between people and plants and the regreening of cities.

"The curators loved 'Very Bangkok,' because they saw the connection to making business in adversity, focusing around a vendor cart," says Cornwel-Smith. "It's this informal economy and ambience that foreign visitors cherish most about Bangkok." 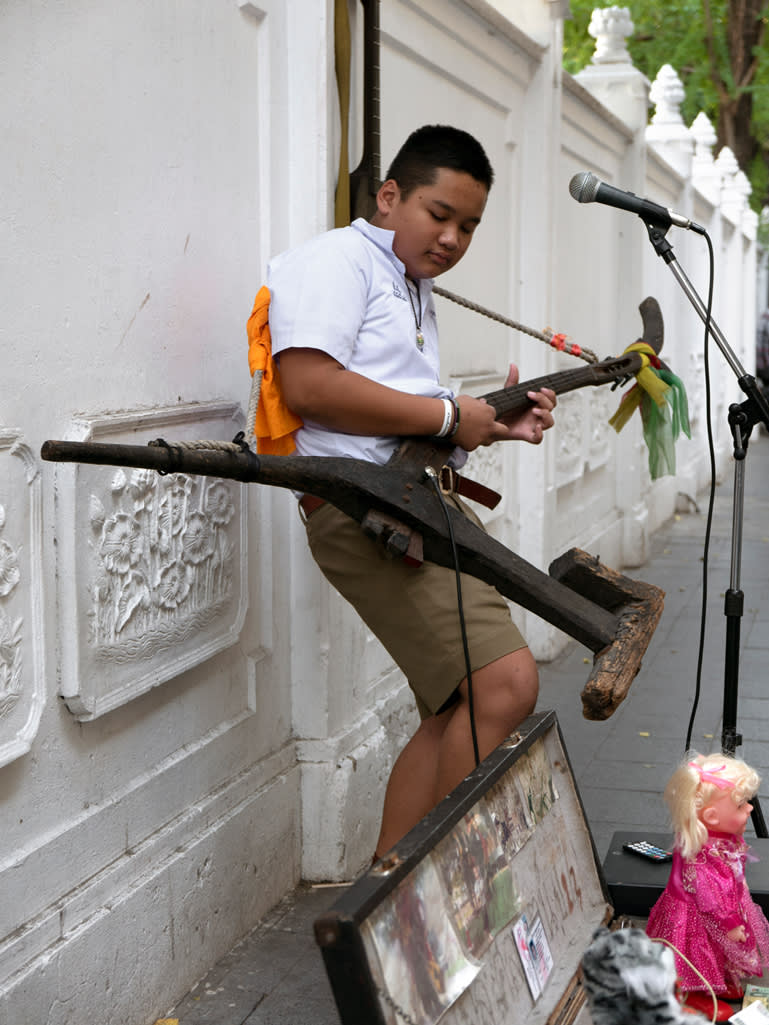 Thailand is also making a splash at La Biennale di Venezia, the 17th International Architecture Exhibition in Venice -- a grander affair with a larger budget which runs from May 22 to Nov. 21. The Thai pavilion is a representation of a tribal house of the Kuy ethnic minority from Surin Province, curated by Apiradee Kasemsook and designed by Boonserm Premtada of Bangkok Project Studio.

"There are two very different approaches at work here," Cornwel-Smith says. "The conservative pavilion in Venice is nostalgic and didactic. The one in Favara relates to people today and the ambiguous way they operate in cities, not just the buildings."

Cornwel-Smith says the representation of Thailand in Venice "reflects the top-down notion of ideal Thainess. But Thainess is really an aspect of Bangkokness. Bangkok acts as if it is the entire country, the entire culture. The city dictates terms and styles, attempts to standardize Thai food, dominates everything. But it's not just the power holders who have the status and right to dictate. This behavior can also be detected in peoples' attitudes." The Thai capital, he says, dominates the rest of the country more completely than any other capital city does in its respective country. "Almost everything one can think of is headquartered here. Perhaps in other countries, religious, educational or military institutions are located in other places," he says. "In Thailand, everything is close to hub Bangkok."

Cornwel-Smith says he is planning to travel to Italy to see the "Very Bangkok" pavilion at first hand. "It's located in a huge 300-year-old rambling palazzo, a bohemian experimental space that holds visitors for a long time," he adds. "People spend hours in there. Most of the installations contain messages that visitors have to seek out.

"In the Thai pavilion, Andrea Bartoli and the co-curator Alice Acquaviva decided not to put photographs from the book along a wall, but to arrange them on a food vendor's cart, like a menu, and on postcards to take away. A QR code links you to the stories behind the displayed images on the website verybangkok.co. These human vignettes offer a feel for the predicament of and threat to the informal culture in the Thai capital."