Tokyo has 6,094 public parks –Yoyogi among them – providing plenty of room to enjoy the city at its best. (Photo by Kohei Take)   © Kohei Take
Life & Arts

Asia's best cities to live in

Monocle’s ranking of the top places in Asia

Cities are the future. By 2030 urban areas are projected to house 60% of the global population. While city halls need to prepare for that future, they need to offer residents a decent quality of life in the present. The best cities manage to find a healthy balance between planning for tomorrow and managing today.

That's why we assess how different Asian cities are doing in this selection from Monocle’s annual world cities survey, now in its 12th year.

How the survey works

Monocle assessed more than 60 metrics spanning everything from the serious (how many kilometers of cycle lanes are there?) to the fun – what will a good glass of wine cost you?

Some metrics are subjective and put to rigorous debate. All the research has been done by Monocle’s team of editors, correspondents and researchers using publicly available data and requests from city hall. All statistics are for 2017 unless otherwise stated. 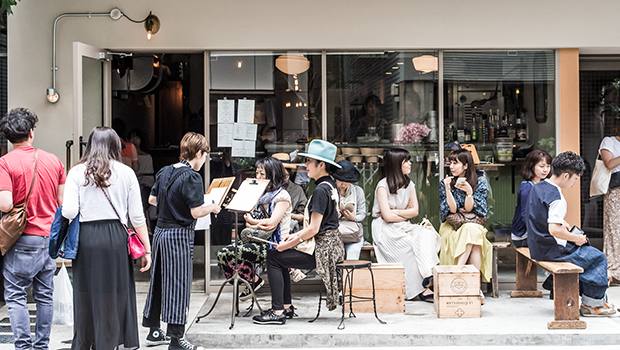 For all its concrete density, at heart Tokyo is a sprawling network of low-rise neighborhoods with tight communities and long histories.

Young children walk to school unaccompanied, residents keep the streets clean and most know who their neighbors are. The safety of Tokyo’s streets is often taken for granted but a quick look at the crime statistics of just about any other big city in the world (outside Japan) is a reminder of how precious and rare this sense of security is.

The benefits of that security include an exceptionally safe and punctual transport system, a thriving late-night drinking and dining scene and a general civility in even the smallest interaction. It’s not difficult to find an excellent meal at 10 p.m. or a quality bar where an expertly prepared cocktail awaits. Insomniacs can while away sleepless hours in Daikanyama Tsutaya, a bookshop – with a lounge bar – that opens until the wee hours and positively encourages leisurely browsing.

Tokyo is, as ever, in flux. The impact of the speedy increase in tourism is now being felt as cranes loom and ambitious projects transform chunks of the cityscape, propelled by the upcoming Tokyo Olympics. The government is looking for 40 million visitors by 2020, a tenfold increase in just 20 years. Residential neighborhoods previously ignored by tourists are now rife with wheelie suitcases and a revolving door of short-stay visitors.

The community ecosystem that has made Tokyo such an exception to the urban norm is still in place but it needs to be safeguarded. In a globally connected world, Tokyo is a reminder that real life is lived in the streets, schools and shops that make up a neighborhood. Melbourne’s future is looking sunny thanks to an infusion of cash that ensures the city will be able to accommodate all the new residents rushing in to enjoy its famously laid-back lifestyle. The state of Victoria just received nearly a third of the A$24.5 billion (16 billion euros) federal infrastructure budget for the year – its largest share of the pie in decades – to help alleviate congestion on Melbourne’s roads, trams and trains. That includes A$5 billion (3.3 billion euros) to build a long-delayed rail link between the city and Tullamarine airport.

While housing affordability has been a major cause for concern, the city has retained its enviable liveability thanks to its top-notch health care and education systems, ample green space and diverse cultural and culinary scenes. It also helps that Melbourne is decidedly unfussy. Dogs are welcome in cafes, bottles of wine can be cracked open in parks and bars don’t have closing times, contributing to a vibrant night-time economy. Sydneysiders hold their work-life balance sacrosanct. The city is one of the best for surfing and its cliff-top paths and picture-perfect ocean baths offer plenty of entertainment for the outdoorsy. Mountains and a world-class wine region are just a couple of hours away.

Sydney’s population is growing at a record clip, which has turned housing into some of the world’s most expensive and jammed the roads. 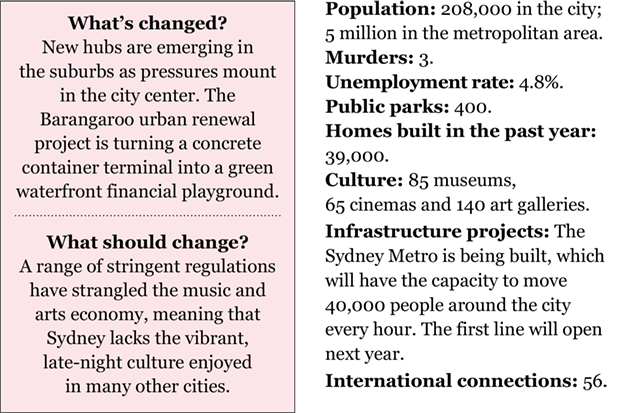 Last year Hong Kong marked its 20th anniversary as a special administrative region of China. Crime is at its lowest since 1975 and retail and tourism are firing on all cylinders.

The city’s emergence as a cultural hub continues apace. Two landmark arts complexes have opened this year: one a skyscraper called H Queen’s that houses galleries David Zwirner and Hauser & Wirth; the other, Tai Kwun, is a sprawling former police station given a makeover by architecture firm Herzog & de Meuron. 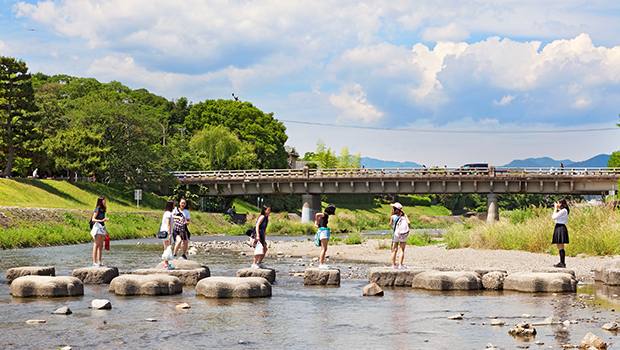 It’s hard not to fall for Kyoto. It is Japan’s ancient capital and the keeper of its rich architectural and culinary heritage. The city’s leaders are vocal promoters of walking and public transport and work hard to protect Kyoto’s traditional beauty with strict rules on signs and outdoor advertisements.

What the city lacks in big public parks it makes up for with generous spending on the upkeep of footpaths and picnicking areas along the banks of the Kamo and Takano rivers. City hall is also working to further reduce the amount of food that is thrown out every year, rallying residents, restaurants and hotels to do their part.

Kyoto could do with investing in a speedy connection to cities abroad as it doesn’t have its own international airport: Kansai International is a 90-minute drive; Osaka International Airport is an hour. In spite of this, the city is attracting a record number of tourists, which is keeping the economy buoyant. 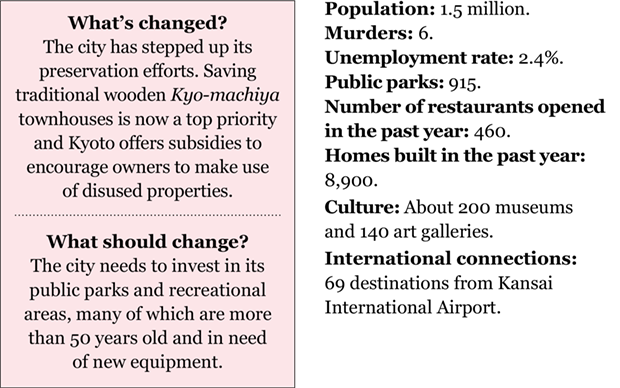 Singapore’s heavy-handed government might be accused of having planned, built and governed the city too well. Its prim overseers have installed manicured blocks of flats along verdant streets and a futuristic business district that, while technically sleek, is, well, a little boring. With great infrastructure in place, Singapore’s now able to turn its focus toward improving the softer elements of what makes it a great place to live. This is an enviable strength when compared to other cities lacking the same transport networks or business environment.

There’s also been strong growth within its cultural scene, which hit a record number of free arts and cultural events in recent years. And as one of the safest cities in the world, Singaporeans feel secure roaming its streets and numerous parks. What’s next? Here’s hoping for a creative sector that inspires more innovation within the waning retail scene.

Fukuoka has what many Japanese cities can only hope for: sunny climate, bicycle-friendly streets, a lively port, nearby beaches and an exceptional dining scene. It’s not surprising that this midsize city of 1.5 million is the fastest-growing Japanese metropolis outside the capital.

Led by its enterprising mayor, Soichiro Takashima, Fukuoka is investing in its own high-tech future with programs that make it easy for startups and entrepreneurs to set up shop and test new ideas. The city is a front-runner in reducing its carbon emissions, opening a new paper-recycling plant and doling out subsidies to homeowners who install solar panels.

Housing affordability is still Auckland’s main hurdle but a policy focused on building more homes is expected to ease a little of the burden. Also promising is a recently announced NZ$28 billion (16.8 billion euros) transport plan, which will see a light-rail system built, an upgrade to public buses and new cycle lanes created over the next decade.

Meanwhile, Auckland’s residents are afforded the benefits that come with having myriad pretty landscapes on your doorstep: from the picturesque harbor, pristine beaches, volcanic landscape and thriving wine regions. The city center also offers a thriving restaurant scene, multiple fine arts institutions and plenty of business opportunities. One area that’s particularly ripe for opportunity is the hotel sector: As tourism in the country continues to boom, more smart options are desperately needed.

Though rising, Brisbane’s housing costs are still cheaper than Sydney’s and Melbourne’s. It’s a steal considering you get the same pleasant Australian subtropical climate and proximity to nature, in addition to safe and family friendly surroundings. What’s not a bargain are Brisbane’s high transport costs for a less-than-stellar public network.

An expected rise in international arrivals is now supported by an A$135 million (84 million euros) expansion of its international airport and with the completion of a new runway in 2020 it will have more capacity than any other city airport in Australia.

This report is based on the global top 25 cities survey which first appeared in Monocle magazine. To find out more about the magazine and to subscribe, visit monocle.com.