BOOKS: What Beijing gets right 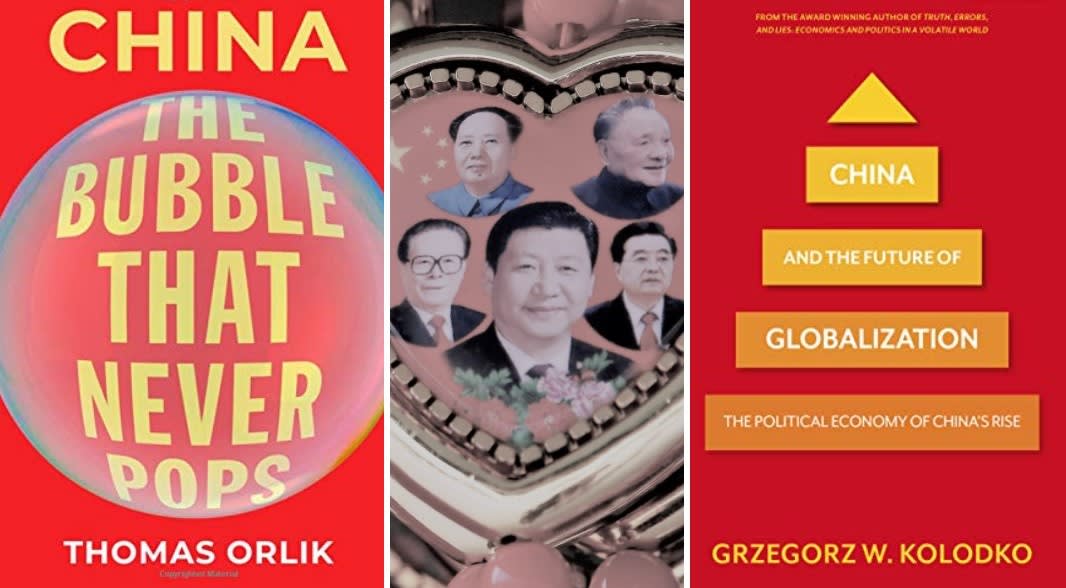 As a consensus develops that China is the main strategic competitor to the United States and poses a paramount security threat to the West, a realistic understanding of China's political economy is more important than ever. Over the past four decades, Western policymakers and analysts have been more often wrong than right in their forecasts about China.

A cottage industry of books has warned of a coming showdown or second Cold War with China. As U.S. President Joe Biden considers how to formulate a more nuanced China policy to replace the failed strategy of his predecessor, President Donald Trump, two recent books provide well-informed insights into China's political economy: Thomas Orlik's "The Bubble That Never Pops," and Grzegorz W. Kolodko's "China and the Future of Globalization: The Political Economy of China's Rise."

Orlik was formerly based as a journalist in Beijing and is now chief economist for Bloomberg, while Kolodko is a former Polish finance minister and respected economist. Both focus on economic issues and credit the pragmatic competence of the Chinese government for the country's economic miracle.

Orlik begins his book by describing a dramatic conference in 2017, in which Chinese President Xi Jinping lectured his policymakers on the imperative need to preserve financial stability. Xi asserted that China's debt burden was unsustainable and demanded that China's excessive leverage be brought under control without upsetting social stability.

Orlik chronicles how China's hypergrowth led to excesses and the unsustainable buildup of debt. He catalogs the various crises and follies that accompanied China's boom, including the Asian financial crisis of 1997, "ghost cities," stock market crashes, and the drying up of export markets in the wake of the Western financial crisis of 2008. A "hard landing" of China's economy appeared inevitable to the "China Bears." China's economy had become a giant bubble, waiting to pop in an implosion of bad debt and abandoned projects. Chinese President Xi Jinping makes a toast at the Belt and Road Forum in Beijing in May 2017. That year, alarmed by what he saw as an unsustainable debt burden, Xi called on his policymakers to bring China’s excessive leverage under control without upsetting social stability.   © Reuters

But the bubble did not pop. Orlik describes how China has met each challenge: "A ghost town that turned into a thriving business hub, a runaway banking system brought to heel, and zombie firms that lurched back to life, all with the economy clocking steady growth." In 2015, such successes would have seemed a "Goldilocks scenario ... beyond the imagination of the bears."

Conventional Western wisdom assumed that the deleveraging of China would be painful. Yet, China stabilized its debt-to-gross domestic product ratio and restrained shadow banking while maintaining strong growth. He attributes this success to "a combination of the underlying resilience of the economy and financial system, the underappreciated ingenuity of policymakers, and the unusual resources of an authoritarian state." Soon Xi's team was showing results in controlling leverage.

Perhaps the most interesting part of Orlik's book describes how, in its Made in China 2025 program, the country aims to conduct the "Fourth Industrial Revolution" -- the application of cloud computing, robotics, artificial intelligence and big data to overhaul its industries. He asserts that the Chinese government has focused more intensely on building a cutting-edge industrial sector than any other government. Orlik believes that China's post-2025 economy may use capital, labor and energy less intensively, be more environmentally sustainable, and remain a formidable competitor to Western manufacturing. Orlik may be right. China's authoritarian powers and competent economic management could well ensure that its economy continues to grow robustly. The sort of clumsy trade measures that the Trump team put in place will be of little avail in restraining China.

One of the author's key points is that the "China Bear" scenarios have been wrong principally because they failed to recognize the strengths of a Leninist one-party state. Confronted by a crisis, China can "shift policy decisively, comprehensively, and without regard to procedural or legal niceties." Perhaps more importantly, Orlik commends the government for solving problems creatively and seeking pragmatic "middle path" solutions.

Orlik cites China's deft handling of real estate bubbles and the partial opening of capital accounts without precipitating a collapse of either housing prices or the exchange rate. As a result, China has not gone through anything like the Japanese economic meltdown, the U.S. subprime crisis, or the 1997 financial crises in South Korea and Thailand. Since this is a book about the economy, Orlik does not mention the dire environmental problems, the suppression of civil liberties or any of the other shortcomings that critics legitimately raise about China.

Kolodko shares Orlik's endorsement of China's ability to manage challenges. But where Orlik restricts his narrative to the China story, Kolodko's concerns are global: What does China's successful development strategy imply for globalization and the geostrategic shaping of the world? He sees three interrelated problems that the world must address: demographic imbalances, environmental collapse and economic inequality. He asserts that solving these problems "is the sine qua non of civilization's survival," arguing that the West has failed to cope with 21st century challenges because of its neoliberal reliance on markets to solve problems. Contrasting China's success with shortcomings in the U.S., Kolodko credits China with becoming "an economic superpower by not letting capital take control. The power remains in the hands of the state." Alibaba founder Jack Ma enjoyed rock star status in the business world, but the leadership in Beijing quickly reined him in last year when it felt that he had stepped out of line.   © Reuters

Like Orlik, Kolodko attributes China's success to its innovative pairing of a free market economy with a high degree of state intervention -- which he says can be called either "market socialism" or "state capitalism." He says U.S. policy demanding government divestment of holdings in private companies is an attempt to force China to make "general public interests subordinate to those of private capital." In China, it is axiomatic that the reverse should prevail. He sees the greatest threat to the West as coming not from China but from the Western "myth" of the perfect free market.

In Kolodko's view, neither Western market capitalism nor Chinese state capitalism will triumph, nor will either lose. Instead, the future world will be heterogeneous, in which "the two megasystems of values, institutions and policies interpenetrate, and ... mutually reinforce each other." He argues for casting aside the fetters of outdated Cold War ideology and instead striving for pragmatic shaping of an economic system that works more efficiently.

Kolodko makes a good point. As the U.S. struggles with the hangover of four decades of neoliberal policy, China's success argues well for the effectiveness of its pragmatic direction of market forces to achieve social goals. Perhaps, Kolodko suggests, China can transmit to the rest of the world "its capacity for collective actions, for community behaviors, without which humanity will not manage itself." Critics should see competition between the two systems as an opportunity, not a threat. Ushers throw their hats in the air in Beijing's Tiananmen Square before the closing session of the 19th National Congress of the Chinese Communist Party in October 2017. Kolodko suggests the world can learn from China's strengths, such as its capacity for collective actions.   © Reuters

Both Orlik and Kolodko -- the former by implication and the latter explicitly -- lead to the conclusion that China's successful development of a largely market economy with strong state guidance offers lessons for the West. In the context of the American devotion to the free market, however, Kolodko's view may appear Pollyannaish. Given its entirely different historical trajectory and culture, is it realistic to expect the U.S. to move toward more activist state involvement in the economy? Perhaps Europe, with its different traditions, would be more sympathetic to a stronger role for the state.

Over the past 40 years, Western forecasts about China have proven wide of the mark. Although China voraciously adopted ideas and technology from the West, it did not become a neoliberal market capitalist democracy as had been hoped by the West -- nor did it collapse under the weight of the excesses engendered by its own success, as so many pundits predicted.

Now, overwrought Western predictions of a "Thucydides Trap," the tension that arises when an emerging power challenges an established power, that could lead a second Cold War, may also be wrong -- unless the fevered atmosphere created by these very forecasts make conflict between the U.S. and China a self-fulfilling prophecy. Could wise statesmanship on both sides find a path for the two superpowers to coexist? Could wise statesmanship on both sides find a path for the two superpowers to coexist?   © Reuters

A new China policy combining confrontation, competition and cooperation is required. Confront where core Western interests are at stake, compete so as not to be outplayed by China, and cooperate where China and the West share a common interest in combating environmental suicide and other global threats.

This existential environmental threat to both countries and to the entire world should be the most important underpinning of U.S.-China relations going forward. Fortunately, indications are that the Biden administration will infuse American foreign policy with a climate change agenda. But obsession with the "China threat" should not blind policymakers to the interests that China and the U.S. have in common. America must not succumb to anti-China hysteria. Fresh thinking is needed to avoid the sort of bellicose drumbeat that preceded World War I.

The focus of the two authors is limited to the present and recent past. Neither Orlik nor Kolodko provide historical or cultural contexts explaining how China's market capitalist system came into being. Was the system created over the past half-century, or does it have roots in Chinese cultural values over the millennia? Answers to this question would suggest whether the present system is sustainable and deeply grounded in Chinese soil, or is a fragile and adventitious construct without staying power.

Aside from that caveat, these two books provide excellent material for developing a more nuanced approach to dealing with the reality of China in the future.

James Stent, a retired banker based in Bangkok and Beijing, is author of "China's Banking Transformation: The Untold Story" (2017).