TOKYO -- Confectioners in Japan are shaking up Western teatime traditions.

Bavarian cream, Mont Blanc and cream puffs are among the old favorites getting revamps. Some of the new creations come in unusual shapes. Others look conventional but offer surprises for the taste buds. Hana no Babaroa havaro specializes in Bavarian cream, also called Bavarois, made with edible flowers. This type of dessert often comes in the shape of a dome. On May 1, the Tokyo shop began selling a new cube-shaped product called Petale. It has a square cream base, topped with a layer of jelly that encases a flower.

The shop hopes the vivid colors and floral motif will attract customers. A box of eight costs 1,800 yen ($14.41) plus tax.

The cream puffs are available only at select Dalloyau boutiques, but the chain sells nearly 1,000 pieces a day.

"When I bring Le chou Cubique as a gift, it draws a lot of attention because it doesn't look like a cream puff at first glance," one customer said. "It tastes good and helps start a conversation."

Shinichi Murata, Dalloyau Japon's marketing chief, said, "Le chou Cubique has many repeat customers, as it fits in a box nicely and is easy to carry around. That's one of the reasons for its popularity." Lately, the company has been getting more business from foreign tourists.

Yet another cubic dessert is Asrapport Dining's chiffon cake. It resembles a loaf of bread, but cut it crosswise and you will find cream at the center. The cake sells for about 1,000 yen at the company's six Gokoku sweets shops in Osaka. The company has found that the bulky look appeals to customers. In May, Asrapport started setting up temporary stalls at train stations and department stores in the Tokyo area.

Restaurant Manoir, serving French food in Tokyo, in September 2013 started serving a globe-shaped Mont Blanc for dessert. It is available to customers who order lunch or dinner courses, and only in autumn. "I want guests to experience surprise and joy," owner Tsuyoshi Nakamura said.

First, a dacquoise in the shape of one hemisphere is hollowed out and filled with chocolate, chestnut mousse and a candied chestnut. Another hemisphere, made of cacao-flavored chestnut meringue, is decorated with whipped and chestnut cream. Finally, the two parts are put together to complete the globe. 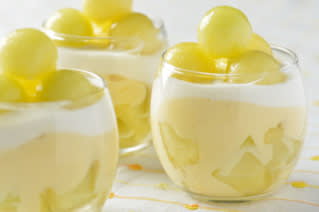 "We make this dessert after we get an order," Nakamura said. "We cannot prepare it beforehand because the base will become moist. Some of our guests come mainly for the Mont Blanc."

Cake in a glass

Pastry Boutique at the Park Hyatt Tokyo hotel last July started selling melon shortcake in a round glass. Sous chef Makoto Onozawa hatched the idea to express the freshness of the fruit used in the recipe. The 680 yen cake, initially intended to be a limited-time product, is now available throughout the year. 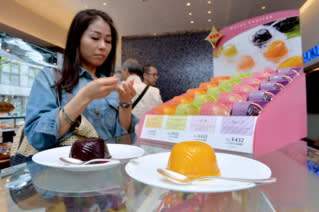 Yokumoku, a cookie maker, is selling a product called Gelee Fruitee between mid-April and the end of August. A five-piece set of jellies in round cups sells for 2,160 yen. It is not their appearance that sets them apart -- it is their texture. They are intended to make customers feel like they are eating La France pears, mangoes and other fruits, rather than jellies.

These sweets makers are defying convention to woo consumers. But as their creations catch on, they may be building new traditions of their own.