Train photography enthusiasts take pictures of the first running of the Train Suite Shiki-Shima as it passes through the city of Nikko in Tochigi Prefecture on May 1.   © Kyodo
May 2, 2017 14:50 JST | Japan
CopyCopied

"With the Shiki-Shima, we would like to create a new level of service and history in rail travel," said Tetsuro Tomita, president of the train's operator East Japan Railway, or JR East, while speaking during the departure ceremony on the same day.

The train departed Ueno Station, one of Tokyo's key terminals, on Monday morning to start its four-day, three-night journey touring through northeast Japan's Tohoku region and the northernmost island of Hokkaido. At Nikko Station, in Tochigi Prefecture, and Hakodate Station in Hokkaido, passengers will have time to disembark and do some sightseeing.

The return leg of the trip will take passengers along a route facing the Sea of Japan. The train is scheduled to arrive back at Ueno Station on Thursday. 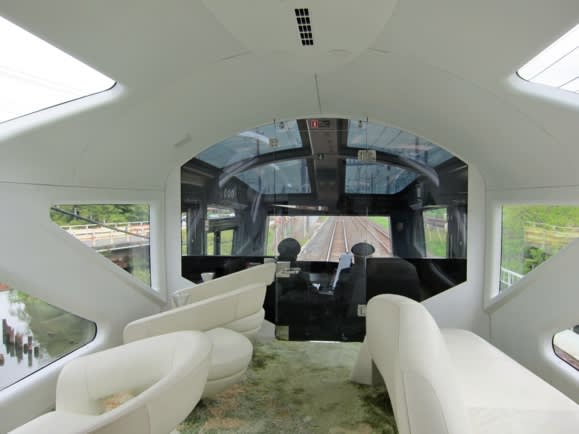 Routes traversed by Train Suite Shiki-Shima vary depending on the season. A one-night tour through central and northeast Japan's Yamanashi, Nagano and Fukushima prefectures will also be available.

A spokesman for JR East said the company has received reservation requests from customers from various Asian countries, although he declined to reveal any nationalities. The spokesman added that all tours were fully booked for the fiscal year ending March 2018. Japan's newest luxury sleeper is equipped with a fireplace.

JR East plans to announce shortly the train's schedule for the next fiscal year, beginning in April 2018. 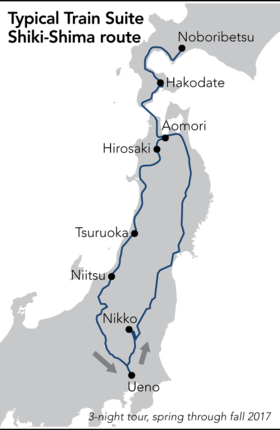 The Shiki-Shima is a 10-coach train consisting of 17 guest rooms in three grades. The most expensive suite costs 950,000 yen ($8,493) per person, if shared by two people. The 20-sq.-meter duplex room is equipped with a bathtub made of hinoki, a type of Japanese cypress tree known for its refreshing scent.

The train is only available for package tours. A bartender shakes a cocktail in the bar inside Japan's luxury sleeper train, Shiki-shima, on April 16.

An early entrant in the field, Kyushu Railway's Seven Stars sleeper, which began running in October 2013 in southwest Japan, significantly contributed to the current boom of luxury trains in Japan. Initial fares were already high, but they have been raised five times since operation began, and the Seven Stars remains popular as evidenced by it most recently attracting 22.5 applications on average for each place on a tour.

The secret to its popularity appears to be the operator's exclusive level of hospitality on offer, paying attention to every detail to satisfy guests. Kyushu Railway's package tour desk representatives are said to contact customers dozens of times before a run in order to understand fully riders' expectations. 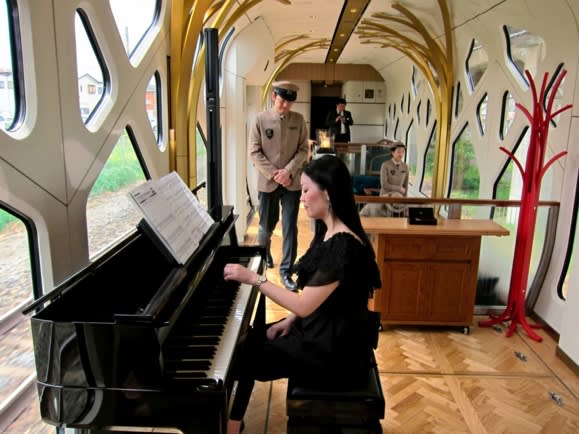 A pianist performs in the Shiki-Shima's lounge.

Meanwhile, West Japan Railway, or JR West, is set to roll out its new luxury sleeper Twilight Express Mizukaze on June 17. The Mizukaze will run on two lines connecting Osaka Station and Kyoto Station in western Japan with Shimonoseki Station at the southwestern tip of Honshu, Japan's main island. A one-night package tour including visits to popular tourist locations, such as the historic city of Kurashiki in Okayama Prefecture, starts at 270,000 yen per person. Tours departing in June through September have drawn more than 2,000 applications.

As luxurious -- and expensive -- as these liners are, though, rail operators do not earn most of their profit from them. Train companies are taking a long-term view with the hope that running high-end tours can increase exposure to locations along the routes, expand local tourism and grow regional economies.