KUSHIRO, Hokkaido -- In an attempt to attract tourists who are looking for more than just Ginza and Kyoto, Lake Akan and its hot springs, in the eastern part of this northern island prefecture, are attempting a new strategy that centers around the culture of the indigenous Ainu people and the pristine environment that they are associated with.

The goal is to increase overseas travelers, who are keen to discover distinctive cultures with a reverence for nature -- hence the appeal of indigenous groups.

On June 17, the first Irankarapte music festival was held at the Lake Akan Ainu Theater. 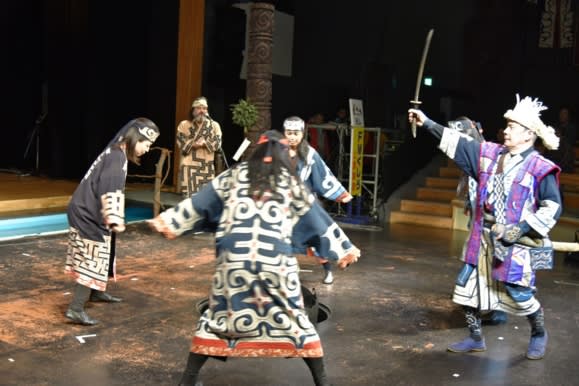 Scenes from the Irankarapte music festival.

Irankarapte, means "Please let me touch your heart gently" in the Ainu language. According to Mann Arai, a nationally well known writer who lives in Hokkaido and is the producer of the festival, the event is the first to try to reveal the hearts of Ainu people to others through music. "We want to make this beautiful word a greeting that will be exchanged around the world," Arai said.

The head of town planning at the Akan Tourist Association Masayuki Onishi is working on an event to be staged in the dark of the night in a forest. Projecting images based on Ainu mythology onto a stand of trees, against a pitch black background, the organizers believe this will be the first of its kind -- melting together indigenous culture and nature. The event is scheduled to be ready for the summer of 2018.

"To increase the number of foreign guests," Onishi said, "We need bold approaches, such as promoting the characteristics of Lake Akan." One of the largest settlements of the Ainu people in Hokkaido.

This is not the first attempt to showcase Ainu culture to overseas visitors. Sculpture and fashions incorporating traditional motifs are among the products the area has sought to market in the past. But the town planners believe that they can promote Ainu culture to the world in a more sophisticated way.

"Let us paint the entire town with Ainu culture." Under that goal, shop owners in Akan are planning to speak the Ainu language and greet guests in traditional Ainu-style clothing. A vacant house will be turned into a fashionable art gallery for traditional crafts.

Many travelers in Europe and the U.S. are interested in more than shopping and beaches these days. Around 100,000 people visited the International Festival of Indigenous People in Italy that began in May.

Kohei Fujito, a sculptor who lives near Lake Akan, attended the event for the first time as a representative of the Ainu people. He was also commissioned to create a commemorative work for the event.

"The request was made suddenly by an Italian researcher, and I felt a high level of interest in the Ainu culture" among attendees, Fujito said In addition to its hot springs, Lake Akan is a center of Ainu culture. Kotan -- "village" in the Ainu language -- is home to about 120 Ainu people and is the biggest Ainu settlement in Hokkaido.

Hokkaido's natural beauty is another big draw for visitors. One particularly beloved symbol of nature on the island is the marimo, an aquatic species of moss that looks like a fluffy green cotton ball. The plant has been designated a natural monument by the Japanese government. 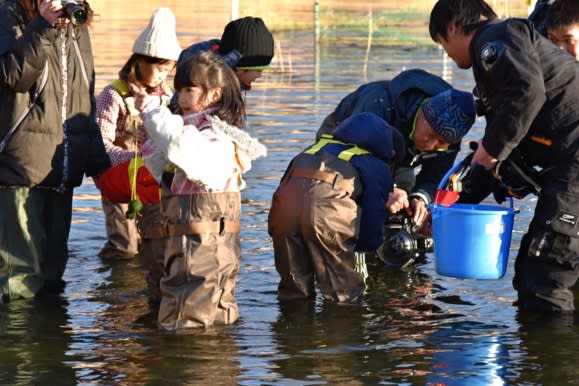 Promotional efforts include the "My Marimo" project, in which local residents grow marimo and exhibit them.

The marimo is a protected plant species and the subject of much academic research. Now the tourism industry wants to make its charms known to the outside world. Promotional efforts include the "My Marimo" project, in which local residents grow marimo and exhibit them. Guided tours of marimo habitats are scheduled to begin next spring.

These and other efforts are aimed at cashing in on the growing market in "adventure tourism," particularly in Europe and the U.S. In June, the Ministry of Economy, Trade and Industry selected Tsuruga Resort, part of Tsuruga group, as a key company in devising a strategy for adventure tourism in Japan.

The government is trying to do its part, selecting Kushiro for four tourism promotion projects, including designating it as a model city aimed at attracting foreign visitors to the country's rural areas.

Although the number of overnight stays near Lake Akan previously topped 1 million, the most recent data puts the annual figure at around 600,000. The model city designation was based on recognition of the area's natural and cultural assets and the need for better access for tourists.

The hot spring district is trying to double the number of foreign tourists from the 2015 level to 250,000 by 2020. Central to the Japanese government's effort is the development of infrastructure, such as walking trails and public toilets.

Onishi said although these measures will help, the district needs more than public facilities to become a popular destination for foreign tourists. His organization is trying to come up with ideas to make the area more appealing.