TOKYO -- An amusement park in southwestern Japan is about to ferry visitors to an uninhabited island aboard an unusual mode of transportation: floating, spherical pods that serve as hotel rooms.

Huis Ten Bosch in Sasebo, Nagasaki Prefecture, will soon offer private overnight excursions in the capsules. A stabilization system and a range of safety measures promise to ensure a comfortable, worry-free ride.

The operator of the Dutch-inspired park, a subsidiary of Japanese travel agency H.I.S., announced the plan on March 6. Following trials, guests selected through a lottery will have the chance to take the trip during this year's Golden Week holidays in late April and early May.

Huis Ten Bosch is looking to formally launch the service this summer, making it available to visitors taking tours of the island. 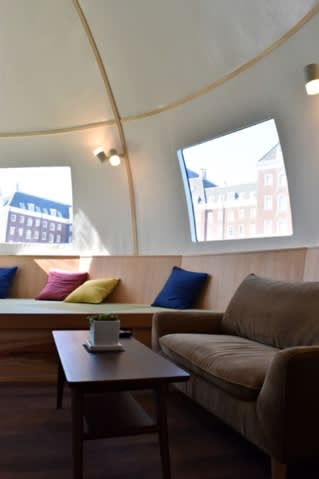 The 28-sq.-meter rooms can accommodate two to three guests.

Two fiber-reinforced plastic capsules, measuring 6.4 meters in diameter, have been developed: one furnished Western-style, the other Japanese. A boat manufacturer and other partners helped to build them.

A boat will tow the pods to the island.

The 28-sq.-meter rooms can accommodate two to three people and feature sofa beds and bathrooms. Each one also has a small deck.

Hideo Sawada, the park operator's president, said safety is the top priority. The capsules were structured to reduce rocking, and weighted to prevent capsizing. Other safeguards include a ship that will monitor the route and an emergency communications system.

"I want guests to have an extraordinary experience, taking in the changing scenery out of the windows," Sawada said. Guests will board the capsules from a pier facing the ocean. The voyage will begin at night, reaching the island in time for breakfast. Anchors will be dropped along the way.

Huis Ten Bosch is thinking about developing capsules that can move on their own. Possible power sources include thin-film solar cells and plant-based batteries the company plans to produce.

"There are things we can upgrade in terms of design and function, so [the floating hotel rooms] will change and evolve," Sawada said.

The president even suggested going global with the capsules, as the company looks to extend its international reach. "It would be interesting if we could provide future services on lakes and calm seas around the world."