Some events draw more homemakers than men in suits 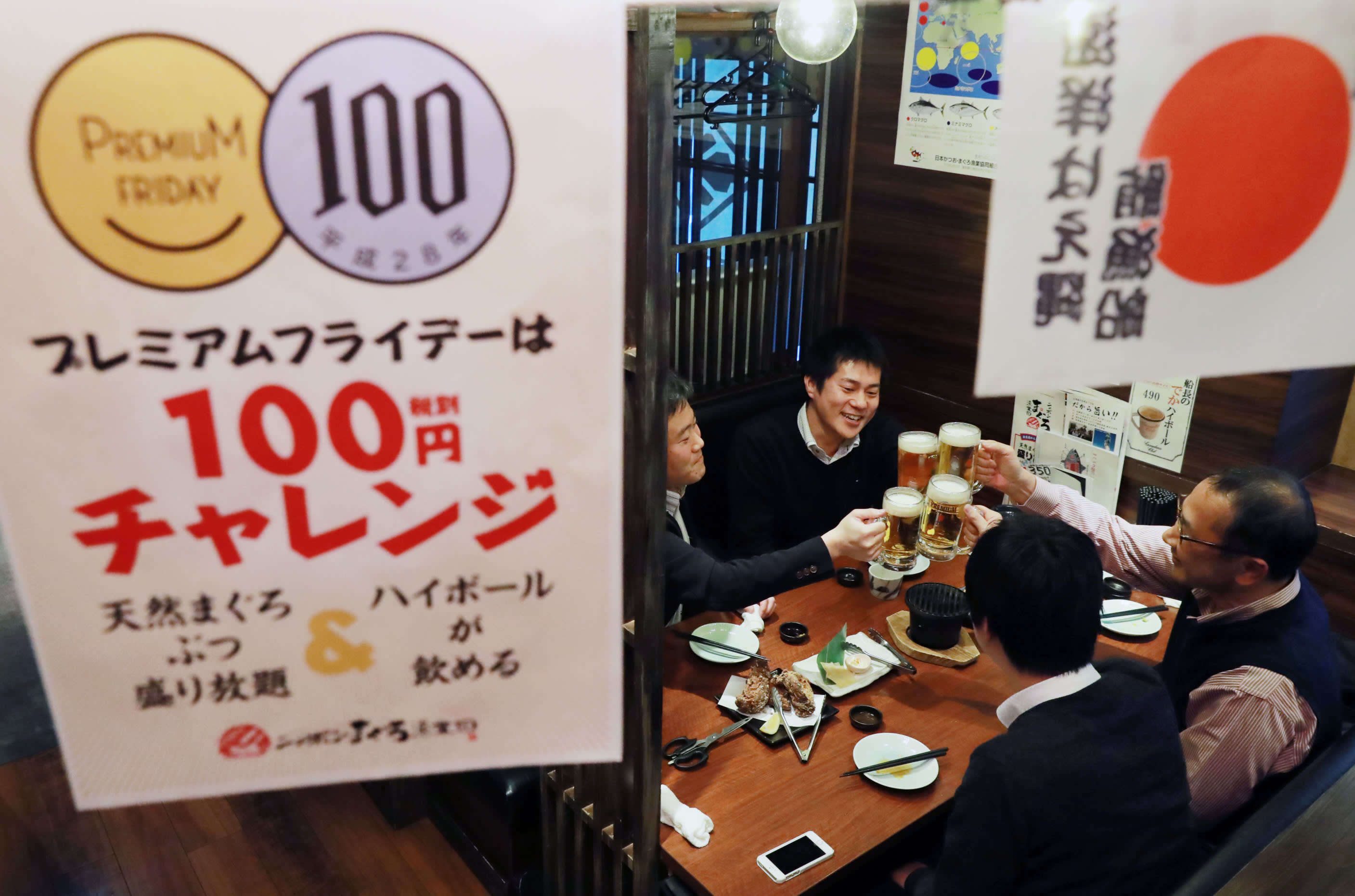 Office workers who left work early enjoy beer at an eatery celebrating Premium Friday. Prices for some menu items were cut to 100 yen.

TOKYO -- The government-led Premium Friday initiative -- letting people out of work early on the last Friday of the month to spur consumption -- has officially rolled out, with Prime Minister Shinzo Abe himself exploring the capital city to enjoy its diversions.

Retailers and restaurants, which hope to benefit the most from the boost in consumption, celebrated with special events and discounts. But many office workers were unable to leave at the suggested 3 p.m. Whether the initiative can yield its intended results is unclear.

Abe tried out Premium Friday for himself. He wrapped up work at his office a little past 3 p.m. and meditated at a Tokyo temple with Agriculture Minister Yuji Yamamoto. Then he went to Ueno Park and enjoyed a brief concert and short films. The experience was "life-enriching," Abe told reporters. He then ate dinner at a French restaurant in the upscale neighborhood of Nishiazabu with actors Junichi Okada and Ryohei Suzuki.

Katsunobu Kato, the minister for working-style reform who visited a Tokyo department store to see Premium Friday kick off, expressed hopes that the goals of work reform will take concrete form at companies via Premium Fridays. Prime Minister Shinzo Abe shakes hands with a performer after a concert held outside the National Museum of Western Art in Tokyo during Premium Friday.

East Japan Railway and others connected hotels and cafes near the Tokyo Station and in the Nihonbashi and Marunouchi areas via a live broadcast to have about 300 people make a toast at the same time.

Retail and service companies prepared well for this day. By 5 p.m. Friday, 4,260 companies and groups had applied with the industry ministry to use the official Premium Friday logo.

Unlike other government-led efforts to boost consumption in the past -- like gift cards to encourage spending in the local economy -- the latest initiative encourages working people with purchasing power to go out and spend their own money.

Preparing special events and discounts does not cost much money, so retailers and service providers jumped on the bandwagon.

The Yomiuriland amusement park in Tokyo had dozens of people in line at 3 p.m. as it offered discount tickets. A 36-year-old woman who usually works overtime on Fridays said she left at 1 and came out to the park to relieve stress.

The manager of a Mitsukoshi department store in Ginza said customer traffic was heavier than usual. A Japanese-style tavern operated by Watami in Minato Ward filled up a little past 3 p.m., with many office workers as customers. A 46-year-old man said finishing work early allowed him to "work hard and play hard."

Few working people to be seen

Active promotion by the government helped attract crowds to these events. But in many cases, those who gathered appeared not to be the targeted working people. At an Aeon store in Shinagawa Ward, men in suits were scarce on Friday, while homemakers flocked to special deals.

Some large companies, like trading house Sumitomo Corp. and SoftBank Group, support Premium Friday as a way to advance work reform. But just eight out of 100 people on the street told The Nikkei their employers have some measures to support the initiative, by encouraging workers to go home early. A 56-year-old man who works in Koto Ward complained that he cannot finish by 3 p.m. with his current workload.

The initiative has yet to permeate smaller localities. The head of the chamber of commerce in Sanjo, Niigata Prefecture, said it was difficult for smaller businesses to adopt the initiative, given that such employers struggle even to give their workers two days off a week.