Pro soccer team looks to AIST to improve management at its 40,000-seat venue

TSUKUBA, Japan -- Controlling crowd movement at large stadiums can be a major challenge, especially in emergencies. Japan's National Institute of Advanced Industrial Science and Technology has teamed up with one of the country's top professional soccer teams to tackle the problem using artificial intelligence.

The huge research institute -- part of the Ministry of Economy, Trade and Industry -- is partnering with the Kashima Antlers F.C. to better manage crowds and perform other tasks at 40,000-seat Kashima Soccer Stadium in Ibaraki Prefecture, northeast of Tokyo.

"A soccer stadium is a treasure trove of research subjects," says Masahiro Seto, a fellow at AIST's Research and Innovation Promotion Headquarters.

When an AIST researcher demonstrated the program, the presence of green dots increased very slowly. "It shows that the flow of people after a game at a 40,000-seat stadium tends to block up," explained the researcher.

AIST plans to use the simulator to assess the effectiveness of the current route-guidance system at the stadium, starting with the 2018 season.

Every time the stadium hosts an Antlers game, it and the surrounding areas become congested afterward, posing a serious crowd control challenge. The project will analyze the flow of people at locations inside the venue in order to determine ways to ease the congestion. This will also help prevent accidents and boost sales at stadium stores. 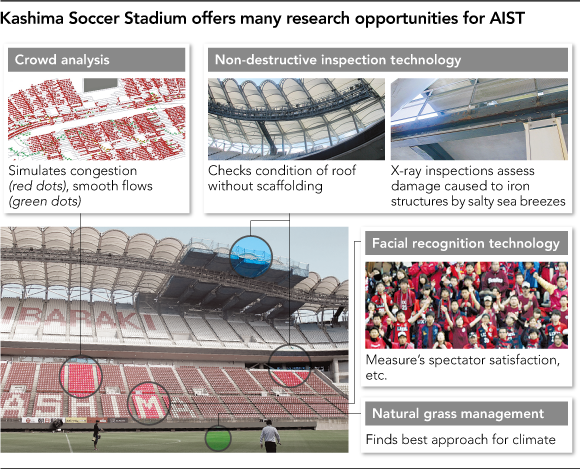 AIST already has experience in crowd control. The institute participated in two live evacuation drills at New National Theater Tokyo, analyzing how an audience of more than 1,000 would evacuate in the event of a large earthquake.

During the first drill, the institute studied the paths taken by participants to exit the venue during the simulated emergency. Findings were then used to improve evacuation routes, which were applied to the second drill, resulting in a smoother evacuation.

The collaboration also involves trying to reduce stadium maintenance costs. The team hopes that AIST's nondestructive X-ray inspection technology will help save on the huge inspection and repair expenses, if only a little.

Japan to step up funding of practical research

Proximity to the ocean makes the stadium subject to strong, salty winds, which corrode its iron beams and stairways. The team spends some 300 million yen ($2.6 million) annually for stadium maintenance, an amount that could pay the salaries of several players.

Tsukuba Technology, a startup born of AIST's research activities, has developed a portable X-ray device to inspect concrete structures like the stadium -- a potential money-saver as it minimizes the need for scaffolding, visual checks and other tasks needed for inspections.

AIST has other infrastructure expertise and technologies that may, for example, help maintain natural-grass playing fields like the one at the stadium.

In addition, the institute's facial recognition technology for security might be deployed to measure audience satisfaction, a task typically left to questionnaires and interviews. Findings could then be used to improve the fan experience.

If its projects at Kashima Soccer Stadium pan out, AIST will have established a solid foothold in the Japanese sports world and, perhaps just as importantly, created new buzz for itself and its research efforts.