Tokyo's Shin-Okubo district offers a taste of the world 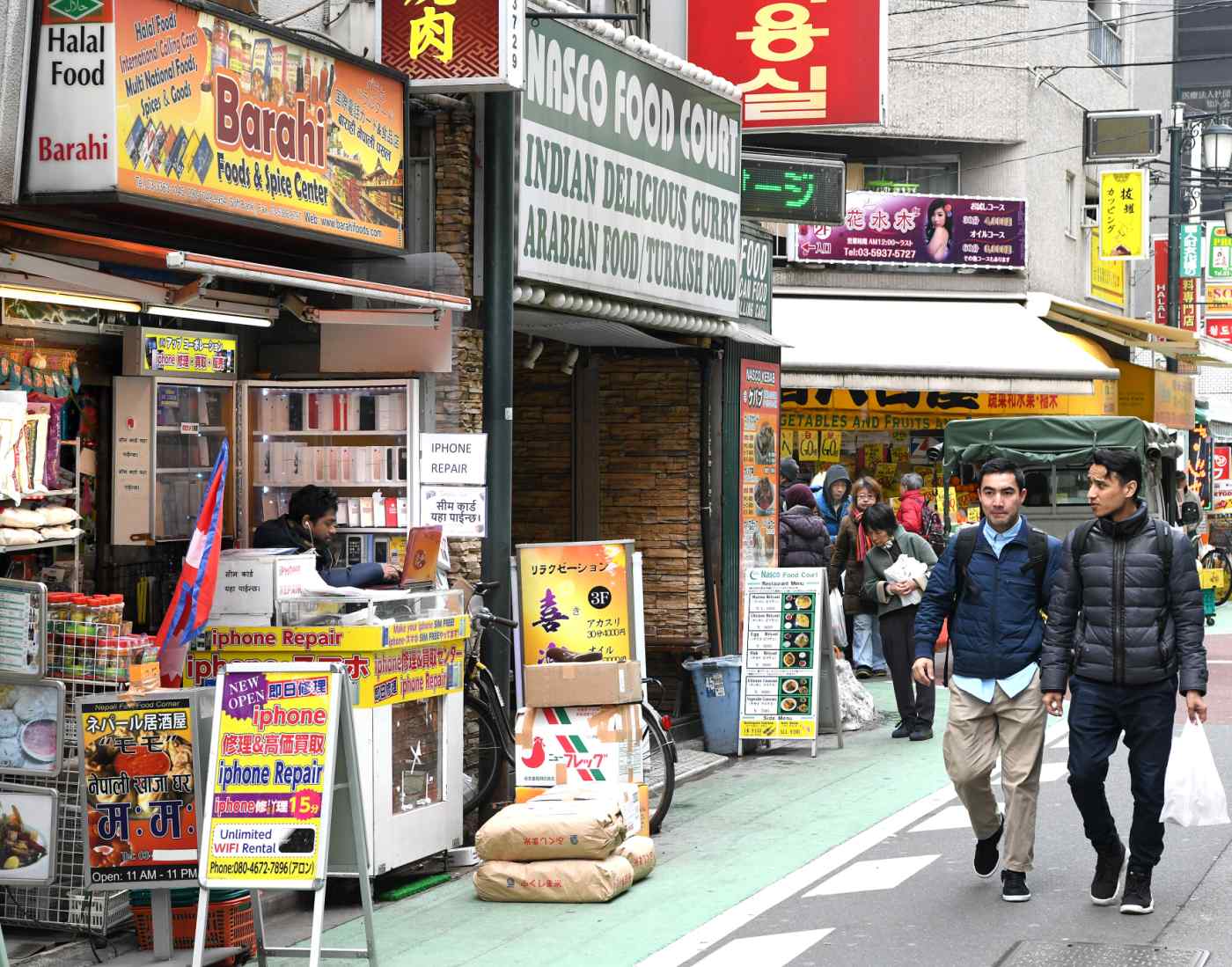 TOKYO -- Tokyo's Shin-Okubo district, best known as the center of Japan's infatuation with all things Korean, is becoming more multicultural, with Middle Eastern, Mexican and Asian restaurants and stores springing up.

Northwest of Shin-Okubo Station, there is an area called "Muslim Town" that is dotted with restaurants touting halal food and people wearing Islamic headgear.

A 39-year-old Nepalese customer from Tokyo's Ota Ward at the Jannat Halal Food shop in Muslim Town said the shop's long-grain basmati rice is expensive but tastes good and goes particularly well with chicken and mutton.

The customer, who came to Japan 16 years ago, is Buddhist but often patronizes the store. It is also frequented by Pakistanis and Bangladeshis. The shop sells more than just food. The Nepalese customer has bought 16 SIM-free smartphones and sent them to siblings and others back home.

Barahi Foods & Spice Center nearby displays a Nepalese flag. It sells spices, halal food and smartphones. A Bangladeshi employee said these days many Japanese customers also come to the shop to buy spices. 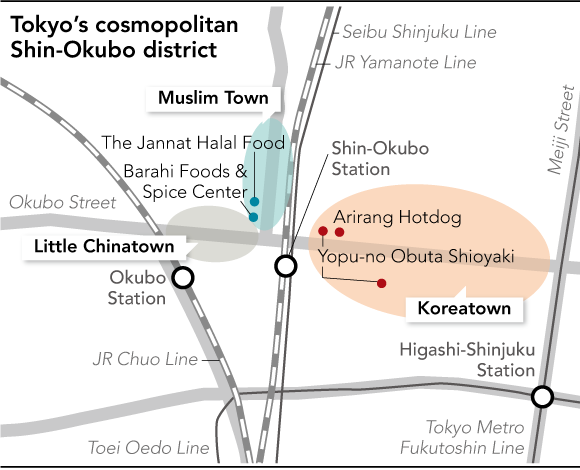 There is a Nepalese-style pub on the second floor of the building that houses Barahi Foods & Spice Center. The building next door has Indian curry, Middle Eastern and Turkish restaurants on the first floor and a beauty salon on the second floor with a sign in Korean script. There is also a Vietnamese noodle restaurant nearby. One can hear many languages spoken on the street.

On the main street to the west of the station, one finds Chinese restaurants and overseas remittance services. The area used to be dominated by Chinese stores, but more South Asian shops have cropped up recently. The east side of the station, home to one of Japan's largest Koreatowns, has a decidedly more female clientele. In fiscal 2016, Shin-Okubo Station served an average of nearly 44,000 passengers a day, up 5% from the previous year. Although the number of visitors to Shin-Okubo briefly declined due to a flare-up of political tensions between Japan and South Korea, the area has started attracting young women again.

"I come to Shin-Okubo for good food," said an 18-year-old high school student from Saitama Prefecture, near Tokyo. She comes to Shin-Okubo regularly. Last year, cheese dakkarubi, a spicy grilled chicken dish and vegetables with cheese, was all the rage. Now other cuisines, served with a South Korean twist, are catching on. "You get addicted to this spicy taste and I like it because it is eye-catching," said a 28-year-old office worker from Tokyo's Meguro Ward enjoying a Yopu Fajita at Yopu-no Obuta Shioyaki. The Korean barbecue restaurant offers dishes that bring Korean flavors to Tex-Mex standards such as fajitas. Spicy shrimp, pork ribs and chicken are served on tortillas with creamed corn and peanut mustard sauce.

South Korean-style fajitas are catching on in the mother country as well. Some say they are about to become the next big culinary hit in Japan.

Another favorite in Shin-Okubo is South Korean-style hot dogs, known to Americans as corn dogs. The South Korean variation is wrapped in rice flour dough and served with coconut powder, ketchup, mustard and other condiments. Last year many restaurants, including Arirang Hotdog, started offering the snacks. An 18-year-old high school student from Saitama Prefecture was walking down the street while munching a hot dog. She said she saw them on social media and decided to come to Shin-Okubo to try one. South Korean cheese dogs are particularly popular. Dripping with melted cheese, they certainly do look tasty.

The Winter Olympics in Pyeongchang, South Korea, with its frigid temperatures, may not lend itself to street life. But across the sea in Shin-Okubo, trendy young people are flocking in to sample the cosmopolitan fare.