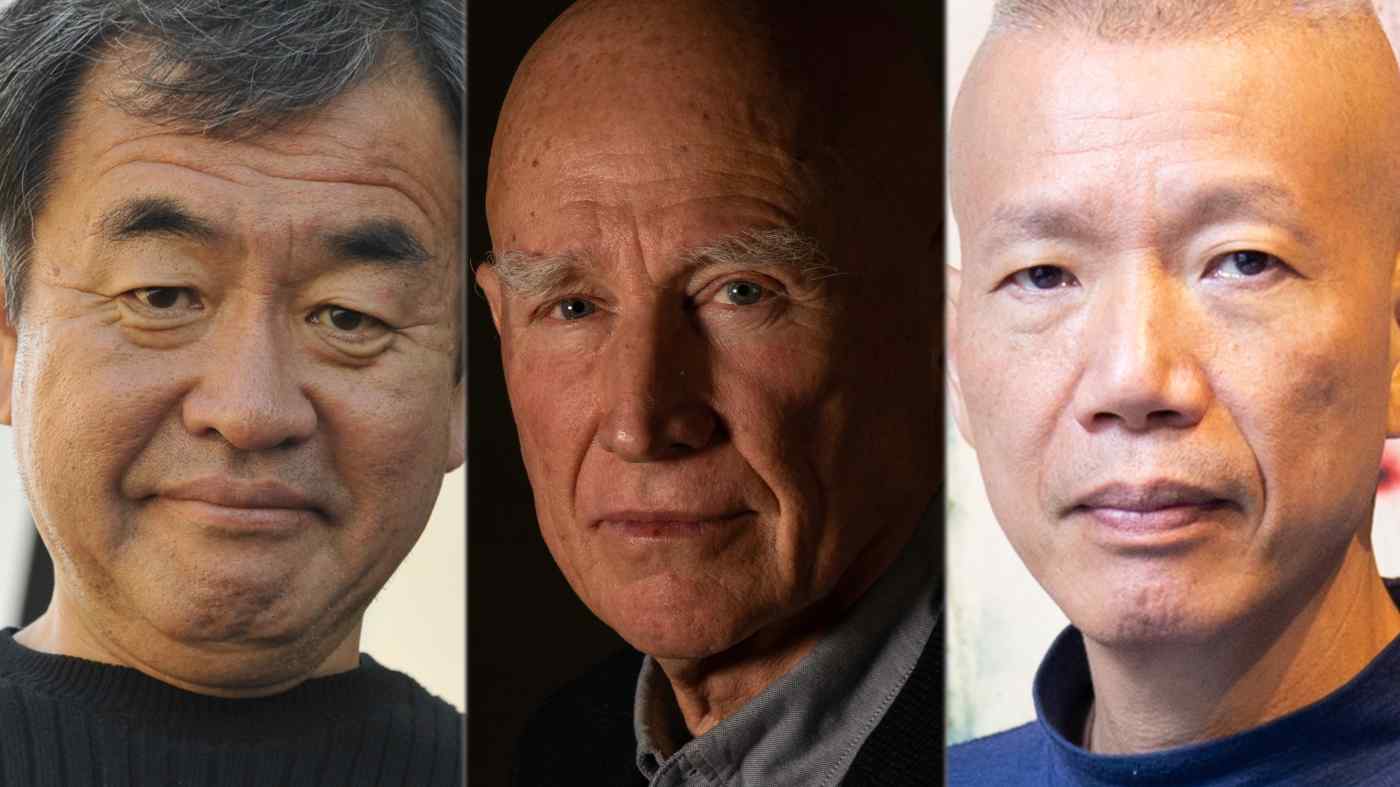 TOKYO -- No longer seen simply as repositories for fossils and ancient objects, museums around the world have transformed over the past decades from merely collecting and sharing their works to helping shape historical and cultural legacies and bringing different communities together.

But the growing role of museums in bridging the past, present and even the future through the involvement of contemporary artists, scientists and designers has fueled debate about the mission of such institutions, public and private.

Some 3,000 professionals from museums around the world will gather in Japan's old capital of Kyoto from Sept. 1 to 7 for the triennial conference of the International Council of Museums, a key international body of museum professionals, to discuss the evolving social function of museums in the 21st century.

Three internationally renowned artists scheduled to address the conference recently spoke to the Nikkei Asian Review about the main theme, "Museums as Cultural Hubs: The Future of Tradition," and how museums should interact with communities.

To Japanese architect Kengo Kuma, who has designed acclaimed museums around the world, including Besancon Art Centre and Cite de la Musique in France, and the Suntory Museum of Art in Japan, museums are a refuge in which to reflect and reconnect with daily life. "Museums are not only spaces dedicated for artworks and objects, but should also be living rooms for communities," he said.

Kuma, one of the designers of the New National Stadium of Japan, is known for his striking building designs and innovative use of contemporary materials. Among his notable museum designs is the V&A Dundee, which opened in September 2018 as the first design museum in Scotland. 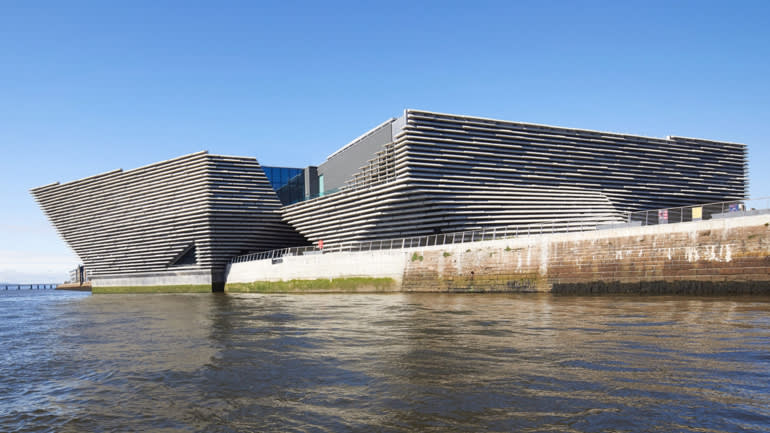 The V&A Dundee, designed by Kengo Kuma, opened in September 2018. (Photo by ©Hufton+Crow）

"Dundee has its city center at the top of the hill, making the riverfront a little empty," Kuma noted, recalling the time he spent in the city. Located on the banks of the River Tay, a historical trade route for the city, the V&A Dundee is intended to evoke cliff faces with its 2,500 horizontal concrete panels, creating multiple curves. The building is designed to underline the harmony of nature of Scotland's well-known cliffs as well as the lifestyles of residents, who have long relied on the river. The building features a triangular arched gap at its center that gives a feeling of connecting Union Street, which runs through the city center, and the River Tay.

"I wanted to make a place where anyone in the community, even those not interested in art, can gather," he said.

As he did with the V&A Dundee, Kuma aspires to bring nature to the heart of the city. Such goals, he feels, are part of an important transition taking place in the architectural world. "If concrete symbolizes the era of industrialization," he argued, "local materials from nearby areas are required for architecture today to have a soothing effect on people."

Another of his buildings, Memu Meadows Experimental House, in the town of Taiki, on Japan's northern island of Hokkaido, is a good example of mingling nature and local community. The house consists of many wooden pillars and is covered by a synthetic material, inspired by the homes of the indigenous Ainu people, which are traditionally enveloped with a layer of sedge or bamboo grass for thermal insulation to protect against the severe winters. Memu Meadows Experimental House in Hokkaido is inspired by the homes of the indigenous Ainu people. (Photos by Kengo Kuma and Associates)

One of Kuma's culture-hub designs, the Asakusa Culture Tourist Information Center in Tokyo, gives the impression of seven traditional one-story Japanese wooden houses stacked one atop another. In this layered design, each floor, with sloped roof and ceiling as well as wooden louvers, welcomes foreign visitors with a fresh take on Japanese culture. But it also appeals to young locals who have not experienced life in traditional houses.

"Architecture as heritage is now transforming building design into tools to heal people, and this is true in museums as well," Kuma said. "Museums are not only places to display artworks but should be integrated into various aspects of today's lifestyle."

Another keynote speaker at the ICOM conference is the multi-award-winning Brazilian-born photographer Sebastiao Salgado, whose recent work translates the wild and untouched nature of the Amazon forest in his home country through museums. He has photographed scenes of famine, genocide and chaos around the world, but for him, displaying his Brazilian-themed work in big venues is part of alerting the audience to the dangers facing the world's largest rainforest.

"I have been traveling in Amazonia for the past several years, working with about 12 different Indian communities and taking pictures. But pictures themselves don't mean anything," said Salgado. "I need museums around the world to show my pictures. The idea is to preserve this land and forest. ... We must participate in a much, much bigger game in order to protect Amazonia." The Amazon, home to 40% of the world's rainforest and more than 10% of the earth's land species, is now "living in huge danger, due to [policies of] the new government," the 75-year-old photographer said. More than 60% of the Amazon lies in Brazil.

"The new government ... doesn't understand that we must protect the forest," Salgado said, noting that the rainforest is the biggest source of rain and rivers. "All the air we breathe comes from Amazonia to the world. It is very important for the planet. We depend on it.

"Photography is not something you make into a concept or you write. ... Photographers know where they will go, but they don't know what pictures they will be taking because things happen in front of them," he said. "It is a fraction of a second. You freeze this moment, and this becomes a presentation of reality." 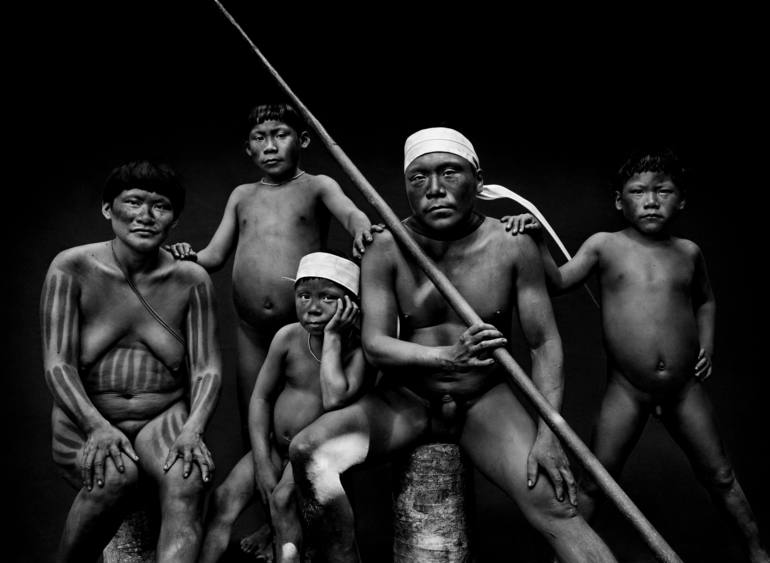 Salgado will present his project on the Amazon in books and exhibitions at museums around the world in 2021. "I hope to motivate people in museums to raise questions and discuss them, to meet these movements all over the world," he said.

"Museums are the memory of society," Salgado said. While industry and major social phenomenon change with time, "museums hold everything."

Cai Guo-Qiang, a Chinese-born artist famed for his gunpowder and fireworks displays, believes museums should promote more interaction between exhibits and the audience, engaging communities in the process. In recent years, Cai has been exploring what museums can offer to visitors, particularly local communities.

"When people go to museums today, they look at a few famous works," said Cai. Sandro Botticelli's paintings in Florence's Uffizi Galleries, for example, have become masterpieces. Visitors queue for hours, take a look and then walk away. "Now museums have become tourist attractions and local citizens rarely come in. Tourists contribute to a city's GDP, but the city becomes a cemetery of past culture."

In November 2018, Cai arranged a display of over 50,000 fireworks in the skies of Florence, inspired by the flowers in Botticelli's "Primavera," as a prelude to his exhibition in the Uffizi. "I hoped to bring the soul of the Renaissance masters to the historic Italian city," Cai said. "Bringing out the flowers and plants here as gifts to the people in the city. ... I hoped these masters would live not only within the cold walls of an art museum, but also in the streets and the city, just like they did in those days."

"City of Flowers in the Sky": a daytime explosion event in Florence, Italy, in 2018 (Photo by Wen-You Cai, courtesy of Cai Studio)

Cai, one of the directors for the opening and closing ceremonies for the 2008 Beijing Olympics, designed and built a museum with a local community in Japan. In 2013, the Snake Museum of Contemporary Art was opened in the northern city of Iwaki, which was at the heart of the area devastated by the 2011 earthquake, tsunami and subsequent meltdown at a nearby nuclear power plant.

The museum was initiated by the artist, local residents and around 400 volunteers, who together built a 99-meter-long winding corridor using nearby trees contaminated with radiation. This was part of the Iwaki Manbon Sakura Project, a community effort to plant 99,000 cherry trees over 99 years in the surrounding woodland. So far, more than 4,000 cherry trees have been planted, including in the museum area.

"Originally, I wanted to help them rebuild their houses, as hundreds of thousands of people were forced to leave their hometown after the earthquake," said Cai, who spent a large part of his early career in Iwaki and other parts of Japan. He donated one of his artworks for a charity auction soon after the earthquake to help the city. The Snake Museum of Contemporary Art opened in 2013 in Iwaki, a city in northeastern Japan devastated by the 2011 tsunami and nuclear disaster. (Photo by Kazuo Ono, courtesy of Cai Studio)

But rather than housing, local residents suggested he start a project to plant cherry trees as a tribute and to remind future generations of the catastrophe. "I was deeply touched by the hopes and expectations of friends in Iwaki," he said. "This once-radioactive land will be covered with the color of cherry blossoms."

After holding a local children's painting competition, Cai came up with the idea of building a public venue to present the paintings. Some of his sculptural pieces are also currently on display at the site. "I hope that in the future, there will be exhibitions and various festivals and cultural events there, and that foreign artists can come to have artistic exchanges with the locals," Cai said.

"'Everything is Museum' has become my project for many years," Cai added. "Art can bring hope to people through concrete actions."