100 years on, Asia has largely forgotten the 'Great War' SOMME, France -- Wielding lances and swords, their pennants flying, the Indian cavalrymen galloped up a slope toward the trees, meeting withering fire from machine-guns that were not supposed to be there.

"They galloped on through with no hope," wrote an eyewitness to the charge by men of the 20th Deccan Horse, a cavalry unit of Britain's Indian Army, during the battle of the Somme. "A magnificent sight. Tragic," the eyewitness said.

A hundred years since the end of World War I on Nov. 11, 1918, this and other dramatic episodes -- perhaps even the conflict itself -- are mostly forgotten in Asia, even though hundreds of thousands of Asians took part after fighting broke out in Europe in August 1914.

Initially, the war was fought largely in Europe by the Triple Entente -- the French, Russian and British empires -- and the Central Powers, the German and Austro-Hungarian empires. However, the conflict widened rapidly, eventually including Japan, Italy, the U.S., China, Thailand and other countries in the Triple Entente alliance and the Ottoman Empire (rooted in modern-day Turkey) and Bulgaria on the side of the Central Powers.

The automatic involvement of European colonies in Asia, such as French Indochina, spawned a generation of communist revolutionaries such as Vietnam's Ho Chi Minh, fueled the struggles of colonized Asians in many countries against their Western masters, and stoked ambitions in both China and Japan to achieve equality with the world's leading nations.

"Even today the Great War's legacy impacts on Asian society, still influencing national development and relations with the outside world," said Xu Guoqi, a historian at the University of Hong Kong and author of "Asia and the Great War." The Great War was the name given to the conflict before its horrors were surpassed by World War II in 1939 to 1945.

An estimated 2.4 million Chinese, Indians, Japanese, Nepalese, Thais, Indochinese and other Asians fought or labored for the Triple Entente -- many on the Western Front in France and Belgium, where they suffered from freezing winter weather, foreign cultures, prejudice and the unrelenting bloodletting of trench warfare. Tens of thousands are known to have perished, although there is no accurate body count. "This is not war. It is the ending of the world," one Indian soldier wrote home.

India, then under British rule, provided about 1.4 million troops and a labor corps to serve overseas, the soldiers fighting alongside European troops in battles from Ypres in Belgium to Gallipoli in Turkey. More than 130,000 were killed or wounded; a memorial at Neuve Chapelle, in France, honors 4,742 Indian soldiers with no known grave. Gurkha soldiers from neighboring Nepal won 2,000 gallantry medals fighting with British forces; 20,000 were killed. One Gurkha battalion fought to the last man in the Western Front battle of Loos. The Thiepval Memorial commemorating 72,205 British and South African soldiers declared missing in the Somme battle. It is the largest Commonwealth war memorial in the world. (Photo by Denis D. Gray)

There was also widespread involvement by soldiers and laborers from other Asian countries and colonies, mostly on the side of the Triple Entente. Japan's navy, for example, shielded allied ships in the Mediterranean from German submarines, and secured vital sea lanes across the Indian and Pacific oceans, even protecting the Hawaiian islands (the target of Japanese bombing in December 1941, precipitating America's entry into World War II).

France sent almost 100,000 soldiers and some 50,000 workers to the war fronts from its colonies in Vietnam, Laos and Cambodia. Thailand, which was never colonized by Europeans, dispatched 1,284 volunteers, including pilots, although they arrived too late for most of the fighting.

Despite low expectations, including racist remarks by future prime minister Winston Churchill and others, Britain accepted offers from China to send 100,000 workers to aid its war effort, while the French gladly welcomed 40,000. Up to half a million Chinese labored for the Russians before the 1917 Bolshevik revolution took Russia out of the war. Largely unsung and often victims of gunfire and disease, these workers drove trucks, repaired tanks, worked on farms, assembled artillery shells and dug trenches. Those who did not return home established Chinatowns in Paris, London and elsewhere. 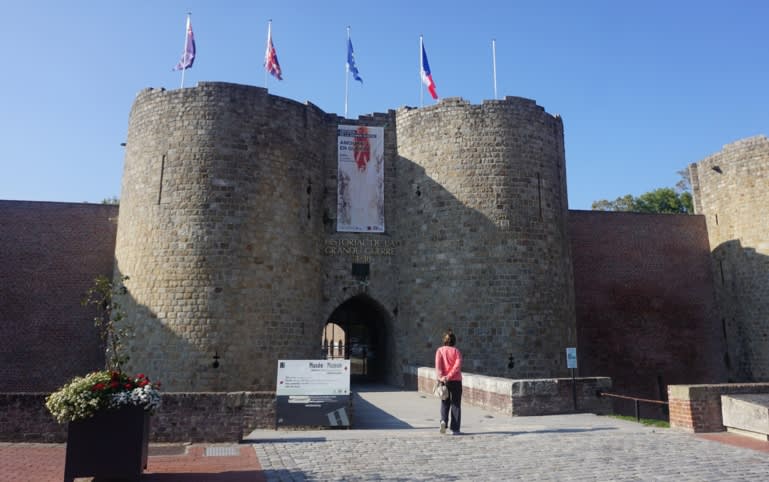 Museum of the Great War in Peronne where 1,600 artifacts and images of the conflict are preserved (Photo by Denis D. Gray)

Many of the Asians who did return served to undermine the moral and political authority of colonial powers. Heather Streets-Salter, a historian at Northeastern University in Boston, said the soldiers and laborers were "frequently disabused of the notion of European superiority based on 'civilized' values, given the fact that they were tearing themselves apart in such a brutal way." They also came face to face with racist attitudes in ways that were less obvious in European colonies, where many Asians had only minimal contact with Europeans. 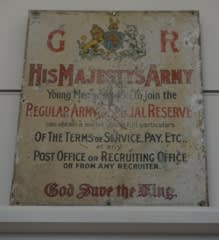 A recruiting poster displayed at the Museum of the Great War in Peronne (Photo by Denis D. Gray)

"Additionally, the war 'sped up' the (independence) clock because anti-colonial leaders, and even some pro-colonial subjects, expected to be rewarded by their colonial administrations when the war was over," said Streets-Salter, author of "World War One in Southeast Asia."

The U.K.'s grant of limited self-government in India in 1919 failed to extinguish rising nationalism among Indians, which eventually led to independence in 1947, after the further upheaval of World War II. Disillusionment also grew rapidly in other European colonies after greater participation in self-government failed to materialize.

Already angry at being heavily taxed to support France's war effort, many Vietnamese returnees joined the anti-colonial movement, bringing back knowledge of how to organize trade unions and ideals informed by the Bolshevik revolution, the legacy of which remains rooted in communist Vietnam. In the Korean peninsula, U.S. President Woodrow Wilson's vision of a post-war world free of colonialism encouraged Koreans to struggle against their Japanese overlords.

"The war was as much an opportunity for Asia as it was a tragedy in Europe," said Xu. It signaled the end of the old order and for China, a "springboard for national renewal." Sending workers to the war, said Xu, was part of a grand strategic decision -- an "obsession" -- among post-imperial leaders in China, who wanted the country to join the world as an equal member of the family of nations. These views represented a new and uncharted approach for the Chinese, earlier humiliated by Western powers. Representation of a German soldier and his kit, including an accordion, at the Museum of the Great War in Peronne (Photo by Denis D. Gray)

China had faith in Wilson's ideals, but at the war's end it was treated more like one of the vanquished than as a victor. In what Xu termed ''a great betrayal,'' a peace treaty signed in Versailles, France, allowed Japan to retain a foothold in China which it had gained during the war. This occupation of Shandong Province opened the gates to Japan's later invasion of much of the rest of the country. "The legacy of desire to become an equal partner, the disillusionment with the West and the post-war betrayal continue to shape Chinese consciousness today,'' Xu said.

While Japan fared better at Versailles, its strong push for a "proposal to abolish racial discrimination'' was turned down, prompting heightened nationalism and anti-Western feelings which led to its involvement in World War II.

Although it was a milestone, historians say the war has faded from the collective Asian memory, overshadowed by the catastrophic events of World War II. Fighting in Asia was relatively minor in 1914 to 1918, limited largely to a few naval battles, the allied takeover of German colonies in the Pacific, and a siege of the German colony of Tsingtao in China. As a result there are few monuments to visit or commemorations to attend. Looking up the slope over which the 20th Deccan Horse charged toward the distant High Wood (Photo by Denis D. Gray)

In contrast, poppies -- enduring European symbols of grief and remembrance -- and images of the dead grace the tombstones across the Somme battlefield, where more than 1 million soldiers from both sides fell during 141 days of slaughter.

Numerous commemorative events in France and other European nations will be held during the anniversary of the end of the war. However, few visitors are likely to seek out High Wood, near the Carnoy Valley area of the Somme battlefield, where the Indian horsemen and a British unit, the Seventh Dragoon Guards, charged in the early evening of July 14, 1916.

Their orders were to pass through a gap in the German line created by infantry, in order to attack the German rearguard. Slow communications delayed the charge, allowing the Germans to regroup before it started. Estimated casualty figures vary widely, but as many as 171 men and scores of horses may have been cut down in the two-unit assault.

The gentle slope up which the Deccan Horse rode in one of history's last cavalry charges is now sown with wheat and beetroot. In the distance two tractors work the fields. At High Wood, where thousands still lie in unmarked graves, the silence is broken only by a cool autumn breeze rustling through the branches.