TOKYO -- Japan has long been criticized for not offering enough opportunities for women to thrive in the corporate world. Last month the Organization for Economic Cooperation and Development, and this month the International Monetary Fund, came out with reports suggesting that enhancing women's participation and advancement in the workplace was a crucial component of structural reform needed in Japan to counter the demographic decline and aging of the population. However, a recent survey by the Intelligence HITO Research Institute showed that only 24.4% of working women in Japan wanted to become a director or manager at their company. The remaining 75.6% said they were not interested.

The figure stood out in comparison to a survey done by Bain & Co. that found 72% of women in China, 69% in Australia and 43% in the U.S. reported the ambition or the confidence to reach top management.

The reasons for Japanese women not wanting to get promoted, according to the 1,058 respondents in the Intelligence survey, in general fell into two categories. The women expressed either lack of confidence ("Not confident in leadership skills" or "Lack of role models") or reluctance about the inconvenience such a promotion would bring ("The position requires longer hours" or "I don't want more burdensome work").

The survey results may come as a surprise to Prime Minister Shinzo Abe, who has been pushing for more women in leadership positions. In 2013 he called for all listed companies to have at least one female board member. Starting this fiscal year, all companies are required by law to show the ratio of female board members in their financial reports. The government has set a goal of filling 30% of leadership positions in Japan with women by 2020.

Intelligence suggests that the quickest and surest way to achieve the 30% goal is to focus on the 24.4% of women who expressed willingness to become managers. "Many of these women said they would like to take on more important roles. Companies can assign these women to influential and important positions, and offer training and feedback to boost confidence."

The institute also noted that several of the women said the reason for not aspiring to top positions was that they felt bad for taking away opportunities from male colleagues. "While corporations are actively changing so that women can rise to management positions, some women are uneasy about the cold gazes from male workers who fail to keep up with the changes taking place. Corporate executives must protect women from such meaningless criticism," the report said. 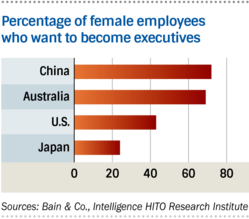 It's not that women in Japan are unqualified. The OECD report notes that in 2011, 63% of young women (25-34 years of age) had a university degree, as opposed to 55% of young men. Whether women lose their ambition due to Japan's male-dominated society, the cultural pressures that expect women to take care of the home, or some women's preference for an easy life, is a matter for debate.

In a 144-page report, "Economic Survey of Japan," released in mid-April, the OECD said that Japan must increase female participation in the workforce to counter the decline of the working-age population -- those aged 15-64 -- which is falling by more than 1 million a year.