A bird spotter's guide to Myanmar 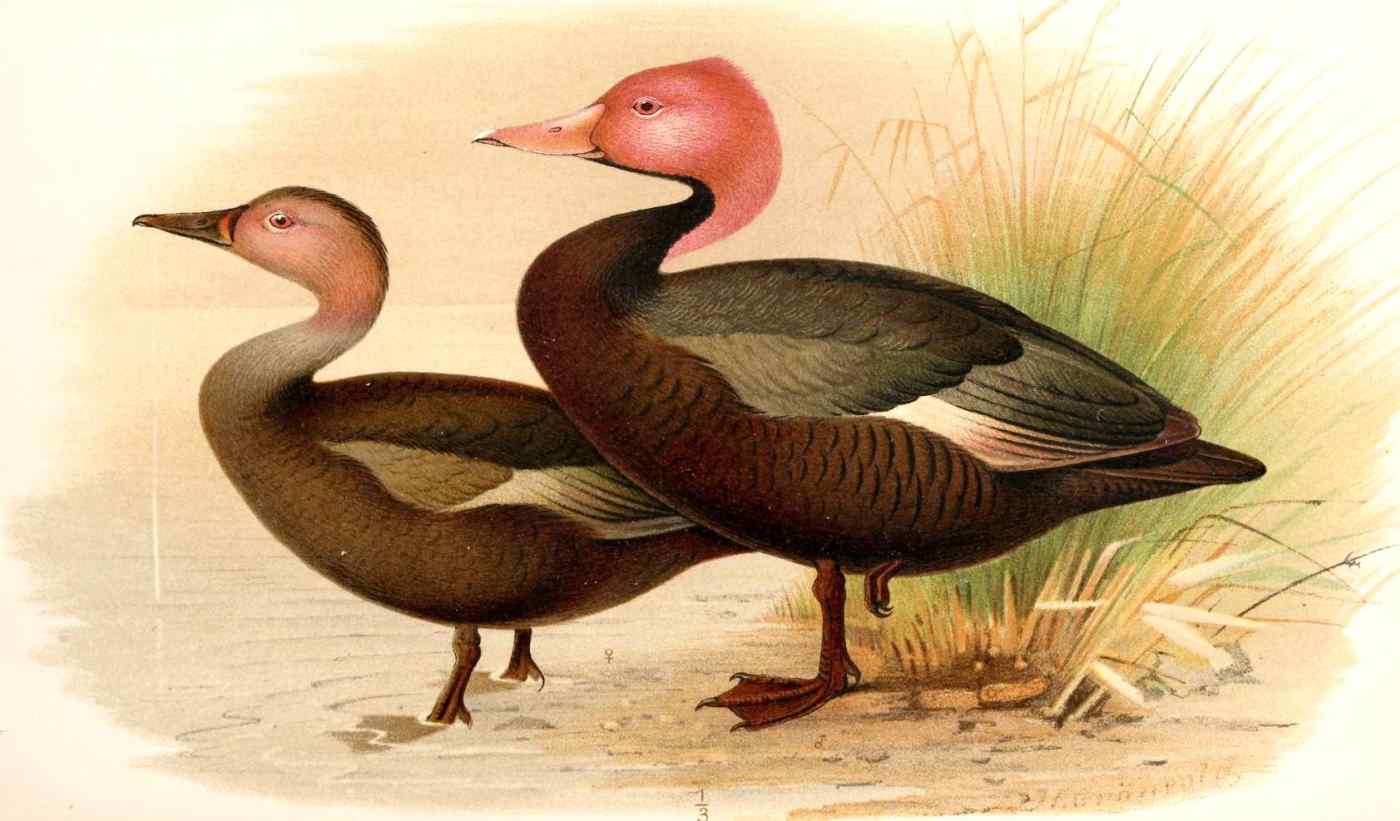 A drawing of the elusive pink-headed duck. Once found across India, Bangladesh and northern Myanmar, it has not been spotted in the subcontinent since 1949. (Henrik Gronvold)
LINDSAY STUBBS, Contributing writerAugust 5, 2020 04:00 JST | Myanmar
CopyCopied

LON TON, Myanmar -- Indawgyi Lake, the third-largest body of fresh water in Southeast Asia, is home to more than 20,000 water birds. But the question for dedicated bird-watchers is whether they include the elusive pink-headed duck, once found across India, Bangladesh and northern Myanmar, but unseen in the subcontinent since 1949.

The pink-headed duck (Rhodonessa caryophyllacea) is among several bird species classified as critically endangered that are -- or have been -- resident in this remote area near Lon Ton in northern Kachin State. Others include the white-rumped and slender-billed vultures (Gyps bengalensis and Gyps tenuirostris), and Baer's pochard (Aythya baeri), a colorful diving duck -- male birds have glossy dark-green heads and boldly patterned chestnut-and-white sides.

The prospect of seeing large numbers of birds, and possibly spotting one of these rare species, draws many intrepid bird-watchers each year to Indawgyi, which is classified by UNESCO as a global biosphere reserve and is one of 21 sites identified by Myanmar's Ministry of Forestry as possible ecotourism developments. Others include Putao in the Himalayas and Mount Victoria (also known as Nat Ma Taung) in Chin State, on Myanmar's western border with India.

In Myanmar's post-Covid-19 efforts to restart tourism, these sites will undoubtedly remain in the country's plans to woo nature lovers -- particularly bird-watchers. Foreign tourist numbers rose from 2.9 million in 2016 to 4.4 million in 2019, but tourism from Europe was hit last year by international criticism of the Myanmar military's brutal expulsion of nearly 1 million Rohingya Muslims from western Rakhine State to neighboring Bangladesh. The spread of COVID-19, while minimal in this country of about 54 million people, has already caused a sharp drop in visitor numbers this year, including from neighboring China, where interest in traveling to Myanmar had been rising.

Large-scale tourism will eventually restart, helped in the longer term by a planned new railway from China, and ecotourism offers a largely untapped market that could also help to sustain Myanmar's natural resources, officials say. 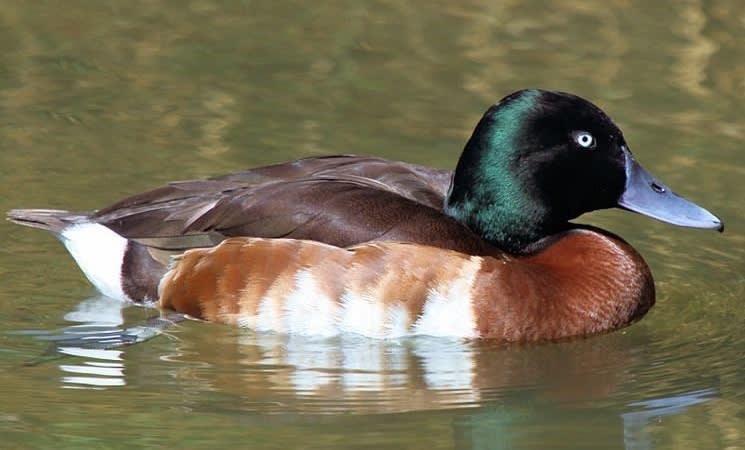 Top: The wetlands at Indawgyi Lake. (Lindsay Stubbs) Bottom: The critically endangered Baer’s pochard duck has been sighted at Indawgyi, but is under pressure from hunting and loss of habitat. (Nigel Key)

But conservationists warn that the sites need to be better managed and conserved, not just exploited for short-term profits. That has not happened at Inle Lake, in southern Shan State, which attracts large numbers of foreign and domestic tourists but is suffering major problems from fertilizers and pesticides that wash into the water from floating gardens, causing excess algae growth and harming wildlife.

International organizations are helping Myanmar to avoid similar issues at Indawgyi, where water quality is also threatened by fertilizer and pesticides from nearby rice farms, along with illegal gold mining that causes pollution and sedimentation in the southern part of the lake. The Indawgyi Wetland Education Centre, based at Lon Ton, is supported by overseas organizations such as the German Ministry for Economic Cooperation and Development. (Lindsay Stubbs)

Inn Chit Thu, a local not-for-profit ecotourism organization, is developing tours for foreign ecotourists, including bird-watchers. Its Indawgyi Wetland Education Centre is based at Lon Ton, and is supported by overseas organizations including the German Ministry for Economic Cooperation and Development, the Germany-based nongovernmental organization Chances for Nature, and U.K.-based NGO Fauna & Flora International, which counts the environmentalist and broadcaster Sir David Attenborough as one of its vice presidents.

Bird-watchers who make the long journey to Indawgyi can be sure of an opportunity to study the breeding grounds and roosting sites of around 160 species of birds, some of which have migrated from as far away as Siberia. But is the pink-headed duck among them?

In an attempt to find out, I made the four-hour journey by train from Myitkyina in the far north of Kachin State to Hopin, followed by a one-hour drive to the lake in a small truck. I stayed in the government-owned Indaw Mahar Guesthouse, a place of warmth and character with just eight rooms in Lon Ton -- the only village where foreign tourists are allowed to stay. On the road outside, ethnic minority Red Shan and Kachin women sold local honey and fermented fish wrapped in bright green banana leaves.

On my first day at the lake, I traveled by long-tail boat to Shwe Myitzu Pagoda, spotting numerous water birds along the way. The pagoda, which shimmers and glistens gold and red in the midday sun, is accessible only by water for most of the year, but pilgrims can walk to it in March, when the pagoda festival is held. Top: A Red Shan woman at Indawgyi Lake. Bottom: The Shwe Myitzu Pagoda is accessible only by water for most of the year. (Lindsay Stubbs)

The next day, I traveled to the southern part of the lake. My guide, an accountant by training, was passionate about birds, especially those at Indawgyi, and he lent me his Nikon binoculars to study them more closely. Twice a month he carries out a count of the birds.

Skirting the shore of the lake in a long-tail boat, I found that many water and forest birds could be seen near the water's edge. Flocks of cotton pygmy geese, common coots, egrets and cormorants took wing at our approach. Purple swamphens scurried away. Toward midday, flocks of shelducks and graylag geese took to the sky as we approached. Indawgyi Lake is home to over 1% of the global population of the purple swamphen and the graylag goose, according to conservationists.

We were also fortunate to see a pair of kingfishers with iridescent blue backs, darting high up among the trees on the shoreline. What I was really looking for, though, were the rare birds included in the International Union for Conservation of Nature's Red List of Threatened Species -- the world's most comprehensive information source on the global extinction risk status of animal, fungus and plant species. 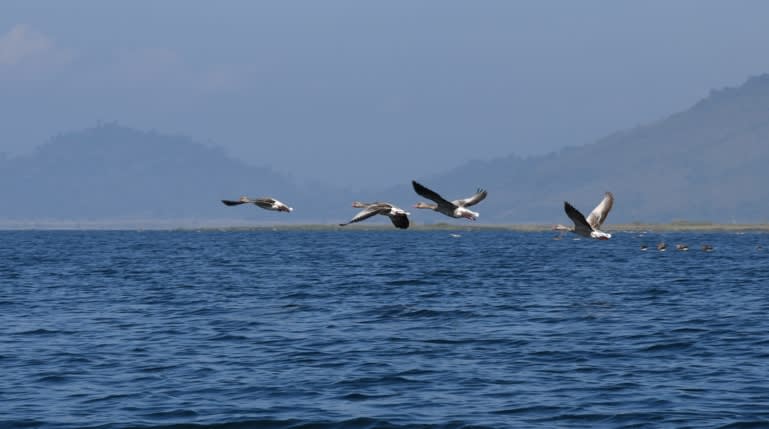 None are easy to find. The Baer's pochard duck, classified as critically endangered, winters in Myanmar and has been sighted at Indawgyi, but is under pressure from hunting and loss of habitat. The redheaded Sarus crane, the world's tallest flying bird at up to 1.5 meters, is listed as vulnerable and is used as the logo of the wetland education center, but was last sighted at the lake in 2014.

My prime quarry, the pink-headed duck, was last seen in Myanmar in 2006, although even that sighting was unconfirmed. According to the IUCN Red List, the number of adult birds is somewhere between one and 49. In 2017, an expedition led by Richard Thorns, a British bird-watcher, searched for it at Indawgyi in vain, despite using elephants to reach remote areas of the lake. 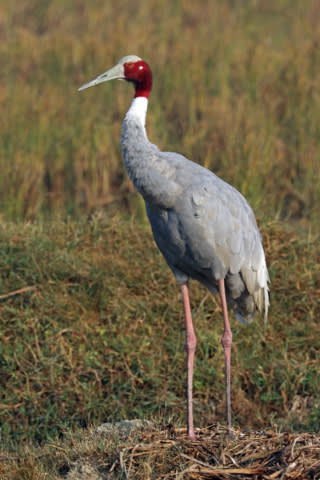 The redheaded Sarus crane, the world’s tallest flying bird at up to 1.5 meters, was last sighted at the lake in 2014. (Charles J. Sharp)

Most ornithologists believe that the pink-headed duck is probably extinct, and Baer's pochard may be close to that fate, although there have been confirmed sightings at small lakes near Mandalay, in central Myanmar. The endangered vultures are sometimes seen, but sadly, not during my visit.

To me, this only makes the search more exciting. I am already planning my next trip, in early 2021, to this bird-watcher's paradise. I will stay longer this time, and like Richard Thorns I will travel to more remote areas near the lake to seek out the rarer birds -- the Sarus crane, Baer's pochard and the two species of vultures. I may even need to travel by elephant.

I have been a bird-watching enthusiast for decades, after spending a winter in Antarctica and seeing many bird species there. Myanmar's Indawgyi Lake is a different challenge, but even if the pink-headed duck continues to elude me, it will be rewarding to see close-up again the many species of birds in this superb wetland, and a welcome challenge to find the rarer ones.

Seeing the many species of birds at Indawgyi was a rare and enlightening experience. More importantly, perhaps, my trip showed clearly that the memory of R. caryophyllacea lives on, its tragic history inspiring conservationists whose aim is to prevent other endangered birds from suffering the same fate.