A hipster road trip through China in the year of COVID Xiao Mo and her husband A Hou and the specially rigged camper van they are using to explore China's Highway 318. "This route goes through 30 degrees north latitude," says A Hou. "As I am turning 30 this year, we thought it would be a special way to celebrate." (Photo courtesy of Xiao Mo and A Hou)
LIN WANG, Contributing writerOctober 19, 2020 08:00 JST | China
CopyCopied

SHANGHAI -- Waking up recently to the sound of heavy rain drumming down on her camper van, Xiao Mo opened the curtain onto a vast green wave of wheat. Stretching as she breathed in the fresh air, Xiao Mo broke into song.

"Will I disturb the rabbits sleeping there?" Xiao Mo joked with her husband A Hou, who was already preparing coffee. Since August, the couple have been driving along China's National Highway 318, perhaps the most scenic route recommended by the Chinese National Geography magazine.

Beginning in Shanghai and going all the way through to the Tibetan capital Lhasa, Highway 318 passes across the diverse landscapes of China's wild west, taking in cities including Suzhou, Hangzhou, Wuhan, Chongqing, and Chengdu. "This route goes through 30 degrees north latitude," says A Hou. "As I am turning 30 this year, we thought it would be a special way to celebrate," he said, describing how the couple came to name their journey the "Rolling 30."

In Asia, where turning 30 is seen as the moment life starts to get heavy, the name "Rolling 30" hints not only at a seemingly cool lifestyle but the burning desire to experiment. "Rolling also means the camera rolls," smiles A Hou, who holds a Master of Photography degree from London's Central Saint Martins.

On A Hou's birthday in February, the couple bought a freight van and set about transforming it into a multifunctional camper van. Cute and colorful, in the style of a Lego set, guests are greeted by the couple's friendly "white dog," which also doubles as a night lamp. 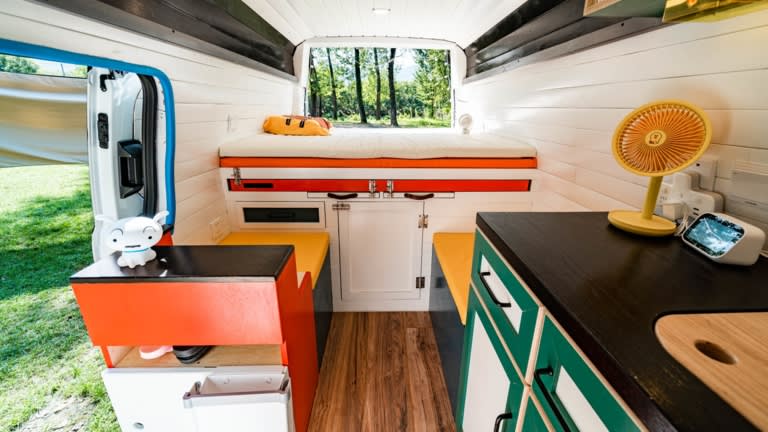 Inside the van, where A Hou says the bed board is more like a blank photographic paper. "When friends visit our van, they leave some words or draw on the board. It feels like we sleep on the best wishes from everyone," he says. (Photo courtesy of Xiao Mo and A Hou)

"Our bed board is like a blank photographic paper," says A Hou. "When friends visit our van, they leave some words or draw on the board. It feels like we sleep on the best wishes from everyone." It's this kind of goodwill, he adds, that makes for a sound sleep and a safe journey.

Xiao Mo's favorite space in the van is the "window" between the driver's cabin and the living area, decorated with a red and white curtain. "It is like a magical movie curtain," said Xiao Mo, a film studies major. "Whenever I lift the curtain, the scenery is changing. Though the van has a toilet, it lacks a shower. But A Hou seems relaxed when it comes to bathing. "We can shower in the highway service area or bathing centers. Sometimes we spend a night at a local friend's home and shower there."

A Hou met Xiao Mo at the Communication University of China in 2007. After inviting her to a performance by his band in Houhai -- Beijing's lake district known for its bustling nightlife -- they later found shared interests in music and movies over a ceramic jug of Beijing-style yogurt.

After graduation, A Hou chose pragmatism over art and became a computer programmer. Their lives really began to change during their 2014 honeymoon to Japan, when A Hou's efforts to capture every romantic moment became a hit on social media. When A Hou began his master's in photography in 2016, Xiao Mo started running their WeChat account "xiaomoyuahou." 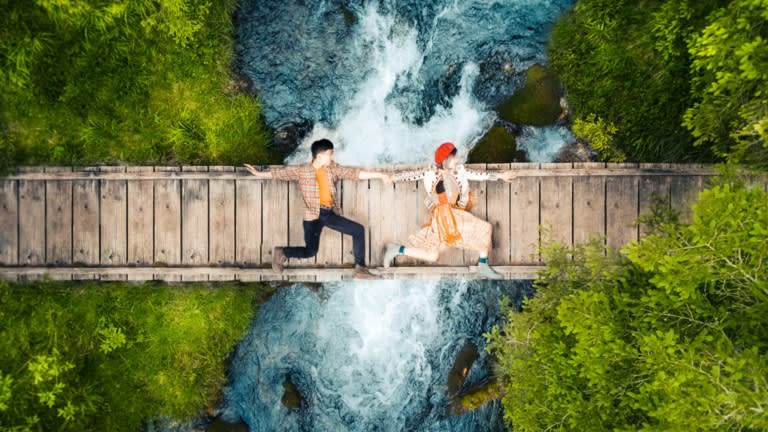 Xiao Mo and A Hou became a social media sensation in China during their 2014 honeymoon to Japan. Their series titled "lying all over the world with you," which depicted the couple in some of the world's most breathtaking landscapes, was a smash hit. (Photo courtesy of Xiao Mo and A Hou)

From "diving" in Morocco to finding forest fairies in Switzerland, the couple's creative imagination and colorful style have won them more than a million fans on Weibo, China's version of Twitter. A 2018 collaboration with the drone company DJI led to the creation of a smash hit series titled "lying all over the world with you," which depicted A Hou and Xiao Mo lying in some of the world's most breathtaking landscapes.

"A Hou always checks the shooting location first," Xiao Mo says. "When he is concentrating on setting up the equipment, I can feel his wish to capture our fleeting state and make it an eternal memory. He looks most handsome at that moment."

When it came to "Rolling 30" the couple timed their departure date with Qixi -- China's romantic festival, which fell on Aug. 25 this year -- driving to a coastal park on the outskirts of Shanghai to capture the Qixi sunrise, which ended up being obscured by the rain.

One of the most interesting aspects of the journey, says Xiao Mo, has been filming the unexpected. "We plan to reach Tibet in December. But we are not sure how long it will take us to arrive there, nor what will happen along the way," says Xiao Mo, emphasizing the Chinese word weizhi (meaning "unknown") for what makes travel so intriguing. 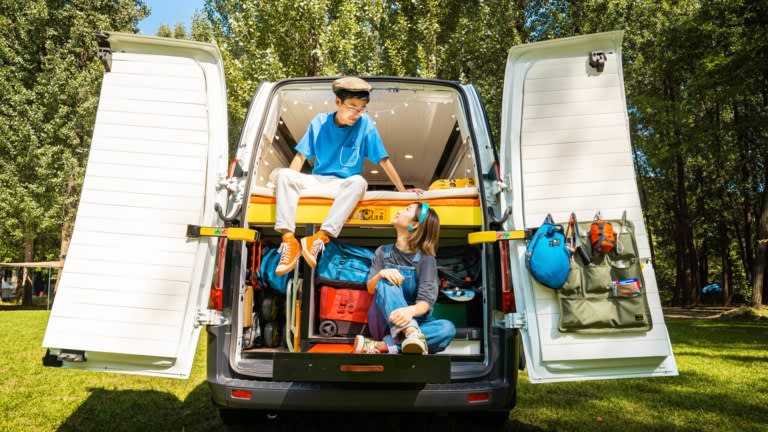 Perhaps China's best-known traveling couple, Xiao Mo and A Hou's "Rolling 30" tour of China's Highway 318 will take them all the way from Shanghai to Tibet. The most interesting aspect of the journey so far, says Xiao Mo, has been filming the unexpected. (Photo courtesy of Xiao Mo and A Hou)

Their van decorated with sunflowers as they set out on the road from Shanghai, Xiao Mo joked that they were living the dream life once described by the Chinese poet Haizi: "May you enjoy happiness in this earthly world. I only wish to face the sea, with spring flowers blossoming."

While COVID-19 has disrupted many people's plans to travel abroad, it had the reverse effect on this couple, stimulating their desire to explore China's insides. "More and more fans told us that they want to see domestic travel, something that is close to home and fun to discover," A Hou says.

On their way from Shanghai to Suzhou, they discovered Yangchenghu, known as "China's most beautiful highway service area." Inspired by the traditional architecture style of the southern Yangtze River region, its white walls and black tiles resemble a Chinese ink wash painting.

Visitors stepping inside find themselves suddenly in a dream town, complete with bridges and waterways. The garden, with its pavilions, rocks and lotus flowers, often forces people to remind themselves that they are still actually in a highway service area. There is even an art zone hosting China's first-ever highway contemporary art exhibition.

"If you stop over here, you may end up going back home two hours late," Xiao Mo jokes in the couple's vlog. "China is so vast and diverse. There are big differences from north to south and between east and west. As a northern Chinese, I am delighted to see the sea, and the tea plantations," says Xiao Mo. 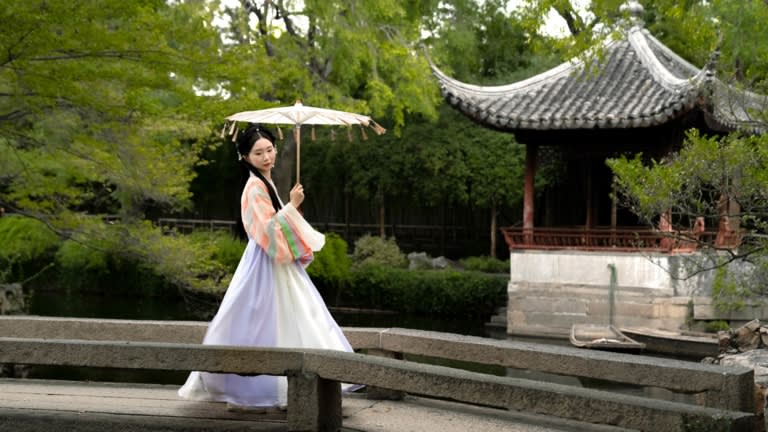 Xiao Mo in traditional costume at Zhuo Zheng Yuan. A UNESCO World Heritage Site and Suzhou's most famous classical garden, it has more than 500 years of history. (Photo courtesy of Xiao Mo and A Hou)

At a store in Suzhou renting hanfu traditional clothing, Xiao Mo had the chance to dress as a southern girl from ancient times, complete with traditional hairstyle, a silk fan, an oilpaper umbrella and a bamboo flute. Her Suzhou look complete, Xiao Mo visited Zhuo Zheng Yuan, a UNESCO World Heritage Site and Suzhou's most famous classical garden, with more than 500 years of history.

"I saw it in a textbook when I was a child. But when I saw it with my own eyes, I felt proud of being Chinese," Xiao Mo says. "That's what I enjoy most when traveling inside China, the cultural identity."