A lesson in globalization from the Spice Islands 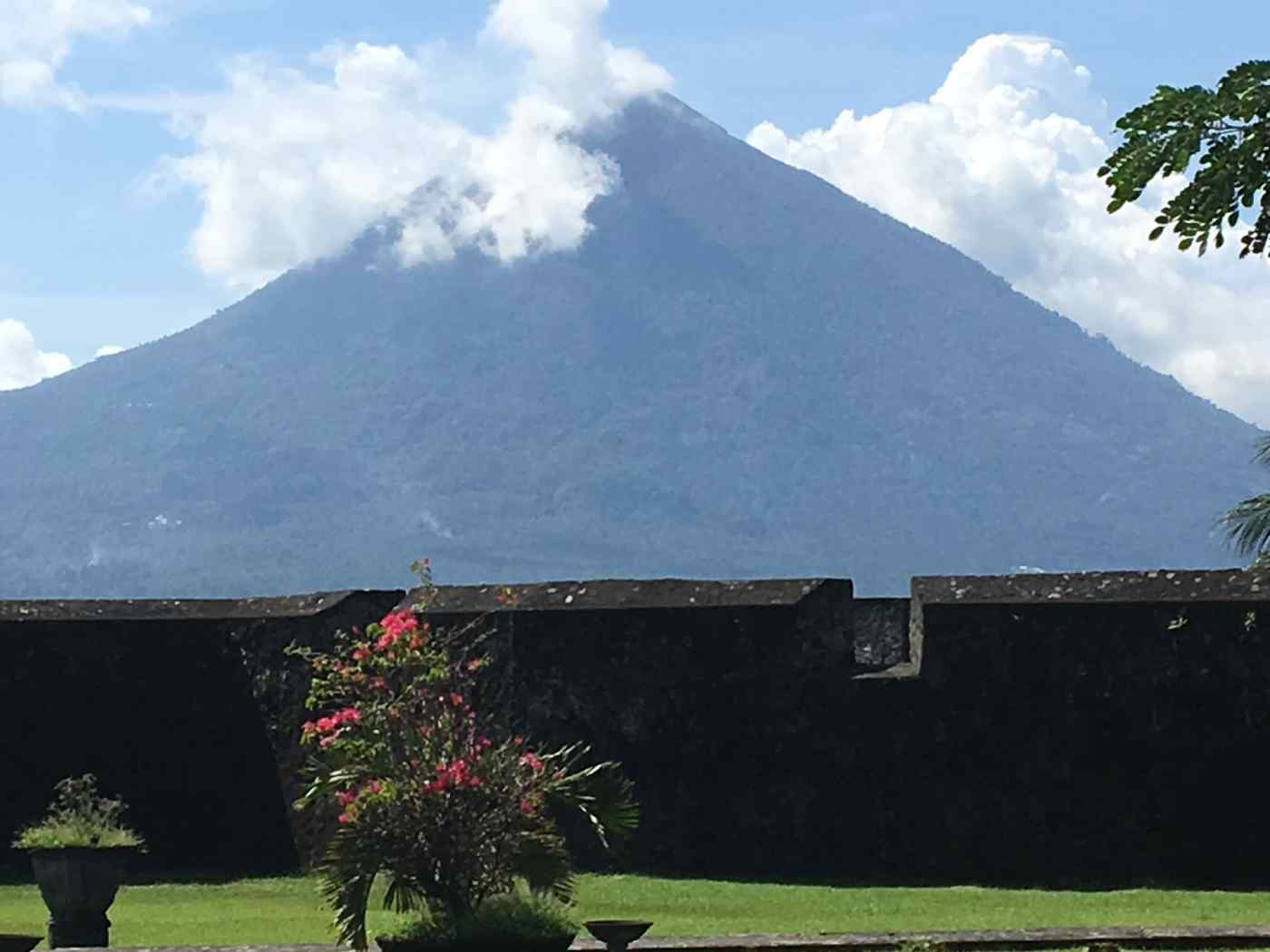 TERNATE, Indonesia -- Nearly 160 years ago, the naturalist and professional beetle-collector Alfred Russel Wallace dispatched a momentous letter from Ternate, then in the far-eastern reaches of the Dutch East Indies, now part of Indonesia. Its arrival three months later at Charles Darwin's residence in England was a bombshell for Darwin, who had been wrestling for decades with his theory of evolution. 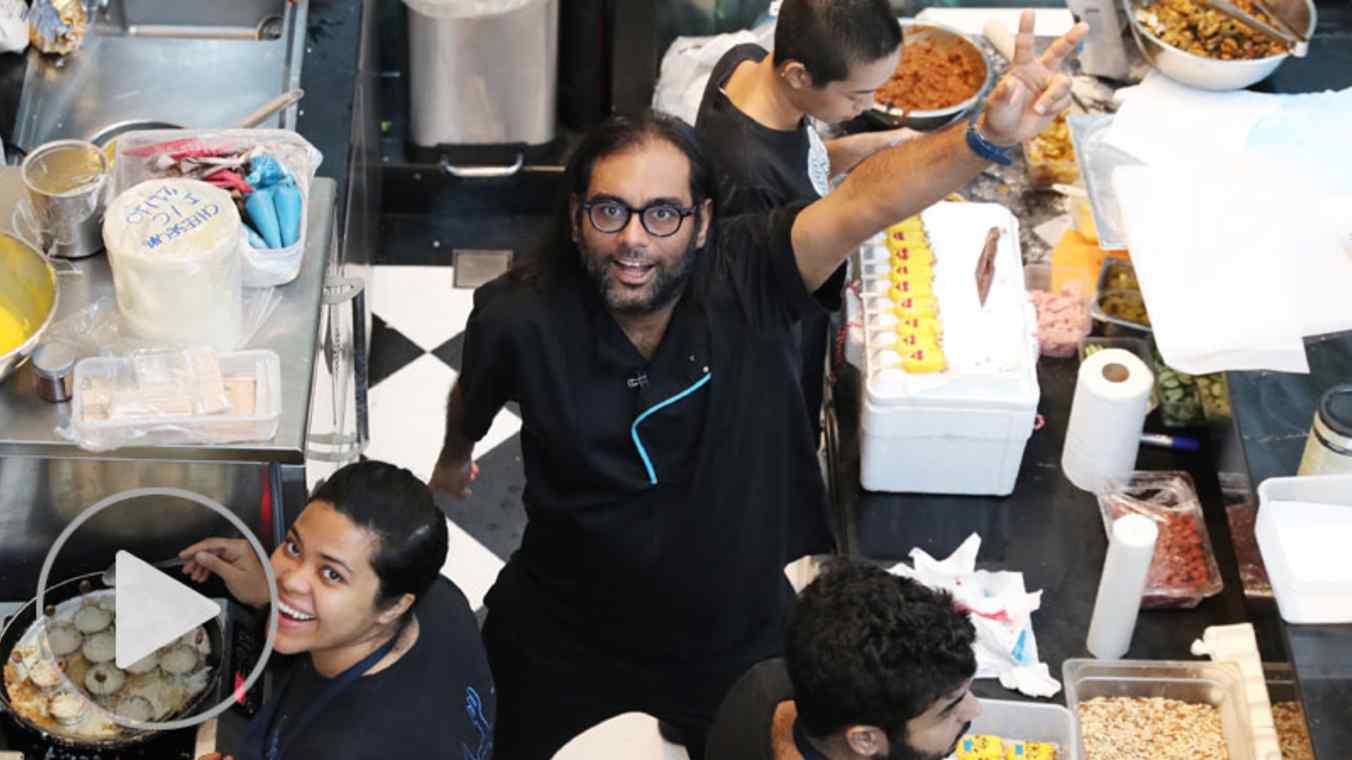 Asia's 'No. 1' chef Gaggan relocating to Fukuoka from Bangkok

Wallace's carefully argued five pages, "On the Tendency of Varieties to Depart Indefinitely From the Original Type," set out the answer to the conundrum: natural selection or survival of the fittest? His theory, arrived at in a malarial fever, explained why variants in offspring did not necessarily revert to their parents' form. Different species could emerge over time, always related to -- but distinct from -- an earlier species.

Did this complete the missing piece of Darwin's theory, or had the two reached the same conclusion independently? Precedence is disputed to this day, but what remains clear is that while earning an uncomfortable living collecting specimens in the tropics Wallace had independently developed science's accepted story of evolution.

Wallace's paper and some incomplete writings by Darwin were jointly presented in 1858 at the Linnean Society of London, the world's oldest active biological society, with equal credit given to the two men. Wallace's letter forced Darwin to develop and articulate his long-standing views, with the publication 15 months later of his famous book "On the Origin of Species."

For the rest of the 19th century, the revolution in evolutionary theory was attributed to both men. Today, everyone knows of Darwin, but Wallace is better-known for the eponymous Wallace Line -- which separates European-type flora and fauna (to the west), from Austronesian (to the east) -- than for his contribution to the story of evolution.

Today, Ternate looks like the land that time forgot, its quiet bustle confined to the postcard-beautiful coastal fringes of Mount Gamalama, whose overbearing presence dominates what was once a vital part of the Spice Islands -- a European name for the Moluccas, now the Indonesian provinces of Maluku and North Maluku. What may have been Wallace's rented house stands ready to receive tourists, but they are few and far between. A new mosque rises above the low-slung town, minus two of its four minarets, which collapsed in a recent earthquake.

The stone skeletons of four substantial forts bear witness to a turbulent past. Ternate was the legendary source of some of the spices that Portuguese sailors set out to find in the early 16th century. Fragrant cloves grew here, and the sultan of Ternate exercised sovereignty over the Banda Islands to the south, then the world's sole source of nutmeg.

For centuries, Arab traders had brought these spices to the Middle East, and Venetian middlemen had taken them onward to Europe, charging a huge markup. When the Portuguese discovered the trade route to the East around Africa's Cape of Good Hope, the way was open for them to collect their own spices directly from the sultan, with whom they had reached a treaty. They went on to establish a trading entrepot at Malacca (now Melaka) -- the key to the spice trade -- on the Malay peninsula early in the 16th century. "Whoever is Lord of Malacca has his hand on the throat of Venice," proclaimed the 16th century Portuguese writer Tome Pires.

But directly commanding the source of the spices was better than a deal with a fickle sultan -- hence the battles for possession of Ternate and the other Spice Islands during the next several centuries as the Spanish, Dutch and English fought for influence and cargoes. The surviving commander of Ferdinand Magellan's pioneering voyage around the world passed through the area after the great Portuguese navigator was killed in the Philippines in 1521, as did the English privateer-hero Francis Drake half a century later.

Here, certainly, was a very early and fully operational manifestation of international integration, embryonically related to globalization. We would recognize it today. Here was the tenuous but well-developed supply chain, extended all the way from Banda to Amsterdam, via numerous ports and middlemen. It was administered with brutal efficiency by the Dutch East India Company -- known as the VOC for its Dutch initials -- a forerunner of today's multinational corporations. The VOC issued shares and had a widely recognized logo. 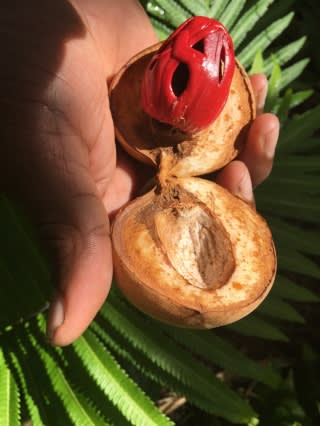 Nutmeg with its bright red aril, known as mace, formed the basis of Ternate's earlier riches and ultimate decline. (Photo by Stephen Grenville)

The company's administrators were linked through regular and detailed reporting and accounting. Production was brought together in plantations and processed in "factories" by incentivized profit-sharing partners. Near-subsistence agriculture was replaced with scale and quality control. Customer feedback was relayed to producers, who might be told, for example, that "small nutmegs are of no value."

This mighty machine produced 3,000 tons of nutmeg annually, and transported it across hazardous waters to the burghers of Holland and the rest of Europe's spice-hungry upper classes.

One key characteristic of the Dutch trade serves as a reminder that globalization is not necessarily the same as the "free market" explained in economic textbooks. The central organizing principle of this Dutch trade was that it was a government-backed monopoly, in the form of a royal charter.

This involved not only fighting opposing colonial powers and concluding territorial deals such as the Treaty of Breda in 1667, which included the exchange of New York's Manhattan island for Run -- a tiny British possession in the Banda Islands -- but also the elimination of native populations that had not joined the Dutch supply chain.

This last policy was sometimes implemented by mass executions, bordering on genocide, while at other times, the natives fled to safer islands. Whatever the means, the outcome was the same: a Dutch monopoly. As has remained true of monopolies ever since, the organizers received the profits, not the producers.

The days are long gone when this sort of behavior was condoned, although as recently as World War II there were shocking atrocities in the islands. Forced removal of inhabitants and their replacement by imported slaves is no longer standard business practice. But businesses still crave both monopolies and constraints on competition. The most favored businesses are those that have natural monopolies or are protected from competition by government regulation.

Today, network externalities (being the dominant player in an industry in which technology offers an advantage) and having "first-mover advantage" are the keys to business success in many industries, notably information technology. These companies are highly valued because investors believe that they will retain continuing dominance of their sectors.

At the same time, modern trade treaties contain elements of monopoly. Our ubiquitous "free-trade" agreements act as a restraint on trade with parties excluded from deals. Multilateral treaties, such as the unachieved Trans-Pacific Partnership, lay down behind-the-border rules that benefit some parties at the expense of others in areas such as IT, environment and labor requirements. Companies with well-entrenched supply chains often deter potential competitors through exclusive deals with component suppliers.

Of course, this is a long way from the brutal restraints on competition practiced in the 16th and 17th centuries. But Indonesia's Spice Islands might ruefully contemplate how, when they got rid of the Dutch monopoly, free trade removed the source of riches before the traditional owners of the islands could impose their own monopoly on exclusive products, such as regionally branded nutmeg and cloves.

Instead, the colonialists (especially the British) took the skills and technology of spice growing to other parts of their own empires. Nutmeg cultivation so dominates the Caribbean island of Grenada that the nation has put the fruit on its national flag. Meanwhile, the fabled Indonesian Spice Islands have fallen back into genteel poverty.