A new generation of renegade Vietnamese chefs breaks through

Innovative cuisine movement is firing shots being heard all over Asia 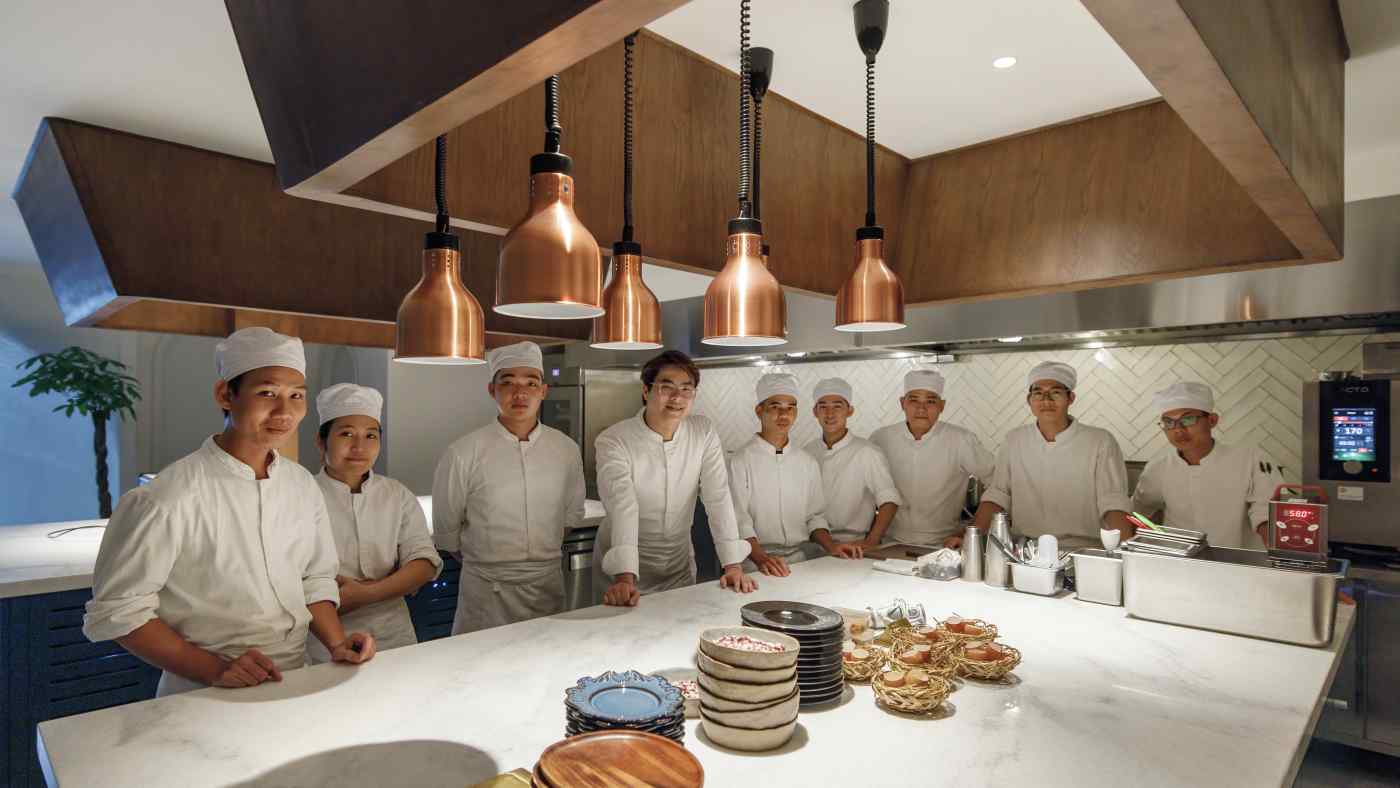 Hanoi-born chef Hoang Tung, center, leads the kitchen staff at the maverick high-end restaurant A by Tung. Located in the hipster-gentrifying Tan Dinh ward, Tung's restaurant exemplifies the new generation of Vietnamese chefs who are daring to reconceptualize the country's culinary traditions, with a side of their own personal histories and experiences. (Photo by Mervin Lee)
PAVAN SHAMDASANI, Contributing writerMay 26, 2021 08:00 JST | Vietnam
CopyCopied

For the first time in its decadelong history, Asia's 50 Best Restaurants list shone a spotlight on Vietnam, ranking contemporary Ho Chi Minh City eatery Anan in 39th place and formally acknowledging it as the country's most innovative restaurant.

For those living in what's colloquially known as Saigon, the recognition was long overdue. As far back as the turn of the millennium, foreign-raised Vietnamese displaced by the war were returning to the country, instilling every facet of its most cosmopolitan city with newfound internationalism. Nowhere was that more obvious than in the food and beverage scene.

The new cuisine was dubbed by Anan's chef-owner, Peter Franklin, one of the returnees who grew up in the U.S. and moved back to Saigon in 2016, setting up shop on a wet-market street in the city center. Here, he has elevated what was literally on his door doorstep using decades of fine dining experience: consomme-style pho, banh xeo tacos, French dip banh mi.

"Cuisine moi reflects my vision of a new Vietnam that remains deeply respectful of history and traditions, yet equally progressive and international in outlook," Franklin said. "The dishes we do, the taste and flavors are always Vietnamese, but it's the techniques that are changing. Most Vietnamese chefs have been afraid to take that on, but we've opened the door, so it's encouraging a new generation." 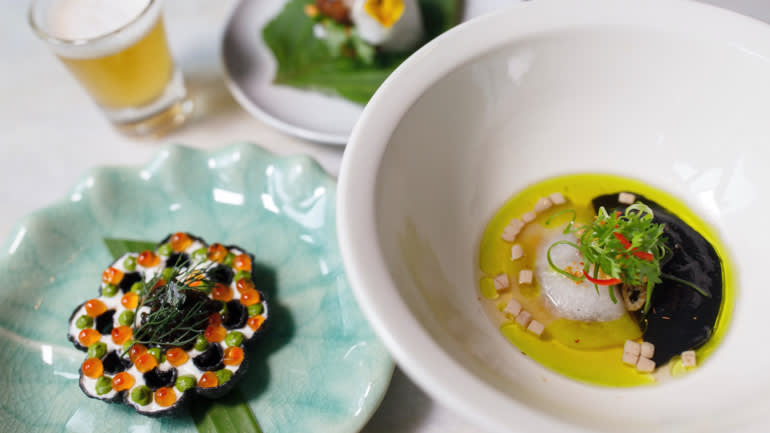 He is right about that. Almost immediately after opening its doors, Anan became a beacon for up-and-coming renegade chefs across the country, with the next five years seeing a cluster of fresh restaurants that took up Franklin's tenets -- daring to reconceptualize Vietnam's culinary traditions, with a side of their own personal histories and experiences.

Nowhere is that better exemplified than at one maverick high-end restaurant, A by Tung, located in the gentrifying hipster ward of Tan Dinh. Its 27-year-old chef-owner Hoang Tung serves just one menu: a 20-course tasting selection that changes according to his mood as well as seasonal ingredients, priced at an eyewatering-for-Vietnam $85 a head.

"The food is contemporary but inspired by the traditional," said the Hanoi-born chef. "I'm not innovating, I'm re-imagining, taking my inspirations from around the world and combining it with my Vietnamese memories, ingredients and techniques for an overall experience. For me, cuisines don't make sense -- there shouldn't be borders in food. It's like conducting a symphony -- inspirations come from near and far."

Inasmuch as his upbringing plays a part, Tung's culinary concept and interiors are equally inspired by his days working at Michelin-starred restaurants in Finland and Denmark. And it is a bold move, serving a costly, ever-changing menu that plays like Vietnam's answer to Copenhagen's Noma -- but one that is starting to pay off: the chef's original restaurant in Hanoi, Tung Dining, recently ranked 98th on the extended Asia's Best Restaurants list.

"Our goal has always been to appeal to every taste, both foreign and Vietnamese. And that's why our restaurant has not only survived, but thrived," said Tung. "My view is that there's opportunities in challenges, and the possibilities are only limited by your mind."

That idea of challenging expectations, consequences be damned, is at the heart of the new Vietnamese cuisine movement -- and it sometimes means taking a step back to reconsider your roots. At Esta Eatery, also in Tan Dinh, chef-co-owner Francis Thuan is looking further afield for his inspirations. Top: "My family is from all over the country, and I've traveled north to south, learning as much as I can about Vietnam's cuisine -- the ingredients, the terroir," said Esta Eatery chef and co-owner Francis Thuan. Bottom: From smoked eel to Hmong-style pork jowls to a signature dry-aged duck, Esta's experiments contrast as well on the plate as they do with its warm, contemporary setting. (Photos by Mervin Lee)

By personally traveling across the country, especially amid COVID restrictions, Thuan shows he is dedicated to finding the best produce Vietnam has to offer. And while the ingredients he uses aren't always familiar, that doesn't make them any less local -- on the contrary, they're a testament to the rich, varying landscapes of Vietnam

"My family is from all over the country, and I've traveled north to south, learning as much as I can about Vietnam's cuisine -- the ingredients, the terroir," said Thuan. "I even spent two weeks living with the Hmong, an ethnic mountain tribe up north, learning how their cuisine culture differs from the Vietnamese. I'm using all that to make something new."

From smoked eel fished from a national park to pork jowls Hmong-style to a 14-day dry-aged duck that's the restaurant's signature -- Esta's experiments contrast as well on the plate as they do with its warm, contemporary setting. The atmosphere here wouldn't be amiss in New York or London, presenting a comfortable setting before surprising diners' culinary minds. The medium is the message, in a way -- and others are starting to catch on.

Just a block away from Saigon's historic Notre Dame cathedral, up some winding stairs in an old prewar French colonial building, Nous is the newbie of the group, opening its doors last November as a self-proclaimed "capsule restaurant." In reality, it's somewhere between a Japanese omakase restaurant and a Hong Kong private kitchen, seating just eight at its counter and serving a six-course menu that's obsessively revamped every couple of weeks.

"My earliest childhood memories were in the kitchen with my mom, chopping vegetables, tasting soups. I've always had a passion for it," said owner Daniel Nguyen, a returnee who grew up in Canada. "What drew me back was the amalgamation here, that charm of having a street food spot just steps away from a luxury restaurant."

Nous is an attempt to seamlessly blend those worlds. The chefs are as reverential to local ingredients as others in the movement, riffing with creative flourishes on time-honored street food -- but it's the restaurant's setting that might be the most audacious. In a city of ample space and reasonable rents, they've opted for a small hole-in-the-wall that somehow feels exclusive yet laid-back, with diners literally rubbing shoulders with fellow diners as the chefs orchestrate. 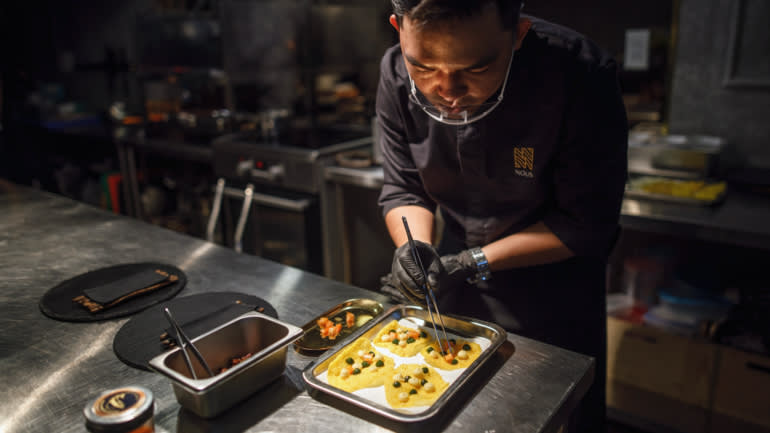 Top: Just a block away from Saigon's historic Notre Dame cathedral is Daniel Nguyen's Nous, a self-proclaimed "capsule restaurant" that opened its doors last November. Bottom: "My earliest childhood memories were in the kitchen with my mom, chopping vegetables, tasting soups. I've always had a passion for it," said Nguyen, who grew up in Canada. (Photos by Mervin Lee)

"What really changed here was COVID -- established places were shutting down, and there needed to be a push from the mid-end to do new things and get people eating again," said Nguyen. "That's where we saw an opportunity, establishing a relationship with our customers that's very intimate and pricing it at the growing middle-income bracket."

It all might be a portent to how the city will evolve -- smaller, more personal, high-end that's affordably priced and focused on niche cuisines, where anyone with some kitchen experience can become the next star chef. Franklin thinks it's likely: "The new cuisine will get more specific -- Hanoi dishes, Da Nang dishes -- it'll focus from a national level to a regional level. It'll be exciting to see things get more personal and defined by the chefs themselves."

Tung isn't so sure, predicting the scene will become more internationalized, akin to neighbors Singapore and Bangkok: "Everyone with a guitar wants to be Elvis, and everyone with money wants to own a restaurant. Things will only grow from here, and famous global chefs will soon expand into Saigon. The standard will become higher and harder to compete."

He might be right. With Saigon's scene currently inverse to most metropolises, with inspiring restaurants opening every month while international cities see innumerable COVID closures, the city could be seen as safe harbor for foreign chefs looking to grow their empires -- risking the local charm that makes the city so unique. But wherever it goes, one thing is undeniable right now: "It's a very exciting time to be in Vietnam," Franklin said.