Souvenir shops line the area around the cave in Thailand where a boys soccer team was trapped for 18 days last year. The T-shirts depict a diver who died in the resuce. (Photo by Marimi Kishimoto)
MARIMI KISHIMOTO, Nikkei staff writerSeptember 26, 2019 04:37 JST | Thailand
CopyCopied

CHIANG RAI PROVINCE, Thailand -- The dramatic rescue of a boys soccer team from a cave in Thailand last year has turned an inconspicuous enclave of pineapple fields into a tourist hot spot, drawing well over 1 million visitors since the 18-day ordeal captured headlines worldwide.

Souvenir shops have sprouted in the cave area of Chiang Rai, the country's northernmost province near the border with Myanmar, selling T-shirts depicting Tham Luang cave and the rescuers.

The northern province likely will enjoy renewed attention in the coming months. The motion picture "The Cave" depicting the rescue hits theaters in November. Netflix has announced plans to produce its own original drama based on the event.

"This shop opened three months ago," a 35-year-old attendant said. "Many people come on weekends."

The rescue of the 12 members of the Wild Boars and their adult coach in June and July 2018 involved personnel from 22 countries. Now, the cave is attracting unprecedented attention from visitors.

About 38 million people visit Thailand each year, but most go to the capital, Bangkok, or the southern beach resorts. For Chiang Rai, the cave offers an ideal tourist attraction. 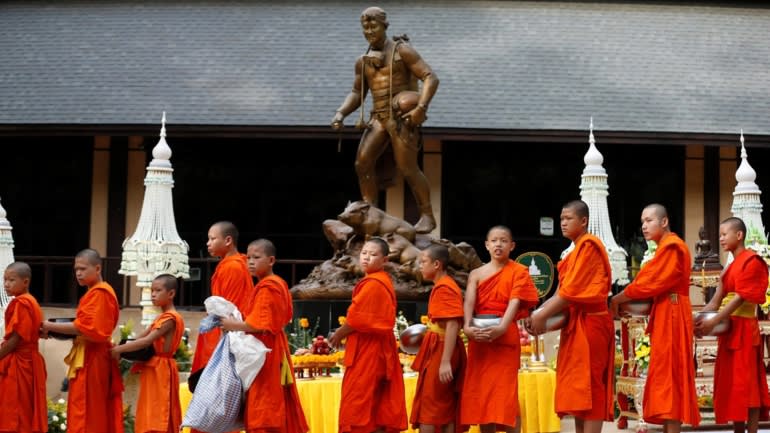 Buddhist novice monks stand in line in front of a statue commemorating Saman Gunan, a Thai Navy SEAL diver who died during a rescue operation at Tham Luang cave.   © Reuters

"Tourists used to number 5,000 in a year, but the traffic jumped to 1.4 million," said Kawee Prasompol, the state park official in charge of the cave. "The response was more than anticipated."

Kawee said he hopes the site to be upgraded to a national park next year.

A statue of Sgt. Maj. Saman Gunan, the retired Thai Navy SEAL who died during the rescue mission, stands near the cave entrance. A nearby memorial center features a virtual cave, as well as oxygen tanks used by the rescuers. Tourists can pose for pictures by a large mural depicting the rescuers, titled "The Heroes."

One tourist from Thailand's Pattani Province, located a two days' drive south, came with a 9-year-old son to take pictures of the statue.

"He's a hero," the visitor said. "The rescue really moved me."

The park is considering allowing people to enter Tham Luang cave itself.

"We hope to open the cave to the general public by the end of the year once safety measures are fully in place," Kawee said.