YEREVAN, Armenia -- The international group of young adventurers who set up operations in a disused building on the outskirts of Dilijan National Park, a two hours' drive north of the Armenian capital, do not quite look like game-changers.

Indeed, they live communally, don simple outdoor gear and bunk down in tents at night, but that is all it has taken to kick off the ambitious Trans-Caucasian Trail (TCT) project, a long-term scheme set to change the face of adventure tourism in the westernmost fringes of Eurasia.

Officially launched in early 2017, the TCT's final goal is to build 2,000km of world-class, long-distance hiking and mountain-biking trails from the Iranian-Armenian border to the Georgian-Turkish frontier in northwestern Caucasus. When completed, visitors will need about three months to complete the full circuit. "All potential local sponsors and authorities have their eyes on us right now, to see if we will succeed or fail, and if we put our money where our mouth is," says Tom Allen, 34, a respected British bicycle-touring blogger and adventurer. After gallivanting the world on a saddle for years while establishing online businesses and directing four short movies and one award-winning feature film -- "Janapar: Love on a Bike," which recalls the story of how Allen met his Iranian-Armenian wife -- he is now the TCT's "explorer-in-chief." Despite the countless adventures under his belt, Allen talks softly and modestly, exuding the selfless charisma of those who have found their place in the world.

The TCT is still in its inception: While Allen and his team just started trail-building in Armenia's Dilijan National Park, another team led by fellow American Paul Stephens has already worked in northwestern Georgia's Svaneti region for the past couple of years. "It could take more than a decade to see the two trunks ultimately connect into an organic Trans-Caucasian Trail," Allen told the Nikkei Asian Review.

Allen started off with a pioneer project, the Trans-Caucasian Expedition, after receiving a generous annual grant from London's Royal Geographic Society in partnership with Land Rover in 2016, which provided him with a 4x4 vehicle to commence trail-scouting and building operations. "Professional trail-building has never been attempted in Armenia before, so there's no cultural understanding of what it is or why it's so important, and obviously no existing workforce," he said. But against all odds, last summer Allen and his group managed to open the TCT's first 100km stretch, which is equal to about four days of hiking. 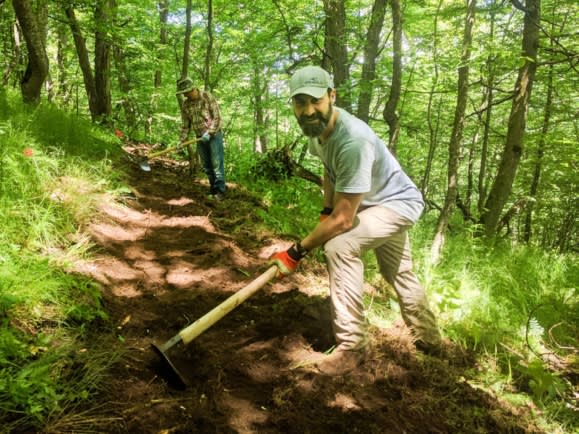 The trail is manually prepared and flattened by a team of international volunteers. (Courtesy of Trans-Caucasian Trail)

"We had to find some very progressively minded funders and partners who don't mind rocking the boat and trying something unprecedented. At the same time, we had to build trail-building capacity in Armenia from scratch." Allen cites the support of the Caucasus Nature Fund, which nurtures small infrastructure projects in protected areas of the Caucasus, and the Hovnanian Foundation, which is currently focusing on developing hiking in Armenia. "We haven't pursued corporate sponsorship yet, because I think it's too early," he noted.

Sponsorship or not, it takes a great deal of willpower to isolate oneself in the woods without a phone signal or electricity for weeks on end. Three people run the Trans-Caucasian Trail operations directly on the ground, helped by rotating groups of international volunteers who apply online and travel to Armenia to join the resident trail-building crew for periods of up to two weeks.

In the wild, Allen acts as the trail development coordinator, deciding on where the trail should take people. He is helped by a trail-building crew leader who oversees the daily progress, and a camp manager, who looks after the work camp's maintenance operations. "We live out in the field from Monday to Friday. A typical day involves getting up at 6 a.m. for breakfast and a 7 a.m. start for the work site, usually a few minutes' hike away," explains Allen. "We work until 4 p.m. ... then head back to the camp for plenty of rest in the late afternoon and evening. Chores such as cooking, washing up, water and firewood collection are shared among the team on a daily rota. We live simply, work hard, and spend our evenings around the campfire". Preparing for a day of hard work in one of Dilijan National Park's idyllic mountains. (Courtesy of Trans-Caucasian Trail)

The international volunteer program is also an important source of revenue, which, Allen explained, "can be invested independently in growing the movement, when our other funding is tied up in results-based grant contracts, and is relatively inflexible." And given that volunteers play a crucial role in the project, they are not only sourced from the global online community of adventurers who follow Allen's websites, but put particular priority on young and willing locals who want to shape their own future.

"The trail will be ultimately maintained by people on the ground here, not by a band of idealistic foreigners," said Allen. "It's crucial that they feel a sense of ownership from the start, as I have no intention of keeping the knowledge a secret. In the end, the more trails, the better for the region. I'd also like to see more organizations working on our project in the future."

So far, locals have received the Trans-Caucasian Trail favorably, but there has also been pushback from some local hiking experts who, Allen said, believe the region already has perfectly good trails. "In truth, some trails do exist; but they are steep, muddy jeep tracks shared with 4x4s and cows ... absolutely not suitable to most foreign hikers. If these trails were good enough, Armenia would already be a prime hiking destination," Allen said. The improvement of barely existing tracks will help create a future for adventure tourism in the Caucasus. (Courtesy of Trans-Caucasian Trail)

Conceived along the mountain paths that shuttled goods, cattle and shepherds between Armenia and Georgia for centuries, the TCT in the future could as well branch off to the east into Azerbaijan, and to the south into the mountains of northern Iran. "The development of the trail in these regions will depend on finding another Paul or Tom who makes it his or her life's work to bring the trail into existence there," Allen said. "But these people don't seem to be forthcoming at this point."

Allen is, in the meantime, laying plans for a new section of the TCT, to be built in the summer of 2018. The arrival of these new hiking trails will help open new parts of Armenia and Georgia to international tourists, who are already trickling in. Besides European travellers, Asian visitors are also making their way to Armenia thanks to a direct AirAsia flight from Kuala Lumpur to Tehran.

"The trail infrastructure will no doubt be used by nonhikers, and perhaps other types of tourism will float into the realm of viability. But think of the Appalachian Trail in the U.S.: More than a million people do at least a day of walking on it every year, yet only a few thousand set out to complete it. I think the TCT will remain relatively obscure but with the potential to spark a great many other immeasurable processes into life. We will never know the true impact until we get to the end of this adventure."